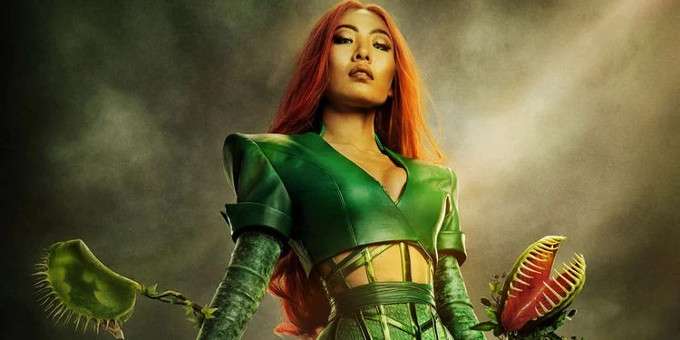 Again, Nicole Kang and Rachel Skarsten playing off each other is the highlight of the episode.

The Poison Ivy costume and make-up is respectable.

While discussing the blood sample Ryan gave them, Jade Jett's scientist employee makes reference to Swamp Thing. This is the first indication that Swamp Thing exists on Earth-Prime in the Arrowverse following Crisis on Infinite Earths.

The only other reference to Swamp Thing in the pre-Crisis Arrowverse was an AR Easter egg tied to the show Constantine, where fans who called the number on John Constantine's business card would hear a voice mail greeting advising them to "try the bloody swamp" if they had called looking for Alec Holland.

Mary uses the name Daphne as an alias. In classic Greek mythology, Daphne was a nymph whom Apollo pursued against her wishes. Her father, a river god, transformed her into a laurel tree to protect her. Apollo made himself a crown of her leaves.

The Poison Ivy infection is said to double in strength every 12 hours.

The perimeter on Alice's tracker nanobots is 15 miles.

Alice's blood type is O negative. This makes her a universal donor, but she can only accept blood from another O negative person.

According to Luke, blood cells can live outside the body for up to 4-6 hours.

The tracker nanites die along with the blood cells they inhabit.

Mary: Why are we in a motor home?
Alice: Oh. Because we wrecked our super-sexy sports car fleeing the GCPD.
Mary: Alice, what did you do?
Alice: Actually, it's not what I did but, uh, if you don't remember, it's probably for the best.

(Mary learns about how she hurt Ryan and Mary as Ivy.)
Mary: Oh god... I'm gonna be sick!
Alice: Oh. Well, you're in luck. Our new ride has a toilet!
(Mary is heard gagging from the bathroom.)
Alice: Trust me, sister. It's nicer than the one in Arkham.

(Ryan is annoyed that Sophie slept with Montoya.)
Sophie: Didn't realize I needed your permission.
Ryan: To sleep with the woman blackmailing me, threatening me with prison? No. Of course not. I am so happy you two found each other.

Batwoman: Luke, I need a direction. I'm all dressed up with nowhere to go.
Luke: Uh, good news, bad news?
Batwoman: Bad news first.
Luke: OK. Mary hasn't used her credit cards and shockingly hasn't posted on Insta, so I don't have a bearing to give you, and we only have 42 minutes until sunrise.
Batwoman: OK. You better hit me with the good news.
Luke: 19 of our trackers are offline, so we're down to 4.
Batwoman: That's the good news?
Luke: I didn't say it was that good.

Alice: I hope this goes better than my last transfusion. Nocturna? You were there.
Mary: Right. You mean when you saved your own skin by siccing that off-brand vampire onto moi by luring her with the fact that I had Desert Rose in my blood, which was only there because you gave my mom the choice between her or me with only one cure between us? Yeah, I remember.
Alice: We've come a long way, haven't we?
Mary: Hmm. You know, for so long, all I wanted was for you to be out of my life. I should just stick an embolism in your IV and finally just be done with you.
Alice: (laughing nervously) Ahem. Heh heh. Or, uh, option "b," You could finish my oil change, and you will never have to see me again.
Mary: Actually, that's what I'm afraid of. Hard to believe, right?
Alice: You don't want to be alone. I know the feeling. But you won't be. I'm gonna stay with you through this whole Mary metamorphosis.
Mary: You'd be a lot easier to trust if you weren't a serial killer.
Alice: A serial killer who hasn't left you, doubted you, or ignored you. Do you really want to be alone right now, or do you want help from the only family you have left?

Ryan meets Marquis Jet for a secret meeting. However, this turns out to be a ruse to allow the Black Glove Society to capture Marquis while his guard is down.

Ryan set up Marquis in order to get a favor from Jada.

The favor turns out to be using Mary's blood sample to develop an antidote that will purge Poison Ivy's control spores from her system.

Vesper Fairchild reports on the apparent return of Poison Ivy following Mary's attack on Batwing and Batwoman in 306.

Sophie learns that Mary has been taken over by Poison Ivy, but the possession only occurs during the day when Mary is in sunlight.

Luke's arm is still in a sling.

Sophie tells Luke and Ryan that she didn't go home the night before, so she has no idea what happened to Alice.

Mary wakes up next to Alice in a motor home.

Alice tells Mary that she fought the GCPD the day before  and their car got trashed, leading her to steal a motor home.

Mary, as Alice, threw her phone into the Gotham River on the way out of town.

Alice still has the AI module for the Batwing suit.

Alice offers to help protect Mary until she masters her new Poison Ivy powers in exchange for a blood transfusion to rid herself of the tracker nanites.

I-15 runs through Gotham City.

Alice is able to throw off Batwoman's pursuit by using her blood to paint messages on various cars.

Mary and Alice begin flirting with various customers in a bar and doing blood tests trying to find O negative people to drain.

The bartender tries to kick Mary and Alice out, finding them creepy, but Mary subconsciously uses her Poison Ivy powers to make the bartender friendly.

Sophie tells Luke and Ryan about how the Mayor's Office is getting ready to go after Mary with full force.

Sophie also tells Luke and Ryan about her one night stand with Montoya.

Marquis escapes from the lab where his mother was going to have him cryogenically frozen.

Ryan and Sophie find Jada Jet after Marquis attacked her.

Marquis goes to Wayne Enterprises looking for Ryan and stabs a security guard to death with a pen that Luke Fox was given by his father.

The pen has an 18-Karat gold nib and a satin lacquer finish.

Marquis claimed that Lucius Fox used to come by his mother's house and they shot hoops in the driveway a few times.

Marquis easily beats up Luke, who only has one good arm.

Alice picks up a man named Jason who is a Gemini with no piercings or tattoos. He turns out to have O negative blood.

Dr. Tuva was the scientist working for Jada Jet who developed the Poison Ivy cure.

Marquis is waiting for Ryan and offers her the antidote in exchange for her resignation as CEO of Wayne Enterprises and all her stock options.

Sophie dresses Luke's wounds and admits her field dressings in the military academy were famously horrible.

Monotya's apartment is over a GC Jitters - apparently a local chain of the CC Jitters from The Flash.

Luke is able to track Mary by using her GC Jitters rewards card, which was used at a GC Jitters outside Metropolis 2 hours earlier.

Alice makes reference to Nocturna from 113.

Marquis calls his mother and tells her to be watching TV at 9 am.

Mary and Alice escape from a police officer who identifies their vehicle as stolen. They hit him with the car, but he rolls under the vehicle and the tires do not go over him.

Ryan catches up with Mary and Alice and offers Mary the cure.

Mary says she doesn't want it.

Ryan and Luke have their security clearances at Wayne Enterprises revoked, leaving them locked out of Wayne Tower and the Batcave. This leaves them with Ryan's costume and the Batmobile.

Mary, now fully committed to being the new Poison Ivy, dons a green costume and watches the press conference with Alice, and they decide he looks like he might be fun.


Location
Brownsville Pub and a motel somewhere outside of Metropolis.

Mary and Alice had a violent encounter with the GCPD at some point between episodes, which trashed their electric sports car and led to Alice stealing a motor home.

Renee Montoya told Sophie Moore that the Mayor's Office is authorizing extreme measures to go after the new Poison Ivy during their night together.


The Bottom Line
A mixed bag, oddly enough. The parts involving Alice and Mary are magic, despite it making little sense that Mary should feel at all conciliatory to her mother's murderer. Yet Nicole Kang and Rachel Skarsten play off of each other so well that it seems quite natural and their bonding is far more interesting than Marquis' Joker act, which is far more predictable and, as a result, boring in comparison to the untouched territory of Ivy as a parasite.
Posted by Starman at 12:29 PM