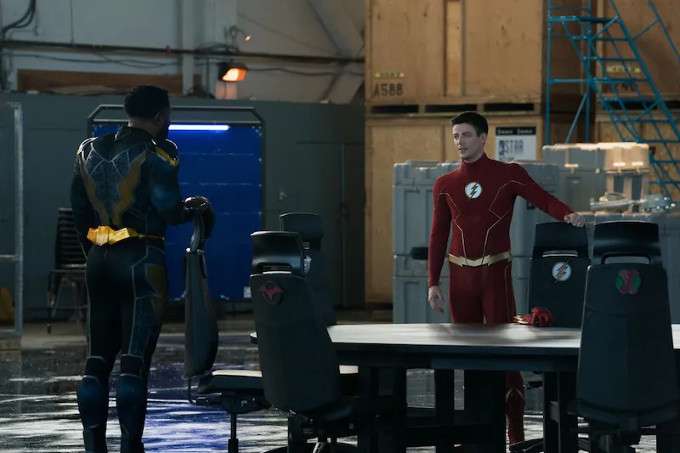 Barry is given seven days to prove that he will not become the villain who threatens the Earth of 2031, but first he must survive the worst day of his life without going mad.

The Armageddon 2001 storyline and Injustice.

Why hasn't the Public Safety Act been evoked anytime in the last four years when weird things were happening at STAR Labs? Or any other lab in Central City? (Presumably Joe West and Cisco Ramon were able to use their positions with the police to steer away inquiries?)

Alex tells Iris, Chester, Allegra and Caitlin that they are the first to discover a Kalanorian. However, a Kalanorian was said to have started a fight in Al's Dive Bar due to the psychic effect of Myr'nn J'onzz's Ta'ar Ka'riq in S315. (It's possible this was changed by Crisis.)

Grant Gustin is the MVP this time around, doing an amazing job of selling Barry's horror at the possibility he might be going mad and making it seem plausible he might be, given everything in his life going bad.

Again, the special effects are some of the best in the show's history.

The idea of a hero becoming a villain after one bad day lay at the heart of the Injustice reality. However, in that reality (set in a series of video games, with comic tie-ins and one animated movie adaptation) the hero who snapped was Superman, rather than The Flash.

The name of Xotar has been used by two previous DC Comics villains. The first was a mad scientist, also known as The Weapons Master, who a super genius scientist from the future who fought the Justice League of America. The second was a New God of Apokolips and loyal servant of Darkseid.

The Arrowverse Xotar is a metahuman telepath/telekinetic and a woman, who bares no resemblance to either of the Xotars from the comics.

This episode reveals that the Arrowverse version of Despero is empowered by the Flame of Py'tar. A remnant of the nuclear energy that created his home planet, the Flame of Py'tar is a mystic power source which made the already formidable Despero even more powerful than he was as a telepath with the strength and durability of a Kryptonian. In the comics, the Flame of Py'tar increased Despero's strength, speed, durability, reflexes and gave him the ability to alter his biomass, shrinking to human-aize or growing even larger. He could also alter reality to a degree, creating physically real monsters rather than illusions.

It is unclear to what degree the Arrowverse Despero's powers come directly from the Flame of Py'tar as he only uses it in the episode to try and kill Barry Allen. It's possible that his shapeshifting from human-form to his true-form is an application of the Flame of Py'tar rather than the shape-shifting technology used by other aliens on Earth (like Brainiac-5) to blend in.

Chester says the radiation scanners in STAR Labs have not been updated in a week.

Chester determines that part of the early detection array that monitors radiation levels inside STAR Labs has become corroded.

Caitlin scans Barry's biometrics after he's possessed by Xotar and determines his amygdala activity and cortisol levels are elevated, yet within normal parameters.

(Despero attacks Barry.)
Barry: I thought we had a truce.
Despero: I thought as much. Your bravery is strengthened by the reassurance you gain from enhanced healing.
Barry: It doesn't mean it hurts any less.
Despero: Pain is the debt we pay for change, and I'm here to change the future. Thanks to this experiment, I now know the force required to kill you when the time comes.
(Barry looks a bit annoyed by this.)
Despero: Oh. I've seen your destiny, Flash. I've watched you use your power to destroy everything and everyone.
Barry: You still haven't told me why I would do this. Huh? What would cause me to turn my back on everything I've sworn to protect?
Despero: Madness. Many times in the past, the pain you've suffered nearly crushed you. But soon, a new despair will befall you. And it will create an unbroken chain of sorrow so great... your mind will crack. And with it, the world ends. You see... your power has recently accelerated. But so too has your ability to descend into madness. Tragedy is coming for you, Flash. What remains to be seen isn't whether or not you'll break. It's when.
Barry: I have seven days.
Despero: I'd worry more about tomorrow if I were you. I don't know the details of what will happen. But I know tomorrow is the beginning of the end. Your end. I've granted you a chance to defy destiny. But I'll be staying close by. As soon as I sense your mind turning mad, I'll find you. Good luck fighting fate, Flash.

Barry: Protecting this city is still our top priority.
Frost: Even from you?

Despero: Crisis and tragedy are like fires, Flash. Some are strong enough to endure them. But others are destined to be consumed by them. Soon we'll find out who you are.

The episode continues immediately from the end of 801.

Despero attacks The Flash to determine if he has enhanced healing powers, so that he will know how much strength is required to deal a death blow to him.

Despero explains that The Flash went insane because of some great sorrow that broke his mind. He also says that tomorrow is the day everything changed.

Despero says he will give Barry a chance to prove himself innocent, but he intends to watch him and kill him the moment he senses the madness within him.

Alex Danvers gives STAR Labs access to the alien database once used by the DEO after setting up a link to the mainframe in the Super Friend's Tower in National City. This suggests that this episode takes place before the DEO was reestablished in the finale of Supergirl (S620)

Alex mentions a computer programmer named Marcus, whom she introduced to Caitlin. He wrote a searching algorithm that runs at light speed.

Alex says she can't find any information on Despero, suggesting he's a big threat if he's stayed off the DEO's grid.

Frost has returned from her vacation.

Reference is made to Barry going crazy while connected to the artificial speed force in 702 that enhanced his cognitive abilities but repressed his emotions.

Caitlin says she ran a bio-scan on Despero while he was in STAR Labs and confirmed that, in addition to his telepathic powers, he has strength and durability on par with a Kryptonian on Earth.

Chester wants to find some way to contain Despero or neutralize his powers. He makes reference to the unit used to contain Bloodwork.

Frost wants to build some kind of weapon to stop Despero.

Iris tells Barry that she's going to stop by Cecile's to help her with Jenna, since Cecile is working on a big case.

Barry is called to the scene of a bank robbery where the security guard had to be hospitalized after having some sort of breakdown. The vault was mysteriously empty.

Barry is confronted by Captain Kramer, who says he needs to hand over his badge.

Barry is informed that he has been suspended pending investigation into federal crimes. Kramer informs him that the DA's office believes Joseph Carver had another mole in the CCPD besides Sunshine and the evidence points to Barry being that mole.
Barry talks with Cecile, who starts planning a wrongful termination suit against the city on Barry's behalf.

Cecile feels another presence in the room with them.

Barry sees Despero but he denies being the presence and says he's only appearing through a psychic manifestation of his consciousness.

Cecile does not see the illusion of Despero.

Despero says Barry's mind has not broken yet.

Cecile sense Despero's energy when he allows himself to be noticed and says it filled the room.

Barry sneaks into the hospital to talk to the guard from the bank robbery. He keeps repeating one word over and over... Xotar.

Caitlin calls Barry and tells him to get to STAR Labs right away because the city is threatening to shut them down over a radiation leak.

The Public Safety Act was passed four years ago after "meta fallout" nearly took out the city. This may be a reference to the new wave of metahumans and meta-tech created by The Thinker's schemes in Season 4.

The CCDBS is the organization taking apart STAR Labs.

The CCDBS orders STAR Labs to be sealed in concrete, demolished and the rubble sent to a nuclear waste site.

Barry gets Gideon to project holograms to block off the areas of STAR Labs used by Team Flash.

Barry erases all the servers in the building, including the one hosting Gideon.

The Flash confronts Xotar at the Central City Diamond Exchange.

Barry wakes up in his apartment, where he is informed he tried to attack Chuck, Caitlin and Allegra.

Frost sets up a med lab at her and Caitlin's apartment.

Chester says he and Allegra can set up a comms/Cortex replacement in his garage.

Despero tells Barry that he is from the planet Kalanor.

Despero claims that he led a band of rebels against an evil despot who took over his world. Both sides suffered heavy losses, but his side won. He elected to spare the despot, who rose again 1000 times worse than before. He spared Despero and exiled him from Kalanor, knowing nothing would hurt him more than losing his home.

Despero came to Earth and adopted it as his new homeworld before Flash destroyed it.

Allegra and Chester are still playing Dungeons and Dragons on the weekend, after Allegra agreed to play one game in 714.

Allegra knows when Chester is bluffing.

Chester is a pacifist and has been ever since his effort to build a replica of Marvin the Martian's ray gun as a kid burned down a friend's house.

Flash evacuates all the people on the scene before trying to confront Xotar again.

Xotar reveals herself to be telekinetic and holds The Flash off the ground.

Barry vibrates his cells fast enough to generate a lightning shock that takes out Xotar.

After sharing the news of Xotar's defeat, Barry says they can see about talking Joe into making a pot of his famous jambalaya. Everyone else thinks he is making a sick joke.

Barry goes to Joe and Cicile's house looking for Joe.

Iris and Cecile tell Barry that Joe died six months earlier and that Barry gave the eulogy at his funeral.

A memorial plaque gives Joe's day of death as May 23, 2021. (This was six months to the day of this episode airing.)

A news report claims that Flash attacked the city after Xotar's arrest. There were no deaths, but many were injured and the damages were estimated to be worth millions of dollars.

Despero summons the Flame of Py'tar, the undying fire of his home world, to destroy Barry.

Despero uses his powers to put Cecile to sleep when she tries to defend Barry.
Allegra teleports into the house with Chester, who uses a device to repel Despero's attack.

According to Alex Danvers, the Flame of Py'tar was an energy source that was supposedly the sentient heart of the planet Kalanor, but that nobody had encountered an actual Kalanorian until Team Flash met Despero.

Chester says that he can track down Barry, even without STAR Labs' satellites.
Barry is revealed to be hiding at the old STAR Labs hangar where he set up a round table in L501.

Frost ice-bridges a lot of material out of STAR Labs off-camera and sets up a basic medical lab in Caitlin's apartment.

Joe West is implied to have died in the line of duty.

Surprisingly sedate given everything that happens in it, but not bad by any means.
Posted by Starman at 7:57 PM