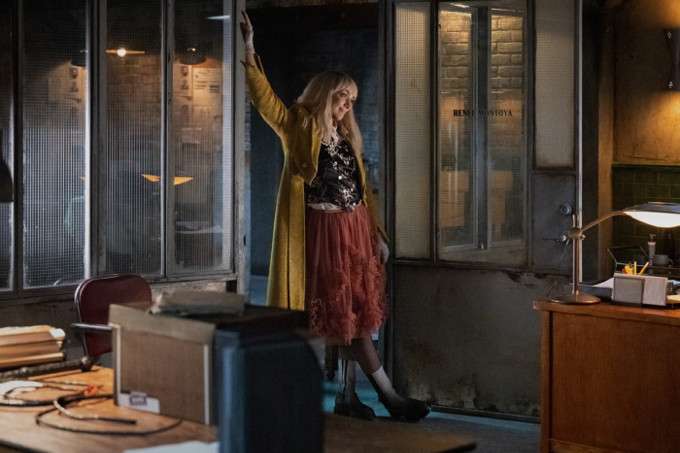 Plot
Ryan asks Sophie to accompany her to a dinner at Jada's to determine just what her mother knows about Wayne Enterprises and their finances. The evening takes a turn for the worse, however, when an uninvited guest shows up, revealing a new side to Marquis and his mother.

The comics of Grant Morrison (characters of Jada Jet, The Whip, The Flamingo and Professor Pyg)

Why doesn't Luke go to DEFCON 1 the minute he loses touch with Sophie?

The costume for Professor Pyg is a high quality piece of make-up and costuming.

Created by writer Grant Morrison and artist Andy Kubert, Professor Pyg first appeared in Batman #666 in July 2007. Born Lazlo Valentin, the man who became known as Professor Pyg was a brilliant scientist and surgeon employed by the secret United Nations organization Spyral, who was driven insane by a product he was testing. The formula made Lazlo paranoid and obsessed with perfection, performing surgery on himself to become the horrific pig-faced Professor Pyg. He continued to practice his depraved medicine to "make people better" fitting them with horrible new faces and drugging them into becoming his depraved servants.

The Arrowverse version of Professor Pyg is also named Lazlo Valentin, but was apparently a hitman for several years before going straight and becoming a gourmet chef. (His hitman past was mentioned in 213.) Unfortunately, he was fired by Jada Jet, who used her name to ruin his reputation and leave him unable to find work. This resulted in his wife leaving him, taking their children with her, pushing Lazlo to seek revenge on Jada Jet.
Alice lists several Batman villains while going through Montoya's files, some of whom have previously appeared in Batwoman and in other Arrowverse series. These include Magpie (last seen in 120) and Talia Al Ghul (last seen at Oliver Queen's funeral in A810).

One of the villains on Montoya's list is said to be a woman named Shelley Gaynor, who is known as The Whip. She is said to be an animal rights advocate whose whip was made of faux leather.
In the comics, Shelley Gaynor was a hero called The Whip, who was part of the Seven Soldiers of Victory. She was the granddaughter of a Golden Age hero, also called The Whip, who is primarily remembered for making his first appearance in Flash Comics #1 in January 1940 along with the Jay Garrick Flash and Hawkman.

The background given for the Arrowverse Poison Ivy draws off of the origin Pamela Isley recived during the Bronze Age of Comics and her appearance in World's Finest #241 in July 1978. In this origin, Pamela was seduced by a man named Marc LeGrande into helping him steal an Egyptian artifact containing ancient herbs. He tried to poison her with the herbs, which were so rare as to be untraceable, but she survived the attempt and developed an immunity to all toxins and diseases. It was not until the post-Crisis era that Ivy's background was changed so that she became the victim of experiments by Jason Woodrue (aka The Floronic Man) which left her with an immunity to toxins, a toxic kiss and plant-control powers.

The Arrowverse version of Poison Ivy was said to have a rival in the PhD program named Marc LeGrande, who abducted her and used her as his guinea pig. He injected her with oleander, nightshade, water hemlock and other poisonous plants that changed her physiology and her mind, changing her from a compassionate and loving woman to a reckless maniac overnight.

Alice eventually determines that the murderer with the whip was a villain called The Flamingo, whom she describes as a "flamboyant, pink, Harley-straddling psycho."

In the comics, The Flamingo was a villain created by Grant Morrison and Andy Kubert for Batman #666. Once an ordinary man named Eduardo Flamingo, he was brainwashed by the Gotham mob into becoming a contract killer and serial killer for hire, who ate the faces of his victims. He did wield a whip as a weapon and had a dandyish dress sense, with a pink leather jacket and matching Harley-Davidson motorcycle

Catwoman reportedly stole some of Batman's nanotechnlogy and wove it into her whip, making it indestructible.

Zoey's dissertation is on modern family dynamics particularly as it relates to Bowen's family theory paradigm as it relates to triangulation and the roles of rescuer, victim and persecutor.

Mary determines the murder victim had motorcycle grease under his fingernails and she found a similar, but not exactly the same viscous synthetic on the bullwhip.

The show introduces a new wrinkle that Poison Ivy can take control of other people and use them as host bodies. This is apparently what has happened to Mary Hamilton.

Alice: So you're Ryan's date? So saw that coming.
Sophie: It's not a date. It's recon.
Alice: But you're wearing a push-up bra, so it's a date.
Sophie: You know this is your fault, right?
Alice: Ugh. Don't blame me for this repulsive love affair.
Sophie: If you'd never told Ryan that her biological mother was still alive, we wouldn't be in this mess!
Alice: (mock sincerity) Soph, the guilt I think I'm supposed to be feeling is seriously killing my hallucination-free vibes.

As the movie opens, Alice and Sophie are seen watching a horror movie together, confirming that Alice is now Sophie's roommate.

Both women hear a noise, which turns out to be Batwoman on the balcony.

Ryan came to retrieve Alice because of a murder victim Montoya thinks was killed with one of the Batman trophies, i.e. Catwoman's whip.

According to Luke, Catwoman and Batman had a romantic relationship.

Alice determines that the whip the murder victim was bound with cut with a pocket knife, making it impossible for it to be Catwoman's whip.

Wayne Enterprises stock is down 53% in the three days since 304.

The entire Crisis Management team for Wayne Enterprises quit because of the stress from the accusations Ryan is facing.

Ryan was delivered a couriered letter inviting her to dinner at Jada Jet's house.

Mary points out that the only evidence they have tying Jeturian Technologies to the Black Glove Society came from Alice, who is hallucinating so badly they had to pull her out of an asylum.

Alice says she has not hallucinated since leaving Arkham Asylum.

Sophie poses as Ryan's girlfriend at the dinner, to help her bug Jada Jet's home office.

Jada Jet's chef is revealed to be Professor Pyg.

Ryan and Sophie lie and say they met through friends on a Tuesday. They remember because it was taco night.

Jada tells Ryan that she knows something is going on between Ryan and Marquis.

Marquis shows up with a date - a woman named Zoey.

Sophie plants a bug and searches Jada's desk while pretending to go to the bathroom.

Sophie finds a picture on Jada's desk of herself with a man and a young Marquis, but the photo is folded so the man is no longer there.

The feed to the Batcave suddenly cuts out while Luke and Sophie are talking.

Jada tells Marquis that Jada knows something is up after she leaves the room.

Jada finds Sophie in her office. She lies badly and says she got lost.

Montoya asks Alice to figure out who besides Catwoman might tie a guy up with a bullwhip.

Alice determines that Montoya is obsessed with Poison Ivy for some reason, based on the fact that her files on Ivy are very detailed but the other files are rather thin.

Ryan is once again confirmed to be a Vegan.

Zoey is said to be a graduate student who is writing her dissertation on modern family dynamics.

Jada confronts Ryan about Sophie snooping around in her office.

Zoey goes to the bathroom and suddenly finds herself losing all sensation in her hands.

Professor Pyg reveals himself and explains that he drugged the wine. He discusses how he was fired by Jada years earlier and how his wife left him and took the kids when he couldn't find work.

Ryan goes to get Zoey but finds her dead in the bathroom.

After finding that their phones are dead and the front door is locked from the outside, Jada escorts everyone to a panic room on the top floor.

Jada does not own any guns.

Marquis starts spasming once they are in the panic room.

Montoya tells Alice that she knew Pamela Isley before she became Poison Ivy and that the two dated while they were students at Gotham University, where Pamela studied botany and she studied criminal law.
Alice confirms that Poison Ivy was not in Arkham anymore, despite having a cell there with her name on it.

Montoya doesn't know what Batman did with Poison Ivy, but she guesses that he buried her somewhere away from water and sunlight.

Montoya helped Batman to lure Ivy into a trap.

Alice has another hallucination of a letter from her father.

Sophie says that without an adrenaline shot, Marquis is going to die because he drank far more of the wine than anyone else and is having a more extreme reaction to the paralytic.

Jada says there are several EpiPens among the camping gear in her basement and that her husband carried them all the time because of his allergies.

They are able to see Professof Pyg building a bomb through the security monitors in the panic room.
Sophie tells Jada that she is Jordan Moore's sister and accuses her directly of being connected to Black Glove.

Professor Pyg gets to Ryan as she passes out while making a break for the basement.

Alice tells Mary her delusions are back.

Mary has developed a constant itch ever since being exposed to a certain vine. Alice identifies the vine as Poison Ivy.

Jada shows herself to Professor Pyg to save Ryan. This allows Ryan, who was playing possom, to inject herself with adrenaline and fight Professor Pyg.

Sophie saves Marquis' life, only for Marquis to go berserk and kills Professor Pyg.
Alice eventually identifies the killer as the Flamingo and the victim as a member of a rival gang.

Montoya says that Ivy's vines don't die unless she's infected someone else.

Sophie once again tells Ryan that she's sure Jada is hiding something.

Jada found the bug Sophie left behind. She also found out who Sophie is and that she was a former member of Crow's Security.

Jada tells Ryan that Marquis is sick in the head and had been since he was a child.

Marquis was one of the students on the bus full of children Joker had taken hostage in the flashback of the Batwoman pilot. The Joker shocked Marquis' head with his buzzer and the voltage made Marquis different and dark.

As a child, Marquis poisoned his dad with peanuts and laughed while he died.

Jada says she has spent millions trying to fix Marquis behind his back, seeing multiple specialists and psychologists. Her latest effort involved hiring the Black Glove Society to help her build a working treatment to safely freeze Marquis until she could find a cure and then revive him. She says she had no idea they were going to test the treatment on innocent people like Jordan Moore.

Jada claims she was pushing Ryan away because she was trying to protect her from Marquis.


The Bottom Line
A waste of a good villain, though the horror elements are competently executed. Unfortunately, everything involving Jada and the set-up of Marquis as a new Joker is nowhere near as interesting as everything involving Alice investigating Poison Ivy's connection to Montoya and the idea that Ivy is now taking over host bodies. While it seems oddly par for the course that Alice has become the best detective in the show, it is weird that she's the one doing most of the heroic work in this episode.
Posted by Starman at 4:18 PM