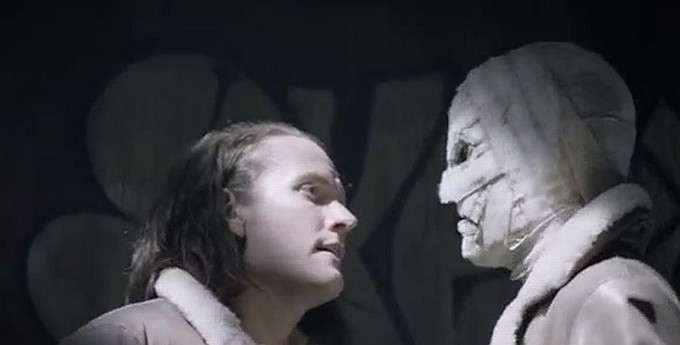 Plot
Jacob Kane forms an uneasy alliance with Batwoman to catch an Arkham Asylum escapee on a rampage. Meanwhile, things come to a head between Alice, Mouse and Hush, as Alice attempts to put her house in order while plotting how to best bring Batwoman down.
Influences
Batwoman: Elegy by Greg Rucka & J.H. Williams and the Heart of Hush storyline.
Goofs
It beggars belief that a big guy like Tim "The Titan" Teslow can walk around Gotham City in an orange jumpsuit wielding twin machetes and go unnoticed, particularly since he's making no attempt to stay hidden.
Perhaps the most ludicrous conceit of the episode is that he manages to get into Gotham University's stadium undetected, despite it being surrounded by The Crows, and that he shuts down the power before taking down several men in body armor.

Why don't The Crows shoot at Teslow while he is charging Batwoman on the field? Why do they wait until after Batwoman spends a minute talking him down, apart from it making it clear just how evil The Crows are? Most annoyingly, why don't they try shooting her uncovered face rather than her well-armored chest?
Performances
Rachel Skarsten absolutely nails Alice's monologue as Mouse dies.
Artistry
The opening action sequence on the train is one of the best in the show's history.
Bat Trivia
It is confirmed in this episode that Batman was given a piece of Kryptonite by Superman in case it was ever necessary to end his life. Superman also did this in the comics.

The episode ends with Alice having given Hush the face of Bruce Wayne. The same thing happened in the comics, in the storyline Heart of Hush.
Technobabble
The Crows release an app to the general public that can be used to summon them in the event of an emergency relating to Alice or the other Arkham escapees.
Kryptonite is described as a mineral with a natural green luminescence and strong covalent bonds.
Kryptonite is nonreactive to acetic, hydrochloric and sulfuric acid.
Mary says that Tim Teslow's Dorsal Posterior Insular (the part of the brain that regulates pain) shriveled down to next to nothing after years of traumatic head injuries. This explains why he felt nothing when he fought Kate.
A trauma-bond exercise is a psychological event where you destroy something that connects you to your pain as a way of moving on. In this case, Alice suggests destroying her copy of Alice in Wonderland with Mouse so they can move on to a new life.
Luke was finally able to destroy the Kryptonite using a hydraulic press generating 40,000 pounds of compressive force.
Dialogue Triumphs
Mary: You told me that The Crows wanted to make over their image. Why not start by allying yourself with someone the city actually roots for?
Jacob: You did this?
Mary: I knew I'm one of the only people who could get through to you! (sighs) I believe in her Dad!
Jacob: Mary - I said anyone affiliated with her will be brought to justice.
Mary: Then arrest me! Arrest me for believing in someone who saves lives and who stops criminals and who inspires hope without charging a penny for it! I'm your daughter and if I don't believe in what you're doing , how can you expect a city of strangers to?!
(Alice and Mouse are burning their copy of Alice In Wonderland.)
Mouse: What happened to us should never happen to anyone. But there's no one in the world I would rather have gone through it with than you.
Alice: (sniffling) Nor I without you. And I mean this - with all of my heart. (pauses) I still want to join you in the beautiful garden, and smell the seasons in bright flower beds, and make a wish in cool fountains. I want to meet a man with many hats and smile back at the Cheshire Cat. And run... with you forever.... through our Wonderland.
(Mouse reaches up to his nose. Blood has begun to run from it.)
Mouse: Alice?
(Alice shakes her head, holding back the sobs and trying to avoid Mouse's gaze.)
Mouse: What did you do?!
Alice: (suddenly bitter, intense) You made me choose.
Mouse: You poisoned me?!  Why did you do that?!
Alice: (softly, stammering) Be-Because I couldn't let you leave me! Not you too!
Mouse: This...this wasn't even real?
(Mouse moans and pitches forward. Alice takes his head into her lap and begins stroking his hair. She begins crying freely.)
Alice: If only pain could turn to ash, with the strike of a match. (intensely, hissing the words) But my pain is a part of me, the way my family is a part of me.And you could never understand why I need to enact my revenge. Because you have never experienced true betrayal. (sadly) At least not until now.
(Alice bursts out crying again.)
Alice: Goodbye, my sweet Mouse. My brother. My everything.  I'll see you again in Wonderland.
Continuity

Kate saves Jacob from a psychotic man on the subway, in her civilian identity. The man beheads another man before making his escape.
Vesper Fairchild identifies the psychotic man as former college football star Tim "The Titan" Teslow.
Tim Teslow was a Tight-End for the Gotham Goliaths before he was committed. He was the best in the team's history, scoring at least one touchdown in every game he played, making 100 catches and rushing 1000 yards each season.
Mouse wants to leave Gotham and start a new life with Alice somewhere else.
Alice is insistent she needs to kill Kate before she can leave Gotham, which means finding the Kryptonite mentioned in Lucius Fox's journal.
Hush insists that Alice keep up her end of the bargain and get him a new face, which she promised in exchange for Lucius Fox's journal and help translating it.
Luke says that the shard of Kryptonite Superman left in Bruce Wayne's possession is the only Kryptonite left on Earth. We know this isn't true, however, as Kate acquired a piece of it from the Bruce Wayne of Earth-99 during 109.
.
Luke sets about trying to figure out how to destroy the Kryptonite.
Kate does not follow sports at all.

Mary knows a shocking amount about football and the career of Tim Teslow, largely because Tim Teslow's brother Apollo was dating her friend Selu Corova.
Apollo Teslow is the Goliaths' Running Back.
Tim Teslow used to be the kind of man who would walk the neighborhood kids to school to make sure they felt save.
Tim Teslow was committed after he killed a referee on the field after a referee made a call against him. After that, it came out that he was abusing steroids.
Mary warns Kate against getting involved as Batwoman, but Kate insists she knows how to work around her father.

Mary recalls that Kate, as a teenager, stole a Crow's SUV and was arrested for joy-riding in it.

Mary also recalls that Kate threw a party in Jacob's penthouse without asking and Jacob let the police land a helicopter on the roof to arrest Kate.
Kate wants to come clean to her father about being Batwoman.
Alice approaches Professor Darby, the head of the geology department at Gotham University, regarding Kryptonite, as his name was mentioned in Lucius Fox's journal.

Alice kills Professor Darby after learning that he sent the Kryptonite sample he was given to analyze back to Wayne Enterprises.
Apollo Teslow testified against his brother at his trial.
Apollo blames years of untreated head injuries coupled with steroid abuse for turning his brother into a psychotic maniac.
Tim Teslow shows up at the stadium where Apollo is training and gets past Batwoman to stab him in the back, paralyzing him permanently.
Kate suffers a couple of cracked ribs and a dislocated shoulder during her fight with Tim Teslow.
Luke determines that the man Tim Teslow killed on the subway was an administrator at Gotham University, who was fired from the college's neuro clinic for falsifying the brains scans of student athletes. This caused the players to keep playing even when it wasn't safe and likely aggravated Tim Teslow's condition.
Wayne Tower is 45 stories high.
Mouse asks why Alice is making Hush a face whens he promised him they would kill him, before he threatens to leave Gotham without Alice.
Mouse is still bitter that Alice didn't visit him for the 5 years he was trapped in Arkham Asylum.
Alice finally agrees to leave Gotham City with Mouse, but says they have to throw a party first.
Coach Kurt Donahue of GU's football team took early retirement just before the scandal with the college manipulating the players' brain scan records broke. While nothing could be proven legally, there was no way he could be ignorant of what was being done to keep his players on the field.
Mary lights the Bat-Signal and is taken into custody by The Crows. This leads her to approach Jacob with an offer to work with Batwoman to bring in Tim Teslow.

Jacob agrees to the truce.

Coach Donahue gives a press conference, asking to meet Tim Teslow on the field at Gotham University's stadium so he can apologize to him in person for putting the game before his health.
Alice poisons Mouse to prevent him from leaving her.
Sophie and Julia are not informed about the partnership between The Crows and Batwoman. This leads them to conclude that Jacob is setting a trap for Batwoman, since Jacob knew they had contact with her before.
The Crows gun down Tim Teslow after Batwoman has talked him down.
Batwoman escapes after The Crows try to shoot her.
Sophie criticizes Jacob for putting her in charge of managing the Crows App, suggesting he did so to keep her out of the way while he went after Batwoman.
Julia confesses to Sophie that she was involved with a woman named Safiyah who put a price on her head. She shows Sophie pictures of them together, which were left at her hotel room - a sign that the are being watched and that Sophie is now a target as well.
Kate admits that Mary was right about her not being able to come out as Batwoman to Jacob.

Luke successfully destroys the Kryptonite Bruce had.
Kate reveals the existence of the Kryptonite she got during Crisis on Infinite Earths to Luke and Mary.
Kate declares there should be no more secrets between the three of them.
The Crows recover some of the expended bullets that failed to penetrate the Bat-Suit. This leads Jacob to declare they need to find something stronger than a Desert Eagle.
Alice is revealed to have given Hush the face of Bruce Wayne. He asks him to walk into Wayne Enterprises and get the Kryptonite from Kate.

The Killing Jokes
The Crows and Batwoman look horribly incompetent in this episode, given they have trouble taking down a single psychotic ex-athlete with brain damage.

The Bottom Line
Had this been a regular episode, it might have been okay. As a season finale, it's a bitter disappointment, due to a villain who has to be made into something far bigger than he should be to justify the conflict with The Crows and Batwoman. As per usual, the best bits of the episode involve Alice and even with her killing Mouse its increasingly difficult not to see her as the least of all evils out of all the characters in this show. Still, the cliffhanger is an awesome one and a great lead into Season 2.
Posted by Starman at 4:39 PM