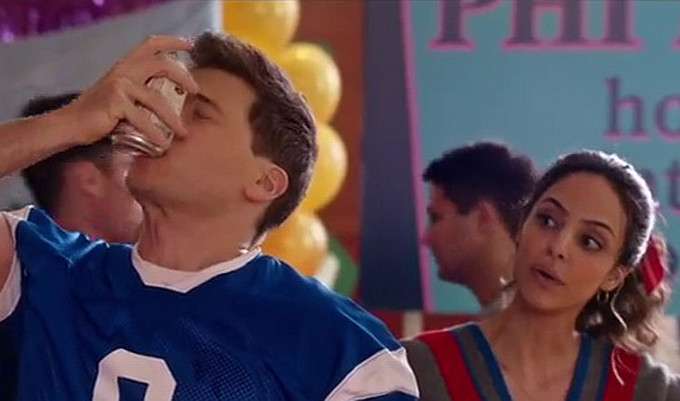 Plot
To use the Loom of Fate, the Legends determine that at least two of them have to become gods to help Charlie reweave destiny. The Chalice of Dionysus holds the power they need, but before they can gain it they have to win the favor of Dionysus by forming a sorority and winning the Greek Games at Hudson University.
Influences
The whole Fraternity Comedy genre, particularly National Lampoon's Animal House and National Lampoon Van Wilder. Also Marvel Comics' Thor (the Chalice of Dionysus can only be picked up the worthy, like Thor's hammer)
Goofs
Nate's past as an aspiring frat bro seems at odds with what we know of his academic life, where he was sheltered well until adult-hood because of his hemophilia. (Possibly he never had hemophilia Post-Crisis?)
Performances
Drew Ray Tanner (best known to CW fans as Fangs on Riverdale) has a fun turn here as Dionysus, playing the Greek god of revelry like Ryan Reynolds in Van Wilder. Which is not a bad choice.
Artistry
The production team did a great job capturing the feeling of a 1980's college sex comedy.
Trivia Of Tomorrow
Most of the action of this episode takes place at Hudson University. This was the college which Dick "Nightwing" Grayson attended in the Batman and Teen Titans comics.
The sorority that the Legends women join is Delta Chi Sigma or DCS.
Technobabble/Arcana
The Philosopher's Stone is a magical artifact used by Merlin to convey immortality, according to ancient legend. However, according to Charlie, the Philosopher's Stone is not real and neither is Santa Claus.
The Chalice of Dionysus was a gift from Zeus to Dionysus. Whoever drinks of the Chalice gains the immortality of a Greek god for a day. However, only a member of a fraternity or a sorority can pick up the Chalice and they have to be deemed worthy by Dionysus himself. (The first requirement can be waved, however, if Dionysus wills it.)
The Olympian gods fed off the devotion of their followers. According to Charlie, they lost power as less people began worshiping them and their artifacts lost power as they slowly died off.
The gargoyles in John Constantine's house bite intruders.
Dionysus brews his own beer which causes any mortal who drinks it to stop caring about anything but having fun.
Dialogue Triumphs
(Lita and Mick are touring the Hudson University campus with a snooty family who keep not-so-subtly trying to show off.)
Snooty Father: I'm an alumnus. Yo probably noticed the scarf.
Mick: Yeah. (muttered) I'd like to wring your neck with it.
Snooty Mother: What was that?
Mick: (growls) I said-
(Lita coughs and Mick takes the hint.)
Mick: I said it's a great building!  Good brick structure. Fire resistant.
Snooty Father: Oh, you really know your architecture. Where did you study?
Mick: (cheerfully) Iron Heights.
Snooty Mother: Haven''t heard of it.
Lita: It's a super prestigious art school.
(Charlie and Dionysus catch up.)
Charlie: You're... in college.
Dion: (shrugs) I know. I'm a lifer. Found a place where the party doesn't stop and I haven't left since. But honestly? They worship me here. And they don't even know that I'm THE party god!
(Charlie and Astra almost start fighting again. Sara takes Astra's hand as Ava stands to stop them, as Zari keeps eating.)
Ava: Oh, okay. Whoa! Whoa! Stop! Nobody is killing anybody.
Sara: (still holding Astra's hand, clearly having a vision of the future) Wooh!  Astra was definitely going to go for it. Zari? Hide that fork.
(Zari stops in mid-bite, fork held to her lips.)
Ava: Charlie?  Just chill. Please sit down. Just take a breath, yeah?
(Without saying a word, Zari tucks the fork into her blouse.)
Continuity
The team researches different means of making a person godlike or powerful enough to survive using the Loom of Fate.

John discovers a reference to a magic cup called the Chalice of Dionysus that is said to make mortals who drink of it immortal for a day.
Nate recognizes the Chalice of Dionysus as "The Chug Cup" - an artifact passed around the fraternities and sororities of Hudson University which was said do make whoever drank from it invincible for a day.
Nate went to Brixton - the rival college of Hudson University.
The Chalice is currently in the possession of the Sigma Psi Phi fraternity.
The Chug Cup is awarded to whichever fraternity or sorority wins am annual contest called the Chug Challenge, which is held in conjunction with Rush Week and the student activities fair.
Lita calls Ava "Aunt Ava," apparently having grown close to her during her and Mick's trips to visit her as a child.
Lita's guidance counselor told her to apply to Hudson University.
Mick says he can pay for Lita to go to college wherever she wants.
Mick and Lita decide to take a tour of the Hudson University campus.
The moose is the animal mascot of Hudson University.
Astra wants to just take the Chalice by force, while the rest of the team is trying to figure out a way to find it and finesse it.
The economics building at Hudson University is in Quincy Hall.
Nate claims that he was known as Shotgun Nate when he was in college, because of his ability to chug a beer in a single gulping (aka Shotgunning)
The president of Sigma Psi Phi is a student named Dion, who is carried into the student fair on a litter.
Zari says she entered the 2044 VMAs the same way.
Nate recognizes Dion and says he was the President of the Sigmas when he was in college.
Dion is revealed to be Dionysus, who has found a way to retain some of his former power by posing as a "lifer" college student and feeding on the admiration of his fellow Greeks.

Charlie was friends with Dionysus in the Ancient Greek days and describes him as "a riot."
Dion says the first of the Chug Challenges will be formally announced that night at a party being thrown by Sigma Psi Phi.
Dion remembers Charlie fondly, saying that the other Greek gods were always reigning in the party before people got free will. He's agreeable to doing Charlie a favor, up until Astra tries stealing the Chalice of Dionysus.
Dion says the only way Charlie and the Legends can sample the cup is to join a sorority or fraternity and win the Chug Challenge.
Charlie and Astra attempt to join Theta Lambda Ro - a sorority that is accepting new pledges and having a luncheon that afternoon. They wind up getting kicked out, along with the three other women at their table.
Lita was in a band for a while, but quit because nobody wanted to play The Replacements.
Lita also works a part-time job.
Neuman Hall is a prominent building on the Hudson University campus. It is named for Henry Neuman, who is the grandfather of the snooty kid on the tour with Mick and Lita.
Mick asks Nate to accompany Lita on the tour and pretend to be her dad while he tends to some business. This business is later revealed to be going back in time and donating money to the school. This changes the timeline so that Neuman Hall becomes Rory Hall.
Zari suggests they start their own sorority, using the Waverider to go back in time and take care of everything they'd need to do to have a sorority recruitment party that night.

Nate and Lita go into Sigma House so they can scout for where the Chalice is kept.
The sorority the Legends women sign up with is Delta Chi Sigma.
The Legends acquire a run-down house on Greek Row and set up a time corridor to John Constantine's house, which he agrees to let them use for the party.
To be recognized, a sorority chapter needs eight members. This leads the Legends to recruit the three women cut from the Theta table. These women include Inez Martin, a cheerleader who was voted off the pep squad for being too enthusiastic; Lisa Lindhome, an aspiring social media influencer who was shunned after becoming the star of a viral video "Girl Snarts At Party" and Silvia Hines, an artist who created her own major program in Performance Art.

Nate now has enough fine control over his powers he can turn individual parts of his body into steel. he does this to wow the Sigma Bros by withstanding their paddling by turning his butt to steel and breaking their paddle.
Nate confesses to Dionysus why the Legends were looking for the Chalice of Dionysus, after chugging from a keg of Dionysus' special IPA.
Behrad had a special nacho recipe.
Dionysus disqualifies the Deltas from the Chug Challenge on the grounds that he doesn't want the Loom of Fate being used again, even by Charlie.
Lita tells Mick that she doesn't really care about going to college, much as she appreciates the effort he went through changing time and donating money to try and make her into a legacy recruit. She says she only survived high school thinking about finding a life outside of it.
Nate tells Charlie and Astra that Dion only has power so long as he has followers. This leads them to the idea of throwing a better party than the Sigmas to take away his power so they can take the Chalice.
Zari hacks Dion's DJ set-up and switches his party mix to a selection of yodeling songs.

Charlie disguises herself as Nate and gets access to Dion's keg storage, allowing Mick to set the whole micro-brewery on fire.
With no beer and no music, the party migrates to Delta House.  Despite this, Mick still can't pick up the Chalice. This is because Dion's followers are his fraternity brothers - not just the people he parties with.
Sara challenges Dion to a game of beer pong for the Chalice before all his bros and uses her precognitive powers to see what moves to make.
Inez, Lisa and Silvia decide to keep Delta House going at Hudson University after the Legends leave.
Dionysus is true to his word and lets everyone drink wine from the Chalice. This makes all of the Legends immortal for a day, save Zari, who refuses to drink because of her religious beliefs. He does request, however, they don't change anything that might ruin his party.
Lachesis approaches Astra and tells her she's calling in the debt she's owed for agreeing to help Astra kill John Constantine.
Location
Hudson University - 2020
The Crisis Factor
Astra, who spent a relative eternity in Hell learning how to play the game and manipulate people, suddenly lacks that patience to wait five minutes for the Legends to try and talk Dion into letting them borrow the Chalice and forces them to play his games by trying to steal it.

Amusing enough, though the Astra/Charlie conflict seems largely forced. Still, it serves as a fun tribute to a genre of comedy that is rarely executed in the modern day except as a form of self-parody. Which makes it all the more fitting as a target for the Legends to lampoon. The subplot with Mick and Lita is also pretty sweet.
Posted by Starman at 10:13 AM