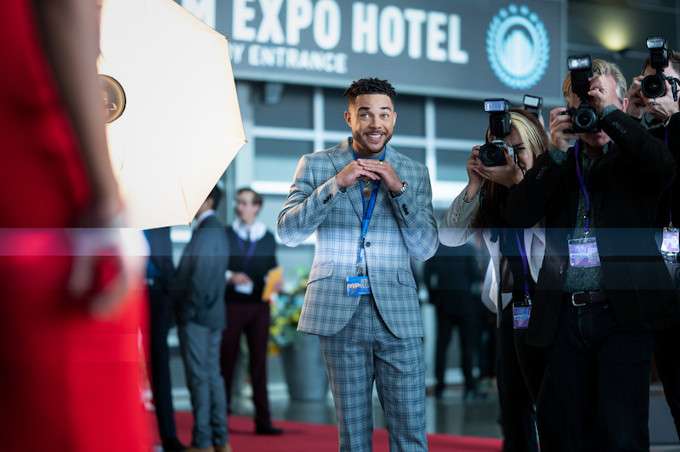 Plot
When Ryan is named to Gotham City's "30 Under 30" list, Luke worries that Marquis Jet's efforts to form an alliance with Ryan will bring Jada Jet's wrath down on Wayne Enterprises. Meanwhile, Alice's hallucinations grow stronger, Mary feels unlike herself and Sophie's sister Jordan goes missing after an incident which suggests more of Mr. Freeze's technology is still on the street.

Mention is made of a made-up Batman villain called Icarus who had "Zero-G" sneakers. This gimmick sounds like the Air-Walker shoes employed by The Trickster in the comics.

First appearing in Batman #667 in August 2007, the Black Glove Society were created by Grant Morrison and Tony S. Daniel. Apparently a secret society of wealthy elites who just throw wild parties, the true organization was made up of sinister people who staged a yearly contest to play out some epic battle of good and evil. In this case, they tried to manipulate Batman.

Interestingly, one of the members of the Black Glove Society was a woman named Jezebel Jet who was briefly a love interest of Bruce Wayne. It seems likely that Jada Jet is meant to be an Arrowverse adaptation of the character.

Mary says that the formula used to freeze Jordan is based on the catalytic mechanism of Victor Fries' research, but what used to happen inside a chamber is now happening inside Jordan's cells. The effect on organic tissue is like the process that petrifies wood.

The GCPD are said to have thermal cameras all around Gotham City. Luke uses this knowledge to find an unusually hot room for thawing out one of the other Black Glove victims.

Mary notes that plants evolved to survive winter by synthesizing a type of antifreeze in their vascular tissue to thaw from the inside outward.

The Lucius Fox AI was not designed to run independent of the Batwing suit failsafe and has no purpose beyond acting in Like's best interest In this case, it determined Luke was not ready to wear the suit yet, which was why it shut down..

(Alice is surrounded by Black Glove Society members, including the man in the suit.)
Alice: Just taking a shot here... are you make-believe?

Luke: So, what? So, even though nobody thinks that you'll win, you're just gonna... stay and fight?
Ryan: Have you met me?

In the opening scene, a man is shown conducting experiments on various figured frozen with Mr. Freeze's cryo-formula and thawed out. One of these subjects cracks when asked to leave the room. The man calls this experiment a failure and notes they have 24 hours until the client's deadline.

Mary is shown on a park bench with vines crawling over her.

Charlie Clarke is the head of Public Relations for Wayne Enterprises and has been there since Lucius Fox's day.

Sophie's sister Jordan is also on the 30 Under 30 list because of her work with the local community center.

Mary tries to tell Ryan and Luke about waking up on the bench, but they both blow her off.

Alice is still imagining spiders crawling inside her because of the nanite trackers.

Alice hallucinates more mail from her father and killing the orderly who brought the messages to her.

Charlie says that he had to bribe Bruce Wayne to get him to memorize his talking points.

Marquis makes a big deal about getting his picture with Ryan at the event.

Sophie tells Jordan that she had a dream about Ryan bringing her soul while she was in bed.

Sophie is 31 years old. She is also apparently still unemployed.

Jordan says that Sophie should ask Ryan out.

Jordan is abducted by the man from the opening scene.

Alice is dropped off at Mary's clinic.

Alice admits that she got Montoya to let her out of Arkham because she said she had a lead on the "Zero-G" sneakers of the Batman villain Icarus. Alice completely made this villain up.

Sophie asks Ryan and Marquis to help her find Jordan, who has gone missing.

Luke is trying to reset the AI in his Batwing suit, but it hasn't worked since he shut down the fail safe.

Ryan tells Sophie about how the last person they tried to reheat and how they aged at 4 times the normal rate.

Alice recognized Jordan's kidnappers as The Black Glove Society - a group of rich elites that supposedly rule Gotham City from the shadows who are also looking into a way to live forever.

Sophie says that Jordan and her activist friends were working to expose the Black Glove Society and she was going to use her speech at the 30 Under 30 event to do that.

Mary says she can save Jordan if she can get a clean sample of Fries' formula.

Marquis becomes angry with Ryan after she questions how he knew what room she'd be in.

Vesper Fairchild reports that the CEO of Wayne Enterprises has been diverting millions of dollars into a secret personal account.

Charlie reports that Wayne Enterprises stock has gone down 47$ in the past hour and the CFO is conducting a full audit into the company's finances.

Ryan offers to resign, but Charlie says this is the sort of thing that gets people arrested, not fired.

Luke determines that Jada didn't fake the numbers that were given to Vesper Fairchild - she somehow uncovered the secret budget used to pay for Batman's technology.

Alice hallucinates the orderly talking to her again while searching Jordan's apartment with Sophie.

Alice finds Jordan's hidden notes on the Black Glove Society, which connect them to Jeturian Industries.

Sophie and Alice get knocked out by the Black Glove Society thugs.

A sign once again show's that Mary's clinic is on Bennett Avenue.

Batwoman saves Sophie and Alice from being burned up along with Jordan's apartment.

Alice tells the rest of the team about her hallucinations and how they are getting worse.

Mary says the quality of care at Arkham is so crappy that they could well be giving her medication that causes a psychotic break rather than actually helping Alice.

Sophie agrees to let Alice move in with her and Mary agrees to takeover making sure Alice is getting the proper medication.
Charlie Clarke says he knows Ryan didn't steal from the company because she hasn't been CEO long enough to steal a stapler, let alone set up a fund to steal $30 million.

Clarke says that he was used to having to cover up similar scandals thanks to Bruce Wayne's public record of addiction, misbehaviors and mysterious disappearances.

Clarke comes up with a press release which says that the missing money was part of a top secret defense contract with ARGUS which Ryan mistakenly thought needed to be kept secret from the Board of Directors due to national security reasons.
Luke makes reference to an old friend at ARGUS who will help to sell the story that the misappropriated funds were part of a secret ARGUS contract. This is likely a reference to John Diggle, whom Luke befriended in 216.

Clarke suggests Ryan resign since the stock price is still falling because someone is manipulating the press against her. He fears they will lose control of Wayne Enterprises in a hostile takeover if Ryan stays.

Luke is fearful of losing the company after all his dad did to build it up.

Ryan reactivates the fail-safe and this reawakens the Lucius Fox AI.

The AI says that helping run Wayne Enterprises is beyond the scope of his programming.

Ryan reaches out to Marquis, but he shuts down any attempt to work with her against Jada.

Jada meets with the Black Glove society and it is confirmed that she had commissioned them to come up with a way to safely freeze and unfreeze a person using Victor Fries' science.

Jada says that Marquis is about to take a leave of absence.

Alice and Sophie get easily knocked out by the Black Glove Society thugs. As Sophie notes, this only happened because Alice thought they were a hallucination at first.

Oddly uninteresting. Too much of the episode shifts focus away from the established characters and their subplots to focus upon the high-finance, public drama of Ryan's ascension which seems rushed given that we just found out Ryan became CEO last week. Unfortunately, this isn't nearly as interesting as Luke's issues with his dad, Alice's hallucinations or even Sophie's relationship with her sister. It doesn't help matters that the show is utilizing the Black Glove Society which, while coming first, seems like a half-hearted rip-off of the similar and better-known Court of Owls.
Posted by Starman at 4:38 AM