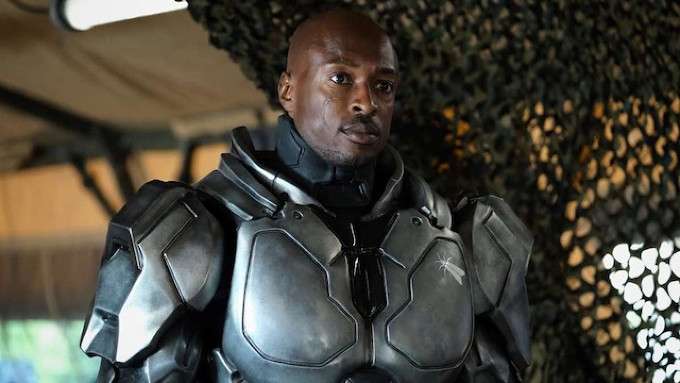 As Morgan Edge builds his power and bides his time while undergoing a horrific transformation, Lois becomes worried about how much time Jordan is spending with Sarah. Meanwhile, Jonathan grows closer to John Henry and Clark pays Lana a visit.

Reign of the Superman (Steel and Superman teaming against Eradicator, with Jordan as Superboy)

The special effects work and action sequences are of cinematic quality.

This episode originally aired three weeks after episode 113. Coincidentally, there's a three week gap between the events of both episodes.

Mention is made of one of the newly made Kryptonians being brought down at Jurgens and 4th Street in Metropolis. This is a nod to writer/artist Dan Jurgens, who was one of the creators responsible for the Death of Superman storyline.

Jonathan notes the difference between a rocket launcher and a missile launcher.

(John Henry is making adjustments to his hammer. Jonathan is watching him work.)
Jonathan: So how many volts is that?
John Henry: More than you can handle.
Jonathan: I don’t know. I’ve used it before with no problem.
John Henry: Well, it would be a problem now.
(Jonathan picks up a random part.)
Jonathan: So what other modifications are you making?
(John Henry takes the part from him, clearly annoyed.)
John Henry: What did I say about asking questions?
Jonathan: Not to ask them.
(John Henry nods as Jonathan walks over to his power armor. He points to the bug symbol.)
Jonathan: So what’s… what’s the deal with this?
(John Henry is waiting for his hammer to come back on-line as he faces a Kryptonian. The hammer finally finishes recharging and comes to his hand. He spins and throws it.... past the Kryptonian.)
Kryptonian: You missed.
(The camera tracks the path of the hammer, as if flies into Leslie Larr and sends her into the side of a building, saving Lois Lane and Janet.)
(We see a number of reaction shots of Lana and Kyle and the kids at the party, as well as Lois herself, stunned by the sudden attack.)
(The hammer goes flying back to John Henry's hand, knocking out the Kryptonian on the return flight.)
John Henry: (into radio) Larr’s down, and I got another one. (to himself) I’ll never miss.

This episode takes place three weeks after the events of 113.

The opening scene repeats the closing scene of the last episode, showing Morgan Edge close to the sun, absorbing solar energy as he hears the voices of the Kryptonians in the Eradicator, now seemingly all in his head.

Lana is said to be holding another open house when Lois asks Jordan if there will be an adult in the house while he's hanging out with Sarah Cushing.

Jonathan has been spending a lot of the last three weeks working with John Henry Irons and is eager to go back to working on his hammer.

Teague Family Hardware apparently went out of business and is the fourth small business in Smallville to close down in the last month.
Chrissy Beppo wrote an article attacking the Department of Defense still occupying Smallville and blamed them for the business closings, since people are scared to come into town to shop.

General Lane agrees to speak at a Smallville Town Hall meeting about what happened with Morgan Edge and explain why the Department of Defense has stayed in town for so long.

Clark goes to Lana's open house and discourages her from moving, saying that she's the heart of Smallville since his mother died.

Sarah tells Jordan she doesn't think they'll be moving since her parents can't find anyone to buy their house.

John Henry tells Jonathan he has nothing left to teach him and tells him to go enjoy being a teenage rather than spending time around him.

Chrissy tells Lois that she got an offer to sell the Gazette and that she might have to take it given that their subscriber base is shrinking as Smallville gets smaller.

The crowd at the town hall meeting is actively jeering General Lane and his soldiers when they show up.

Kyle goes to clean out his locker at the firehouse during the town hall meeting, knowing most of his former men will be there.

Jonathan and Jordan get invited to a party by Sarah's ex-boyfriend, who pointedly ignores her as he talks about it at the diner.

Sarah tells Jordan she can go without him, as she promised to play with Sophie and play "Princess Hair Salon."
Lois reveals that Morgan Edge is still on the loose.

Derek Powell's mother, Sharon, shows up at the meeting and shows a letter from the Department of Defense saying her son's death in 105 was still under investigation when it was clearly a part of what was going on with Morgan Edge.

Tamera thanks Kyle for everything he did to fight for her because of the people who were reluctant to accept a Black woman as a fire-fighter and says she put in a good word for him with the chief of Bristol County, where Kyle applied for a job.

Sharon Powell tears into Lois, saying she has no idea what it's like to lose a child. This causes Lois to freeze up, given her miscarriage, which was revealed in 108.

General Lane and his men are forced to leave the meeting after they get a message that Morgan Edge just attacked the facility where Leslie Larr was being held. Clark slips out at the same time.

Larr and Edge show up in Metropolis and hover above Centennial Park.

Lois goes with Clark and immediately starts trying to help evacuate people, while searching for a GBS colleague who has a video camera on the scene.

General Lane says he'll call his grandsons and make sure they get home safe.

Jordan and Jonathan ignore General Lane's calls, figuring he'll call back if it is important.

Kyle starts to have second thoughts about moving from Smallville based on his talk with Tamera. Shortly after he tells Lana this, he gets a phone call from the fire chief in Bristol County, who wants to hire Kyle to replace him as he retires.

Bristol County is a two hour drive away from Smallville.

Sarah storms off after calling her parents hypocrites for trying to leave Smallville to start a new life somewhere else after everything they ever said about fighting to save their hometown.

The Eradicator can now transfer Kryptonian minds into human bodies merely by looking at them. This causes four new Kryptonians to emerge as Superman and John Henry confront Leslie Larr and Morgan Edge.

Larr confirms that there is no Morgan Edge or Tal-Rho anymore and that he has become something else.

Jonathan runs into Tegan Wickhem at the party and she apologizes for trying to manipulate him before. When he dismisses her apology, she claims she honestly did want to hang out with him but everyone in Smallville thinks she looks down on them because she moved there from Central City two years ago.

Tegan says her father was sent to prison and her mom felt they needed a fresh start.

Sarah crashes the party to talk to Jordan and tells him about the move.

Sarah and Jordan's conversation is interrupted by a news report of the battle in Metropolis.

Lois finds Janet, the colleague from GBS, and takes command of her broadcast to tell the public what is going on.

Leslie Larr flies up behind Lois, in imitation of how the Lois of John Henry's earth died at the hands of Superman in 108. Jonathan recognizes this and tells Jordan it's just like the video he saw of the other Lois Lane's death.

John Henry is able to knock out Leslie Larr from a distance.

Superman and John Henry are able to bring down all the Kryptonians except the Eradicator, who flies off.

General Lane is informed that his grandsons are not at the Kent farm.

General Lane crashes the party and drags Jonathan and Jordan home. He agrees to give Sarah a ride back, however.

Jordan tells Sarah that he loves her before he is abducted.

Jonathan summons his father and tells him what happened.

Superman can't find any sign of Jordan or the Eradicator on Earth.

In a concrete bunker, the Eradicator transfers the mind of Zeta-Rho into Jordan's body.

It seems uncharacteristically lazy of the show's writers to have Jonathan and Jordan blow off their grandfather's phone calls to build the drama.

It's also a bit odd that General Lane doesn't have a full military escort and his protection is limited to a Kryptonite pistol in his glove compartment, given the circumstances.

A largely enjoyable episode, despite some contrivances in the script and the drama of Smallville's collapse being undercut by the Battle of Metropolis. The action sequences of Steel and Superman fighting to protect Metropolis are pitch perfect and the cliffhanger is a killer.
Posted by Starman at 11:39 AM