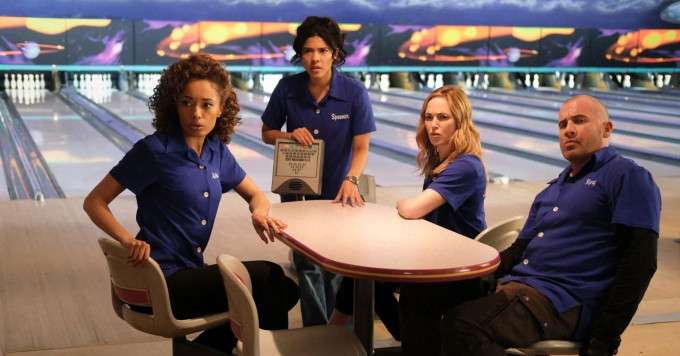 When the Legends track down another Alien pod, they find a device that transports them to a cosmic bowling alley. Before consulting Sara, Astra and Mick, Spooner makes a bet against the reigning champs for a ride back to the Waverider, but not everyone is happy about the plan when they realize what they are up against. Elsewhere, Nate plans a romantic date for him and Zari 1.0, but nothing goes as planned. Meanwhile, Behrad and Gary try to distract Ava, from what's going on as she searches for the perfect wedding dress.

Kingpin (comedy based around high-stakes bowling), the film version of 2001: A Space Odyssey (the scene of Sara putting the Earth back), the writings of Douglas Adams (particularly The Restaurant at the End of he Universe) and Jack Kirby's New Gods comics.

The whole cast is on fire in this episode.

Jes Maccallan does a fantastic job of pacing the episode. This has some of the best comedic timing the show has ever seen.

This episode was directed by Jes Macallan and marked her directorial debut.

The cubes used as invitations by The Pin Killers resemble the Motherboxes utilized by The New Gods.

Like the Coluans in Supergirl, The Pin Killers are capable of trapping planets in a compact form, though instead of placing them in bottles they change them into bowling balls.

John also has a spell that simulates the effects of marijuana, which starts with the chant "Cannabis edible, euphoria incredible, brain matter bendable..." but Behrad stops him from completing it.

Zari 1.0 can apparently only leave the totem safely for a day at a time or that is as long as they've gone testing to see how long she can leave it. In either case, she and Zari 2.0 have a schedule worked out.

Gideon's safety protocols do not allow her to attempt a time jump without plotting a safe exit vector.

John works a spell to take the Waverider to Earth which requires four elemental aspects of fire, air, earth and water. Behrad gives him some dirt from his garden, air from his totem, a glass of water and fire from his lighter.

Spooner's gun has a power dial that runs all the way up past 10 to a raised middle finger.

Sara: So we've been abducted by aliens.
All: AGAIN!

Ava: Thank you, everyone here, for making my day about a floating bowling alley.

Jeff: Jamie, I can't die without you knowing the truth. I got a secret vasectomy, and that's why you never get pregnant.
Jamie: Are you friggin' kidding me?
(Jamie turns around and starts to leave.)
Jeff: Wait, wait, baby.
Jamie: Not rock and roll, Jeff. Not rock and roll at all!
Jeff: If we have kids, we won't be able to afford our stuff, right? Wait, wait, where are you going?
Jamie: Into town! To find someone whose truck works!
Jeff: Wait!
(Jeff chases after Jamie, leaving Nate and Zari alone.)
Nate: Oof. That's rough.
Zari: Hey, am I a bad person if I found that very, very enjoyable?
Nate: No, no, no. They're terrible people.
Zari: Okay, good.

Mike the Strike: I'm not a god. I'm just an average Joe who loves to bowl and destroy countless worlds.

Buddy: They turned my bowling alley into a bullying alley.

(Spooner sees the scars on Mick's hands.)
Spooner: I suppose that's one good reason to keep your gloves on.
Mick: There's others.
Spooner: Hmm?
Mick: My past is not for everyone to see.

As the episode opens, Sara, Mick, Astra and Spooner are searching for an alien pod at a junkyard in Kansas City, Kansas.

Behrad is testing a new recipe for marijuana brownies when Constantine arrives on the Waverider.

Behrad notes that Constantine's magic seems to be super-charged.

Zari 2.0 is currently inside the totem while Nate and Zari 1.0 are on a camping trip.

Nate's campsite was double-booked and is taken over by an obnoxious couple named Jeff and Jamie when he and Zari get there.

Spooner says the pod they've just found is the last one in the timeline.

A puzzle box inside the alien pod transports Ava, Mick, Astra and Spooner to Galaxy Lanes, a bowling alley somewhere in deep space. They are also all outfitted with matching bowling shirts.

Spooner says she gets alien vibes from the whole bowling alley.

Ava is using the fabricator to try and design the perfect wedding dress. She asks Gary to help her.

The manager of the bowling alley is a man named Buddy, who looks human but is not.

Buddy created Galaxy Lanes because he loved bowling so much.

Buddy says that bowling was invented on Earth and that everyone else in the bowling alley are aliens in human form.

Spooner asks one group of players, the Pin Killers, for a ride back to Earth. Their leader, Mike the Strike, agrees, if the Legends can beat them in a game of cosmic bowling.

Nate notes they should be able to see the Northern Lights but he can't even see any stars in the sky where they are.

Nate made Zari's favorite meal - abgoosht - and brought her favorite brand of donut. Unfortunately, he accidently brought Spooner's bag instead of the one he packed and the only food in it are MRE rations.

Nate tries to use his Time Courier to return to the Waverider, but it isn't working for some reason.

Nate and Zari discover on their radio that the sun has apparently disappeared and it is night everywhere on Earth and that massive chasms have opened up in Mexico, Canada and Alaska.

Nate and Zari try to borrow Jeff's truck to head to town and figure out what is going on. Unfortunately, he and Jamie decide to come along.

The battery in Jeff's truck dies because he was running all his camping gear (including a pizza oven and hot tub) off of it.

On the Waverider, Gideon says she can't find the Earth.

Gary tries to distract Ava from the disaster by nit-picking her dress, while Constantine and Behrad gather everything John needs for a spell to take them to Earth.

Neither Sara nor Astra have bowled before. Sara turns out to be a natural, but Astra is not very good at all.

Mick refuses to take his gloves off, which hampers his ability to bowl as he can't put his fingers in the ball holes.

Spooner is a phenomenal bowler, thanks to one of her foster fathers who took her with him on his league nights.

John tries to work a ritual that will take the Waverider to Earth.

The Legends discover that the Pin Killers claim the home worlds of every team they beat as trophies.

The other members of the Pin Killers are Clare the Spare and Merv the Curve.

Jamie asks Zari if she and Nate are in a distance relationship and then asks if they can really handle the distance when they can get along alone for so long. This makes Zari start questioning their romance.

A furious Ava tries to enter Galaxy Lanes but discovers it is sealed until the match with the Legends is over.

Zari, Nate, Jamie and Jeff come to the chasm in Alaska and then see Mick in the sky above them.

Mike the Strike is revealed to be using Earth as a bowling ball.

Buddy would like to kick the Pin Killers out of his alley, but the rules say they can stay as long as they are the league champs.

Spooner hurts her hand after it gets caught between two balls on the ball return.

Zari tries to talk to Nate about their relationship being doomed, but Nate says the alternative (i.e. not trying to make it work) is much worse.

Buddy suggests the way to beat the Pin Killers is to counter their negative energy with everything that makes bowling good - i.e. jokes and snacks and having fun.

Spooner finds out the reason Mick wears gloves all the time is to hide the burn scars on his hands.

Spooner gets Mick fingerless gloves that let him hide his hands but still bowl.

Zari uses Spooner's gun to shoot Mike the Strike's hand from a distance.

Astra bowls a strike to win the game by throwing the ball granny-style.

Sara throws the Earth back into space.

Buddy senses power in Constantine, but mutters to himself that power will be the death of him.

Buddy takes a photo of all the Legends together.

The normally paranoid Spooner suddenly doesn't think twice about making a bargain with aliens for a ride home.

Possibly the most random episode in the show's history but also one of the most fun.