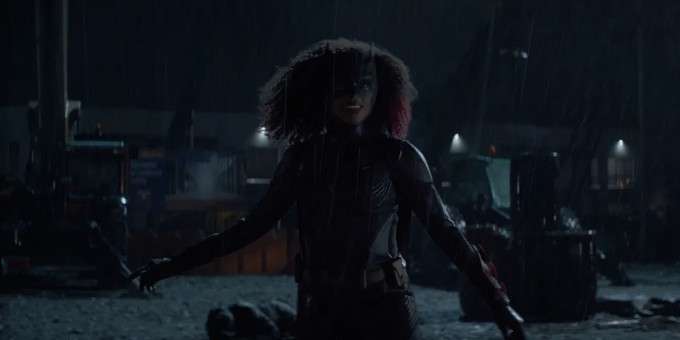 Ryan uncovers a sinister plot after a new villain dubbed Kilovolt attacks the community center she helped to repair. Meanwhile, Jacob faces a new challenge in his war on the False Face Society and Alice seeks out the mysterious Enigma with a new goal: forget about her sister.

The Batman comics of Alan Grant (character of Horton Spence).

The dream-like imager of Jacob's hallucination scenes is quite effective.

Luke makes a joking remark about Black Mask blaming Aquaman for killing his daughter. This is the first confirmation that Aquaman exists within the post-Crisis Arrowverse.

This episode marks the first appearance of Horton Spence - an idealistic reporter who alerts Batwoman to the connection between various social programs in Gotham City being attacked by criminals.

Horton Spence first appeared in the comics in Batman #475 in March 1992 and was presented as a partner to Vicki Vale, investigating a new street drug called Fever together. The two also dated for a time.

This episode confirms that Dr. Evelyn Rhyme is Enigma. Dr. Rhyme is an original character unique to the Arrowverse and has no connection to any other character named Enigma.

Community centers bring about a 10% drop in crime and a 15% increase in graduation rates from nearby schools.

According to Dr. Evelyn Sharpe, Snakebite attacks the hippocampus - the part of the brainwhich stores memories and emotions, targeting those memories most associated with regret or remorse. This triggers a hallucination where the user is able to alter the circumstance of the bad memory so they end happily.

Alice: I see you got my message.
Julia: Oh, the sad desperation came through loud and clear. Gotham’s most deranged diva reduced to making prank phone calls. What’s next? Ding-dong-ditch? Heh.
Alice: (pulling a knife) How about "ghost in the graveyard?"
Julia: (batting the knife away) Oh, you’re not gonna kill me. You’d just be lonely again. I mean, that’s why I’m here, isn’t it? With Kate gone because no one really cares about your every move. I mean, the new Batwoman doesn’t give a damn about you anymore, and that must drive you absolutely crazy. Well, crazier. What will Alice become now that her sister is dead, hmm? I mean, it’s the age-old question, isn’t it? If a lunatic throws a tantrum in a forest, will anyone hear? Guess Gotham’s not much of a playground without a playmate.
Alice: I don’t need a playmate. I need a partner.
Julia: Well, your last overture at partners ended with a knife in my gut, so…
Alice: (wincing in exasperation) Oh, I really need to work on my negotiating skills!

(Black Mask shoots one of his followers - a man in a clown mask.)
Black Mask: You’re forgiven. (turning to the rest of his followers) Does anyone else want to apologize for the fact that for the last two weeks not a single viable dose of Snakebite has been produced? Anyone? I got plenty of bullets to go around!

Mary: Look. I don’t care what you have to say I’m opening the place back up, so if you want to stop me, you’ll have to arrest me.
Jacob: I don’t want to stop you. I want to help you. Make this place a real clinic. Hire real doctors. I’ll even pay for it.
Mary: You know that there are some things that you can’t fix by writing a big check.
Jacob: What possible objection could you have to making this place legit?
Mary: Because it goes against the very reason I started the clinic, ok? I don’t ask for I.D., I don’t require insurance, I don’t report O.D.s or non-violent criminal behavior. I opened up this place to serve the people that you don’t see as legit.
Jacob: Come on. You haven’t even finished med school...
Mary: And yet yesterday, I saved a guy’s life, and, you know, for the first time since Kate died, I don’t feel hollow! I feel like what I did mattered! That I can make a difference in this crappy city, and you want to take that away from me, and for that, I will never forgive you.

As the episode opens, Batwoman is attacking her third Snakebite distribution center that week.

As Jacob Kane is watching the news report on Batwoman's raid, he is kidnapped and injected with Snakebite.

While high on Snakebite, Jacob hallucinates that he was able to save Beth while she was a teenager.

Batwoman is calling the leader of the False Face Society Black Mask as she has no idea who he is.

According to Luke, Kate never killed anyone's daughter as Batwoman.

The price of phone calls inside the prison has almost doubled since Ryan served time. According to Angelique, a ten-minute phone call is $22 and some change. It as $11.50 when Ryan was in prison.

Ryan encourages Angelique to flip on the False Face Society. She still refuses.

Ryan and Mary attend the opening of the new Sheldon Park community center Jordan Moore was working with. They are singled out for their help in getting it set up again.

Ryan meets with Imani, who is the head of the community center's tutoring program.

Ryan is asked about teaching martial arts classes at the community center.

The community center is attacked by a man with an electric gun. The media dubs him Kilovolt.

Luke determines that a weapon like the lightning gun costs more than a community center is worth.

Julia Pennyworth goes through her expense accounts from when she was searching for Kate and discovers that she spent two nights in Monaco with a layover in Valencia and a car rental in Madrid, but she has no memory of being in any of those places.

Alice calls in an anynonmous tip to The Crows, addressed to "Penny Dreadful," about a break-in at the Cartwright farm. Julia takes this as a sign that Alice wants to meet with her.

Julia makes reference to Alice stabbing her in 202.

Alice tells Julia about Enigma and asks for her help in finding her. This prompts Julia to think that maybe she already ran into and that is why she can't remember anything.

Jacob has a meeting with Dr. Evelyn Sharpe - a noted therapist with a practice in Gotham City, who joined the Crows special Snakebite task force. She has a PH.D in criminal psychiatry.

Dr. Sharpe somehow knows that Jacob used Snakebite. She says it is addictive enough that even one dose can hook a person.

Batwoman confronts Horton Spence about the community center attack. He tells he that several other social programs have faced similar attacks, such as the Narrows Midnight Basketball court being burned by an arsonist and the Diamond District tutoring center being shot up.

Spence claims he was investigating a link between the attacks when he was suddenly fired from the Gotham Gazette. He had just gotten his former editor to agree to take another look at his case.

Kilovolt tries to kill Batwoman and Spence, but her suit largely insulates her from the attack. Kilovolt gets away, but Ryan is able to get his gun.

Spence gets third degree electrical burns from the attack, but Mary is able to treat him with what few supplies she has left at her clinic. Unfortunately, his laptop was destroyed by the attack.

Luke traces the lightning gun to some tech being sold by a shady Russian defense contractor.

Luke is able to pull a partial finger print from the gun and traces it to a convict named Michael Kastrinos, who has been locked up in Edgewater Prison's Cellblock J for two years.

Alice discovers a to-do list written on Julia's boarding pass, which notes that she had a meeting with Dr. Evelyn Rhyme before flying to Madrid. Julia has no memory of this meeting.

Julia agrees to confront Dr. Rhyme about the meeting, while Alice investigates her office on Sixth Street.

Jacob has a private session with Dr. Rhyme where he admits that not saving Beth was his biggest regret and that not an hour goes by that he doesn't think about how he left her in the cell in Cartwright's farm.

Jacob admits he's tempted to try Snakebite again because of the good feeling he got from being able to save Beth, if only in a dream.

Jacob and Mary have not been speaking.

Ryan visits Michael Kastrinos in prison. He refuses to confess to being Kilovolt, but Ryan identifies the injury she gave him before he escaped.

Luke checks the security footage of the time Kilovolt attacked Batwoman and it shows Michael Kastrinos in his cell, where he is meant to be.

Ryan visits Angelique and asks if she knows anything about a secret way out of the prison. She does not.

Ryan also pleads, once again, for Angelique to turn on the False Face Society. This time she seems to consider it when Ryan says she can protect her.

The False Face Society has not been able to produce any Snakebite in two weeks as only Ocean and Angelique knew the formula.

Ryan calls Sophie Moore about the two names she got from Angelique. They're both managers at the Gotham Gun Club. Sophie is skeptical, but agrees to check into it.

Luke matches the security footage of Michael Kastrinos to identical footage from 2 weeks earlier. This suggests that someone in the prison is deliberately altering the footage.

Michael Kastrinos wasn't going to be eligible for parole for another decade, yet somehow got a hearing for an early release the day after the community center attack. Discovering this led Luke to look at all the recent paroles from Edgewater prison and led to the discovery that a serial arsonist was paroled the day after the midnight basketball program was burned down and an armed robbery enthusiast was released the day after the Diamond District tutoring center was shot up.

Luke determines that Edgwater's CEO Ellis O'Brien personally signed off on each of the early releases. Ellis was also on the executive board of the Gotham Gazette and would have the power to fire Horten Spence.

Roman Sionis shows up at Jacob's office with a Snakebite dose he claims was found in one of his employee lockers. He asks if Jacob can dispose of it for him.

Batwoman confronts Ellis O'Brien, who confesses that he was trying to destroy social programs that prevented at-risk children and repeat offenders from filling his prison.

Luke shows up in time to give Batwoman some back-up when he detects three guards with lightning guns coming for her.

Alice listens to Dr. Rhyme's recording of her session with Jacob.

Mary gives Horton Spence some antibiotics, since his insurance won't kick in for a few more weeks.

Horton spence was apparently rehired at the Gotham Gazette and given a promotion as well.

Jacob offers to pay for Mary to open a real clinic but she refuses his money.

Julia puts in for a transfer to the Crow's Security office in Berlin.

Sophie tells Ryan that a WITSEC team is moving Angelique into protective custody until Black Mask is captured, thanks to the DA accepting a plea deal.

Angelique is abducted by the False Face Society, after the Crows' Security caravan escorting her is attacked.

An enjoyable episode that plays out like a classic Green Arrow comic, with all of the ensemble being given a chance to shine.