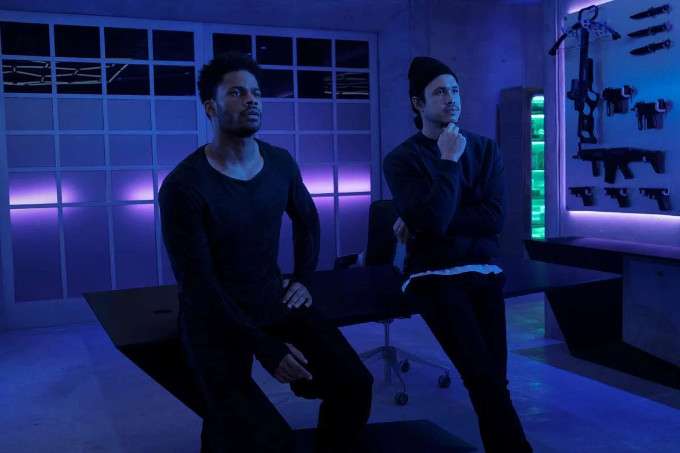 Khalil Payne moved to Akashic Valley hoping to get away from his past and the Pierce family he was programmed to destroy. Unfortunately, the past has a way of coming back to haunt you and when Grace Choi is kidnapped while on her honeymoon with Anissa Pierce and the Painkiller program incapacitates Thunder, it will fall to Khalil and his new allies to make things right, even as they put themselves in the crosshairs of a powerful new enemy.

Jordan Calloway delivers a subtle performance, altering the body language of Painkiller and Khalil to make them two different people.

The high-tech look of Akashic Valley is striking and immediately sets it apart as someplace unique in the Arrowverse.

The action sequences are fantastic.

The logic bomb installed in Khalil's head gives him control of the Painkiller program and it is further enhanced by regular meditation. However, it is not powerful enough to override a direct kill order. This is why Painkiller was able to take control when it saw Anissa Pierce.

The kill order enacted by the ASA is like a GPS, enabling Painkiller to sense his targets when they are close by.

The photographer's camera doesn't take actual photos. Instead, it acts as a scanner that measures brain activity. His employer has an interest in smart people.

Philky is able to use facial recognition software to track down the photographer who took Grace's picture.

Khalil plants a tracker on the photographer, but Philky is able to hack his car's GPS to find out where he was right after helping to capture Grace.

The nanotech in the heads of the kidnapping victims resembles the same tech used to create Painkiller, with part of their brain being partitioned, effectively cordoning off a large section like a computer. Philky determines their bodies are being crypto-jacked to harness the computing power of their brains for criminal enterprises like unraveling Bitcoins. The other half of the brain is locked into a meditative state. Sadly, Philky is afraid most of the crypto-jack victims will have serious brain defects.

Wo Man is said to be able to tap into the Akashic records: a place where the past, present and future exist simultaneously.

Khalil: (voice-over) "There is one. The path has been corrected. Go forth and conquer." These words came to me in meditation and led me here, to Akashic Valley, a place where I came to find peace of mind and body. A place where I pieced together a family and built a new life, so that I can conquer my own duality. Me, Khalil, who wants peace and vengeance. And Painkiller... who just wants a bloody war.

(Donald tells Anissa how Khalil saved his life.)
Anissa: It's a wonderful story, but I'm not gonna be convinced unless he saves Grace's life.
Donald: I know what's it's like to be one person on the inside and have to pretend to be someone else on the outside. To lead a double life. Struggle with identity. Khalil's struggle is different, but that's what he's dealing with. You should understand that.
Anissa: I never really had to hide who I was. I've always been out.
Donald: Well, then, you're one of the lucky ones, Anissa. (pauses) Or do you prefer Thunder?

(Inside Khalil's head, Painkiller and Khalil sit across from each other on a mat.)
Painkiller: I know you don't trust me. Maybe for good reason. But like you said, I didn't make me like this. Odell did. If you die... I die. Come on, Khalil. Deep down inside, your survival instinct... in all of us. You need me on this. That's why you're here.
Khalil: This technology is too important. It could set us both free. I can't take the risk of you killing the wrong person.
Painkiller: What does that even mean, bruh? "Set us free"? But what you're really saying is to set you free from me. I'm not stupid!
Khalil: I think it means we can stop warring with each other and finally live in peace. No more kill orders causing you pain. No more fear or worry of Odell or anyone else controlling you. You'll always be a part of me. It's just a matter of how.
Painkiller: Then trust me!
Khalil: I don't want Grace dead as a result of collateral damage. We'll go in, save Grace and then get the technology, And if things get real bad, then you'll finish. Understood?
Painkiller: I'll be on my best behavior.

Khalil and Philky's conversation regarding how they met and owe each other is some of the clunkiest "As you well know, Bob..." exposition ever. It's also a bit odd, given that the exposition for Donald later on works quite well.

Akashic Valley is a high-tech paradise, like Las Vegas and Tokyo rolled up into one. It has motorized smart car taxis, AI concierges in the hotels and holographic performers in the bars are not uncommon.

Grace and Anissa come to Akashic Valley and stay at a hotel called The Black Velet.

Grace is jumped by several men after having her photo taken. Anissa tries to chase after her, but is attacked by Painkiller, who poisons her.

Khalil and Painkiller fight for control of Khalil's body again. Khalil just barely wins, after giving Painkiller three changes to back down and not call Anissa a bitch.

Philky is a former ASA agent whom Khalil discovered, drunk and near homeless, after the ASA was shut down at the end of Season 3. The two partnered up, with Khalil recovering some of the ASA's dark funds in exchange for Philky attempting to neutralize the Painkiller program.

Khalil financed the construction of a lab under a bar in Akashic Valley. Philky works there as the bartender when he's not researching a cure for Khalil's condition.

The Painkiller program hadn't manifested once in the year since Khalil left Freeland, Georgia.

The photographer who took Grace's photo reports to a woman that his partner, Nick, was poisoned by Painkiller's punch to the chest. This gets her interest, even before the photographer mentions that one of the people they captured, Grace, was a shapeshifting metahuman.

The photographer was scanning the tourists n the Akashic Valley strip for smart people.

The photographer tells Khalill that the people he scans for are turned over to a mind cult of some kind.

Donald is a skilled herbalist and a former medic in the US Marine Corps.

Donald tells Anissa that he developed a bad case of PTSD when he left the military. He doesn't recall what happened the night Khalil found him, but he had over-medicated himself and had a few whiskeys. He can't recall if his overdose was an accident or an honest suicide attempt. In either case, Khalil saved his life.

Khalil told Donald all about the Pierce family, including their secret identities.

It is suggested that Donald might be gay or trans, as he makes reference to being one person on the inside and having to pretend to be someone else on the outside.

Khalil discovers six people in VR gear plugged into six laptops at the address Philky found. He takes the laptops.

Khalil asks one of the guards who he works for. The man says Maya before passing out.

Khalil and Philky consult with Wo Man - a  wisewoman who is said to know everyone in the valley and everything that is happening, legal or illegal. She is also a gun runner, who sells Khalil "a lot of guns."

According to Wo Man, Maya is into high-tech, mind-bending hardware that usually only the government  can access. She also says that saying her name to the wrong people can get you killed.

Wo Man owes Phiky several debts, which he calls in. She agrees to send him the location of Maya's retreat and schematics of it.

Khalil reaches an understanding with Painkiller regarding working together so they can be at peace.

Grace is able to free herself from her captivity and runs into Painkiller on the way out of Maya's base.

Grace is somehow able to sense when Khalil or Painkiller is controlling Khalil's body.

Donald, Philky and Anissa go to back up Khalil and find Grace as she's leaving the building.

Philky figures out that there's a self-destruct on the building.

Khalil persuades Painkiller to leave Maya's base rather than take a chance on chasing the tech.

Anissa tells Khalil that Jennifer has changed a bit, but they talk about him often.

Khalil asks Anissa not to tell Jennifer where he is, saying he needs some time before he is ready to see her.

Khalil, Donald and Philky agree to investigate Maya and figure out what she and her cult are up to.

Maya is revealed to be the daughter of Agent Odell and she knows who Khalil is.

We don't get to see any of Khalil's activities over the past year, but we are told of how he saved Philky and Donald.

Shockingly averted, given how often she's knocked out and taken hostage in earlier episodes, Grace is able to free herself and doesn't really need Painkiller to rescue her.

A solid back-door pilot that establishes a unique new setting for the Arrowverse and an interesting supporting cast to back Painkiller up. Sadly, given how many other spin-offs The CW has passed over, it seems unlikely this one will be picked up for a series, but it has more promise than Green Arrow and the Canaries did, if not as strong a legacy.
Posted by Starman at 3:55 PM