Legends of Tomorrow: Season 5, Episode 14 - The One Where We're Trapped on TV 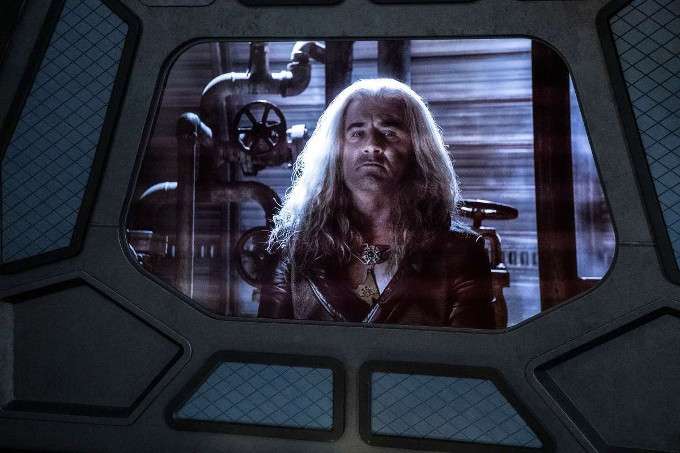 Plot
The good news is that Charlie managed to save the other Legends while rebuilding the world with her sisters and placing humanity firmly under The Fates' control. The bad news is she brought them back as characters in the new Loomworld's most popular television series. Can they fight their way out of their new lives and back to reality?
Influences
Stay Tuned (the heroes having to escape a TV world), 1984 (the aesthetic of Loomworld), Friends (The Ultimate Buds segments), Downtown Abbey (The Highcastle Abbey segments), Star Trek (the Star Trip segments) and Star Trek II: Wrath of Khan (Mick's costume is a call-out to the Ricardo Montalban Khan)
Performances
Talented though he is, I never would have imagined Matt Ryan in the role of a butler in a British period drama. Yet he does a fantastic job playing Mister Constantine.
Jess McCallan and Caity Lotz find just the right note in impersonating Leonard Nimoy and William Shatner without going over the top.
Artistry
The production team did a fantastic job of capturing the feeling of each show being parody and creating a nightmarish dystopia for Mona and Gary to escape.
The "Repress" song may be the best musical number in Arrowverse history.
Trivia Of Tomorrow
This episode marked the directorial debut of Marc Guggenheim, who was the co-creator of Arrow, Legends of Tomorrow and Vixen.
Instead of the usual intro, this episode opens with a special intro inspired by Russian propaganda posters, featuring The Fates.
The episode title is a nod to the naming convention of Friends episodes.
Technobabble/Arcana
The Loomworld verison of John Constantine reads Tarot cards and can cast a spell to send someone to someone else. This is how the Legends escape Highcastle Abbey and go to Sara Lance.
In Tarot, the Jack of Wands symbolizes daring exploits and dangerous challenges lying in the future.

There are computers in Clotho Productions that automatically spit out scripts for shows, which are connected to the life threads of people trapped within those shows.
Dialogue Triumphs
(Gary runs up to Mona on the street.)
Gary: Do I know you? You look familiar! Do you recognize me?! My name is Gary, but most people call me Crazy Guy!
Mona: Stay away from me, you weirdo!
Gary: Yeah, they call me that too!

(Zari 1.0 is trying to puzzle out why the world changed.)
Behrad: Sis, what do you think is happening?
Zari 1.0: I think you guys fought The Fates.
Everyone Except Zari: Fates Be Praised!
Zari 1.0: ... and you lost.
Lady Astra: Well? How is he Mr. Constantine?
Mr. Constantine: Lord Behrad is as advertised, (disdainfully) A foreigner.
(The Waverider is seen flying through space.)
Captain Lance (Voice-Over): Space. The fatal frontier. These are the adventures of the USS Faterider
Ms. Sharpe  (Voice-Over): Its mission; to seek out rebellious life forms.and disobedient civilizations. And blow them up with lasers.
(Captain Lance and Ms. Sharpe are beamed aboard the Gromulan vessel. Captain Lance immediately draws her phased and points it at Zari.)
Captain Lance : We're taking over this ship!
Zari 1.0: Sure. That works. We're your crew, anyway.
(Captain Lance looks confused.)
Zari 1.0: I know. It's complicated, but we're actually from an alternate timeline where you're our captains.
Ms. Sharpe: You're our crew?
Mr. Constantine: May I interest you in some rare Gromulan tea?
Lady Astra: Oh, it is grand to see lady adventurers in pantaloons!
Captain Lance: ... what kind of Gromulans are you?
Behrad and Nate: Ultimate buds!
Zari: All right, yeah. I know. It's hard to believe-
Captain Lance: No. It makes perfect sense.
Ms. Sharpe: We encounter this sort of thing all the time. You're probably our crew from an alternate timeline and you've been trapped in some sort of... judging by your mannerisms, late and early 20th Century prison dimension... which calls into question if we ourselves are existing in a prison dimension. It's perfectly logical.
Zari 1.0: (shaking her head) Ava, I love you.
John: Astra, look at me. What have I got to show for myself? 38 crap years of pain and broken promises. You wanna know what my original sin was? It was you, Astra. I rail against the angels and demons for being arrogant bastards, but I'm worse than the bloody lot of them. You know, I thought I could use your innocent soul as a bargaining chip to save your mother. Bollocks! If you're happy here, then... I will spend an eternity as ruddy Mr. Constantine trying to make it up to you and Natalie.
Astra: Is John Constantine really capable of such a selfless act?
(John steps back and assumes a proper parade-rest position, with his hands resting behind his back. When he speaks, it is with an upper-class British accent.)
John: Would it be acceptable to dine at half-past seven, Lady Astra? Mrs. Hutchens is running a trifle late.
Astra: (smiling) Perfectly acceptable, Mister. Constantine.
Sara: Ava, life is beautiful and terrible. All at the same time. But if we're only living part of it, we're not living at all.
Continuity
In the new reality, Mona Wu works in the Historical Sanitation Department. As the episode opens, she has just rewritten the history of Spartacus to make him a good worker who never caused trouble instead of the leader of a famous slave revolt.
One of Mona's co-workers, Geoffrey Burch, is killed by Atropos shortly after he asks Mona if she thinks that The Fates running everyone's lives is wrong.
In the new world, Gary is a street protester who is dismissed by most people for his claims that the world is wrong and The Fates are evil.
Everyone in Loomworld eats mush. Grey mush is the most common color. Other types of mush include green mush, purple mush, sticky mush, slimy mush and blue mush. Blue mush is apparently the best.

Mona watches a sitcom called Ultimate Buds. The main characters are Nate, Behrad and Zari. The show is a lot like Friends, with a similar over-sized loft apartment, Zari working as a chef like Monica and Nate working as an actor like Joey.
Nate is audition for the role of Robin Hood in a new show called Arrow.
The Pre-Crisis Zari emerges from the Totem and takes control of her Post-Crisis self. As revealed in 509, she has no idea what is happening in the real world and is confused by the sitcom world.

Zari 1.0 asks Nate if he remembers the other Legends and starts listing them. When she gets to Mona Wu, Mona (in the real world) wonders why the people on TV are talking about her.
Zari knocks down a door in the apartment. This leads into Constantine's house, which is apparently now the setting of a British period drama called Highcastle Abbey.
John Constantine is the butler of the Logue family. Highcastle Abbey is the ancestral home of the Logue family, currently headed by Lady Natalie Logue. It is located in Highcastle, Yorkshire.
Lady Natalie is currently trying to arrange a marriage for her daughter, Lady Astra, to Lord Behrad, who has apparently been written into the show as a Persian nobleman and Nate is his valet.
John is still able to do magic, but he tries not to, treating it as scandalous that he can do such things.
Zari tries to tell John about who he was and mentions his apprentice, Gary. This leads Mona to seek out the "Crazy Guy" in the real world.
Astra tells Behrad she wishes she were a man so she could go out into the world and live a life of adventure. He says there is no reason why she couldn't do that.
Astra jumps in as John is working a ritual to teleport Zari and Nate to Sara, resulting in all of them being sent into the reality of Star Trip as aliens called Gromulans..
Gary and Mona decide they need to break into Clotho Productions - the company that makes all the TV shows now.
In the world of Star Trip, Ava and Sara are co-captains of a space-ship. Sara is the hot-tempered one. Ava is the logic-driven one.
After convincing Ava and Sara that they are all trapped in a prison dimension, Ava mentions that had detected an odd transmission from the planet Kuldezax. The transmission turns out to be Mr. Parker's Cul-De-Sac from 507.
They attempt to make contact with the transmission, resulting in a giant hand pulling the ship out of space. This is revealed to be Mr. Palmer playing with a toy of the ship.
Everyone is brought into Mr. Palmer's house as The Community Helpers. Zari is a doctor, Nate is a road worker, Behrad is a sewer repair worker, Ava is a teacher, John is a handyman, Sara is a police officer, and Astra is a fire-fighter
Zari pleads for everyone to remember who they are. This prompts Mona to start writing into the script-writing machine, writing that it is at this point that the Legends remember who they are.
Everyone remembers the Pre-Crisis and Post-Crisis timelines, including both versions of Zari.
It is revealed that Charlie based the new lives she created for the other Legends based on what they all said they wanted most in 513. To wit:

* Nate gets to spend the rest of his life hanging out with his friends and having fun.
* Zari gets to be with her brother.
* Astra gets to grow up with her mother.
* John gets to protect Astra and see she has a good life.
* Sara and Ava get to be together and have adventures where nobody really gets hurt.
* Mick gets to be a lovable criminal and has hair again.
Charlie starts trying to rewrite the Mr. Parker script so that everyone goes back to the lives she made for them.
John and Astra are the last to be sent back. John is ready to fight, but Astra talks him down because she wants to see her mother and see if she's back to who she was or is just a character in a TV show.

Lady Natalie doesn't remember being part of another world, proving she's not really Astra's mom.
Sara and Ava decide to try and escape, when they get an transmission from their enemy, Dhan. This is revealed to be Mick Rory.
Lita and her mom are revealed to be alive in Loomworld.
When Sara and Ava decide to intentionally lose the fight with Dhan, Charlie is forced to cancel the show so they don't die in the story. This brings Sara, Ava and Mick back into the real world.
Sara is once again blind in the real world.
In Highcastle Abbey, Lady Natalie gives Astra a train ticket to London so she can see the world.outside of Highcastle. This inspires Astra to ask John to take her out of the show and back to reality, which he manages with a spell.

In Ultimate Buds Zari starts ranting about mush being awful and encourages the people watching to take control of their lives.  Charlie cancels their show as well.
Charlie is able to split Zari's thread in two, so that both Zari 1.0 and Zari 2.0 are alive.
The Legends reject Charlie's offer to write them a better life and walk out to face the real world, as Charlie sadly notes that she can't help them anymore.
Location
Loomworld - 2020
The Bottom Line
Peak Legends. The parodies are funny and well-executed. The ensemble is firing on all eight cylinders. There's some great character moments and the story sets up the end of the season quite well.