Legends of Tomorrow: Season 5, Episode 13 - I Am Legends 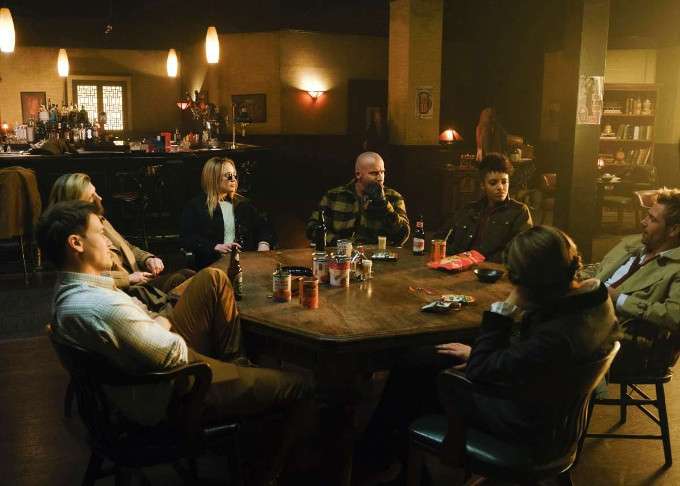 Plot
Stranded in Newcastle after The Fates steal their ship, The Legends must make their way to London and a Time Bureau safe-house where they can open a time corridor onto the Waverider. There's just one thing standing in their way; a night of the living dead, courtesy of Atropos. This leaves Gary fighting a one-man-war to keep the Loom of Fate out of the clutches of the Fates.

Influences
I Am Legend (title and zombie apocalypse theme) and Shaun of the Dead (zombie apocalypse in British setting)
Performances
Amy Pemberton has a lot of fun playing the hallucinatory Gideon.
Again, the chemistry between Tala Ashe and Matt Ryan as Zari and Constantine is fantastic.
Artistry
The production team do a great job capturing the jump-scares and general aesthetic of a zombie horror movie.
The final fight scene with the zombies overwhelming the Legends is brilliantly executed.
Trivia Of Tomorrow
Zari asks John how he can not own a car given where he lives and John says he always bummed a ride. This is a nod to the comics and how John never learned how to drive, always depending on his pal Chas Chandler (who was a cab driver) to take him where he wanted, free of charge.
Technobabble/Arcana
The Shadow Stone is an artifact in John Constantine's possession which is accompanied by a disembodied voice crying like a baby.
Zombies can sense the souls of the living and actively seek them.
Damned souls, like John Constantine, are ignored by zombies.
John knows an Ancient Egyptian spell that can temporarily stop a person's heart, making it seem like they are dead. He uses this to temporarily "kill" Zari, so he can carry her past the zombie horde in the scrapyard and get her into the van they are stealing.
Gary knows a simple obfuscation spell that can hide small objects.
Dialogue Triumphs
Sara: (dramatic music swelling) We're going to do it! We're going to go to London! Because we are immortal superheroes!
Zari: (music cutting out) Except me.
Sara: ...except for Zari. (dramatic music swelling again) And nothing is going to stand in our way!
(Cut to: The Legends standing at a bus stop, waiting, with no dramatic music.)
John: Have you ever considered the possibility that your brother's fate is doomed in every timeline? Apparently this bloke Rip Hunter used to say that, you know, certain things are just inevitable.
Zari: (cooly) Go to Hell, John.
John: You know, I've been there and back, love.
(Ava has just been shot in the head by a trigger-happy soldier. She gasps and sits up, groaning, the bullet popping out of her head as her wound heals and she is perfectly fine.)
Soldier:My God! These zombies can withstand headshots!
Mick: Since when do zombies talk, you idiot?!
Soldier: These super-zombies have become sentient!
(Ava is running through their assets trying to come up with an escape plan.)
Ava: Look, we've got a guy who turns into steel. We've got a shapeshifter, right? That's freaking amazing! We've got a kickass blind assassin! And a reformed thief turned romance novelist.
Mick: Who are you calling reformed?
Zari: If I die, I can't believe the last thing I'm going to see is your face.
John: Yeah, well ah,... better than those zombies out there, eh?
Zari: Debatable.
Continuity
As the episode opens, the Legends have 23 hours and 45 minutes of immortality left.
Gary went back on board the ship earlier to take care of his bunny.
Gary's pet bunny has Irritable Bowel Syndrome and bad gas.
Astra is revealed to have let Lachesis and Atropos onto the Waverider.

The Fates shut Gideon down.
Sara has a bad vision after taking Ava's hand but she denies it, saying she thinks the Chalice is messing with her powers. It is later revealed that she foresaw everyone dying in a bar in London.
Ava suggests they go to a Time Bureau safe-house in London and use a time corridor from there to get on the Waverider.
The Legends are forced to take the bus to London. However, they wind up hijacking the bus after it turns out nobody has any British currency on them.

Mick knows how to drive a bus.
Newcastle is 275.8 miles from London, traveling along the A1(M) and A1.
Astra agrees to help the Fates, but only if they bring back her mother, eliminate prunes from the new world and arrange for dogs to stay puppies forever.
Sara asks Ava to take charge of the team for this mission.
John starts smoking again, but Zari stops him.
Atropos uses her powers to raise the dead throughout England.

John makes reference to fighting zombies while facing Atropos before in 509.
Gary tries to fix Gideon and electrocutes himself. When he wakes up, he sees Gideon in the same human form she had in 408.
Gideon tells Gary to hide the Loom rings.
The bus breaks down, forcing John and Zari to go look for alternate transpiration.
Nate is not good with mechanical things.
Lachesis shows Astra a vision of her mother dying in the hospital and says that is what will happen if they rewrite history to bring her back to life.
John Constantine never met Rip Hunter, but knows of him.
Atropos practices her knife-throwing with the wanted poster of Jonah Hex hanging in the parlor of the Waverider.
Gideon seemingly distracts Atropos by bunny-hopping past the parlor.
Gary steals the Loom Rings at the prompting of Gideon.
Ava and Sara both hate free-form jazz music.
Ava survives being shot in the head by trigger-happy soldiers who think the Legends are zombies.

Ava, Sara, Mick, Charlie and Nate are captured by soldiers who think they are "super-zombies" resistant to head-shots, who learned how to talk.
Astra figures out that Gary is still on the Waverider, based on the half-eaten carrot he left behind.
Gideon suggests that Gary steal a Time Corridor to get the other Legends.
Joe and Zari go to a scrapyard John knows about to steal a car. Unfortunately, the scrapyard is full of zombies.
After getting briefly cornered, John is able to temporarily kill Zari with a spell and they steal a van.
John knows how to perform CPR and uses it to restore Zari to life.
The rest of the Legends are able to escape from the military transport they are locked in, after Mick remembers being locked in the same type of vehicle and that they have a weak door that Nate is able to break in his steel form.
After escaping, The Legends are 80 miles from London when John and Zari catch up to them.
Gary is caught by Atropos, but is able to hide the rings with a simple obfuscation spell.
The Time Bureau safe-house in London is built into a pub, but it's been abandoned by the agents that were working there, as they are out dealing with the zombie apocalypse.
Ava is able to access the Time Courier storage unit but finds that none of the Couriers are charged.
Zari and John winding up making out in the backroom of the pub after having an argument.

Gary asks Astra if Lachesis showed her any good memories of her life with her mother before she died.
As they wait for the Corridor to charge up, the Legends talk about what they'd most want out of life once they use the Loom of Fate.
Nate says he wants to end every day like they are now; sitting around with his friends.
Sara and Ava say they're happy the way they are now, flying around in their ship and having adventures together.
Mick says he'd like to be a criminal again, because he misses how simple his life was then.
Zari says she just wants to be with her brother and happy, but would like to do something to make the world more inclusive.
John says he'd throw a multi-continent rager but confesses that before that he'd really want to do right by Astra and make sure she grew up right in a big house and that he could keep an eye on her.
Ava figures out that Sara was lying about not having a vision before and losing her powers and that she didn't want to tell anyone what she saw.
Sara admits that she foresaw the courier wouldn't charge before zombies managed to get in the building and killed her.  Sara says, however, that she's sure Ava will lead the team to victory and they will bring her back once they have the Loom working.
Astra's mom loves strawberries. She recalls one day her mom took her picking strawberries on a farm.
Gary talks Astra into betraying the Fates and trying to save her mother again, only for Atropos to kill her.
Ava gives the charged Courier to Charlie, saying that she trusts her to find a way to outsmart her sisters a second time.
Charlie escapes to the Waverider.
Atropos kills Gary, after he brings the rings back and gives them to Charlie.
Charlie says she's done running and that it's time for the Fates to get to work.
Location
The roads between Newcastle and London - 2020

John Constantine was once called in by Old Man Joe of Joe's Scrapyard to deal with a demonically-possessed  '75 Fiat.
The Bottom Line

A brilliant send-up of zombie apocalypse movies with a lot of great character moments that utilize the whole ensemble well.
Posted by Starman at 10:06 AM