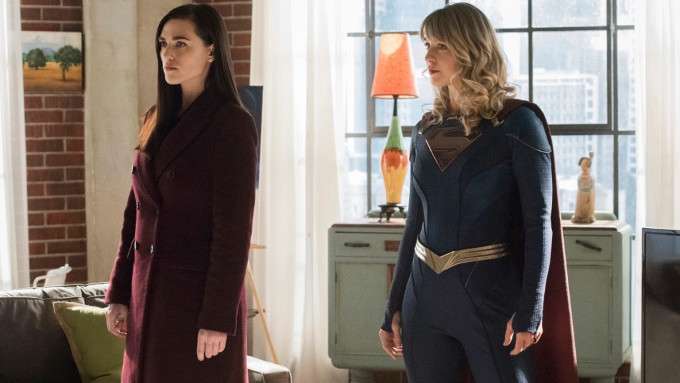 Plot
Lena and Kara make amends, just in time for Leviathan to declare war on Supergirl and her allies. Alex unveils a new vigilante identity as Brainiac-5 launches his own attack on the alien group in defiance of Lex Luthor's plans for the secretive organization. But will they all be able to stop Obsidian Platinum from triggering an extinction event?

Influences
The JLA Comics of Joe Kelly.and Harry Potter and the Deathly Hallows (Dreamer compares their disguise gambit to the plan to sneak Harry away from the Death Eaters)

Goofs
The green-screen when Alex shows off her new costume isn't blended well.
Eve says that Leviathan is planning to kill 4 million people, but the rest of the episode acts like she said 4 billion. (Probably the later number is accurate, and Eve is a bit panicked, thinking of her mom. Also, she did just wake up with Supergirl over her and is probably wondering if she knows that Eve killed her stepfather.)

J'onn is able to send a message to Rama Khan telepathically, but hasn't been able to track him down?
Jesse Rath is capable of some stupendous, subtle acting. This is the total opposite of what he delivers as he struggles through keeping his hand on a touch-pad.
Artistry

The visual of all the people forming a circle around the Earth is a strong one.

The two other Leviathan members who fight along with Rama Khan are identified in the credits as Tezumak and Sela. While these are also names of the League of Ancients who were adapted into Supergirl's version of Leviathan, the comic book characters are quite different.
In the comics, Sela was an African warrior woman who was a master tracker and swordswoman. The Arrowverse version is a Caucasian woman with red-hair who has vague air-based powers that includ creating lightning..

In the comics, Tezumak was a Mesoamerican warrior who gained enhanced strength and fighting prowess from an enchanted suit of bronze armor as well as telepathy strong enough to blunt Martian Manhunter's powers. In the Arrowverse, Tezumak is a man with African features, who has fire powers as well as some kind of telepathic ability that allowed him to daze Dreamer long enough to attack Martian Manhunter..
While Dreamer is standing before a vending machine, Miss Martian says that she recommends the Chocos. This is a nod to the love that all Martians seem to have for Chocos cookies in the comics.

Leviathan's base makes use of a proto-focused radiation shield, which slowly kills anyone who enters their base without wearing a special pin.

J'onn made Alex a costume that transforms whatever she is wearing into her new hooded super-suit. It also somehow gives her smokey eye make-up.
Braniac-5 estimates that he will survive for 12 minutes after being exposed to Leviathan's radiation shield.


Dialogue Triumphs
Lex: (upon seeing the Leviathan base) You know... I pride myself on seeing things. Connections where others see only coincidence. Pathways where others see only walls. I anticipate everything. But I must admit, I didn't not except you to live in a casino.
Brainiac-5: You think I'm just gonna sit back while Leviathan murders my friends?
Lex: Former friends. And yes, I think you will. Because if you get on that ship any sooner, you'll die with them.
Brainiac-5: Leviathan is the enemy, Lex. Not Supergirl, not J'onn J'onzz. Not Dreamer.
Lex: You're right. They're heroes. They would happily sacrifice themselves to save the world. (smiling) Maybe they'll even thank us.
Brainiac-5: I pushed away everyone I loved because you told me I must. You were right. This planet... my friends... It's worth it. I called you here simply because... I don't want to die alone.
Lena: I have done terrible things to protect myself and the people I love. But it has never kept me safe from pain. It's just brought me a new kind of misery. And I moved further and further away from the person I was, until one day I woke up and I was utterly alone.
Dialogue Disasters
J'onn: Oh, it was a scream of delight. Thank H'ronmeer. (Some detective, not being able to tell a happy scream from a scared one from 10 feet away.)
Continuity
Lex is finally allowed into the Leviathan base and meets Rama Khan along with Gamemnae.

The Leviathan base is protected by a shield that slow irradiates anyone who enters it without protection.

It is revealed that in addition to the Staff of the Shadow Realm, Lex also recovered several rings that increase the powers of Leviathan's other members. This, coupled with the Kryptonite taken from the DEO, should allow Leviathan to destroy Supergirl.
Miss Martian and Martian Manhunter agree to impersonate Supergirl, to draw Leviathan's fire while Kara and Lena go to Lena's lab, so Lena can build her a Kryptonite--Proof Armored Costume.

Alex reveals the new costume J'onn made her to the rest of the team.
Gamemnae admits that there is one above her, a her, who rules Leviathan.
Gamemnae allows Lex to keep her pin, saying he's now one of Leviathan.
Lex refuses to give his pin to Brainiac-5, saying they need to wait until after Supergirl and her friends are dead to strike at Leviathan.
Alex and M'Gann face the lightning-wielding member of Leviathan, Sela.
J'onn is burned by Tezzumak, as he and Dreamer face Rama Khan.
Kelly calls Alex and tells her she hasn't heard from William since he followed after Eve Tescmacher.

Alex says she and Kelly will look for William, while Kara waits to get her new suit.
Brainiac-5 summons his female doppelganger and explains to her his plan to enter Leviathan's base on his own and trap them in a bottle, as his ancestors used to trap planets. This will kill him but ultimately save his friends.
Kelly and Alex break into Obsidian North and acquire Eve's encrypted IP address.
Lena makes reference to her trip to Kaznia with Kara in 420.
Kara expresses her anger with Lena not realizing she only lied to her to protect her and Lena manipulating her for much more selfish reasons.

Lena and Kara go to save William once they track down where Eve is.

Eve shoots William, but Kara cauterizes the wound with her heat vision.
Miss Martian, Dreamer and Supergirl briefly fight with Leviathan as Lena helps Eve and William escape.
Lena helps to cover Kara's secret identity unprompted when William asks about warning her.
Eve tells Supergirl about how Gemma Cooper is Gamemnae and part of Leviathan and that they plan to attack the Obsidian North Unity Festival.

4 million people are expected to be part of the festival, according to Eve.
M'Gann talks with Nia about how she clearly had a vision that troubled her. Nia tells her about how she keeps seeing Braniiac-5, but how she's sure it's just her missing him and not truly part of her dreams.
It will take 10 minutes for Brainiac-5 to upload his shrinking code into Leviathan's systems.

Brainiac-5 successfully traps Leviathan, only for Luthor to steal the bottle holding them.

Supergirl keeps her promise and recovers Eve Teschmacher's mother and brings her to Lena's lab.

Dreamer finally realizes her visions were warning her that Brainiac-5 was in danger.
Kara and Lena reconcile.
The episode ends with Lex giving the bottle holding Leviathan to Lillian Luthor.

The Bottom Line
An uneven mess, much like Season 5 itself, even allowing for the rushed finale because of the COVID-19 crisis. The action sequences feel like filler meant to occupy the supporting cast and the new villains are poorly defined. Also, for all the series has tried to hang a lampshade on how there are some crises that Supergirl can't face by giving a heroic speech, she literally saves the world by giving a heroic speech. Meanwhile, everything else done to stop the villains comes about because of... uh, Braniac-5 and William Dey. That being said, Jon Cryer is still a magnificent villain for what little time he has on screen and the scenes involving Kara and Lena making up are as good as we could have hoped for.
Posted by Starman at 4:54 PM