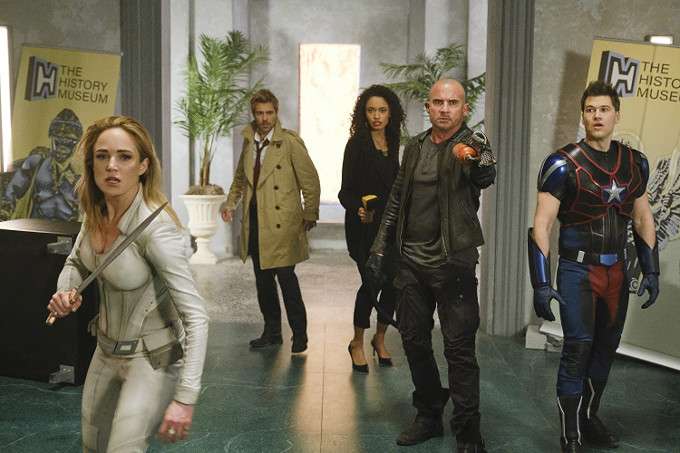 Plot
Trapped in a world they never made, the Legends must fight the Fates for the freedom of all that is. But there's no guarantee all of them will survive the battle to come or that the world will return to what they remember...

Influences
1984 (the aesthetic of Loomworld) and Night At The Museum (the battle with the Encores in the museum)
Goofs
For some reason, the Encores let The Legends leave the room to grab weapons from the Hall of Bad Ideas.

Mona and Gary just disappear from the episode and aren't there for the final part. (Then again, neither of them would fit in at a punk show.)
Performances
The whole cast bring their A-game, but if we have to single out a single MVP, it has to be given to Tala Ashe for playing both Zaris.

Artistry
The mock commercial for the FateWatch looks like a real commercial.

The FX work to get the two Zaris to interact is flawless.
Technobabble/Arcana
Magical power usually passes from mother to daughter. As Natalie Louge was a natural conduit for magic, so too is Astra.
Without Gideon to power the Waverider, the only way to make it able to fly manually is to use a superconductor to transfer a huge surge of energy to the Time Core. In this case, Zari uses Nate in his steel form and a pair of jumper cables.
When a god dies, any gift they bestowed upon a mortal dies with them. In this case, Sara's sight is restored and her second-sight disappears after Atropos dies.
While trying to repair Gideon, Behrad and Zari 1.0 reroute the navigation system and patch into a secondary hard drive.
John works a sleeping spell on Charlie to knock her out.
Zari 1.0 figues out a way to track the Loom using the FateWatch, but it requires an external computer with GPS and WiFi capabilities. She winds up dissecting Zari 2.0's smartphone to get the parts she needs.
John works a spell that lets him phase through the floor to avoid getting hit.
Dialogue Triumphs
Lachesis: Clotho... I have let you play your childish game long enough. It is time to grow up and face the music.
Charlie: The Legends are my friends.
Lachesis: Are they? Time and again they have sown chaos into this world.
Charlie:Well, sometimes they screw things up for the better. I mean, think about it. Encores, that wasn't their fault, and they've been mopping that up all year.
Lachesis: That's true. The Encores are not the Legends' fault. They're yours. Ambitious villains are the product of the chaos you birthed.(gesturing to the crowd of worshipers)  Look at these people now! Do you see a future Joseph Stalin amongst these lambs? Of the three of us, you always loved these mortal creatures best. What do you think they would want? More choices or a lifetime of peace?
(Nate is standing by the Waverider controls holding both clips of a pair of jumper-cables.)
Nate: You sure this is going to work?
Zari 1.0: Honestly, I'm 60/40. But I believe in you.
Nate: I don't want to do this.
Zari 1.0: I know. (kisses him)
(The Legends look around and see that everyone is talking into their watches, asking them what to do next. They also see the ads for some device called a FateWatch.)
Ava: Uh, what are the chances that everyone's watches got a weird update over the last four months?
John: I'd say one in a monkey's ass, love.
Sara: Great. So not only do Charlie and her sister have the Loom back, but now it's wearable.

Zari 1.0: I'm hanging out with myself and myself has the hots for John Constantine.
(Astra has told John about how she abandoned the memory of her mother to survive Hell.)
John: You listen to me, all right? You are still her daughter.
Astra: (chuckles) Whose? Natalie or Lachesis?
Sara: We were all in our own worlds, but a twist in our stories brought us together and made us a family.
Charlie: But humanity, they've made so many mistakes.
Sara: Sometimes a mistake is really just destiny.
Charlie: What, you learn that being a Paragon?
Sara: No, I learned that being a person

The first team runs into Gary and Mona, who guess that the Waverider was taken to The Forbidden Dump along with all the other artifacts that conflict with the new reality.
Gary and Mona abandon the Legends at the dump because it will be suspicious if they are gone for too long.
Behrad is experiencing chest pains, which he blames as acid reflux from too much green mush.
The second team are recognized as the actors from the shows by a group of fans. John agrees to give them an autograph in exchange for their clothes, which are used to infiltrate the Fates' temple and destroy the Loom of Fate.
Atropos and Lachesis figure out the Legends have escaped when they see the man wearing Constantine's clothes in line at the temple and after one woman asks for her shows to be uncancelled..
Sara cannot see the Loom, but can feel the energy of it through her foresight.
Once they find the Waverider, Mick leaves to find Lita.

John plans to use Astra as a magical conduit to juice up his own spell so he can disrupt the Loom of Fate. Unfortunately, the spell fails after Asttra starts having visions of Lachesis instead of thinking of her mother.
Gideon was removed form the Waverider, makig it all but impossible for the ship to function normally.
Zari is able to jump-start the Waverider using Nate in his steel form as a super-conductor.

Sara is able to hold her own in a fight with Atropos, thanks to her power to see the future.
The Loom is destroyed after Sara cuts Atropos' life thread after Zari 2.0 and Behrad blast her into the Loom with their totem.
The Legends escape in the Waverider but just barely manage a time jump and crash in the Forbdiden Dump again.
Sara's sight is restored but she can no longer see the future. John says this means Atropos must be dead, since she was the source of Sara's power.
The Legends find out they jumped four months into the future.  The world has now changed so that everyone is dependent on a new electronic device, the FateWatch, to tell them what to do.

In Loomworld 2.0, the Temple of The Fates is now a history museum devoted to showcasing "the truth about free will and the atrocities that it brought upon humankind."
The museum features a Hall of Bad Ideas, a Hall of Villains and a a Hall of Atrocities.
The Hall of Bad Ideas contains displays devoted to the Flat Earth theory, spring-shoes, the Shake-Weight, energy drinks, glitter, the Flowbee, the pogo-stick, cigarettes (much to Constantine's annoyance) and Sisqo's "Thong Song".

Nate, unsurprisingly, likes the Thong Song.
Behrad has a flashback to his original death at the hands of ARGUS agents in the pre-Crisis timeline while trying to repair Gideon.
The Hall of Villains contains displays devoted to an unnamed caveman, an unidentified figure in gladiator armor, Charles Manson, General Custer, Joseph Stalin (#10), Marie Antoinette (#12), Vlad the Impaler (#14), Caligula and the Legends (#2).

The Legend display shows Sara, Ava, John, Mick, Behrad and Nate, with Sara and Nate in their superhero suits.

Mick, Lita, Gary and Mona show up at the Waverider. Mick says it has been four months since they vanished.

According to Mona, when the Loom of Fate was destroyed, people panicked as their memories of the old world came flooding back and nobody could remember what was real or not or what to do.

Charlie is living in the museum as the #1 ranked villain.
Left all alone, Charlie was broken by Lachesis and convinced she was responsible for all the bad things in the world.
According to Charlie, Lachesis rebuilt the Loom and restored order.
Astra reveals to John that the price of Lachesis protection in Hell was abandoning her humanity.
The Legends cite The Beatles and he musical Mama Mi 2a! as good things that came of free will, trying to cheer up Charlie. Charlie counters with the fact that The Beatles also inspired Charles Manson's cult and ABBA nearly inspired Napoleon to kill The Legends (311).

Charlie also cites the song "Octopus Garden" as one of humanity's greatest mistakes. Gary considers it one of the best things to come of free will.
Zari 1.0 builds a device to track the signal of the Loom of Fate.
The Loom is tracked to somewhere inside the former Clotho Studio's building.
The Loom is revealed to be Gideon, who has been reprogrammed to run the FateWatch program and tell everyone what to do.
Zari 2.0 disables the Loom network by unplugging Gideon.

Astra replaces Charlie during the grand opening of the museum and calls Lachesis out, daring her to smite her and pointing out she can't do it.
The villain "displays" in the museum are revealed to be paralyzed Encores.
Lita breaks Charlie out of her funk by pointing out that she's the product of complete and utter chaos and that life may be messy but that makes it beautiful.
Charlie and Lita deiver the cache of Hell-Weapons to the rest of the Legends so they can finally end the Encores.

Charlie confronts Lachesis and forgives her for everything she did. She doesn't kill her, leaving her to live out her life as an ordinary mortal.

Behrad's chest pains are revealed to be the result of his wounds from the original timeline reopening because of the presence of Zari 1.0.

Zari 1.0 goes back inside the Totem to save Behrad's life.

The Legends go to London in 1977 to watch The Smell (who have apparently been resurrected post-Loomworld) perform.

Mick agrees to take Lita back in time to see the Runaways play next weekend.
John asks Astra what she plans to do now. She says she thinks she'll live in this place in the sticks and that she thinks she has the rent covered. This leads her to gives John his soul coin.
Charlie decides to stay in 1977 with The Smell.
Sara gets abducted by some kind of alien tractor beam which the rest of the team fail to notice.
Location
Loomworld
Loomworld 2.0
London, England - 1977

A fun finale, whose only flaw is trying too hard to set up a fight-scene to the Thong Song to justify the punny title. Still, for a show famous for its great cliff-hanger endings at the end of the season, this one may be the best yet. It will be a long wait for Season 6 and the Legends going into space.