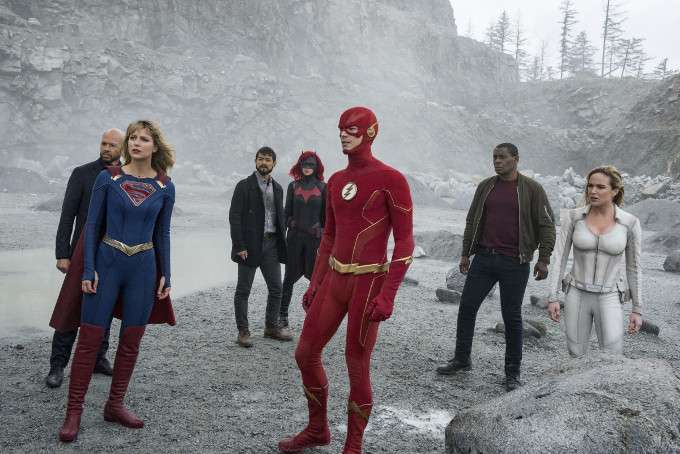 The positive-matter multiverse has been destroyed!  The Paragons are trapped outside of space and time in Vanishing Point. Thankfully, Oliver Queen has become someone else. He has become something else. And as the origins of the Monitor and Anti-Monitor are revealed, Oliver Queen will return to life with one goal; to save his reality!

The origin of the Monitor here doesn't quite gel with what we saw in earlier episodes, where it seemed liked he was unaware of the existence of The Monitor and had no idea what was causing the Crisis. Here, it is clear that he's known about the Anti-Monitor for quite some time and was responsible for releasing him, if not creating him.

How did the Anti-Monitor become imprisoned in a way Nash Wells could release him, when it seems like the Anti-Monitor was released by Mar Novu in the first place and Mar Novu was helpless to do anything 10,000 years ago?

How exactly is Ryan Choi supposed to be hurting the shadow demons?

I dare you to not cry during the final scene as Oliver Queen dies a second time in the arms of Barry Allen and Sara Lance. Stephen Amell, Grant Gustin and Caity Lotz sell this scene perfectly.

The special effects for the battle between The Spectre and the Anti-Monitor are some of the best in the show's history.

The script for this episode was co-written by Marv Wolfman: writer of the original Crisis on Infinite Earths comics.

The opening prologue is set on the planet Maltus 10,000 years ago. In the DC Comics Universe, Maltus is the planet which spawned three long-lived races that moved on from Maltus to other planets. These races became known as The Guardians, The Controllers and the Zamorans.

The opening prologue reveals that Mar Novu conducted experiments to observe the beginning of time that resulted in the creation of a link between the positive and anti-matter universes. In the original Crisis on Infinite Earths comics, the multiverse (including the anti-matter universe) were created because of an Oan scientist named Krona, who violated a similar ban The Guardians had upon trying to watch the creation of the universe. Krona's actions were said to have introduced evil into the universe.

The general plot of this episode is taken directly from Crisis on Infinite Earths #10. In that issue, The Spectre assembled two groups of heroes and villains. The villains, led by Lex Luthor, went to Oa to stop Krona's experiment. The heroes and The Spectre went to fight the Anti-Monitor at the dawn of time and stop him from preventing the universe from being born.

Ezra Miller, who played Barry Allen in the 2017 Justice League movie, has a cameo playing his version of The Flash.

The heroes needed to save the universe gathering at a place called Vanishing Point seems to be a nod to Zero Hour: the semi-sequel to Crisis on Infinite Earths in the comics. That story saw the heroes needed to stop the villain Parallax from resetting time and rebuilding the universe in his own image meeting at Vanishing Point; the hide-out of a group of time-cops known as The Linear Men.

As Barry accidentally runs into a memory and startles John Diggle and Laurel Lance, he says "Oh boy." This may be a nod to Quantum Leap and how Dr. Sam Beckett said the same thing when he time-traveled into an awkward situation. It could also be a nod to a running gag from Elseworlds, which also paid homage to the show and established Barry as a "Leaper."

Lex refers to himself and Mar Novu as "the brave and the bald." This is a pun on the classic comic The Brave and The Bold.

The Monitor's armor protects him from coronal radiation.

The device which allowed Mar Novu to travel through time was a quantum portal.

(Lex and Ryan have just finished building a teleporter.)
Sara: So we send somebody to test it?
J'onn: I'll go.
Kara: No. We've lost too many good people already. (deadpan) Thanks for volunteering, Lex.
Lex: Well, that's very cold. Is it because I killed your parallel reality cousin?

Ryan: (looking around the forest of Maltus) Why doesn't this alien forest look more alien?

(Kara has just broken down the door into Mar Novu's lab.)
Kara: Mar Novu, do not trust this man with anything! Give him a knife for his food and no matter how much he thanks you for the dinner he'll stab you right in the back with it.
Lex: Or the front. I'm not choosy.

Ryan: Trillions of other people's lives, an infinite number, will be lost if you go through with it! It's not worth it!
Mar Novu: You just show up here as if by magic and demand belief.
Ryan: The fact I'm here at all should be enough to convince you.
Mar Novu: (nodding, considering this) You are a remarkable individual.
Ryan: Funny. A new friend of mine just told me I'm special. I didn't believe her until now.

Kara: I wonder, is it a double-cross if I never trusted you in the first place?
Lex: Why do you Kryptonians always have to take things so personally?!
Kara: You tried to kill my cousin! You tried to kill me! You betrayed Lena! Left her with nothing but a ruined name and a broken heart!
Lex: All I did was tell her the truth - something you never had the courage to do. Don't take it personally!

The Spectre: All of you, listen to me. This is why you were selected. You're Paragons.
Ryan: Yeah. I'm still a little unclear on what all that means.
The Spectre: It means you're powerful enough to hold the line, to buy us the time we need.
Kate: To do what?
The Spectre: Rebirth the universe.
Sara: What, like, a do-over?
The Spectre: The Dawn of Time is the only place it can happen. I'll light the spark. You fan the flame.
Lex: And how do we do that?
The Spectre: You'll know when it's time.
Lex: (annoyed) Why do you cosmic types always have to be so obtuse?
The Spectre: If I knew, I'd tell you.
(There is a long pause before The Spectre shrugs apologetically.)
The Spectre: I don't.

The Spectre: (To The Anti-Monitor) You have failed this universe!

Oliver: You remember what I told you?
Barry: Dying is the easy part.
Oliver: I'm at peace. The real heroes They're the ones that have to keep going. So keep going And don't ever stop. This world, this new world It needs both of you.

10,000 years ago on the planet Maltus, Mar Novu and his wife Xneen attempted to observe the creation of the universe. Their experiment resulted in the creation of a breach between the anti-matter universe and the positive-matter multiverse. It may also have fractured a singular universe into a multiverse, but this point is unclear.

Several months have passed since Crisis on Infinite Earths - Part 3.

Barry vanished mysteriously. It is later revealed that he tried to enter The Speed Force and, while only gone a few seconds from his perspective, everyone else thought he was gone for months.

Batwoman, The Spectre, Martian Manhunter, White Canary and The Flash try to go directly to the dawn of time, but get lost in the Speed Force.

Barry meets another version of himself from another Earth while in The Speed Force.

Barry winds up in the Queen Consolidated lab where he first met Oliver Queen in A208.

Kate Kane winds up in Ray Palmer's office where he confronted Oliver Queen in A317. She realizes that she needs to learn to trust people, just like Ray and Oliver eventually learned to trust each other.

Sara Lance winds up inside her own dead body in the Arrow Cave, as John Diggle and Laurel Lance discuss her death. This seems to take place during the events of A302, just before Sara was buried, but does not correspond to a scene from that episode.

Barry encounters Oliver in his memory of the battle with Dr. John Deegan in S409.

Oliver tells Barry about the bargain he struck with The Monitor: to give up his life in place of Barry and Kara.

Martian Manhunter winds up in the STAR Labs hanger where Supergirl and Oliver Queen first met in L207. He gives them a speech about needing to work together despite their differences before Barry finds him again.

Lex Luthor is revealed to have given himself super-powers (i.e. the ability to shoot energy blasts) when he rewrote the Book of Destiny.

Lex Luthor has seen the movies Aliens and Predator.

The Anti-Monitor still comes to exist, as there will always be one version of Mar Novu tempted to attempt his experiment regardless of the warnings.

The Paragons use the page from the Book of Destiny still held by Lex Luthor to imagine a new universe into being as The Spectre fights the Anti-Monitor.

The Anti-Monitor is defeated and Oliver Queen dies a second time as the Arrowverse is reborn..

A surprisingly flat episode, given all that is at stake. The heroes getting lost in the Speed Force feels like filler and the subplot on Maltus is a shaggy dog story. The scene with Ezra Miller is completely unnecessary. (Indeed, it was added at the request of WB Films after the rest of the event was filmed, in case they ever get around to making that Flashpoint movie.)  What's worse is how little explanation there is just what Mar Novu did and to what degree he's responsible for creating or empowering the Anti-Monitor and the multiverse. Even Oliver Queen's second heroic sacrifice is a pale imitation of what we saw in the first part of the crossover and its the best part of the episode!
Posted by Starman at 4:12 PM