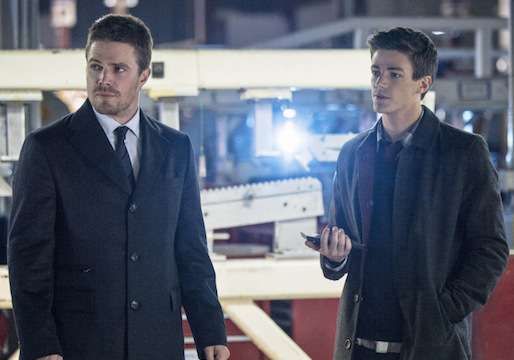 With his mother free from jail, Oliver Queen is quick to try and reintroduce Moira to both her company and high society... despite Isabel Rochev's vocal objections to both.  He soon finds himself distracted as Queen Consolidate is robber by a burglar capable of breaking down reinforced titanium doors with his bare hands.

Enter Barry Allen - a crime scene investigator with the Central City Police Department.  Allen claims he's working on a similar case involving a super-strong burglar.  But is the young police officer hiding something besides his obsession with the Starling City Vigilante?  If so, he's not alone.  For Oliver Queen knows something about people with powers beyond those of mortal men.. and he's fought them before!

At the same time, Roy Harper launches an investigation into the disappearance of one of Sin's friends in The Glades.  The trail leads to a dead body bleeding from the eyes - something that Roy finds far more interesting than The Arrow.

On the island, our heroes are in a race against time and Ivo's men, as they hunt for the submarine containing the Mirakuru drug that is Slade's only chance of survival.

The Flash: Rebirth (Barry Allen's origin in Arrow corresponds to his back-story in this book - no surprise as both were written by Geoff Johns), JLA: Year One (Oliver as the first active superhero, working as Green Arrow for over a year before the emergence of The Flash and Black Canary), Green Arrow: Year One (the island sequences), Marv Wolfman's Teen Titans (Brother Blood, his cult, and the story of how Slade Wilson got super powers ) and J.T. Krul's Green Arrow run (the drama between Moira Queen and Isabel Rochev).

Felicity's red dress with the cleavage window in the first part of the show seems decidedly unprofessional.

How did Merlyn's actions with The Undertaking violate Ra's Al Ghul's code of honor?  Ra's isn't exactly afraid of causing collateral damage and killing millions, as fans of the comics and even Batman Begins know.  503 dead shouldn't even ping on Ra's personal radar.  (Perhaps Ra's objected to the use of an earthquake machine that might cause untold environmental damage or to Merlyn taking such actions over a personal vendetta?)

Was it really necessary to knock Barry out with a blow dart at the train station?  If they're going to expose Ollie's secret identity to Barry anyway, surely Diggle and Felicity could have just talked to him?

Susanna Thompson has been given surprisingly little to do this season.  She honestly doesn't get much in this episode either, but she steals every scene she is in - from her first cool encounter with Isabel Rochev to her final confrontation with Merlyn at the episode end.  Her name dropping of Ra's Al Ghul is easily the best moment in an episode full of great moments.

The thunder-rolls and lightning-strikes throughout the episode are a nice touch.

The musical theme for Barry is a good one.  Light and playful - a nice contrast to the more somber yet bombastic theme that follows Oliver around.

Two more references to the STAR Labs particle accelerator in Central City - another TV news broadcast and the cover of the Science Showcase magazine Barry uses to shield himself from the rain when we first see him.

The magazine itself is a fast reference to The Flash, as Barry Allen first appeared in Showcase #4 and was created as a means of teaching real science facts to comic readers in the 1950s.

Barry always running late is a running gag from the comics.

Barry's background here - becoming obsessed with crime scene analysis after his mother was murdered by a mysterious killer with super-speed and his father was framed for the crime - is consistent with his background as presented in The Flash: Rebirth.

Barry's straightening the rack of dangerous chemicals in the Queen Consolidated lab during a storm is a reference to how Barry Allen originally gained his super-speed powers in the comics.  Originally he was struck by lightning and thrown through a rack of chemicals.

The tenseness between Moira and Isabel Rochev may be a hint that Isabel was the woman Robert Queen cheated on Moira with.  This would fit with the character of Isabel Rochev from the Green Arrow comics by J.T. Krul, who had an affair with Oliver's father, thought herself in love with him and then became obsessed with taking everything associated with his name as her own.

As in the comics, Barry is an even worse liar than Ollie.

At this point in the show, Barry is only a lab assistant - not a fully-fledged CSI officer.

This is the second episode this season to not feature Laurel in any capacity.

Barry notes it takes 1250 foot-pounds of torque to crush a person's neck.  As noted, this is impossible for a normal person to do one-handed.

Centrifuges are used to separate the component parts of something by accelerating it at high speeds in a circle.  They are commonly used in blood tests.

Barry notes that The Arrow uses carbon-shafts for his arrows and that a aluminum-carbon composite would offer better penetration.

Ketamine is the sedative Brother Blood is using to create his soldiers.  Felicity notes that it's a common surgical anesthetic derived from hydrochloric salt.

Felicity figures out that, based on the way one of Ollie's arrows is bent, that the muscle density of the thief is at least 120 pounds per cubic feet.  That is almost the same density of common concrete.

Felicity: You look fabulous!  Really!  Better than ever!  Did you do something to your hair?
Moira: Yes.  I shampooed it without eight women and a guard watching.

(After finding out the vehicle used by their burglar was just used to rob a blood bank)
Diggle: Super strength?  Likes blood?  Please don't tell me we're starting to believe in vampires.

(After Ollie exposes the truth about who Barry is and dismisses him)
Ollie: He did lie about who he really was.
Felicity: Then what do we do every day?

(Upon examining the nearly empty party)
Moira: I guess these days I only draw a crowd is when I'm on trial for murder.
Thea: Mom, you don't have to -
Moira: We have guests.  However few of them there are.
(She puts on a smile and enters the room)

(In the alley behind the Verdant club)
The Arrow: What?
Roy: I need your help. A friend of mine's friend... Well, the cops think he ODed but we think he was murdered.
The Arrow: Why?
Roy: Well, he wasn't an addict for starters and this (holds up photo of Max) This doesn't look like any OD I've ever seen.
The Arrow: Stay away from that.
Roy: You know something?
(The Arrow says nothing)
Roy: What happened to him?  You're the one who told me to be your eyes and ears on the street and you know what?  That is NOT good enough anymore!
The Arrow: Fine.  Then we're done altogether.
(The Arrow turns around to leave)
Roy: I don't need you!
(The Arrow stops dead)
Roy: I have friends that can help me.  You can't stop us.
The Arrow: (whispered)  I can slow you down.
(Ollie turns around and shoots Roy in the lower leg)

(Merlyn enters Moira's room)
Moira: And I thought it couldn't hurt to add extra security guards.
Merlyn: It hurt them. (throws their guns to the floor) Badly.  Have you prepared Thea?
Moira: No.  You will not go near Thea.  You will not speak to her.  And you will never set foot in this house again.
Merlyn: I set you free, Moira!  Your life belongs to me.
Moira: I am through being afraid of you.
Merlyn: (laughs) You think you can stop me?  Even The Vigilante couldn't kill me.
Moira: No, he couldn't.  But I know someone who can.  Ra's Al Ghul.
Merlyn: How do you know that name?
Moira: Well, I didn't.  Until you mentioned Nanda Parbat.  The League of Assassins - however twisted their aims - believes very deeply in a code of honor.  Your Undertaking betrayed that code.
Merlyn: You told Ra's I'm still alive?!
Moira: He was so grateful to hear it.  Because he so very much wants to kill you himself.  So my advice to you, Malcolm?  Run.

Officer Lance quips, when asking what might have been stolen from the Queen Consolidated lab, if they had a spare earthquake machine lying around.

Shado finds out about Oliver's relationship with Sara.

Sin is seen for the first time since 204.

Thea does an about-face on Roy playing vigilante and indeed goes along for the ride this time.

Ollie opens up to Diggle and Felicity about his experiences on the island during his second year, telling them about Mirakuru and how it enhances the strength, reflexes and endurance of those who took it and survived.

Ollie says that Ivo is dead and that everyone who took the serum on the island is dead, the last of whom he burned personally.  He says he has fought people on the Mirakuru formula and won before.

Ollie notes the Mirakuru formula requires three components to be created - a centrifuge, blood and a strong sedative.

Roy notes that Max disappeared the same day as a blood drive.  He, Sin and Thea are spotted and followed by Officer Daily - Brother Blood's minion in the police department we've seen in the previous few episodes.

Later, Daily seems to recognize Roy and Sin as they are poking around the scene where Max's body was found.

Oliver injects Slade with Mirakuru, despite not having a sedative ready.  This causes Slade to bleed from the eyes and apparently kills him.

Moira has the means to contact Ra's Al Ghul.

By the episode's end, Ollie has been injected with Blood's Mirakuru formula and Barry has been told that Oliver Queen is The Arrow.

A solid introduction to Barry Allen as a character and a solid episode of Arrow on its own.  The flashback sequences and present-day scenes merge together incredibly well, building off one another.  Despite learning more of Ollie's past on the island in this episode than we have ever learned in previous episodes, there are still many mysteries yet to come.  A welcome return to form after last week.
Posted by Starman at 8:03 PM