I'll be honest, me hearties.  Your Captain did think better of continuing with this series.  Not out of any compassion for you, of course, but because there is precious little in this second chapter of The Blackbeard Legacy worth making fun of.

It would be fair to say that nothing that advances the plot happens in this issue.  In point of fact, nothing happens in this issue at all!  Now, a bad comic I can make fun of easily.  But a boring comic?  Aye, that's a challenge that makes even my stout heart tremble a bit.

And yet I shall persevere and try to weather this challenge!  Because even if I can't deliver my best, you still deserve for me to try!  Besides, I  haven't gotten any new comics this week and I've got nothing else to blog about right now.  So if ye haven't already been exposed to Part One of The BlackBeard Legacy, click this link before continuing.on past the next image. 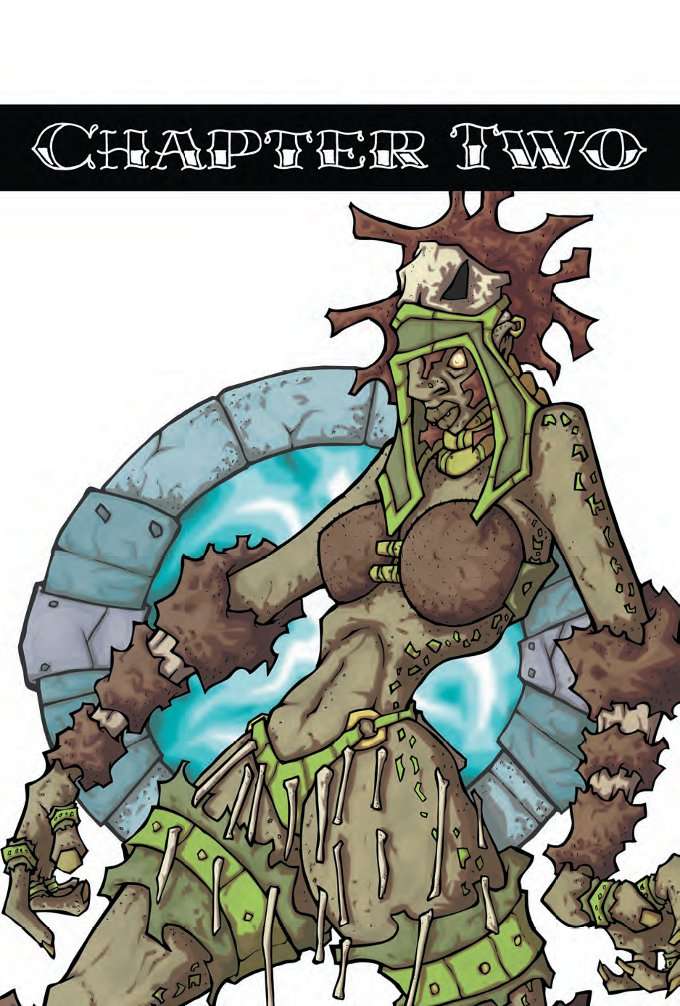 Our story begins with a wizened woman wearing tattered clothes and a skirt made of bones, standing on a beach.  This is the same woman we see on the Chapter Title page, though - unlike on the title page above - her skin is not green.  This, apparently, is Obehmana.  Our narrator, Hannah Teach, tells us that Obehmana is a witch/bounty hunter who - although Hannah didn't know it at the time - had been hired to track her down. We see Obehmana raise some zombies and it's quite spooky and terrifying.  Shame that's the last we'll see of them until the end of the issue.  Suddenly, we cut to Hannah waking up in bed, screaming.  Apparently she's been having reoccurring dreams of zombies coming for her.  Or some other reoccurring nightmare.  The narration is less than clear about this. What is clear is that the log-book Hannah stole mentions a key of some kind.  The key is apparently some kind of "Beautiful Circle" and is located in Cuba.  Hannah admits to herself this seems unlikely but the man who compiled the log isn't given to tall tales, so it must be the truth. After a brief scene in which Madison (the blind bounty hunter from last issue) voices her objections to going to Cuba and Hannah blows her off, we arrive in Cuba.  At this point we discover just how low the writers of this series will go in a cheap attempt to maintain reader interest as they indulge in the lowest form of humor possible - blatant parroting. That joke's not dead yet! It's getting better!

I don't know what's worse - the fact that they've been reduced to copying Monty Python skits wholesale for a cheap laugh or the fact that they misquoted the very thing they're ripping off!  As any teenage boy of a certain intellectual bend could tell you, the Norwegian Blue has "beautiful plumage" - not "lovely plumage".

The next four pages see Hannah and her crew questioning every damned person in the town about a mysterious key.  Apparently nobody in the crew bothered to put ranks in Gather Information because all they get is confusion, propositions and lines that I'm sure are references to the random townsfolk dialogue from various classic NES role-playing games or old TV shows. Eventually, Hanna makes her way to a tinker's shack that most of the locals seem to avoid.  Even Hannah, who is no shrinking violet, seems a little disturbed by the contraption that the tinker seems to be working on.  She asks about the key, claiming her book says they have it.  The tinker denies this and sends Hannah packing. So... wait a minute.  If Hannah's log book told her exactly who she had to talk to about the key, why did she send her crew off asking random people in the street if they knew about a key?  Was Hannah just trying to keep her crew busy and distracted from the fact that there's no treasure waiting at the end of their journey?

That seems likely and Hannah does admit to lying to them in the narration, when she says she's sure the tinker does have the key and that they should come back later and make a show of force to get it.  The irony being that the tinker DOES have the key and he's half-ready to give it to Hannah rather than worry about it since it's never done him any good. Our issue ends with some random drunk woman running into Obehmana and her zombies.  Remember them?  The bad guys who were set up as a big menace at the start of this comic?  Yeah, well the story ends before we get to see the poor unfortunate become zombie chow.  Or be turned into a zombie herself.  Or indeed anything interesting or exciting happen.

This comic sucks!  There's no action at all.  Nothing really happens except our hero fails to find a key.  It's never explained why she needs the key in the first place.  A villain is introduced but doesn't do anything.  And the only real continuation of the plot  from the first issue is the revelation on the penultimate page that Hannah's whole reason for wanting to track down Blackbeard is because of his part in her mother's death.  We're half way through this series and we're just now finding out our hero's motivation!

Next time won't be as dull but it will make you angry for entirely different reasons.
Posted by Starman at 12:05 AM