Fear And Loathing Of Love And Marriage In Superhero Comics 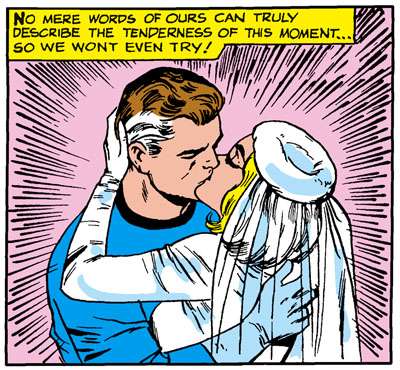 Who said that comic fans don't want to see people getting married?

What prompted this question is today's news that J.H. Williams III and W. Haden Blackman are leaving Batwoman as of Issue #26, citing editorial interference in their plans to have Kathy Kane and Maggie Sawyer get married.  Williams was quick to note that DC Comics' objection was to marriage in general - not a marriage between two lesbians.  The evidence does bear him out, given that nearly every major married couple in DC Comics pantheon of superheroes has either been broken up since the New 52 revamp or not appeared at all.

Clark Kent and Lois Lane?  Not an item.  Barry Allen and Iris West?  Flirting but he has a new girlfriend.  Wally West and Linda Park?  Don't even exist!  Ditto Ralph and Sue Dibny.  Heck, the only married couple I think is still around is Aquaman and Mera and they've interacted so little in his book you'd hardly know they were married!

Of course DC Comics is far from alone in being guilty of this sort of thing.  Do the words One More Day ring a bell?  Does everyone remember how that whole mess started because Joe Quesada thought the reason Spider-Man's sales were dropping were because the fans couldn't relate to a happily married Peter Parker?  Do anyone but me and the guys writing Spider-Fan.org remember that they tried killing Mary Jane off because of that theory and all it did was upset the fans?

"But Starman," I hear you metaphorical masses say.  "Superheroes get married and divorced all the time!  It's a common element in drama in many genres!"

That is true, dear masses.  Yet there is a world of difference between simple drama preventing marriage from occurring and a refusal to consider a plot element completely.

It seems that the very idea of marriage itself is under attack in our comics due to some mistaken belief that young readers do not want to read about married couples.  This seems odd given the belief some publishers have that their key demographic is 45-year old males, but that's a whole other argument.  So we still have the question - where did this idea come from?