Want to read the latest big crossovers but lack the patience to sort through tons of tie-ins or the time to read them all?  Let us sum it up for you with our Abridged Versions. 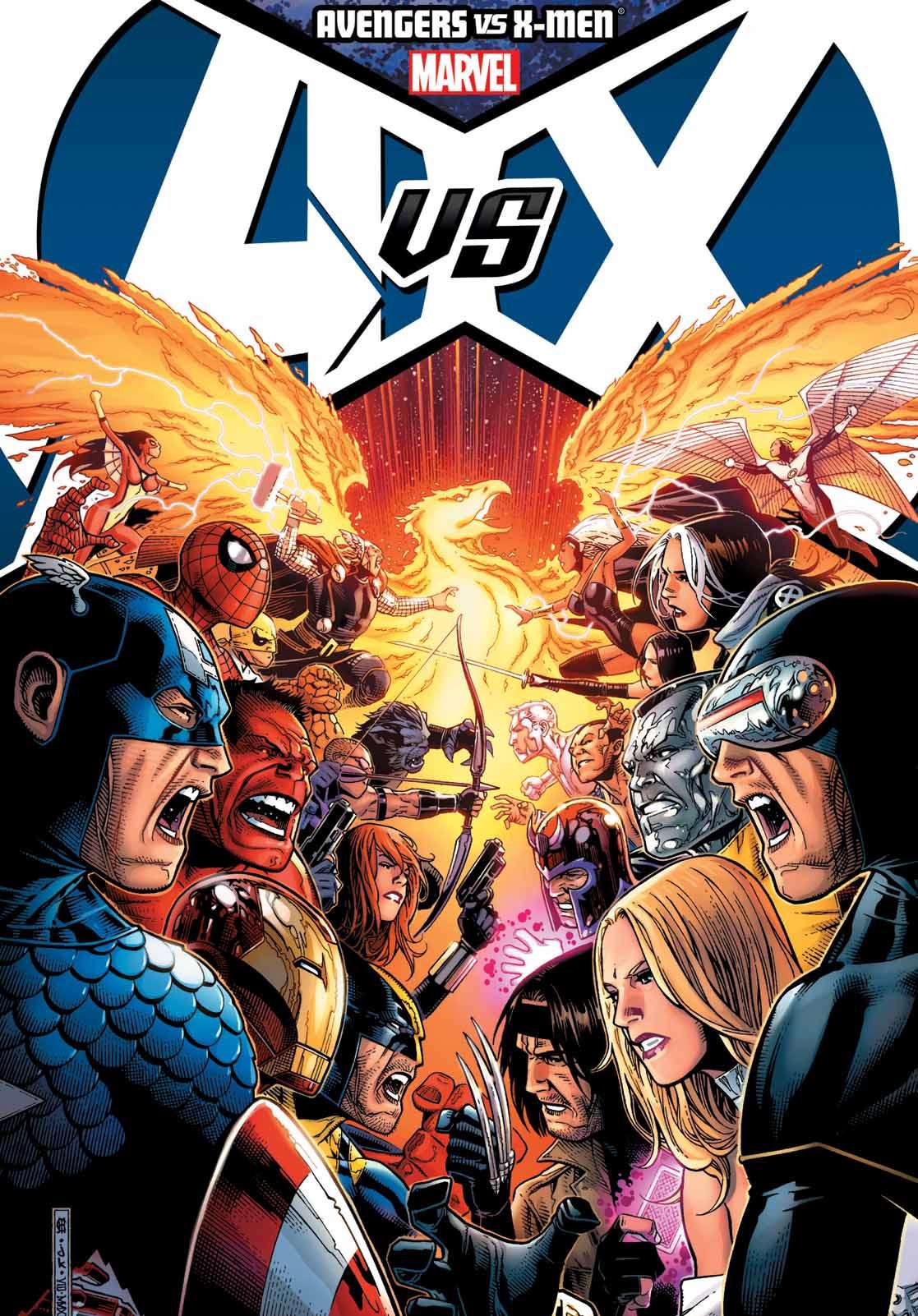 SCENE: Utopia - The Island Home of The X-Men, Off The Coast Of San Francisco.


Professor X: Scott, what are you doing?

Cyclops: Building a better world, like you taught me to.  As we speak, Peter and his sister are solving world hunger.  Namor is arranging for fresh water to be distributed around the world.  Emma is working on building perpetual energy generators for the most impoverished nations in the world.  And since we started talking, I've calculated a permanent cure for male pattern baldness.

Professor X: Really?  A permanent cure?   Well, that is - what am I saying?  Scott, you can't just give these things to people.

Cyclops: I'm pretty sure I can.  What you mean is that I shouldn't.

Professor X: Yes!  This is all meaningless unless people suffer for it!

Cyclops: Right.  Because being hated for what we are, hunted like animals, locked in concentration camps, recruited as slave labor, forced to live in the sewers, kicked out of our homes, abandoned by our family and friends... to say nothing of all the friends and family we've lost to anti-Mutant violence....NONE of us have suffered nearly enough.

Professor X: When did you get so sanctimonious?

Cyclops: I had a good teacher.

Iron Fist: So we were cornered by these electric alien things.  I thought we were goners.  Then Colossus showed up.

Captain America: Ah.  And no doubt he said something evil and killed them all.

Iron Fist: Actually, he just talked to them.

Captain America: He talked to them... saying evil things before killing them?

Iron Fist: No, he just... listened to their concerns, talked to them and they agreed to become a power source for all of Eastern Europe.

Iron Fist: Sorry, Cap.  But I think they're legit on this whole saving the world instead of destroying it thing.

Captain America: Right.  Eggheads, what have you got for me?

Beast: Right now?  Jack and Squat.  And I believe Logan drunk most of the Jack.

Iron Man: Well.. I think I figured out what Pym did wrong.  But so far I can only figure out how to further split the Phoenix Force down until every mutant on Earth is hosting it.

Black Panther: Do we really have a problem?  They are doing much to help the world become a better place.

Wolverine: We could have just avoided all this if you'd let me kill the girl earlier.

Captain America: What's wrong, Hank?  You refuse to work toward killing or hurting your friends?

Beast: That and the fact that - and I can't believe I'm saying this - you've become more insufferably pig-headed than Cyclops!

Monk In Costume: I saw a giant fire bird in the sky.

Old Monk With Eyes In Hand: Ah yes.  Ancient scroll tells of this.  Iron Fist ineeded to fight The Phoenix. And that is our entire scene this issue..


CUT TO: The White House

The President:  So what you're telling me is that The Phoenix Five appeared before the United Nations and declared themselves the world police?

Black Panther: That's not entirely accurate.  I remember it like it was a flashback... 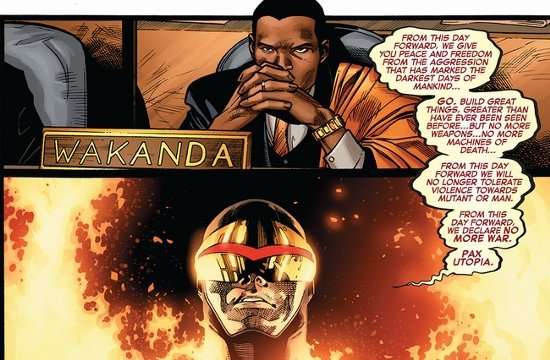 The President: So... basically, they'll prevent our enemies from committing acts of violence against anyone so long as we swear off violence ourselves and devote ourselves toward doing good and making the world a better place?

Captain America: That's what I said!

The President: Gentlemen, you have my permission to do whatever it takes to stop The Phoenix Five from ending our way of life.

CUT TO: An Avengers Jet Flying Over Utopia

Captain America: Right.  So is everyone clear on this plan?

Hawkeye: Do the same thing we tried last time we stormed Utopia, what with the kidnapping a teenage girl from the only home she's ever truly known.  Only this time we try it with less people, less resources and pull it off under the nose of five all-knowing cosmic beings who hate our guts?

Captain America:... sure, it sounds stupid when YOU say it.

The Avengers parachute jump out of a moving plane onto Utopia.  They break down a wall and begin beating up mutant teenagers trying to get to Hope. 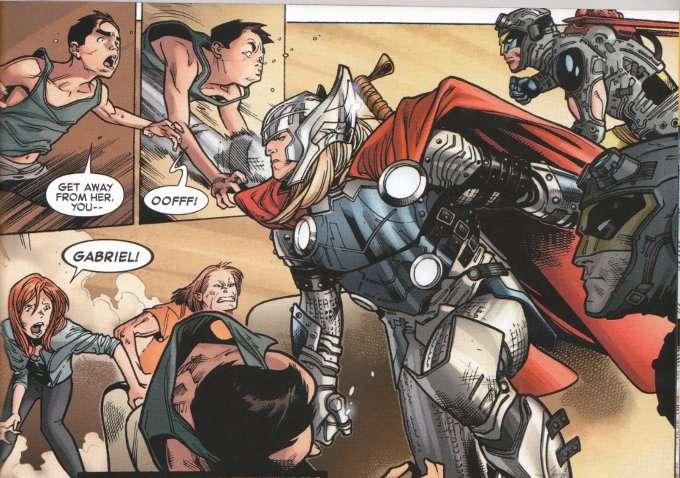 Things go well for The Avengers until The Phoenix Five show up and neutralize them all easily.

Cyclops: Oh, for the love of... do you have any idea how bad this looks?  Seriously?  We're building a better world and you're beating up children and trying to kidnap Hope against her will.

Hope: Actually, I kinda want to go with them.

Cyclops: No, you don't.  Honestly, I'm surprised Captain.  I didn't think you'd be stupid enough to try storming our home a second time.

Cyclops: Huh.  That figures.  Well, Fun is fun but I can't let this slide.  The only thing that can save you now is an improbable Deus Ex Machina. All: THE SCARLETT WITCH!

Scarlet Witch: Yes.  I've had a vision that this would happen and that it will end badly.  For the sake of everyone, I am taking The Avengers home.  And Hope is coming with me.

Scarlet Witch: That was not a request!

She blasts Cyclops.  He actually feels it.

White Queen: Chaos, Scott... I sense nothing but Chaos Energy around her....

Scarlet Witch: Eh, depends on whoever is writing me at the time.

Cyclops: Okay then.  We'll play it your way.

In the time between issues, The Phoenix Five have captured the Avengers Tower and put The Avengers on the defensive.  Cyclops tells everyone about this, because why would we want to see such a daring action sequence in a comic book?  Also, Cyclops describes their other more recent victories, even  though the whole team should know this as a) they were there and b) they're basically omniscient.

Cyclops: Remember - capturing Scarlet Witch is priority one, but neutralize any Avengers you can!

Captain America: It's them!  Attack!  Try and push them towards Wanda.

Vision: Words not found in vocabulary to describe how distasteful I find her presence.

Scarlet Witch: I'm not happy to be here either, you know.

Iron Man: Focus, Wanda.  I need you to focus on feeding me data on the Phoenix Energy.

Scarlet Witch: Focus, Tony?  You want me balancing your data AND providing cover fire for our team?  Whose idea was it to have Vision here anyway?  And don't say Hank Pym.

Vision gets blasted by X-Men.  This distracts Scarlet Witch, which messes up Tony's readings.  Wanda freezes up and the only thing that saves her is Hawkeye knocking her out of the way before being set on fire before The Avengers get teleported away.  Just a reminder - Scarlet Witch was responsible for Hawkeye dying and he still risked his life to save her because Hawkeye is awesome.  He's also the only Avenger who does anything heroic in this story so far.  Luckily, the fire only leaves him mostly dead, so The Phoenix Five can heal him before putting him in their brig.

Namor: We should start killing them.

Cyclops: No.  Killing is not our way.  We're supposed to be showing them a better path.  Do you think Captain America is looking for a victory at any cost?

Captain America: We need victories and we need them yesterday.  Tell me what you've got boys.  I want victory at any cost!

Iron Man: Well.. I'm working on another Phoenix Buster armor.  But I need more time and more data to make sure it will work.

Captain America: You've got nothing.

Black Panther: Tony, I can't help but notice that this isn't so much an armored suit as it is a mobile suicide bomb.

Iron Man: Yeah, well I'm responsible for The Phoenix Five coming into being.  Figure if someone should die stopping it...

Black Panther: You don't get to kill yourself just because you can't find an answer using super science.  My own abilities come from a combination of mysticism and advanced technology.  I believe a solution to dealing with The Phoenix can be found by exploring the boundary between both.  We must find a solution in the spiritual plane.

Iron Man: Shyeah, right!  And I suppose a magic portal will just open up with a solution to our problems?


A Magic Portal Opens.  Out steps Iron Fist And The Monk In Costume from earlier step out.


Iron Fist: Hey guys!  This is Lei Kung, The Thunderer of K'un Lun - the mystical city of Kung Fu where I -

Iron Man: - have discovered a solution to all our problems?

Iron Man: Not a word, T'challa!

Hope and Wolverine get ready to take Hope to K'un Lun so she can learn how to use The Iron Fist to fight The Phoenix.  Meanwhile, Tony discovers some kind of connection between The Scarlet Witch's chaos energy (which she has in this issue) and the Phoenix Force.  Everyone else keeps fighting everyone else until Namor attacks Wakanda with a giant tidal wave and the Atlantean army.

Iron Man: Okay.  Logan, Hope and I will go to the mystical city of Kung Fu.  Cap, use the secret weapon when it's time.  Good luck, guys!


All hell breaks loose in Wakanda as the streets flood and Atlantean soldiers begin killing random civilians as Namor rants about being unappreciated.

Black Panther: I will kill Namor for this.

Captain America: I know Namor.  I'll get him to stop.

Black Panther: Oh, NOW you want to try talking to them?

Captain America: Don't you see what he has done here, Panther?

Black Panther: I see Namor destroying a lot of my native land.

Captain America: Not him!  Cyclops!  Scott Summers has revealed himself.  This is an act of war against innocent people!  This proves us right!

Black Panther: Well, fantastic!  I'm sure that will prove a great comfort to my people..  I shall have the royal dancers create a special "Cap Is Right" dance and hold a parade in the streets of Wakanda for you.  Assuming I still have royal dancers or streets once Namor is done destroying my kingdom!


(PARODIST'S NOTE - Sadly, I'm not altering the dialogue in this scene all that much.)

The Avengers show up and start trying to beat up Namor.  At no point do we see any of them trying to limit civilian casualties or actually save people.


CUT TO: Utopia - The Island Home of The X-Men, Off The Coast Of San Francisco.


Magneto: I have a riddle for you, Scott - what rules an undersea kingdom, has the power of a god, a bad attitude and is currently decimating Wakunda?

White Queen: You should have seen this coming, dear.  He is his own man and he does what he wants.

Cyclops: Yes, but all those people... all those deaths.

White Queen:  True.  On the other hand, now we know where all The Avengers we haven't captured yet are.

The Avengers finally knock Namor out... just as the rest of the Phoenix Five show up.  Thankfully, there's a sudden burst of energy that envelopes them all.


Spider-Man: What's going on?  And when did I get here?

Captain America:  No time to gawk, folks!  This had better work, Tony...


Suddenly, The Avengers all disappear.


Colossus: Do you feel that too?

White Queen: All Namor's power has come to us...

Cyclops: Stop what?  The destruction of Wakanda?  Not my idea!  And everything I've done to The Avengers came after they broke into our home and beat our children!

Professor X (telepathically): Stop now or I will stop you.