My friend Jeremy Williams wrote this recently and generously gave me permission to share this with the wide world. As a Starman fan, I love it. I think you all will too. 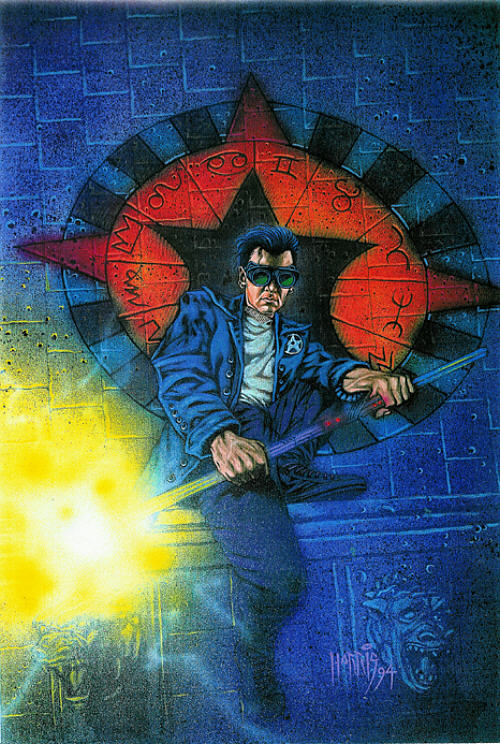 Do you know what it’s like
To be expected since birth
To carry on a dangerous legacy?
Are you imagining the migraine level stress,
The strain on your own identity,
And the explosion of glory IF you succeed?
Well trust me,
It’s just as insane and all encompassing
As you think it is and more.
I’m Jack Knight,
Most of the world called me Starman.

It is a name that recalls old days
When my father wore a suit
That made him look like Superman
Decked out as a Christmas Tree.
The job took its toll;
My father’s sanity,
My brother’s lifeblood,
And it took everything I had
Destroying my job,
Hurting my lovers,
And sending me to space on a quest
To find another to carry
The name I fought under.
I’m still not sure how much say I had
In living the life I took on.

Don’t get me wrong,
I loved every second of it.
Every time I get punched by a villain,
Every time I blasted monsters with
The cosmic energy of my staff,
Every time I got to fly...
I was gifted with the most amazing
View of my beloved Opal City,
The belle of the big cities,
Where shadows are filled with
French quarter influences,
The city who’s police force is
Envied for their honesty and diligence.
Opal City who has yielded me friends
From others who the world fears.
This city hosted the change of a zombie
From destroyer of heroes into a friend.
This city who hosts shadows that hold horrors
Which want to protect the children,
This City that shines bright as a star,
The star in the darkness that my family
Always was to her, our people.
This City that is filled with so much Hope
That you can taste it in the coffee.

I have saved the people and city,
Traveled in time and fought throughout space,
Helped liberate a planet,
And even told Jor-El how to get to Earth.
Yet to this day I count my greatest victory
As making the great and powerful Batman himself
Admit that he had a favorite Woody Allen movie.
I swear to God he even smiled as he named it!

I have been the hero my city needed,
Till I knew I wasn’t needed anymore.
My power lives on,
In a girl I trained beside,
Knowing that she would be more inspiring
As a Stargirl than I ever was as Starman.
But don't ever tell her I said that.

I am currently sitting at a cafe in San Fran,
The woman of my dreams across from me.
I sip some coffee that makes me long for home,
Wondering about how Shade and the O’Dares
Are doing working together for peace.
I am living proof that heroes can retire,
Find a happily ever after that doesn’t end
In the next life past a tombstone.
We don’t have to go down fighting.

I’d be lying if I said I didn’t miss it.
The rush of the wind,
The flow of cosmic energy along my limbs,
The life and death thrill was always amazing...
But a normal life is filled with just as many
Adventures, risks, and more to love.
Some heroes can go back to normal life,
And I am glad to be one of them.

But don’t think I don’t have some Cosmic tech
Squirreled away in a pen, a belt, or a cane.
You know, just in case.
After all, even San Fran might need a hero some day.
Posted by Starman at 4:18 AM