The Ocean At The End Of The Lane - A Review 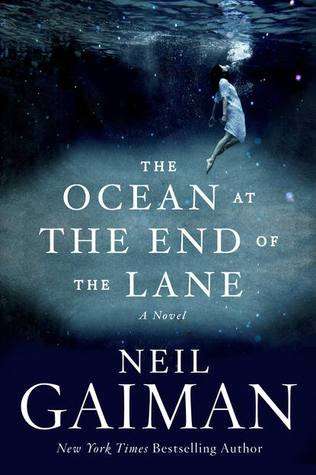 It would be all too easy for me to say that The Ocean At The End Of The Lane is a good book and that people who have enjoyed Neil Gaiman's writing in the past will enjoy this book as well.  It would be true but it wouldn't actually tell you anything about the book.  Nothing useful, anyway.  Not what the sort of people who read book reviews would call useful.
Thinking on it, that's the laziest sort of writing for a critic to indulge in, isn't it?  A "For those who like this sort of thing, this is the sort of thing they would like" sort of thing?  And yet I struggle to think of a better way of describing this book without using phrases like "This novel is built around a typical Gaiman conceit".  As if anything involving Neil Gaiman could ever be "typical"!

While I'd never sully this book with a word like "typical", it would be fair to say that we've seen Gaiman use some of these props before.  Yet like the improvisational artists who turn unlikely objects into other unlikely objects as part of a skit, Gaiman plays with his toys in entirely different ways this time around.  There is a trio of women, for instance, who will draw inevitable comparisons to The Maiden, The Mother and The Crone of Sandman but are most definitely NOT witches or The Fates.  Precisely what they are is open to interpretation, as is much of this novel.  There's also a character who may well be the closest we ever get to seeing The Doctor from Doctor Who as an eleven-year-old girl with reddish-brown hair.  Still not a proper ginger, yet.  Sorry Doc.

Likewise, the basic plot - largely told in flashback - seems reminiscent of Coraline at first, in that it deals with the magic of childhood.  And by "the magic of childhood", I mean the sinking sensation in the back of your head at all times up until you discover boys and/or girls that adults know a lot of things you don't and yet there are monsters in the world that only you can see hiding in the shadows and that they're just waiting for the right moment to eat your body, your soul or worse.  There's always an "or worse".  You know that too when you're a child.
There's also several cats.  Cats are nice.  Unlike Coraline, none of the cats talk in this book.  At least, not to the people.  Not with words, anyway.  Not with telepathy either, but I wouldn't put it past Gaiman to include a telepathic cat in some story in the future.
You can have that one for free, Neil.  I don't mind.
In the end, there is little I can say about this book that wouldn't give away the whole game except for a few short sentences.  It's a modern fantasy.  It's about the magic of childhood, by which I mean horrible things happening to children that should never happen to children, as viewed through the lens of maturity.  There's cats, a clever girl, a well-meaning boy who prefers books to people, a wide variety of monsters and a threat to the whole universe and maybe even something bigger!

In short, it's the sort of story that you'll enjoy if you're the sort of person who enjoys Neil Gaiman stories. And I did enjoy it.  Perhaps that is all that needs be said.
Posted by Starman at 3:32 PM

Email ThisBlogThis!Share to TwitterShare to FacebookShare to Pinterest
Labels: Neil Gaiman, novel, The Ocean At The End Of The Lane