I've been looking forward to The Movement #1 and dreading it in equal measure.  I've been looking forward to it because Gail Simone is one of my favorite writers and the idea of a superhero team focused on dealing with the problems of the common man ala Dennis O'Neil's revamp of Green Arrow offers a level of relevance and reality that has been lacking in most of DC Comics' output since the New 52 revamp started.  And I've been dreading this title since it was announced that Freddie Williams II (whose work on Captain Atom and Green Arrow I didn't enjoy) would be the series' artist. 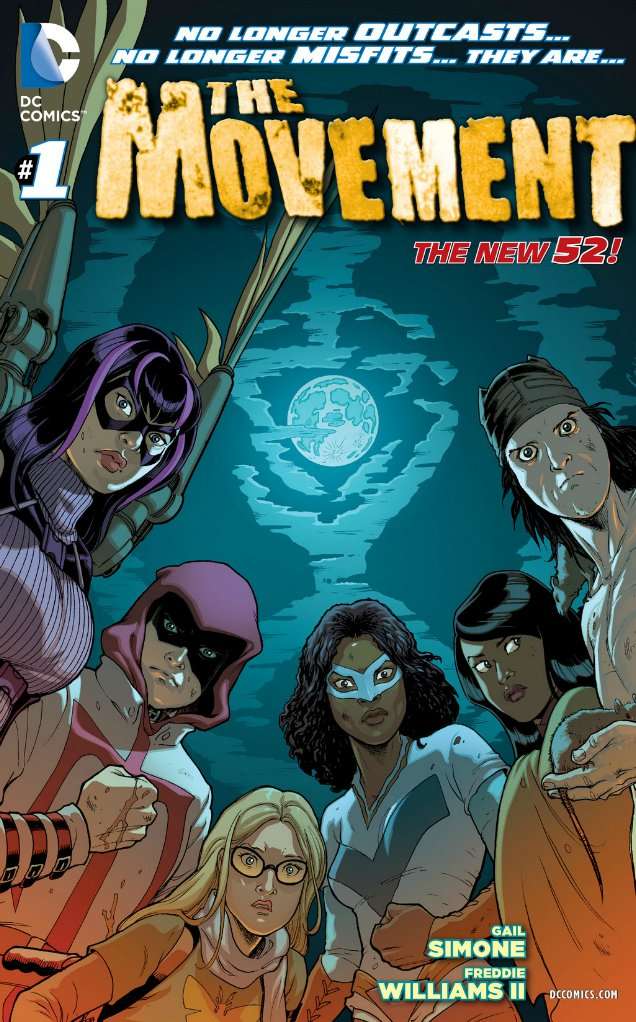 For the most part, this first issue is a by-the-book superhero team introduction story, with our cast being given a chance to show off their powers and reveal their code names.  There's a mix of old and new Gail Simone creations, with this Earth's version of Tremor from Secret Six being part of The Movement as well as Katharsis, who we saw opposing Barbara Gordon in the current Batgirl book.  We're also introduced to the Pied-Piper like Mouse (a self-dubbed King of Rats) and the empathic Virtue.

The main plot of the issue centers upon Captain Meers - seemingly one of the few honest cops in Coral City.  At the very least, he's the only person in the department who seems at all concerned about letting two dirty cops who were caught on film attempting to force sexual favors from a minor continue working in the field.  Unfortunately, thanks to the power of bureaucracy - and the fact that the offending footage came from the Anonymous-style hacktivist group Channel M - there's nothing he can do. With a serial killer targeting the town's homeless, Meers has enough on his plate without having to worry about his own men breaking the law.  The rumors of metahumans now working alongside "the Channel M brats" aren't helping him maintain his calm either.  And when a seemingly demonically possessed teenager begins raising a ruckus at a local church, Meers blows his calm completely even before he and his men first encounter members of The Movement. 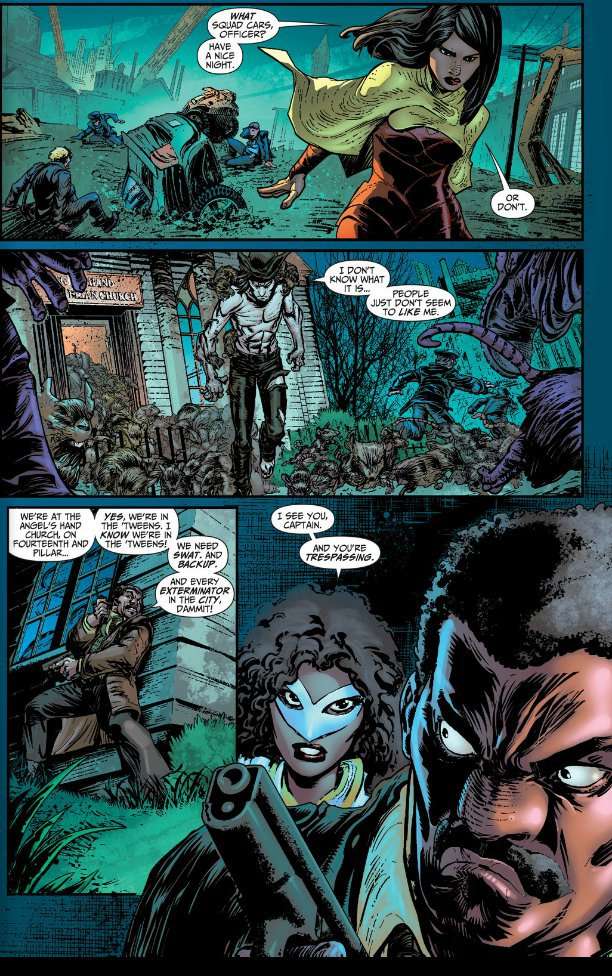 Any fears that outspokenly liberal Simone would run riot and turn this book into one gigantic "stick it to the man" rant prove wholly unfounded.  Public Workers Unions - that favored bogeyman of fiscal conservatives everywhere - are portrayed as unfavorably as the bent cops who are preying on young girls.  More to the point, The Movement isn't portrayed as an entirely sympathetic or heroic organization.  While they do go after the corrupt cops we see in the issue's opening scene, they also wait and force a confrontation with a large number of police officers who - as far as we know - aren't guilty of any crimes.  The two dirty cops are seemingly beaten to death, rather than being delivered any legal punishment.  Virtue also doesn't help matters by using knowledge gleaned from using her powers to antagonize Captain Meers, who might have been sympathetic to The Movement's cause up until that point. I can't say that I disliked Freddie Williams II's work this time around.  I can say, however, that I don't think his particular style suits the story that Simone is trying to tell.  Williams' artwork is highly stylized, being cartoonish and over-exaggerated.  While Simone can go over-the-top (as anyone who enjoyed Secret Six can attest), the story so far doesn't seem to suggest that level of wacky fun amid the darkness.  Even if it does develop into that kind of series in later issues, I think Amanda Conner (who did the cover for this issue) would prove a better fit for the material.  Granted, that may be because I've been dying to see a long-term Simone/Conner team-up for a while but the point still stands.

Regardless, The Movement #1 is a thought-provoking premiere issue and well worth purchasing.  We don't have much of a read on the titular team yet but Simone's script gives us enough of a taste to want to see how things develop.  And while I'm still not a fan of Freddie Williams II's style, I can say that his artwork in this issue is the best I've ever seen.
Posted by Starman at 8:29 AM