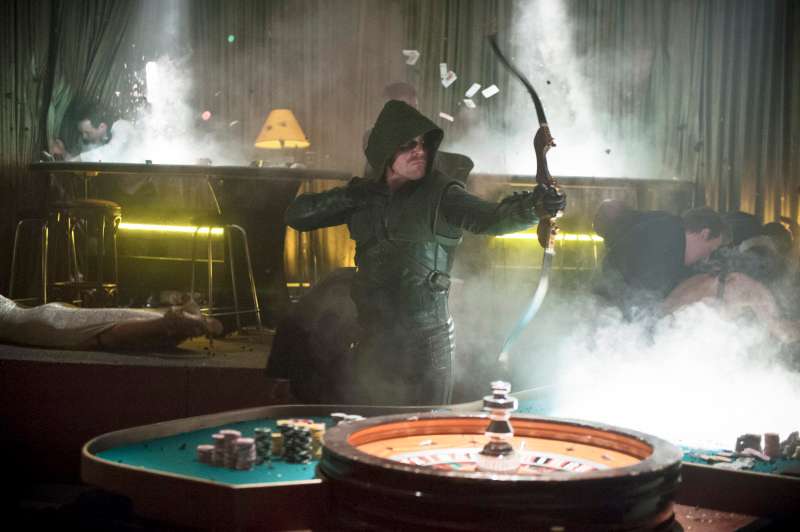 After The Hood's raid on a corrupt accountant's office yields a money trail that seems to point to Walter's kidnappers, Oliver is ready to drop everything else in his life to rescue his step-father.  Felicity is also eager to help but sending her into the city's most infamous underground casino in search of the kidnapper is not Ollie's idea of a good plan.  Still, with John Diggle having quit the vigilante business, Oliver is low on help and on options.

Meanwhile, Laurel is determined to get to the truth of why Tommy dumped her.  She turns to Oliver for support and assistance in approaching Tommy.  Little does she know that Ollie has his own troubles with talking to Tommy about anything - let alone Laurel!

In a flashback to five years earlier, we see how Malcolm Merlyn came to organize "The Undertaking" and precisely what it entails - nothing less than the complete destruction of The Glades through an artificially generated earthquake!  We see both Robert and Moira Queen's reaction to this mad plan, as the two begin to work against their old friend.  We also get a look at the Laurel Lance and Oliver Queen of five years ago and just how their relationship began to fall apart before Ollie's departure on The Queen's Gambit with Laurel's sister.

Superman: The Movie (artificially created earthquake used to cover a land grab), Batman: No Man's Land (Malcolm Merlyn's plan resembles one of the villain's plan to take advantage of an earthquake to seize control of an entire city and rebuild it in his image), Casablanca (Ollie quotes the film when he sees Laurel in his bar but also the theme of a man lying to the woman he loves for a greater cause) and Green Arrow: City Walls (a rich man uses his fortune to try and save his city through rather extreme measures).

While Walter Steele does have some rather extensive beard growth to show how long he's been held captive, his captors were apparently kind enough to keep his head freshly shaved.

After several episodes, it finally happened.  I finally liked  the way they wrote Felicity Smoak and Emily Bett Rickard's performance as her.  I think it's because this is the first episode to fully show her having some vestige of a personality and a life outside of being Oliver Queen's miracle geek girl.  For the first time, Felicity's helpfulness seemed to be born of a natural kindness and desire to help people rather than a means of pushing the plot along.  It may also have helped that the show hung a lampshade on the fact that Felicity is completely unknown to most of the cast despite being neck-deep in the action of this episode.  Oliver says it all at the end of the episode.  "She's my friend."  Not a plot device.  Not the chick who helps me fix my computers.  A friend.  And Walter agrees with him!   And the writing, for once, treats her like just that.

I could write paragraphs about the awesomeness that is John Barrowman, but since I'd like to get to sleep sometime the evening I write this report, let me just say this.  Barrowman is a fine actor and a chameleon who fades into his parts.  When he talks about his dead wife and listening to her crying for help to his answering machine over and over because he was too busy to take her call when she'd been attacked, you forget he's an actor playing a role.  He's that good.

Katie Cassidy doesn't get much screen time this episode but she takes advantage of every moment she is there.  Some fans may worry about the idea of Laurel Lance - any version of the woman who may be Black Canary - seemingly obsessing over a man the way Laurel seems to obsess over Tommy dumping her.  Personally, I see no contradiction here.  I do not see a helpless girl who feels that she needs a man.  I see a strong woman who refuses to be lied to or to be pushed aside so easily  That is very much the spirit of the Dinah Laurel Lance I know and love.

All of the episode's fight-scenes are top-notch.  The battle between The Hood and nearly a dozen thugs in the hallway as he's trying to rescue Walter is particularly memorable.

The gadget Malcolm Merlyn intends to use to create an earthquake is called "The Markov Device".  This is a reference to the DC Universe's fictional country of Markovia as well as Tara Markov and Brion Markov.  Better known as Terra and Geo-Force respectively, the two siblings were part of the royal family or Markovia and both had superpowers that allowed them to control the earth around them including, but not limited to, generating earthquakes.

In the flashback, Moira refers to "just another Ted Kord fundraiser".  In DC Comics, Ted Kord was a brilliant inventor and industrialist who fought crime as The Blue Beetle.

In the flashback, Laurel refers to another couple - "Ray and Jean" and how Ray had just asked Jean to move in with him.  This is likely a reference to Ray Palmer and Jean Loring.  In the DC Universe, Ray was a scientist who gained the power to shrink while maintaining his mass and he fought crime as The Atom.  Jean was his long-time girlfriend before becoming his wife and then his ex-wife.  Ironically, they are perhaps the only romantic couple among the Silver Age Justice League members to have a more troubled relationship than Oliver Queen and Dinah Laurel Lance.

Oliver makes use of a bug-arrow to listen in on his mother and Malcolm Merlyn discussing Walter's being held hostage.

Ollie: Of all the gin joints, in all the towns, in all the world, she walks in to mine.
Laurel: (sipping from her cup) This coffee is terrible, Oliver.
Ollie: Well, that's what you get for ordering coffee in a bar.

Laurel: Did he say anything to you?
Ollie:  No, Tommy and I haven't talked very much since he quit.  But he'll come around.  It's probably just cold feet.
Laurel: Like it was with you?  Oliver... you don't sleep with your girlfriend's sister unless you're looking to break the relationship up.
Ollie: If you still want to be with Tommy, do what we should have done.  Talk to each other.  And be honest.

Felicity: I can count cards.  It's all probability theory and mathematics.  Have you met me?  Bottom line: I know my way around a casino.

Malcolm: It still feels like yesterday, that day.  When she called my cel phone for the first time, I remember being annoyed.  She knew I was busy, so I just let it ring.  When she called back a minute later, I shut my phone off.  A little after midnight, two SCPD officers showed up at my office.  All I remember them saying was she'd been shot.  Murdered.  In The Glades.  After the cops left I sat in my office the rest of the night, listening to Rebecca's messages.  She kept calling my name.  Asking for help.  Until she was just struggling to breathe... gasping for air!  I listened to my wife die.  Over.  And over.  And over again.
Robert Queen:  ... I can't imagine, Malcolm.
Malcolm: Try!  Imagine it was Moira lying on that pavement, bleeding, calling your name... and then tell me you wouldn't be prepared to do what I am!

Felicity:  Look, I know Oliver didn't help you find your brother's killer.  And that hurts.  It sucks.  But... you've got to know that if it was your life on the line and not your... VERY understandable vendetta, he would be there for you.  No hesitation.
Diggle: I don't want a partnership with those kind of qualifications, Felicity.
Felicity: I know.  Oliver's.... religiously... against admitting he's wrong.  He needs you.
Diggle:  Yeah.  And when Oliver is ready to say that, he knows where I live.

(While scoping out the casino while Ollie listens in on the radio)
Felicity: It feels really good having you inside me. (beat) And by you I mean your voice. (beat) And by me I mean my ear and I'm going to stop talking RIGHT now!
Ollie: That would be my preference.

Laurel: I talked to Tommy yesterday and the reason he broke up with me is because he thinks that you and I still belong together.
Ollie: What did you say?
Laurel: Nothing.  He walked out on me.
Ollie: I just want you to be happy.  (pause) That's what I've always wanted.
Laurel: Then will you please go talk to Tommy for me?
Ollie: And say what?
Laurel: Say that you and I are over!  That you're not still in love with me!
Ollie: I can't do that.
Laurel: Why not?!
Ollie:  Because it wouldn't be true.  And I have enough lies in my life already.

It's been six months since Walter was kidnapped and the events of Year's End, according to Moira Queen. Ollie apparently keeps the bar at Verdant open during the day.  They serve coffee but it's not very good.  Dominic Alonzo runs the biggest underground casino in Starling City.

In the flashback we see Walter Queen (first seen in Pilot) and Frank Chen (killed in Salvation).  Adam Hunt (killed in Year's End) is referred to in the meeting of the people behind The Undertaking and it is suggested he might help fund an upgrade to the police radio network in exchange for information on his embezzlement being ignored.  We find out that The Undertaking was started to blackmail the worst people in the city (i.e. everyone on The List) into doing things to help it.  It is Malcolm Merlyn who says it isn't enough and suggests investing in a firm to develop a device that will take five years to develop a prototype.  Moira blames herself for Robert Queen's death as she encouraged him to abandon The Undertaking after he told her that Malcolm Merlyn was planning to kill thousands.  Robert Queen accidentally killed a city councilman who demanded a bribe.  He joined The Undertaking as a means of making up for that crime.  Both Robert Queen and Frank Chen agree to work together to try and buy up parts of The Glades before Malcolm Merlyn can.  Ollie and Laurel are friends with another couple named Ray and Jean.  Oliver makes arrangements to sleep with Laurel's sister shortly after being pressured to move out of his parents house and find a place for them to live together.  Laurel gave Ollie her picture right before he left with his dad on The Queen's Gambit.  Frank Chen was the one who arranged to place the bomb on The Queen's Gambit.

We find out Walter Steele is being held hostage in Bludhaven.  Ollie travels there to rescue him.

An expository episode which avoids feeling like an information dump thanks to some stellar performances by the show's spectacular ensemble cast and a smooth, well-written script.  What little action there is looks amazing and the information we learn about several of the show's less established characters more than makes up for the slower pace.  This episode may be more concerned with setting up the season finale than telling its' own individual story but it manages both tasks with ease.
Posted by Starman at 12:11 AM