It's become something of a joke among Arrow fans that the Starling City Police Department doesn't have any other detectives in it besides Quentin Lance, his partner (whose name I don't recall ever being mentioned on the show) and - until recently - McKenna Hall.  Arrow #27 rectifies this somewhat by introducing us to Detective Rivera - no first name given.  Rivera is a Starling City native who grew up in The Glades and seems to hate The Hood nearly as much as Detective Lance.  This leads to him suggesting a new strategy for capturing the vigilante - going undercover with the gang that seems to be The Hood's current target.

This issue reminded me of the series Criminal (by Ed Brubaker & Sean Phillips) in several respects.  Emilio Aldrich's script focuses upon the realities of the shady side of Starling City, barely featuring The Starling City Vigilante until the very end of the issue!  The artwork by Eric Nguyen is gritty and uncompromising, reminiscent in several spots of Jock's work on Green Arrow: Year One. 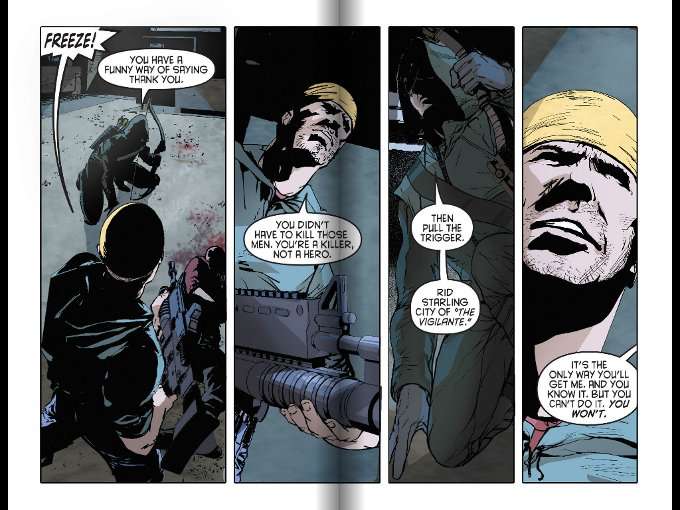 Your enjoyment of Arrow #27 may best be determined by your enjoyment of police procedural stories.  There's very little of our hero in this issue and none of the character-based drama one usually sees on the show.  Still, this issue is enjoyable for what it is - a good cop story - and well worth the $1.00 download.
Posted by Starman at 7:15 AM