Note To Self: The next time you teach a class at a convention, do not agree to a 9 AM start time the morning after you're up until 4 AM driving home from a late night performance. Good advice to anyone, I think.

My first class of the day - indeed, the first class of everyone's day on the second day of All-Con 2013 was Time Keeps On Slipping: The History of DC Comics.   Naturally speaking on such a complicated and difficult subject involving multiple time-lines, alternate universes and other wibbly-wobbly, timey-wimey matters required a good deal of inspiration.  And what better inspiration could there be than dressing up like The Doctor?

Of course I was far from the only Doctor Who in attendance.  Heck, I wasn't even the only Tom Baker Doctor present.  Of course having all these Doctors running around risks warping the space-time continuum.  If one isn't careful one can wind up with a Pair Of Docs. 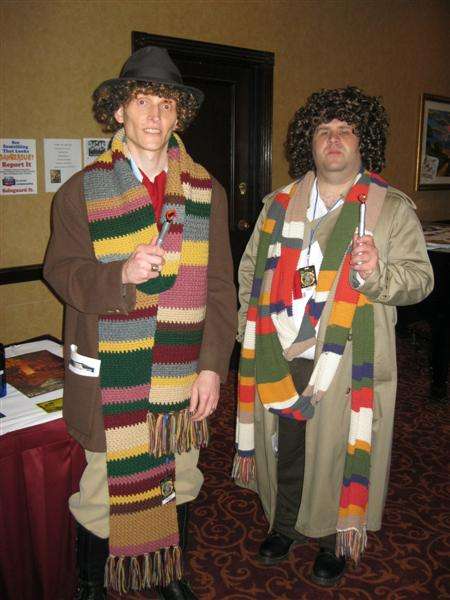 Doctors of all kinds abound at All-Con as The United States of Geekdom held a second showing of Doctor Horrible's Singalong Blog Saturday morning.  This time, the show was prefaced with an evil laugh contest, with the winner winning a small statue of the character of Penny.  I'd show you a picture of the proud winner but modesty forbids my putting my own picture in a report more than twice.

Besides, I'd much rather show you a picture of this amazing Dr. Horrible cosplayer and the equally amazing Penny cosplayer who was with him.  To my astonishment, she said I was the only person who realized she was supposed to be in costume.  I sympathize.  Many's the convention I cosplayed Jack Knight only for people to think I was just some random steampunk with goggles and a bomber jacket. 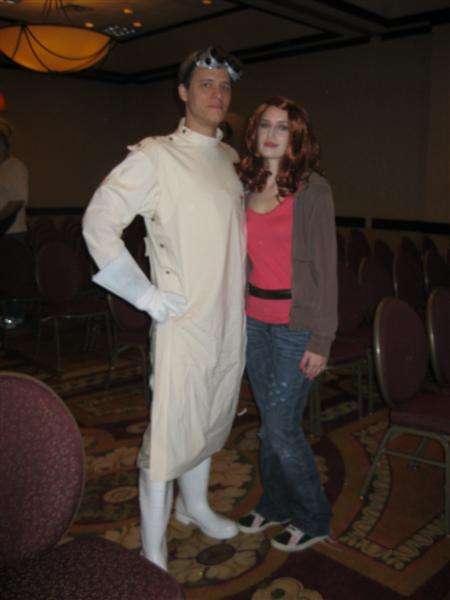 With that done and no solid plans until my next panel in the early evening, I opted to wander the floor and take a few cosplay pictures.  I swung past the ADD booth and snagged this picture of my friend Rikku, who was dressed as Yoko Littner from the anime Gurren Lagann.  This is an old costume for her but it's the first time I've ever snagged a pic of her in it. 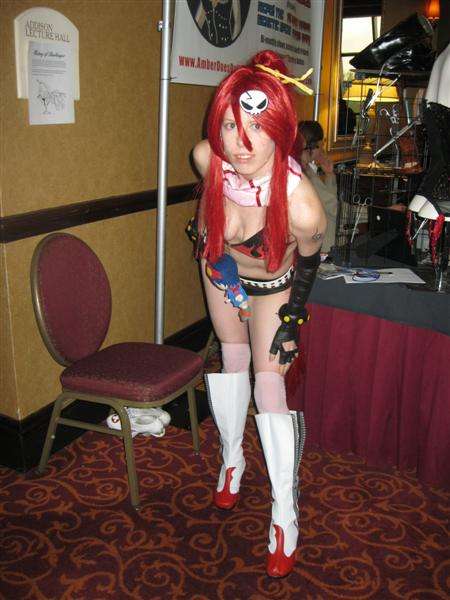 I think Browncoats may outnumber Whovians at DFW cons.  At least, it seems like I saw just as many characters from Firefly as I did Doctor Who characters on Saturday.  Take this pair - Jayne Cobb and the most cheerful Malcolm Reynolds I've ever seen. 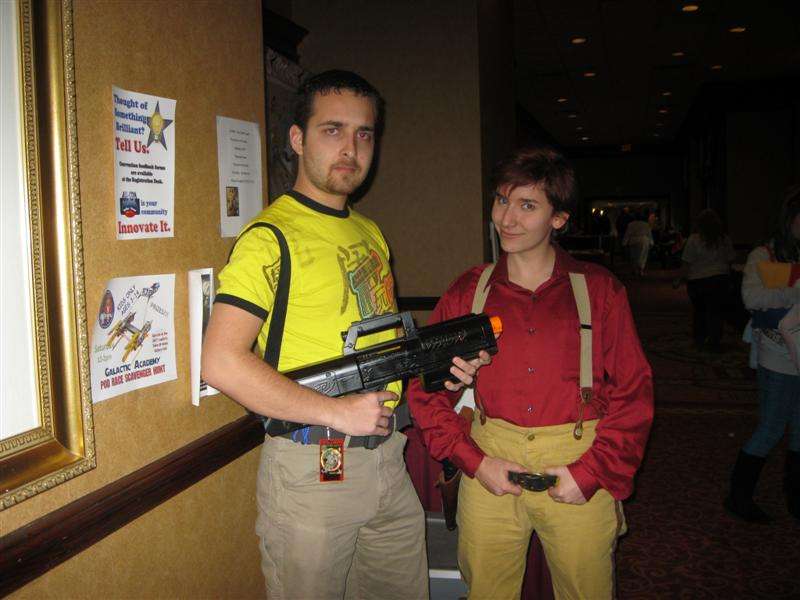 Here we have a Kaylee, in her pretty dress from the episode 'Shindig'. 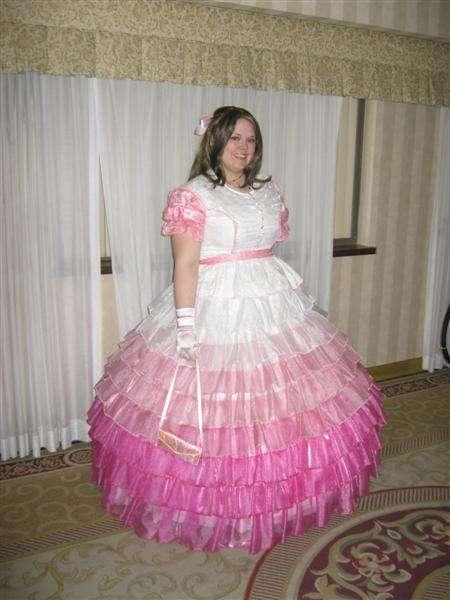 Mash-up costumes are a common theme at many conventions now.  Take two films or shows and combine them together to make something new.  This can get quite wacky at times and/or prove quite brilliant.  I think this example is brilliant - Jayne Cobb as a Ghostbuster!  Shockingly, his proton pack is not name Vera. 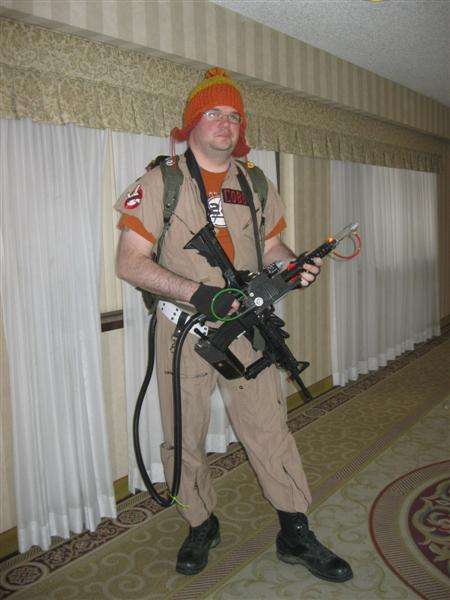 Of course you'll see the more mainstream science-fiction and fantasy represented at a big convention like this.  Jedi and Sith abound.  And then you get something truly intricate and impressive like this Queen Amidala from Star Wars: Episode One. 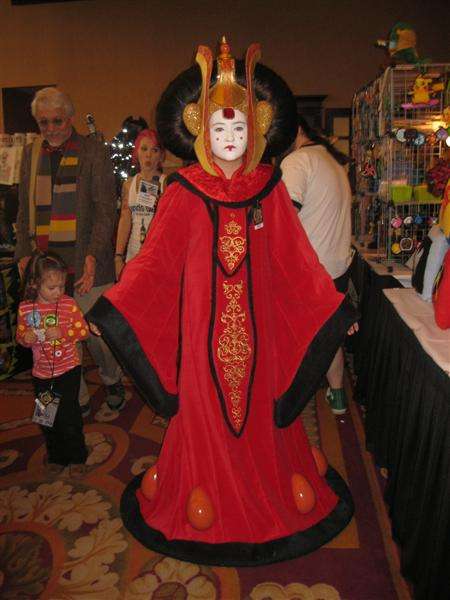 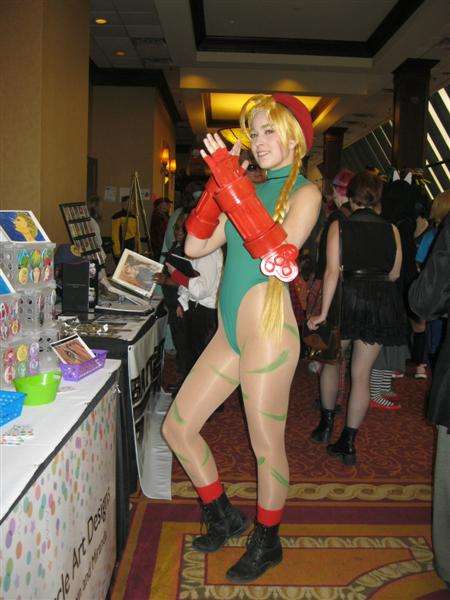 My favorite animated movie of the past year was Wreck-It Ralph.  So it did my heart good to see this trio, bringing Venelope, Ralph and Candlehead to life.

Meeting new people is part of the point of a convention, of course.  But meeting up with old friends is also quite fun.  Friends like my buddy Taffeta Darling, who spent Saturday playing the part of Seymour from Little Shop of Horrors when she wasn't hosting her own events. 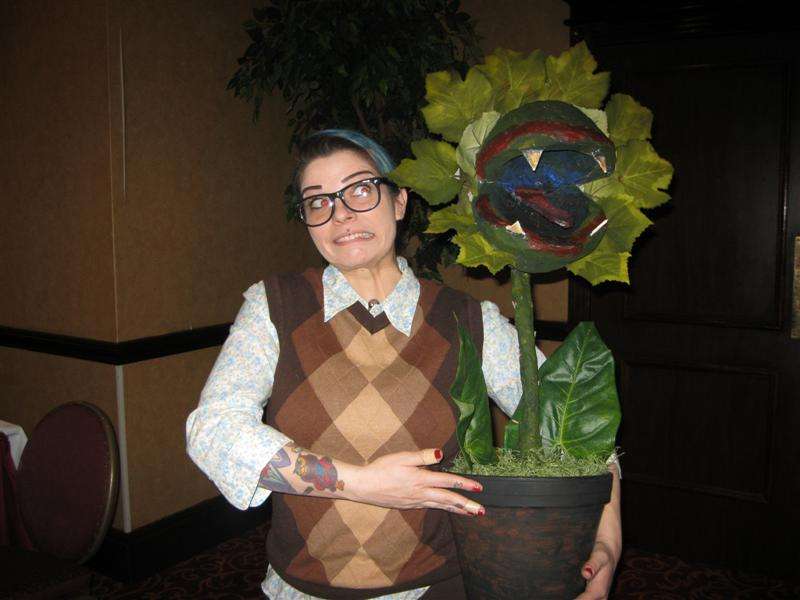 Also in attendance was frequent Taffeta Darling collaborator Lhars Ebersold.  You might recognize her as the Pris to Taffeta's Zhora from my Dallas Sci-Fi Expo photos.  This day, she was resplendent as the best damned Mystique I've ever seen.  And I've seen a few.  You can check out Lhars' artwork here. 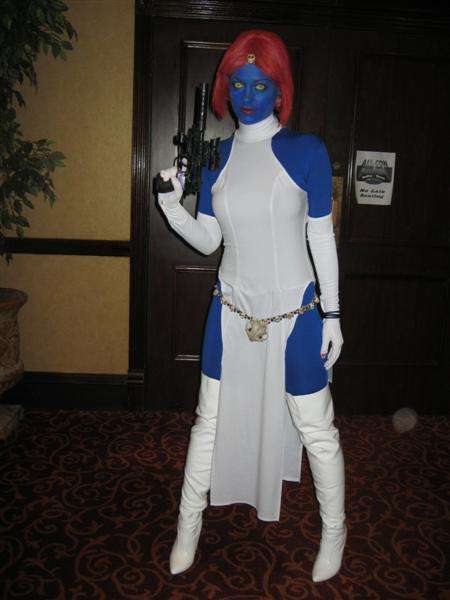 It was at this point that your reporter found himself in need of a nap and a meal and departed the convention proper to seek out both.  The morning was over but my day was just beginning...
Posted by Starman at 10:16 PM