Arrow #23 wasn't written or drawn by Mike Grell.  Despite this, it seems to possess some of the same spirit that inspired much of the late '80s/early '90s run of Green Arrow.  Subtitled Hunters, the story focuses upon Ollie's battle with a mountain lion after Ollie's attempts to stop a drug-deal in the wilderness lead him into the wild cat's territory. 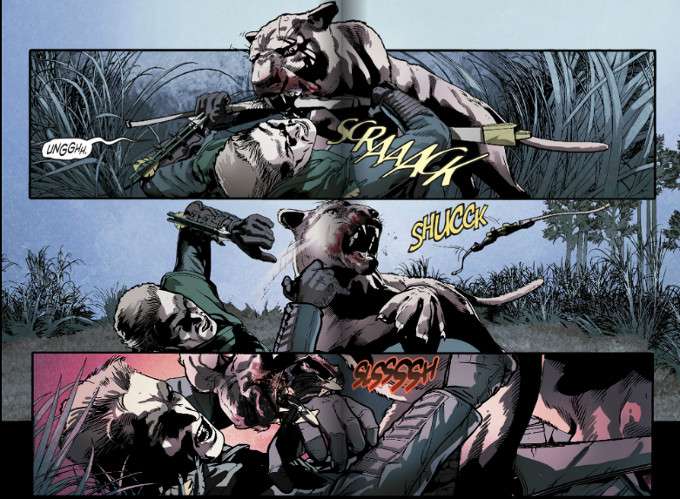 The script by Emilio Aldrich invokes the Men's Adventure magazines of yesteryear.  This is fitting considering Ollie's own origins among the pulp heroes of that time and the adventurers having to contest with dangerous men and even more dangerous animals.  The action is well-paced and Ollie's thoughts on survival, inter-cut with quotes from The Art of War further evokes the feeling of Mike Grell's warrior poet take on Green Arrow. 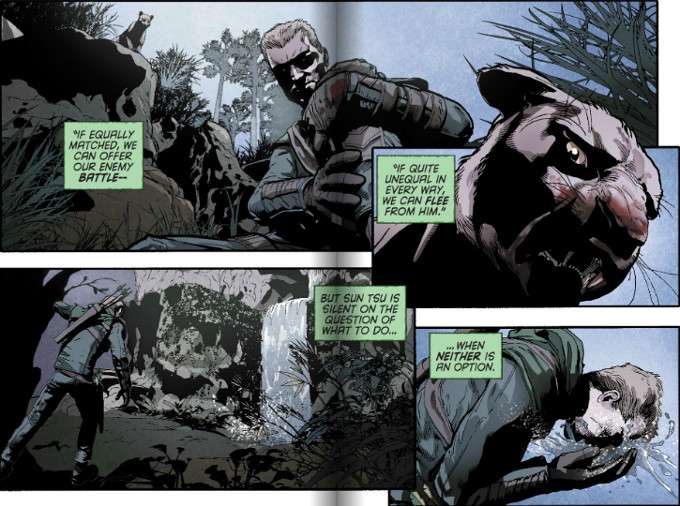 I've dismissed Omar Francia's art in the past as being too heavily inked.  While this may have been true of past stories set among the bright lights of Starling City, Francia's dark style is very fitting here in the forests of the night.  You really feel Ollie's terror in every panel, as he evades a predator who has him outclassed and outmaneuvered.

Bottom Line: This is a good issue of Arrow and a must-read for anyone who likes Mike Grell style Green Arrow stories, Jack London style tales of survival or any comic with dark, atmospheric artwork.
Posted by Starman at 2:23 PM