Star Trek: Khan - Ruling In Hell - A No Flying No Tights Review 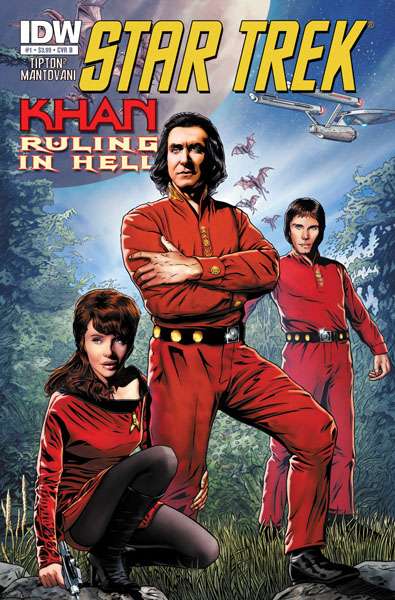 The character of Khan Noonien Singh (or simply Khan) has become famous even to those who are not familiar with Star Trek in specific or science fiction in general. Played by the charismatic Ricardo Montalban on both the small screen and silver screen, Khan proved to be far more than a simple villain-of-the-week. Indeed, despite his background as a genetically engineered super-soldier and attempted dictator, Khan was a surprisingly sympathetic figure. Though his means were cruel, he was a product of his creation and he struggled against his nature to be something greater, becoming a man of honor who honestly did wish to provide for his followers. Small wonder then that Captain James Kirk chose to give Khan and his followers the chance to colonize a hostile but habitable world rather than punish them for attempting to usurp his command.

Most of us know where the story went from there. How the planet Khan and his followers settled on was ravaged by natural disasters shortly after they began their colonization efforts. How neither Starfleet Command nor Captain Kirk himself ever checked-up on the colony to monitor their progress or see if they needed help. How Khan’s wife and many of his followers died in the decades that followed, leaving Khan bitter, disillusioned, and desperate for revenge.

Khan — Ruling In Hell tells the story of the time between where Star Trek: The Original Series left off and where the film Star Trek II: The Wrath of Khan began. Unsurprisingly, given the popularity of the character, this is not the first time this tale has been told. Author Greg Cox wrote a Star Trek novel detailing the same period of time – the similarly named To Reign in Hell. This book, however, is an entirely original work and the first time Khan’s exile has been detailed in a graphic novel format.

One might rightly think it difficult, if not impossible, to tell a gripping, action-packed story where one already knows the ultimate ending. However, writers Scott Tiption and David Tipton meet this challenge handily, largely focusing the story not upon the disasters but on the people. Much of the plot details Khan dealing with treacherous underlings who lack his faith that Captain Kirk will treat them fairly. Khan’s romance with Lt. Marla McGivers – the Starfleet historian who aided him in his attempted coup of the S.S. Enterprise – also offers readers an interesting subplot, showcasing Khan’s nature as a man, not a leader or warrior.

The artwork by Fabio Mantovani proves impressive. Mantovani perfectly caricatures the actors from the original Star Trek show and does a good job of slowly and subtly aging them as the story progresses. The use of color and shadow is particularly impressive, with some fine detail blending the colors in such a way as to make the light of fires seem to glow upon the page!

IDW did not offer an official rating for this book. I would personally rate it as being fit for most teenage audiences. There’s a fair bit of violence but no blood is shown and there’s no outright nudity, though Lt. McGivers does trade her Starfleet uniform for a skin-tight bodysuit that leaves little to the imagination.