There's a problem - let's call it The Archer's Complaint, since it comes up just as much with Hawkeye as it does with Green Arrow.

THE ARCHER'S COMPLAINT: What good is a guy who is really good at using a bow in a world where magic is real, aliens exist and super-powered beings are an established fact of reality?

There's two ways a writer can cope with The Archer's Complaint.  The first method limits the character's activities to dealing with low-level street crime and real-world problems.  This tactic was used by Mike Grell on Green Arrow and is currently used by Matt Fraction on Hawkeye.  The second method showcases the character's mental skills and gives them technology that allows them to level the playing field.  This method was used by Joss Whedon in the Avengers movie and pretty much everyone who wrote Batman in the last two decades.

I mention this because writer Kevin Dooley did not choose either of these paths when he was writing Green Arrow.  Whether it was because he was honestly unable to think of stories where Oliver Queen could be an effective hero or he actively hated the character I have no idea.  Either way, I can't help but notice that the stories Dooley wrote for Cross Roads were the ones where Ollie proved completely ineffective until he changed his methods and standards, whether it was by destroying private property, abandoning finesse for raw power or outright killing an unarmed man that the law wouldn't touch.

With that in mind, let's play some Comic Book Limbo and see how low we can go with Green Arrow #88. 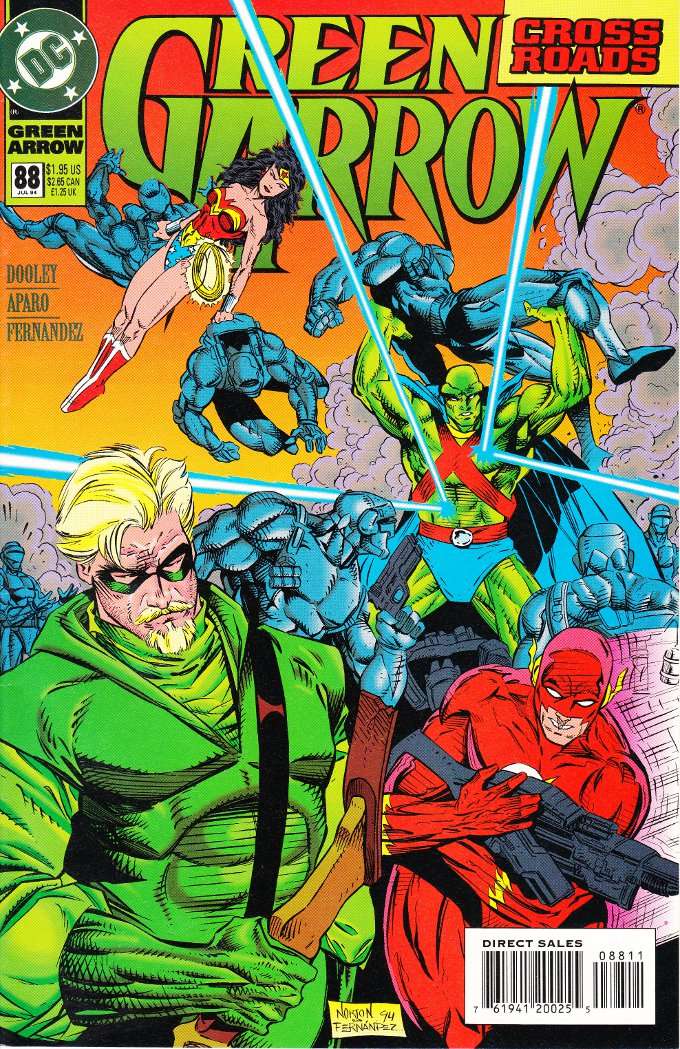 Hey, Wally?  Could you run down to Academy and get me a bow that isn't broken?


This cover is a complete lie.  There's no armored soldiers anywhere in the book.  Ollie isn't in costume once in the whole issue.  His bow never gets broken.  The Flash never shows up.  And - SPOILER ALERT - Ollie never fights alongside his former colleagues in the Justice League. 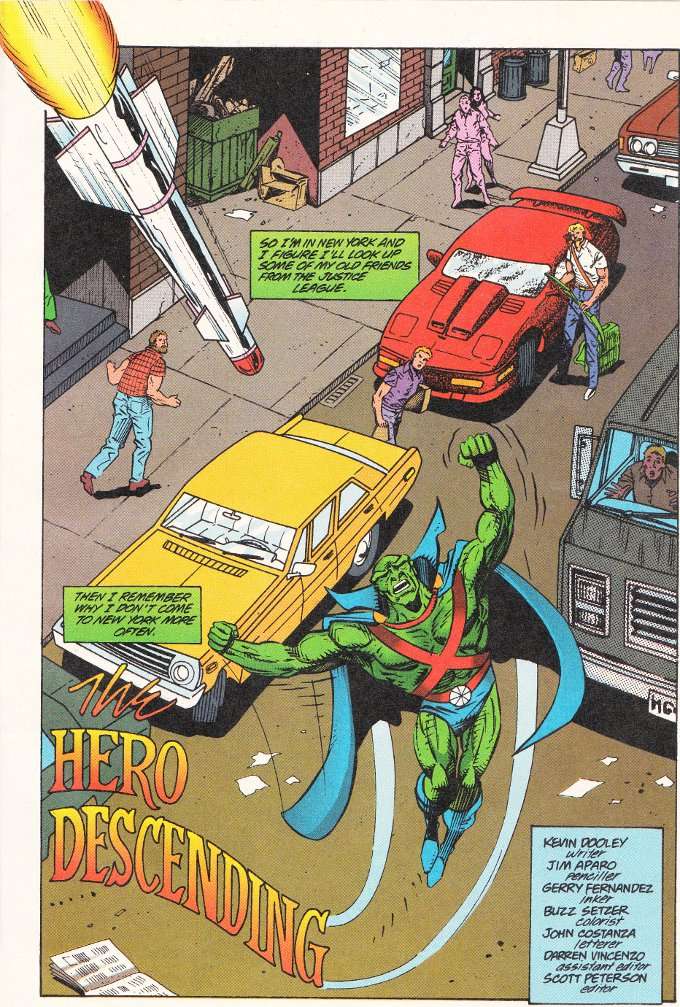 For one thing, you can't get theater tickets without taking out a loan these days...

As Ollie watches J'onn effortlessly catch the missile, deflecting it towards a second missile, he thinks back on his days in the Justice League and wonders if they might still have a place for the World's Finest archer.  He dismisses the thought just as quickly, thinking there's nothing a man with a bow can do against a madman in a jet armed with heat-seeking missiles and starts wondering if the other heroes just humored him.

Get used to this self-loathing, folks.  We're going to be seeing a lot more of it.

Ollie leaps into action after J'onn punches his way through one of the jet's engines and the plane starts to fall downward.  This leads Ollie to try and shoot the cockpit glass with an arrow.  Wait... Why?  What was he hoping to accomplish?  Kill the pilot in case he was trying to steer the plane to where he could hit someone when he crashed? 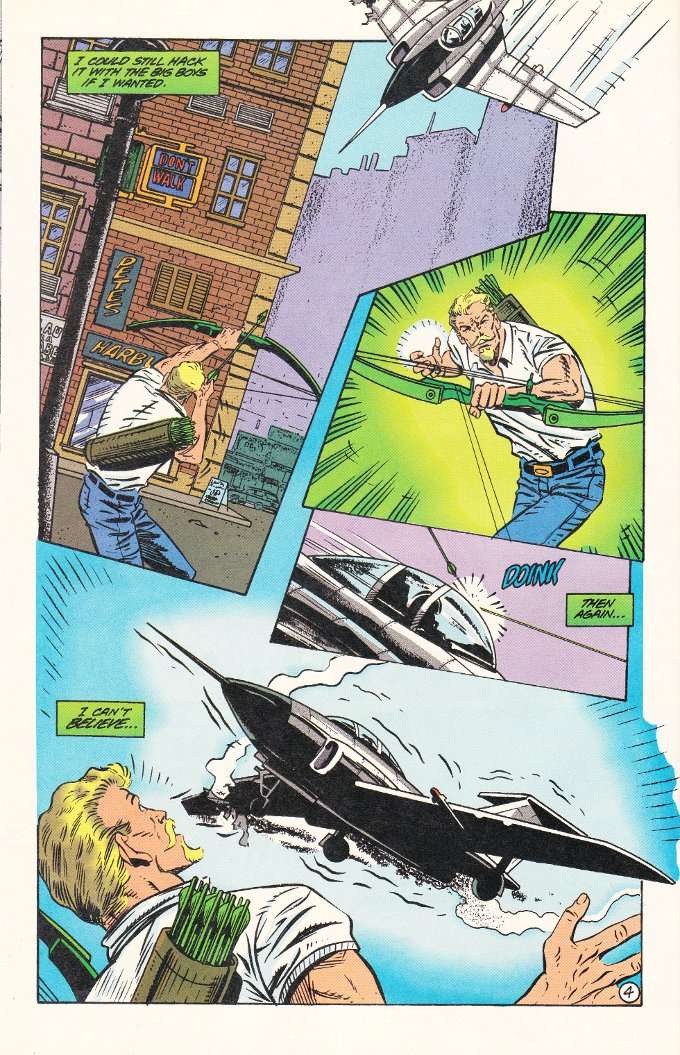 No, Ollie's arrow didn't do anything.  It's Martian Manhunter again, righting the plane and bringing it down safely.  The police come up to take the pilot into custody as Ollie looks on.  This would be an ideal time for Ollie to step in, say hi to his buddy J'onn and offer to go commiserate over some cookies and milk at one of Manhattan's many fine diners.  Ollie doesn't do that.  Even though the whole reason he came to NYC was to get in touch with his old friends. 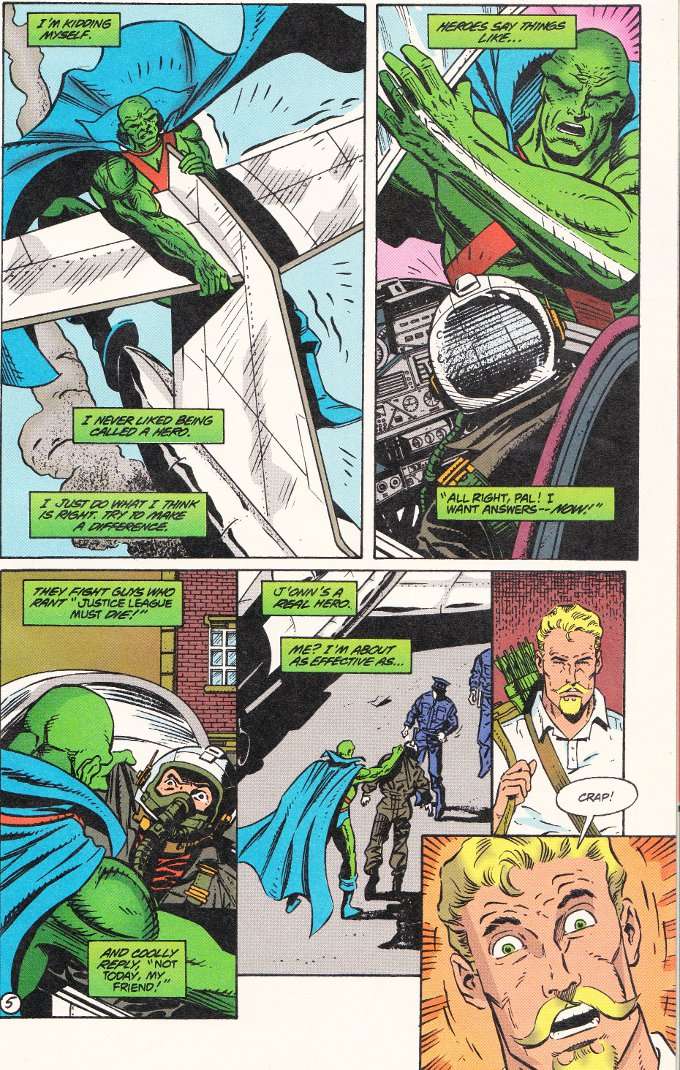 No, Ollie isn't trash-talking himself, for once.  In the minute or so while his back was turned, Ollie's car was stolen.  A surprisingly clean-cut and well-dressed homeless man tells Ollie about how the whole neighborhood has been going to hell in a hand-basket and how the cops are more interested in harassing the homeless then catching criminals.  I'll give Kevin Dooley credit for this much - that is totally accurate in regards to how Mayor Rudolph Giuliani ordered the police to handle the homeless in New York City at that time. 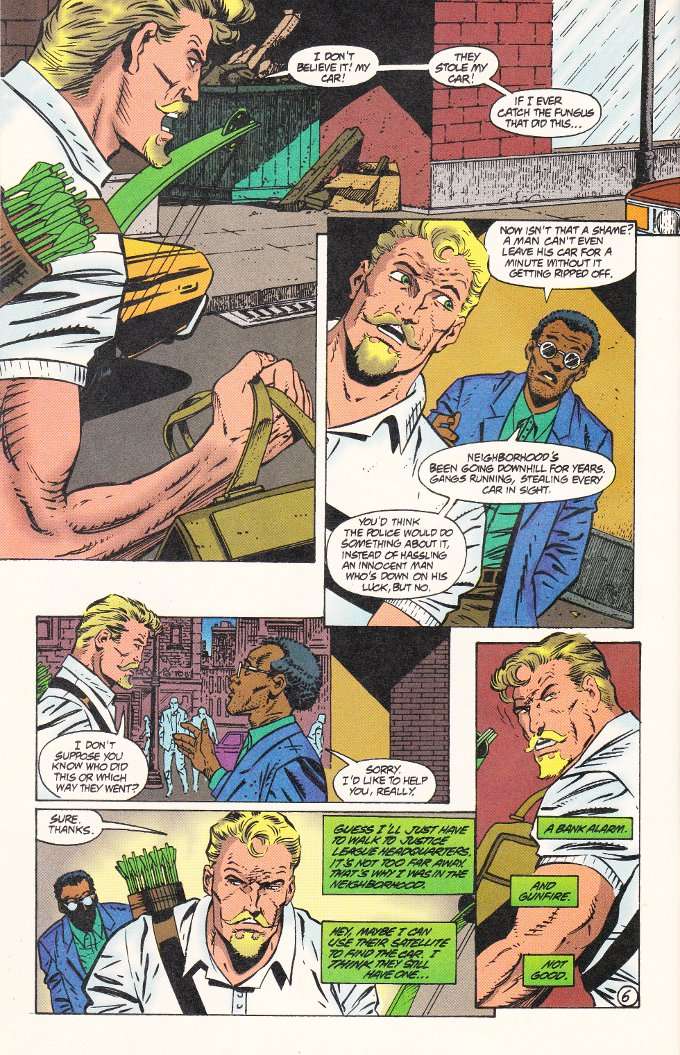 Okay.  Let's pause to consider something.  We're only six pages into this book and we've already had an apparent terrorist attack with a stolen jet, a car theft and now a bank robbery.  All of this has happened within walking distance of the Justice League Embassy.  All of this happening on the same street with the span of about five minutes.  Unlikely?  To put it mildly.

I'll grant you the jet attack since it may have been aimed at the Justice League Embassy itself.  I'll even grant you the car-theft may have been a crime of opportunity, since everyone was distracted by the sudden jet landing.  But I don't think it likely that the neighborhood around a public superhero base would be the kind of place a car thief would routinely hang around waiting to get lucky OR that someone would try to rob a bank near one.  There's a reason the crime rate tends to be lower around police stations and the same principle should apply here.

Anyway, Ollie runs toward the sounds of gunfire and finds several police officers pinned down by heavy fire.  As Ollie tries to figure out how he can stand up to a bunch of robbers with high-powered guns, Wonder Woman shows up.  Ollie thinks she has things well in hand and he doesn't have to get involved... until he sees two men with guns sneaking up on Wonder Woman, ready to shoot her in the back at point-blank range.  Ollie is about to shoot at the men, but Diana has matters well in hand again.  This time, Ollie does try to say hello, but the uniform cops are having none of it. 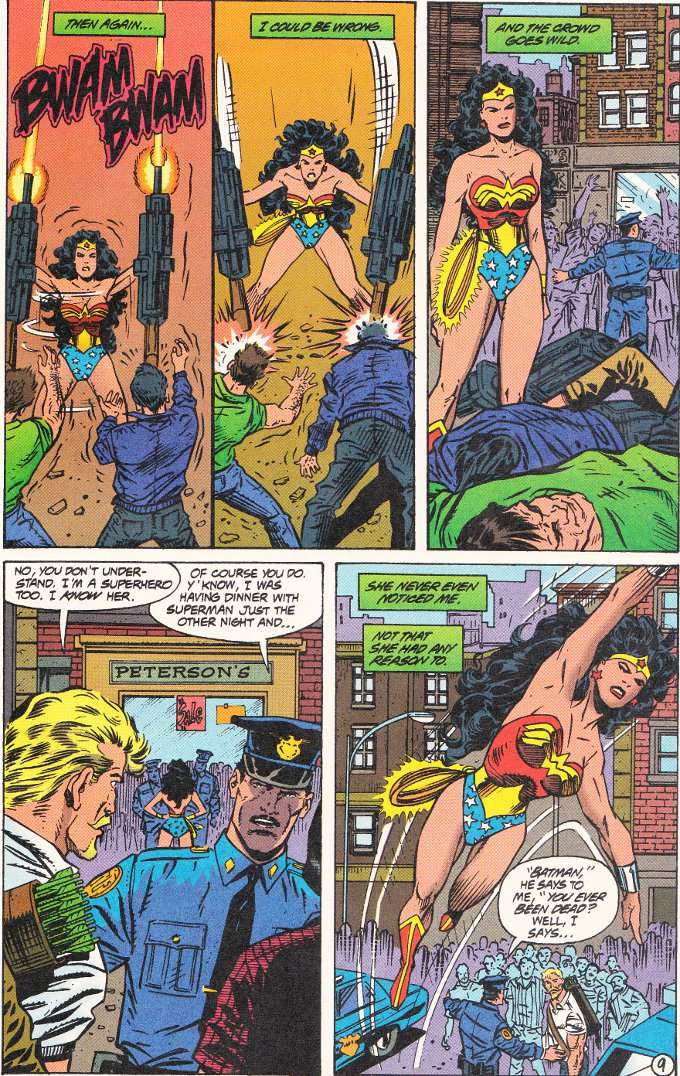 More depressed than ever, Ollie wanders off into an alley and starts playing a variant of kick-the-can that involves shooting it with an arrow rather than kicking it.  After his "can-arrow" passes through an open window and nearly hits a civilian, who sticks his head out the window to yell at Ollie, Ollie hears a ruckus in the next alley over.  By sheer coincidence, it's the homeless man Ollie spoke with earlier getting harassed by some random thugs who seem to be under the mistaken impression that the homeless man has something worth stealing.  Ollie thinks this is just the kind of thing he can handle... right up until someone sneaks up behind him and knocks him unconscious. 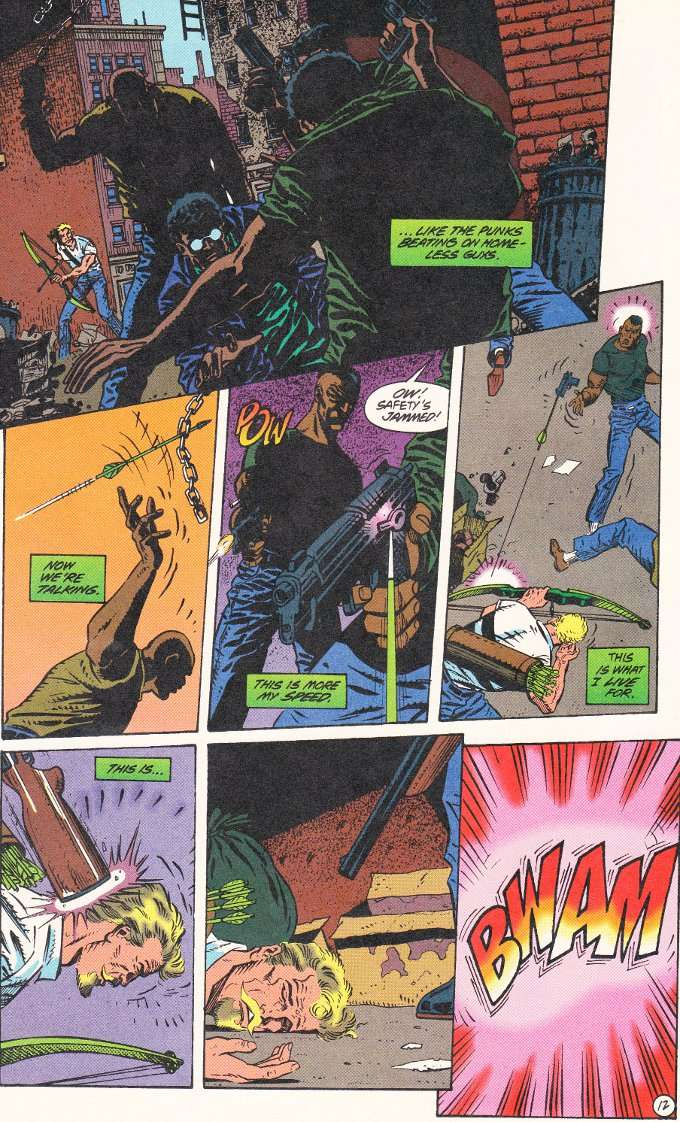 Everybody playing the drinking game at home, do a shot for Ollie getting knocked out.

Ollie comes to in the hospital sometime later.  Curiously, despite the fairly strict rules hospitals have about visitors - particularly the victims of violent crimes - the homeless man is waiting with Ollie in his room.  It is he, rather than a nurse, who explains that Ollie got hit from behind by the muggers' look-out. To add insult to injury, he reveals that the only reason Ollie is still alive is because he managed to pull a gun away from one of the muggers and scared them off with it.  So not only is Ollie completely ineffective at fighting alongside other superheroes - he can't even stop a simple mugging!  Our hero, ladies and gentlemen!

Shockingly, there is someone who may be having an even worse day than Ollie and he just woke up in the next room.... 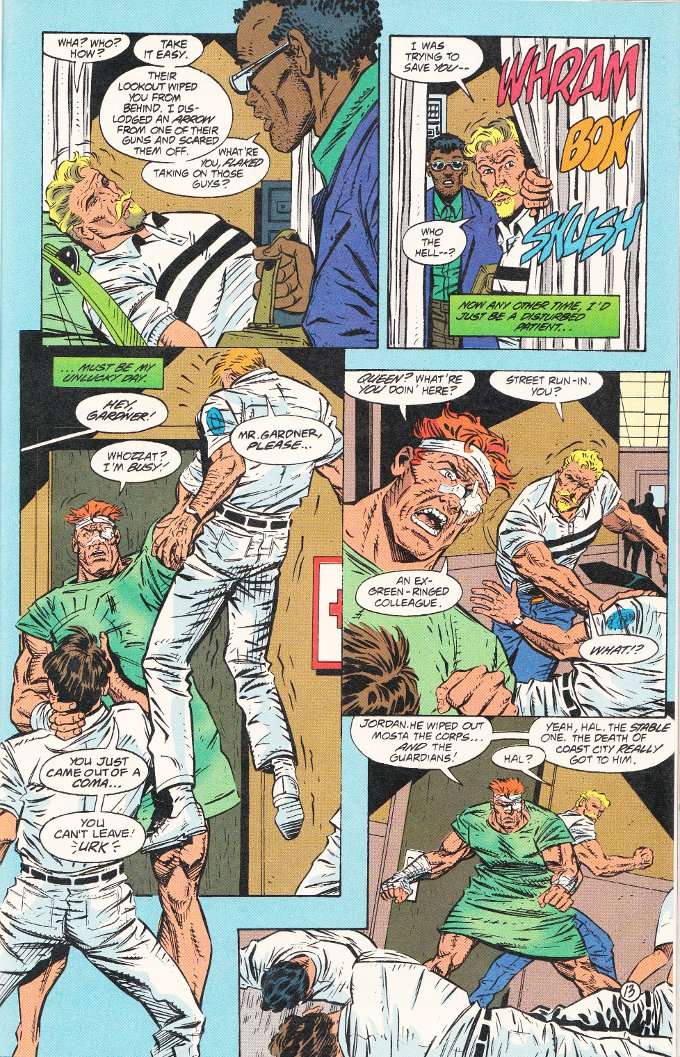 Yes, it's Guy Gardner - ex Green Lantern.  Referring to the events of Emerald Twilight (which was going on at the same time as this story), Guy explains how Hal Jordan - greatest of the Green Lanterns and Oliver Queen's best friend - has killed The Guardians of the Universe, absorbed their energy and gone mad with power.  Ollie offers to help as Guy leaves the hospital but Guy is quick to dismiss his help.  "Bow 'N' Arrows Don't Just Hack It," Guy says.

I'm not upset about this part because Guy Gardner honestly is thick-headed enough to not realize that - on the odd chance that 'more force' isn't the solution - maybe having the best friend of the guy you're trying to stop on hand might be a good idea.  Particularly when said best friend has a proven track record of being able to talk to the power-mad lunatic and get him to think about things he never considered before.  I AM upset because Ollie is honestly hurt by Gardner's words about bows and arrows not cutting it and doesn't dismiss them as... well, Guy Gardner being Guy Gardner.

Lacking anything better to do at the moment, Ollie follows the homeless man to the cardboard shantytown where he's currently staying.  He introduces himself as Bernie Feinstein and explains that he's a computer programmer who is down on his luck.  He then introduces Ollie to the rest of his friends, including the guy who runs the place. 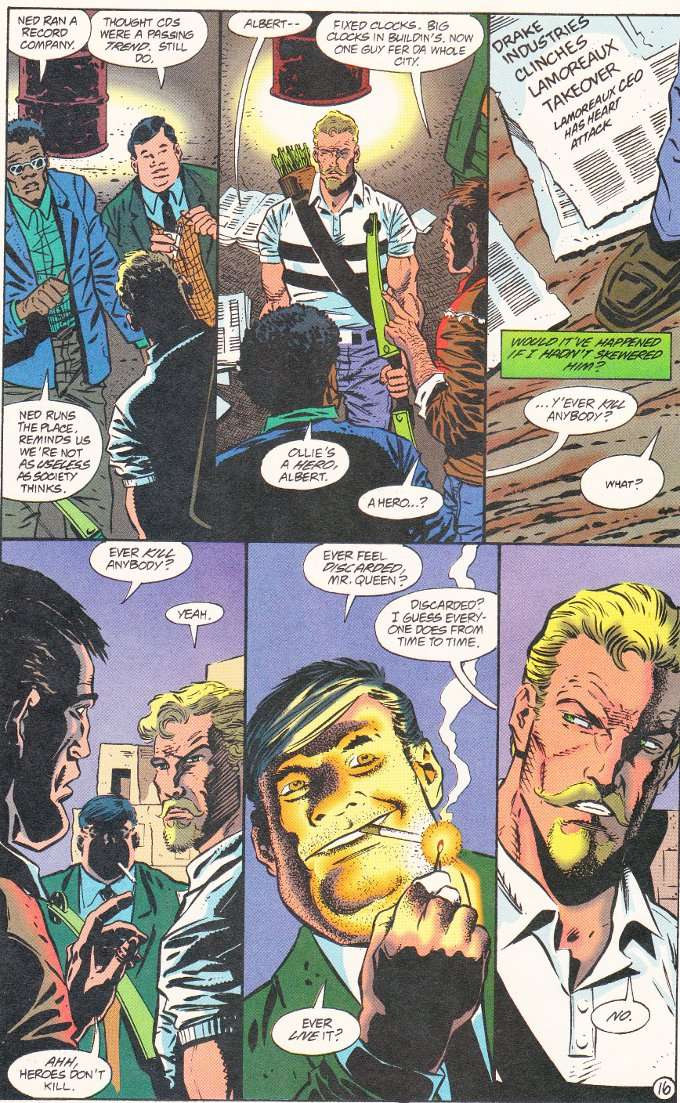 In the middle of this, Ollie is distracted by a newspaper on the ground which talks about Lamoreaux Industries (i.e. the company run by the incestuous rapist Ollie killed last issue) being taken over.  The paper indicates that the CEO died of a heart-attack.  Technically true as Ollie attacked his heart with a cloth-yard shaft.  Ollie muses as to whether or not that would have happened without him doing what he did only to be surprised as Ned asks if he's ever killed someone and is then told that heroes don't kill when he says that he has.  Before Ollie can respond, shadowy figures come out of nowhere, guns a-blazzing. 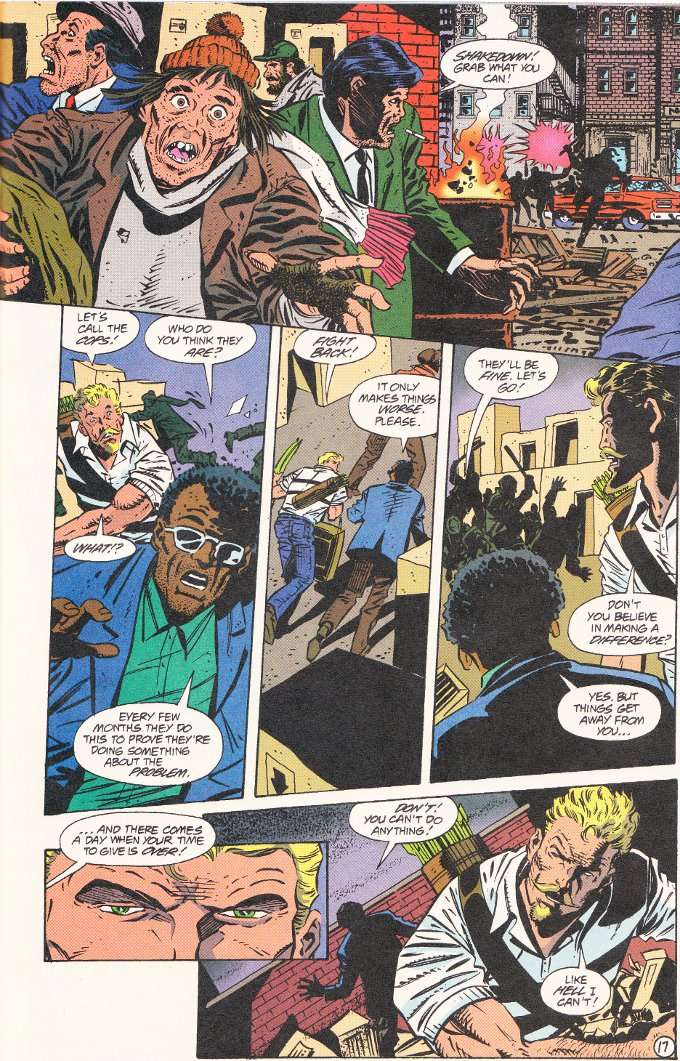 I'm sure I can find some way to make this bad situation even worse!

Given Ollie's track record so far in this comic and what we've seen of Kevin Dooley's story-telling style so far, what do you think happens next?

A) Martian Manhunter and Wonder Woman, who were finally tipped off that Ollie was in town after Guy Gardner signed in at the JLE and told them Ollie was in the hospital when he left, show up just in time to help Ollie fight the corrupt police.  The issue ends with them going back to the Justice League Embassy for chili, Oreos and milk

B)Ollie single-handedly repels the corrupt police officers, who run away like the cowards they are having not expected anyone to fight back, thus proving the power of one man standing up for what is right.

C) Ollie rallies the homeless men into an army, striking back at their oppressors, thus justifying his status as a modern-day Robin Hood.

D) Ollie nearly gets shot in the back and is saved only after Bernie throws himself between Ollie and the corrupt cop.  Bernie dies in his arms and Ollie is chewed out for trying to be a hero as the shanty town is completely destroyed and the homeless people are left with nothing.

Pencils down.  Everyone have an answer ready?  Good.
... 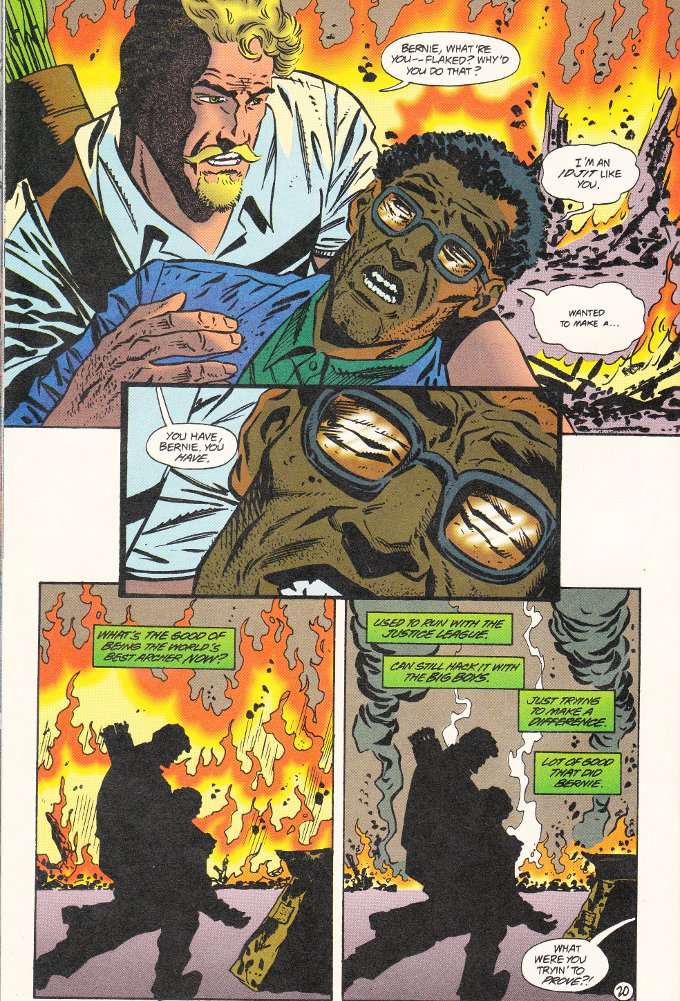 Anyone who didn't say D, smack the back of your hand for not paying attention! 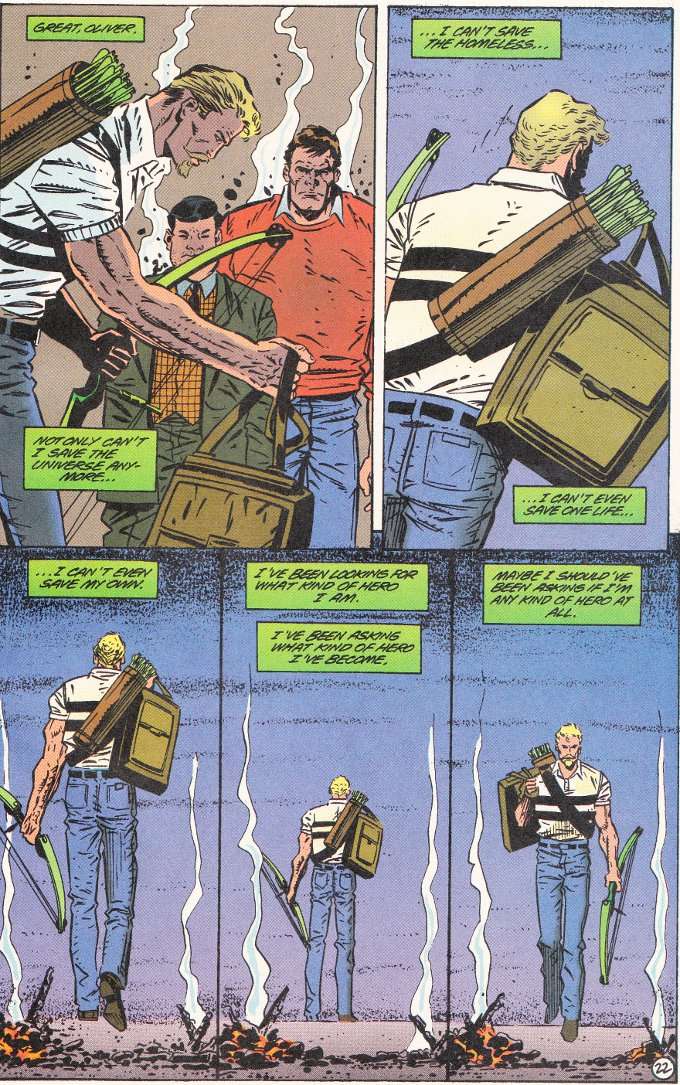 And so our comic ends with Ollie handing an envelope full of money to Ned (apparently, Ollie's Vegas winnings are still in it) and Ollie saying that he lied earlier when he said he wasn't living a life discarded.  Ollie then decides to go to the one place on Earth depressing enough to match his current mood - New Jersey!

No, really!  He decides to go to Gotham City.  It's in New Jersey!  Look it up in the DC Atlas!

This may well be the most depressing comic I've ever had the misfortune to read.  This comic holds the idea of heroism down and uses it for a toilet.  Our hero doesn't accomplish one heroic thing in the whole book.  Hell, he doesn't even manage to accomplish his stated basic goal of meeting up with his old friends!

If anyone needs me, I'm going to be doing something more cheerful than reading this comic.  Maybe listen to The Smiths while looking at pictures of abused animals.
Posted by Starman at 5:13 PM