John Carter: The Gods Of Mars - A No Flying No Tights Review 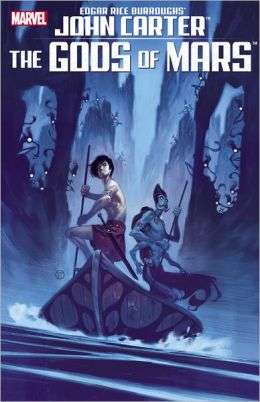 I stand as one of the few who seems to have appreciated the 2012 movie John Carter. I firmly believe it to be a good film that was destroyed by bad marketing. Originally titled A Princess of Mars after the pulp novel that inspired it, the film that became known as John Carter had its title changed repeatedly.  Reportedly, various executives worried that fathers and sons wouldn’t pay to see an action movie with the word “Princess” in the title. Never mind that the plot of the story focuses on a soldier traveling to another planet and gaining superpowers! Then they demanded all reference to Mars be removed from the title and the advertising in the belief that – since no movie with the word Mars in the title had ever been a blockbuster hit – people hated Mars.

Throw in an ad campaign that emphasized generic CGI desert landscapes over any of the truly alien wonders of Edgar Rice Burrough’s Barsoom and you can see why John Carter may have been doomed from the start, cinematically. To my mind this is a crying shame, because it had the potential to be so much more. The script had a perfect blend of action, comedy, drama, and romance. You had a strong, likeable hero. You had an equally powerful heroine. Heck, you even had the boy and his dog angle in the form of John Carter’s loyal companion Woola the calot! What more could a franchise ask for?

I mention all this because John Carter: The Gods of Mars is a direct sequel to said film, presented in comic book form. I also mention this because this graphic novel is similarly troubled in its presentation. The artwork on the front and back cover bears no resemblance to the interior artwork by artist Ramon Perez. Perez’s artwork is competent enough, though his panel-flow is confusing at times and his character designs leave much to be desired. Far too many characters resemble one another and it is fortunate that the story keeps John Carter’s true love – the warrior princess Dejah Thoris – out of the action for most of the book, as there is no way of distinguishing her from Thuvia, another Red Martian warrior woman, who teams with John Carter for most of the story.

A larger problem is the book’s coloring which, according to the credits page, was handled by no less than four individual colorists/coloring companies! The palette changes wildly from chapter to chapter, with the coloring used for John Carter’s skin changing frequently. Why is this a problem? Because coupled with so many characters looking alike, it is hard to keep some of the characters straight when Carter’s skin is as red as the Red Martians in some panels or as white as the White Martians in others. Things become even stranger in the flashback sequences, where Green Martians are yellow and the Earthman is the same shade of blue as the Black Martians.

The story, at least, is action packed and a fair adaptation of the original Gods of Mars story by Edgar Rice Burroughs. In fact, I dare say it’s a good enough adaptation that anyone who hadn’t read the original A Princess of Mars or seen the film John Carter will be completely lost as to who is fighting whom, and why. Sam Humphries’s script could have benefited from a recap at the start.

Another eyebrow raiser is this book’s all ages rating. Considering that the John Carter film was rated PG-13 and the language used in this adaptation is at a higher level than what I’d consider fitting for the “under 8” audience Marvel’s all ages works are aimed at, I’d recommend this book for Young Adult collections if I were inclined to recommend it at all… which I’m not. Give this a miss and consider the excellent Warlord of Mars series published by Dynamite Entertainment instead.