Doctor Who 2012 Christmas Special - The Snowmen 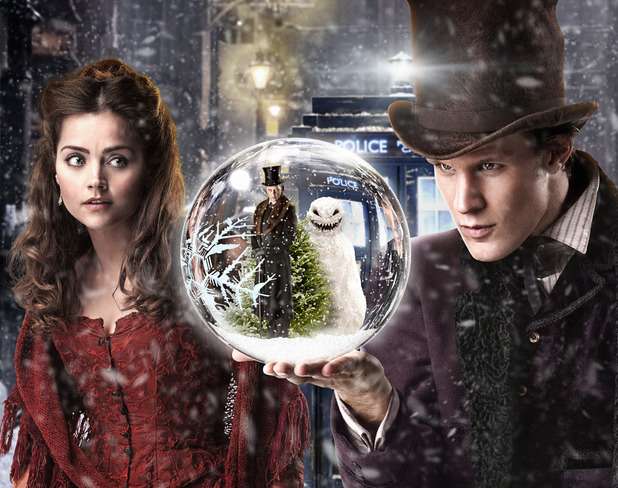 England.  1842.  A cold young boy, who doesn't like playing with the other children, hears his snowman talk, assuring him he doesn't need anybody...

Fifty years pass.  The cold young boy is now a cold old man and a Doctor.  Doctor Simeon.  His company is wandering about London, gathering up snow and filling a great glass globe in the doctor's office.  He plans to save the world...

Elsewhere in London, an equally cold and even older man broods in his house in the clouds.  He too is a Doctor.  And he too has planned to save the world countless times in the past.  But he has put such things behind him and nothing the few friends he has left in this world can do will bring him forth to adventure or explore, much less save the world.

One woman may be able to bring forth one Doctor to stop another with a single word.  A woman who is both a barmaid and a governess.  A woman The Doctor met once before.  A woman who likes making souffles.  A woman who may offer a solver of mysteries the greatest mystery ever...

* From the very moment we see snowflakes with fangs raining down on the Earth from space, we know this is going to be something special.  Steven Moffatt brings forth outlandish ideas and childish fears like a fountain gushes water but he usually makes them work.  The man who brought us life-stealing statues and shadows that eat people has now given us something new to be afraid of - carnivorous, telepathic snow that remembers.

* The new opening gave me chills.  It's the perfect thing for kicking off the 50th anniversary of Doctor Who, encompassing parts of the introductions to all the classic Doctor Who episodes.  The journey through space.  The flickering tunnel of light.  And Matt Smith's face looking back at us.  Perfection.

* On that note, every single Sherlock Holmes joke.

* Strax the Sontaran Butler.  Every bloody moment he's on screen is comedy gold.

* Matt Smith playing the Doctor as a more subdued figure.  It's too early to tell how long this may last (he seems manic enough at the end) but Smith does a grand job portraying how The Doctor's most recent losses have changed him yet again, reducing him to a state not dissimilar to where he was after the loss of Rose Tyler - the companion who also shook up a very old, very cold Doctor.  Perhaps it's no coincidence that the woman who shakes him out of his doldrums works in a bar called "The Rose and Crown"?

* Jenna-Louise Coleman.  I loved her back in Asylum of the Daleks.  I love her even more now.

* While Moffat's script is strong, it's also full of references to previous episodes.  While that's fine for long-time fans of the show, the Christmas Specials have usually been open and accessible, requiring no previous knowledge of the show in order to watch them. For all it does right, The Snowmen is still the middle of about three separate stories, making this poor fodder for trying to convert your family members who haven't heard of Doctor Who before this holiday season.

* The 'one word' test The Doctor has Madame Vastra is a bit unbelievable.  While it's totally believable that The Doctor would be so petulant about refusing to help people who fail to interest him or to get to the point (there's Sherlock again), we are damn lucky Clara chose the word "pond" instead of "pool".

* Clara could be shaping up to become another of Moffat's Mary Sue female characters, ala Amy and River.  A brilliant woman who has the added benefit of having some form of apparent immortality or reincarnation?  Doesn't get much more Mary Sue than that.

If you've been watching Series 7 so far, it's brilliant.  If you've never seen Doctor Who before, it'll be confusing.  If you have family who are just now hearing about the show or saw it on the cover of TV Guide, this is not the episode to use as an introduction to the series.  I'd suggest The Christmas Invasion for that.  But for those of us long-term Whovians, it is a delight.
Posted by Starman at 9:56 AM