Subtitled 'Limbo', Arrow #12 has nothing to do with dancing under a stick and everything to do with a state of uncertainty.  Oliver Queen's night of crime-fighting takes a decidedly darker and more personal turn when the path he's tracking to a drug shipment turns into a walk down memory lane.  However, the memories that wash over Ollie are not pleasant ones and he must struggle to bring the drug dealers to justice while combating his own personal torment as he lays siege to a yacht not unlike the ship he lost his father and lover on. 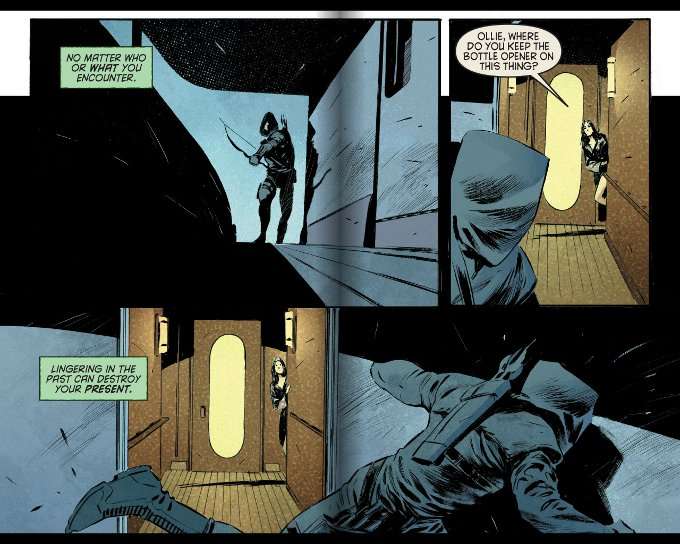 Though I'm not a psychologist and have no psychological training apart from some college-level course work, I've felt that Arrow has done a good job of portraying Ollie's Post-Traumatic Stress Disorder.  At the very least, it's done a better job than earlier Green Arrow stories which never examined the psychological trauma Oliver Queen would have likely experienced after being shipwrecked for any length of time.  The script by Emilio Aldrich continues in that vein, showing that for all his heroism Ollie is still a deeply troubled man.

Aldrich's script is well depicted by Julian Totino Tedesco's artwork.  There is a roughness to Tedesco's work that fits the harshness of the story.  Reminiscent of Jock's work on Green Arrow: Year One,  Tedesco utilizes thin lines and heavy silhouettes to dramatic effect.  The final product seems detailed yet sketchy, but not in a way that suggests incompleteness.

If you haven't given the Arrow web-comic a shot yet, this would be a good one to set your sights on trying.  The script is thrilling, the artwork stunning in its' subtlety and it's an all-around good read.  Highly recommended.
Posted by Starman at 3:35 PM