How wrong is it that I find a throw-away concept from the first page of Batamn #14 more interesting than the rest of the book?  We open on Batman, trapped in a vat that is quickly filling with the same chemicals that created The Joker.  Lured there by Harley Quinn, she muses that maybe he'll become as crazy as The Joker and wind up being like he used to be "back then".

Not that what follows this is bad but I'm fascinated by that concept - Harley Quinn tries to make a new Joker that fits her idea of what "Mistah J" should be.  It would be the full cycle culmination of their relationship, with Harley finally becoming a true equal to The Joker in monstrous behavior - psychologically trying to shape others toward her own ends!  It would also be a damn-sight more interesting than anything else they've done with Harley ever since her transformation into a Suicide Girl with a clown fetish.  But I digress. 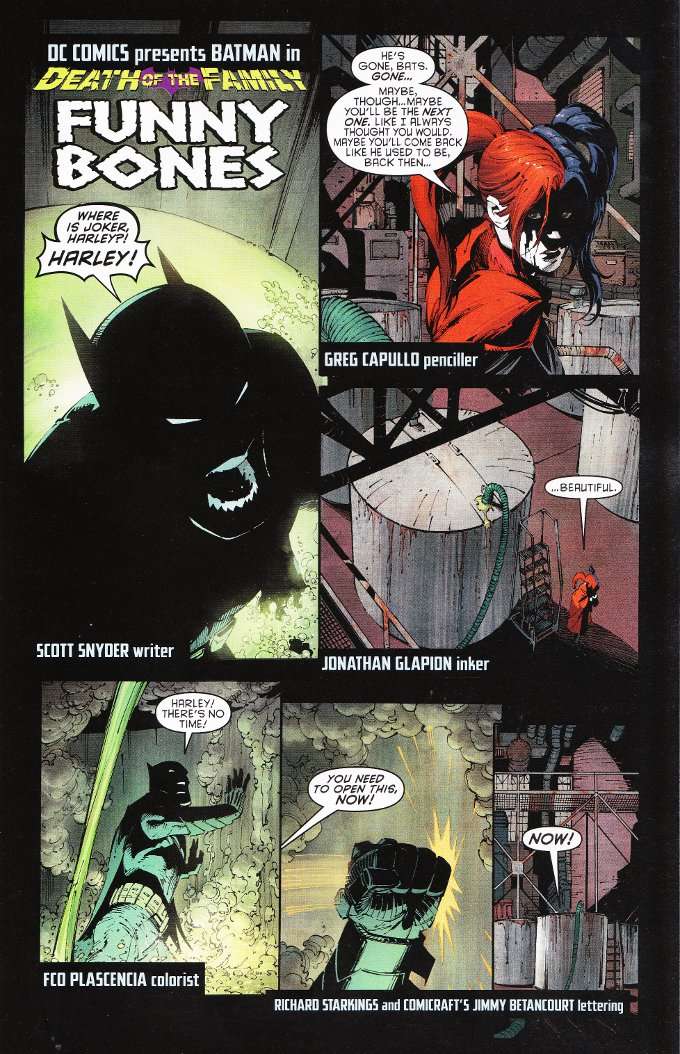 Naturally, Batman gets free of the trap and returns home to find that The Joker has kidnapped Alfred.  The good news is that he doesn't think The Joker has figured out his secret identity.  The bad news is that still doesn't bode well for Alfred or anyone else in Gotham, since The Joker is loose and needs Alfred for a big party he's planning, as he's going about reenacting some of his earliest crimes with new twists.  After his latest attack leaves Jim Gordon in the hospital, Batman determines to take The Joker down alone rather than risk the lives of his allies needlessly.

Scott Snyder does a great job of keeping the action flowing.  More, he actually keeps us guessing as to what The Joker is up to and what his next action will be.  He understands that first and foremost, The Joker is a comedian playing to an audience.  Indeed, he takes that conceit a step further here and has Joker likening himself as a court jester to the Batman's King of Gotham.  This leads to a truly shocking climax in which Joker, like the fools of old, delivers some bad news to "his lord" with a smile.
. 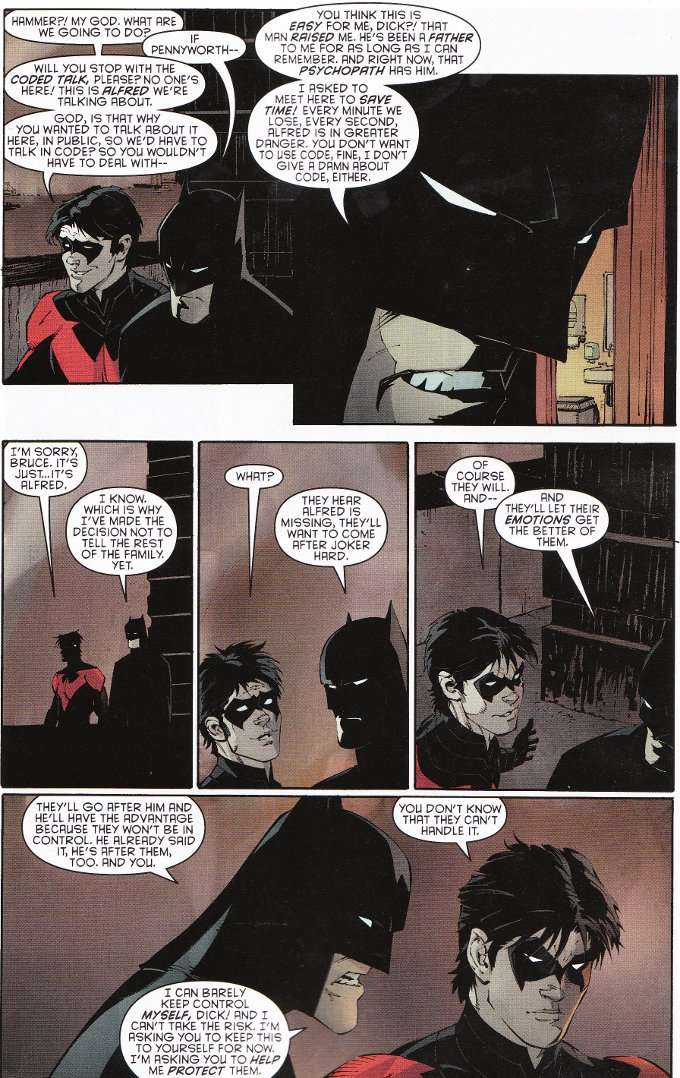 The art team proves as strong and capable as ever, though I do find Greg Capullo's expressions on Nightwing to be somewhat inappropriate.  There are several panels where Dick seems to be ginning like an idiot when the dialogue suggests he should be biting his lip or yelling at Bruce.  That's the only quibble I have with some otherwise excellent artwork.  Glapion's inks, though hard to see at times among the dark colors in the palette chosen by colorist FCD Plascencia, are skillfully applied at the points where the inking is obvious.

Batman has drawn high praise as one of the best books DC Comics published in recent months.  It is well deserved.  Pick up this issue and find out why, if you have not already.
Posted by Starman at 7:00 PM