With this issue, Tony Bedard has exhausted my patience as well as what little credit I was able to extend to him.  Bedard's writing has missed with me more than it has hit but I was willing to give the man his due since his Green Lantern writing was largely good up until The New 52 relaunch.  Plus, he was the only writer working with Green Arrow (albeit it briefly, through Birds of Prey) who acknowledged that Oliver Queen was a rape victum that he had never cheated on Dinah Lance until after his return from the grave..

So why now?  Why has New Guardians #13 accomplished what an entire year of completely pointless meandering didn't and made me drop this title?    Because this issue, released over a year since we should have received a full backstory for Kyle Rayner, reveals that the only part of Kyle's backstory that has remained constant is the one part that honestly could have - no, should have been changed.  I speak, of course, of the incident that coined the phrase "Women in Refrigerators" - the death of Kyle's girlfriend, Alexandra DeWitt. 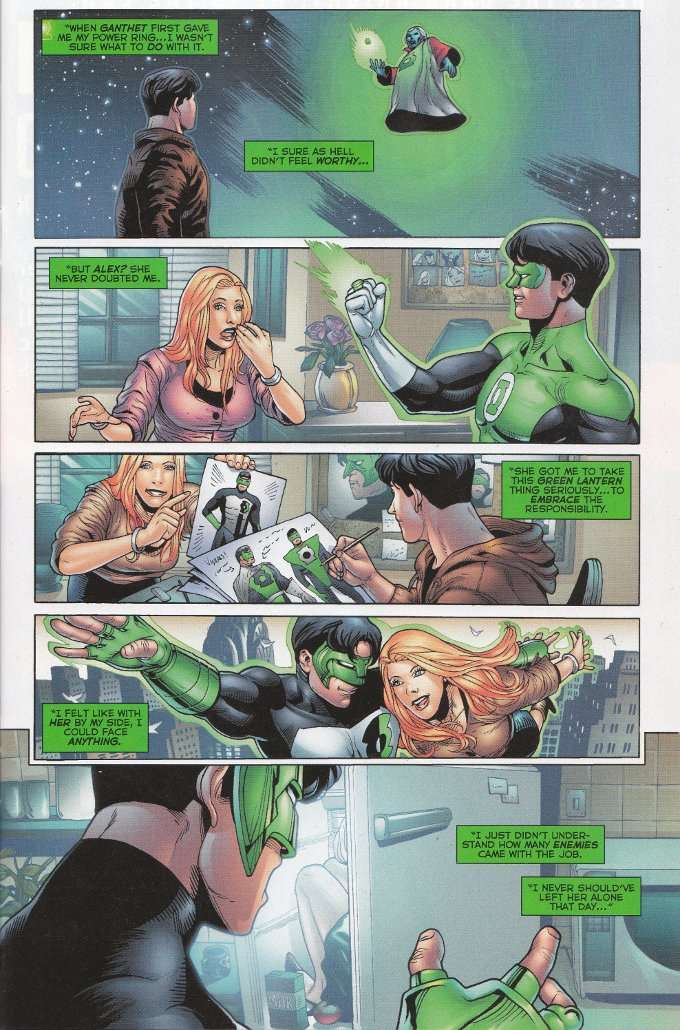 I've written before about Alex as a character and the ramifications of her death, so I won't repeat those arguments here.  I will say that given that most of Kyle's previous love life is now impossible since three of his four ex-girlfriends never existed in the New 52 universe (Donna Troy, Jenny-Lynn Hayden-Scott and Soranik Natu, for those keeping track), it really adds nothing to Kyle's character to have Alex exist in this new reality only for her to die horribly again.  It's particularly vexing here since Major Force - the villain responsible for the death in the original universe - no longer exists in the New 52 universe and the flashback we see here just has Kyle refer to non-specific enemies that came with his job being responsible for Alex dying.

It may be unfair of me to blame Bedard for the decision to bring Alex back only to have her die again.  The decision may have been handed down by DC Editorial.  But I can blame Bedard for the poor execution of this story.  Say what you will about Ron Marz but while he freely admitted to creating Alex only so that she could be killed off, at least he spent a few issues building her as a character so that you cared when she was taken away.

Bedard fails to do that and fails to make this issue, which apparently follows after the most recent issue of Red Lanterns, stand on its' own merits as a story on any level.  What is meant to be the first hard lesson Kyle learned as a hero and his defining tragedy is reduced to a footnote, revealed in the middle of a training montage as Acrocitus of the Red Lanterns tries to teach Kyle how to harness the power of Rage without a Red Lantern ring. 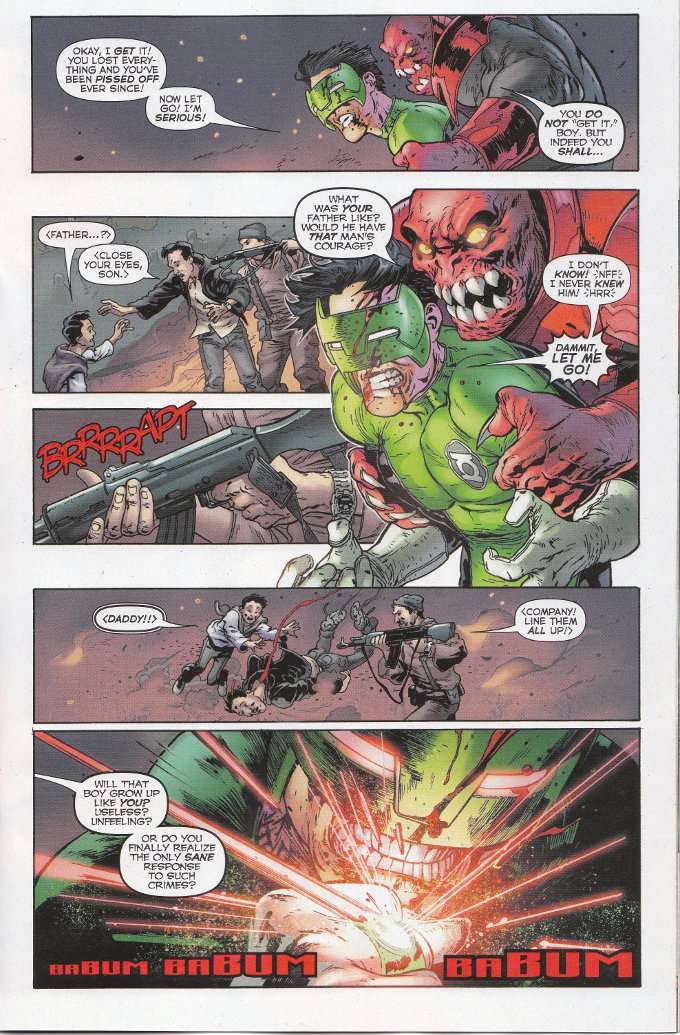 You wouldn't think the artwork could possibly make this mess of a story any worse.  Somehow, Andrei Bressan and Amilcar Pinna manage it.  In reviewing the last issue, I compared Bressan's artwork to that of Frank Quietly, noting the similar detail-oriented styles while also noting that Bressarn was a poor visual storyteller.  Those problems continue throughout this issue, as well with the pages I think were drawn by Amilcar Pinna, which  resemble nothing less than a poor parody of Rob Liefeld, with tiny eyes and consantly gritted teeth.

Do not buy this book.  Do not even read it in the shop.  Go spend your money on Green Lanterns Corps and leave this one to die.
Posted by Starman at 9:36 PM