Anthology titles are a difficult sell to modern comic book readers. It is difficult enough for a reader to justify purchasing a title starring familiar characters with artwork or scripting by a creator they enjoy in these tough economic times. It is harder still to convince an empty-pocketed reader to part with double the price of a regular comic for a collection of stories they might not entirely enjoy. Even the name of a respected writer with a rich body of work like Robert E. Howard makes such a thing a challenge. But sporadic though the publication of this book is, averaging two issues a year since it first premiered in late 2010, Robert E. Howard's Savage Sword has always proved an engaging read. 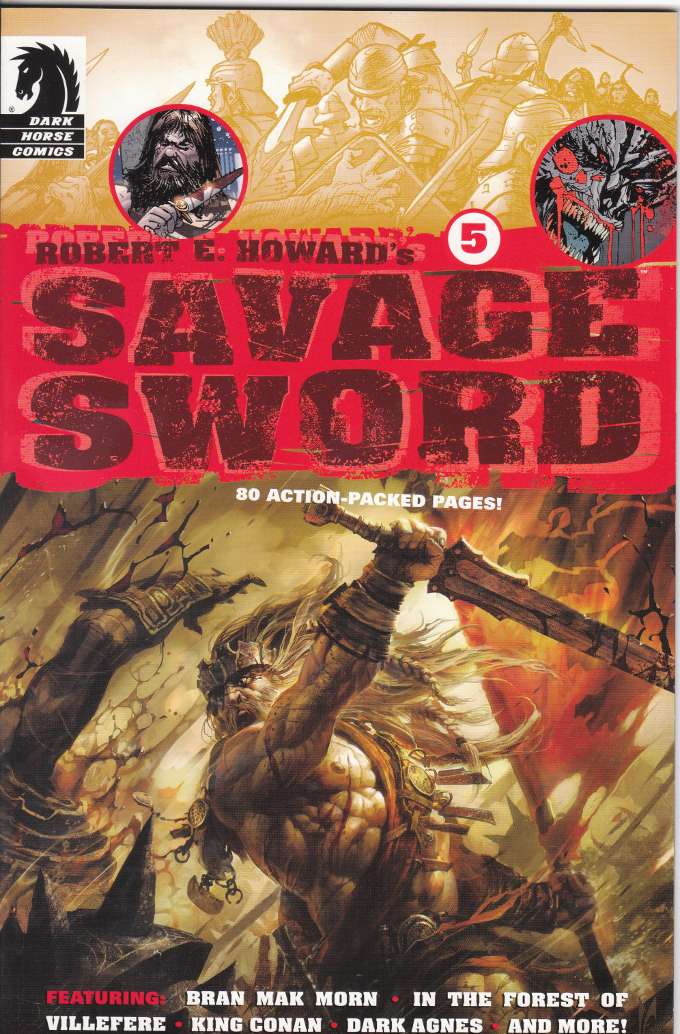 This issue offers less variety than previous installments, though the quality of workmanship remains the same as ever. This volume is almost entirely comprised of sword-and-sorcery tales. This doesn't offend me but it does seem to defeat the purpose of this series, which I believe was meant to draw attention to some of Robert E. Howard's creations besides Conan and Kull.

Even the one non-fantastic story in this collection has elements of the fantastic in it. I speak of In the Forest of Villefere -a historical horror piece adapted by that master of modern horror, Steve Niles. Paired with his artistic partner from Criminal Macabre, Chris Mitten, Niles borrows heavily from the original Howard text. This proves to be a wise move, though the twist of the story is rather obvious. Mittens does a fair job setting the moody tone of the story, though the protagonist looks just as warped and tinhuman as the foreboding landscape. 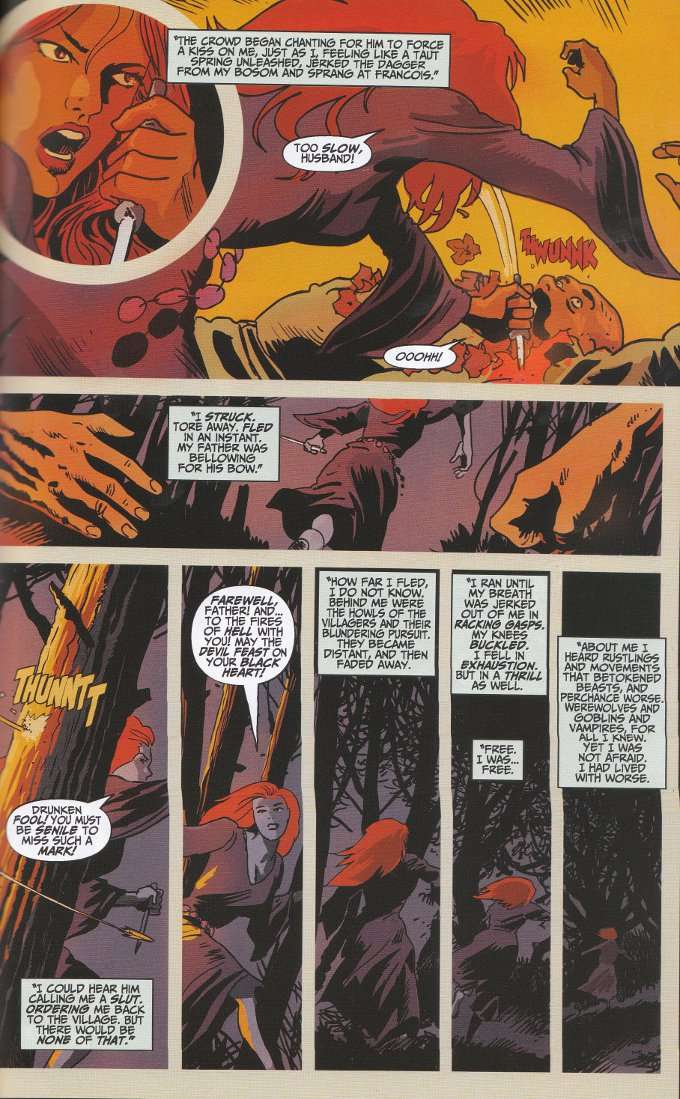 For my money, the best story in the batch is a retelling of the origin of Dark Agnes - a crimson-haired warrior woman who deserves far more fame than she's ever achieved. The script by Paul Tobin depicts Agnes as a woman ahead of her time, strong-willed and unwilling to be bullied into a marriage she doesn't want by her boorish father. The art by Francesco Francavilla perfectly depicts Agnes as a beautiful woman and a capable fighter - a feat that seems to elude many sword-and-sorcery artists, who draw every heroine like a supermodel. Those who dismiss Howard's writing as sexist purely because of his Conan stories would do well to check this issue out as well as the original stories.

Speaking of Conan, the one original tale in this anthology - based on Howard's characters rather than on a specific story - is a King Conan tale written and drawn by the legendary Howard Chaykin. The artwork is gorgeous but the plot - involving Conan's investigating the murder of a harem girl in his own palace - doesn't seem much like a Robert E. Howard story or indeed a Conan story. While Conan is far from the muscle-headed dolt many authors depict him as, puzzling out the details of a killing Sherlock Holmes style seems somewhat out of character for the world's most famous barbarian.

The first and last tales of this anthology are perfect bookends. The first tale, written by Ian Edgington with art by Richard Pace is an adaptation of Howard's Men of the Shadows - the first story to star his warrior chief tan hero Bran Mak Morn. The last tale, Kings Of The Night, is a reprint of a classic Roy Thomas adaptation with art by David Wenzel. I believe this story marks the only time that Robert Howard initiated a crossover between two of his own creations. In this case, King Kull of Atlantis is brought forward in time to aid Bran Mak Morn in leading a rough union of barbaric peoples against the invading Romans. 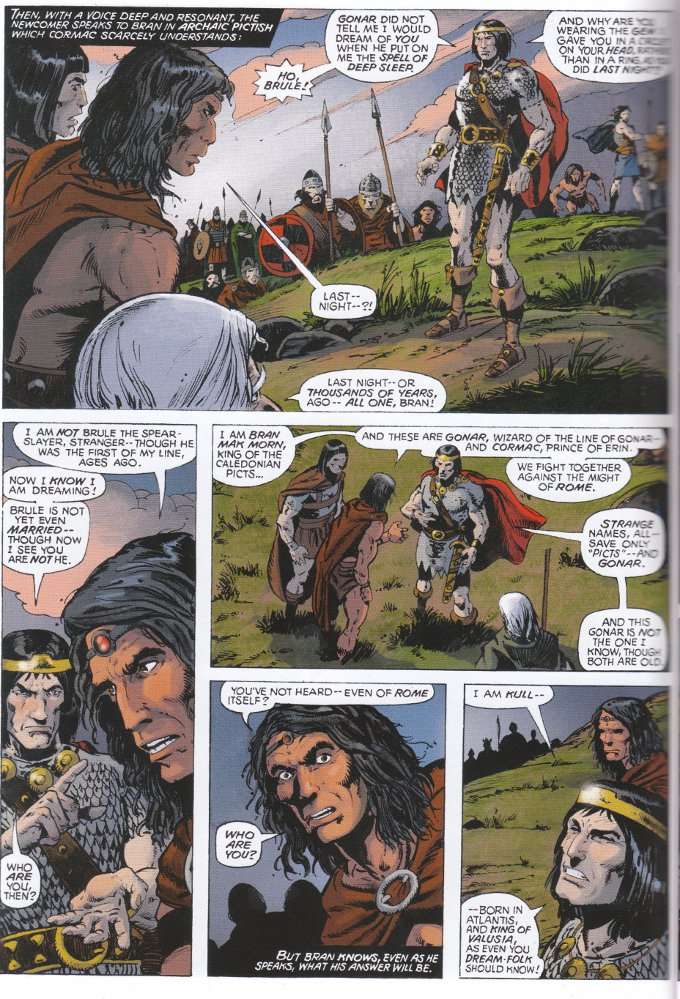 I cannot recommend Robert E. Howard's Savage Sword strongly enough, though at the same time I cannot recommend it to everyone. Like certain wines, this book will only appeal to those with a certain palette. But if you are the sort of reader who enjoys the kind of entertainment that might be more appropriately described as a ripping yarn than a story, I don't think you'll get better value for your money than you will purchasing a copy of this book.
Posted by Starman at 4:05 PM