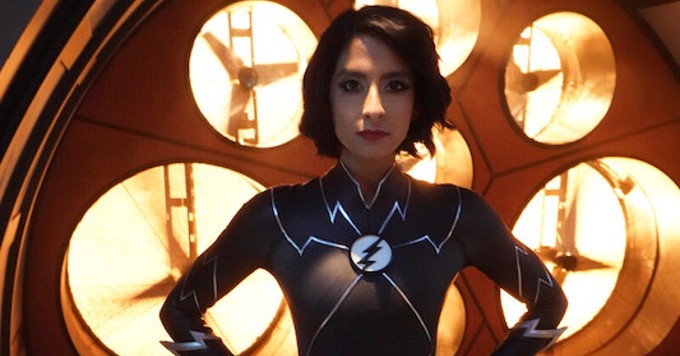 Team Flash go into the fight of their lives, as Iris discovers the true cause of her time sickness.

The Flash comics of Joshua Williamson.

Matt Letscher and Kausar Mohammed have great chemistry together as Eobard and Meena.

The effects for the fight between the three speedsters and the Negative Force Hosts are good.

The video game which Impulse and XS play as the episode opens feature a race of squid/clam warriors known as the Klamulons. In Young Justice, the Klamulons are a fictional alien race in the fictional television series Space Trek 3016.

Chester is able to briefly trap the Negative Strength Force host using an inverse energy trap that generates a stronger force field the more power is thrown against it. This is similar to the technology used by the hero Rocket in Milestone Media's superhero universe.

As of this episode, Mena's top speed is Mach 1.78, which is double her last recorded speed. She tries to push herself to Mach 2, but her heart gives out.

The pod Chillblaine designed uses cerebral circuitry that should stimulate, and then reactivate Frost's residual subconscious left inside Caitlin's mind. Once that is done, they can work on creating a new body for her.

(Barry has revealed his secret identity to Meena.)
Meena: So the fastest man alive is a badge with a day job? That's so... Ordinary.
Barry: Yeah, that's my point. You'd be surprised at people's capacity to rise up and help others during a crisis. They just need to be given the opportunity. That suit, that's your opportunity. I think you're gonna be surprised at how well it fits, but you have to give yourself the chance.

As the episode opens, XS and Impulse are playing video games together in 2049. XS is naturally talented at the game, to Impulse's disappointment.

Impulse tries to lie to Iris about studying for midterms, but she sees through his deception.

By 2049, Iris has won two Pulitzer Prizes for her reporting.

Iris called to ask Nora to write a follow up to her last article, but suddenly fades out of existence on the phone.

Just after the older Iris vanishes, the 2022 Iris appears in the loft apartment.

Iris says the last thing she remembers is being in her office with Taylor. This occurred in 814.

The 2049 Barry is said to be off world with Jay Garrick.

XS tries to run Iris back to 2022, but a barrier prevents her from doing so. She recognizes the particles that she runs into as being part of the Still Force and thinks that Deon is trying to keep Iris in the future, for some reason.

Back in 2022, Chester and Barry have made a superhero costume for Meena, modeled on the Flash suit, but in black. Like Barry's suit, her costume has sensors that allow her vitals to be tracked at STAR Labs.

Meena doubts that she'll ever be a hero.

Barry reveals his secret identity to Meena and tells her that if someone ordinary like him can help people, so can a genius like her.

Meena struggles with an idea for a superhero name. Barry suggests Fast Track, like her lab.

On Lian Yu, Deon uses his powers to kill the Reverse Flash, seemingly aging him to death in seconds.

Barry runs to Lian Yu after Chester detects a major energy surge there.

Cisco installed a secure comm link on Lian Yu after the last time Barry visited there in 818.

Barry discovers what is left of the Reverse Flash.

Joe discovers that Cecile was patrolling the streets as a superhero. He is upset because she lied about working late.

Cecile says she can now induce vertigo in people, like The Top.

The Top is confirmed to be the figure who was watching Cecile in 818.

Cecile reveals that she got the idea that she could temporarily borrow the mental powers of nearby psychic metahumans.

The Top says it is not temporary and Cecile stole her powers outright.

Joe calls in a favor with Chief Singh to get two visitor passes to the metahuman wing of Iron Heights to test the theory that is why Cecile had done.

In 2049, Jay's wife, Dr. Joan Williams, confirms that the cause of Iris time sickness is her body being flooded with negative tachyons.

Iris has a vison of the Force Hosts - Deon, Bashir and Alexa - but they seem different some how.

XS tries to go back in time to get the 2022 Barry, while Impulse stays behind to protect Iris.

Meena is continuing to push herself harder, despite Eobard telling her she's risking her life doing it.

Deon, Bashir and Alexa appear to Meena and Eobard, saying they've come to kill him.

Deon, Bashir and Alexa claim to be incarnations of the Negative Still Force, Negative Sage Force and Negative Strength Force. They claim to be manifestations of "the true Forces of the universe, ones written in darkness" and say they have come to kill Eobard, the last variant of Eobard Thawne in the timeline, so that he can fulfil his purpose.

The Negative Force Hosts are responsible for the disappearance of the regular Force Hosts, including Speed Force Nora.

When Eobard asks why they are trying to kill him he is told that he is "not the Avatar" and that his being here makes the Negative Forces weaker.

The Negative Force Hosts also tell Barry that he will pay for what he did.

Back at Caitlin's apartment, Caitlin and Chillblaine have finished work on the pod he designed.

Barry sends XS back to 2049 to help Impulse protect Iris.

Cecile and Top confront Queen of the Royal Flush Gang (i.e. Mona) while she is in custody.

Cecile steals Queen's telepathic powers and is able to read the mind of every person in Cenrtal City, despite being in a meta-dampened prison cell.

Meena continues to push herself because she's afraid of letting Eobard down.

Eobard says that Meena makes him proud and that he loves how she's using the gift she wanted to give him to help others.

Barry says he thinks he knows a way that Meena can share her power with Thawne, using the connection they share through their love for each other.

Cecile, Allegra and Chester work together to try and delay the Negative Force Hosts as Barry tries to help Meena empower Thawne.

The Negative Still Force sends Cecile, Allegra and Chester away.

In 2049, Iris has more time visions, saying that she can see things changing, but not with any clarity.

Iris goes back to 2022 to see what is happening, arriving just as Barry is trying to throw lightning at the Negative Force Hosts. This seems to kill Iris, who vanishes in a puff of green particles.

The Reverse-Flash with the face or Harrison Wells emerges from the body of Eobard Thawne, after ripping himself out of it.

A bit of a mess, all over. Nobody was clamoring for the Force Avatars to return, and their evil twins are even more shallow and nonsensical somehow. One suspects the story doesn't really make sense and there's way too many subplots that don't go anywhere. Maybe the ending can make this worth it, but I doubt it.