The Flash Episode Guide: Season 8, Episode 15 - Into the Still Force 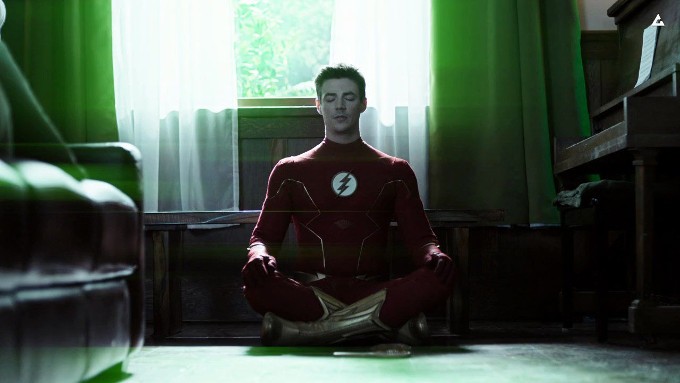 When Iris disappears, Barry and Deon must travel into the Still Force to find her. Meanwhile, Chester makes a horrifying discovery when the CCPD call him in to look at some strange technology, as Caitlin forms an unlikely alliance with Chillblaine to bring Frost back to life.

The Flash comics of Joshua Williamson and Frankenstein (Chillblaine compares Caitlin to Dr. Frankenstein in her efforts to create life.)

Sue Dearbon disappears from the storyline without explanation at this point. (Come to that, we didn't see her at Frost's funeral...)

Chillblaine's sudden decision to help Caitlin after refusing to do anything seems to be based around the need to stretch out her storyline and add some drama to it and nothing else.

The CGI saber-tooth tiger that randomly appears outside of Joe's house in the Still Force is completely random and not that convincing to boot.

The revelation that Bart and Nora are okay seriously undercuts all the tension regarding Iris' disappearance.

Jessica Parker Kennedy is as engaging as ever as Nora and single-handedly steals the episode.

The direction used to distinguish the Still Force from reality is rather effective.

While Barry is in the Still Force and having visions of his past, present and future, he joyfully says the name Max. This is likely a reference to Max Mercury - a time-traveling speedster from the comics who was a mentor to Barry Allen and, later, the guardian of Bart "Impulse" Allen.

Barry also makes reference to seeing XS's wife in the future. This confirms that the new XS is a lesbian. The original XS from The Flash season 5 was also a lesbian according to showrunner Eric Wallace, but it was never referred to beyond the suggestion that Nora had a crush on the best friend who was killed by Godspeed and her flirting with Spin in 504.

By using one of Mirror Monarch's R-CEM chips to replicate Frost's cryogene, Caitlin thinks she can create a new body for Frost and recreate her through the same process that gave her a separate body.

Caitlin says she has identified Frost's latent empathic genes within her own DNA and believes she can extract her active imprints from the DNA of Frost's body.

Caitlin says the keratin in the sample of Frost's hair she took is decaying too quickly, so she needs a stronger DNA sample.

Barry uses an isotopic sensor to find the particle Deon planted in Iris.

Chester confirms that the strange device from the halfway house is based on his quantum coil transformer, after he discovers that the interior was hardwired with a unique energy converter he designed.

Barry: I'm proud of you.
Nora: So you're not mad I didn't join CCPD like you and Grandpa Joe?
Barry: No, of course not. I'm just... I'm glad you found a path that's right for you.
Nora: Phew. So, um, the thing is, is that I'm having a really hard time finding my voice as a reporter. But Mom is teaching me to have faith in myself and listen to my instincts. And if she were here right now, she'd tell you to do the same. And that everyone loses faith in themselves sometimes, even heroes. But learning how to keep believing in yourself when the whole world is telling you the opposite, that's what makes a hero.
Barry: You really are your mom's daughter.
Nora: (beaming) Well, I'm yours too.

Barry wakes up to find Iris isn't there for breakfast. He checks his phone and finds a text message informing him she planned to pull an all-nighter at work.

Barry goes to the Central City Citizen with breakfast to find Iris isn't there either. She left her phone behind, which has 8 text messages she didn't respond to and 5 missed calls. Also, her latest article, about Fast Track Labs, is barely started and still pulled up on the computer..

Cecile is at STAR Labs when Barry arrives, intending to use the satellites to search the globe for Iris. She claims to be hanging out there to avoid a new metahuman client. for some reason.

Cecile is unable to sense Iris' presence with her empathy powers and is confirmed to be powerful enough now to scan a 5-state radius around Central City.

It is suggested that Tinya Wazoo's powers might have had a hand in causing Iris to vanish, leading Barry to travel to Central City to search for her.

Caitlin tries to get Chillblaine to help her make a new body for Frost.

Chillblaine asks how they can restore Frost's soul.

Chillblaine objects to Caitlin's plan, even before she talks about an exhumation, which she can order as a medical doctor and Frost's next of kin.

Chillblaine makes reference to Caitlin trying to resurrect Ronnie Raymond in 811 and that being a total disaster. He compares her to Dr. Frankenstein and says he wants no part of her plan.

Tinya Wazoo tells Barry she doesn't care about Iris and won't help him, because she ruined her life.

As Tinya leaves Barry, time stops around him and Deon Owens shows up.

Deon says that Iris is in the Still Force, but that the time sickness is making it hard for him to stay focused, so he needs Barry to come with him to find her.

Chester plans to repair the isotopic sensor so Barry can use it to find Iris in the Still Force. He says it will take him less than an hour.

Joe asks Barry how they can be sure Deon can be trusted, being skeptical of his statement that he needs Barry's help.

Barry says he tried to speak to the other Force avatars, but can't find them. Deon says he thinks the time sickness may have spread to them as well.

Captain Kramer calls Chester to ask for his help in analyzing a strange high-tech device they found at a crime scene. Chester agrees to help having just finished getting the isotopic censor fixed.

Barry and Deon return to the same point where Deon first explained the time-sickness to Barry in 716. This is later identified as Central City Memorial Park, though Deon refers to it as his front porch since he can see everything from there.

Barry sees first-hand what Deon said about the Still Force becoming more dangerous and unstable, with night suddenly shifting to day in the blink of an eye and people aging and de-aging at random.

Barry picks up a newspaper which originally described the explosion of the STAR Labs Particle Accelerator in 2013. It changes to a May 4. 2024 edition, which discusses the destruction of Central City at the hands of Zoom and Godspeed teamed-up.

As Barry and Deon track the particle into the Central City Citizen offices, they see a hologram of Taylor and Allegra arguing. Allegra keeps saying "Taylor, don't. This is my life, my decision. It's not what you think." as Taylor repeats " They need to know... they... they need to know what you've been hiding." This seems to suggest that Taylor, who was wanting to investigate Team Flash and had threatened to destroy Allegra's career, will figure out that Allegra is a metahuman and part of Team Flash at some point in the future and threaten to expose her.

Barry and Deon discover Renee Wazoo, who disappeared into the Still Force after she touched Iris in 810.

Barry wants to stop the search for Iris to try and find Renee after she disappears, but Deon says they have to stay focused on Iris.

Captain Kramer has decorated her office with Indigenous artwork, which reminds her of the reservation she grew up on.

The device the CCFD found came from a halfway house in downtown Central City, where there was an explosion. The device in question was attached to the water heater of the house. Thankfully, nobody was harmed thanks to a tip being called in regarding the explosion before it happened. All 37 occupants of the house were evacuated before an energy wave took out the building.

Chester seems to recognize something about the device after opening it up, but lies when Captain Kramer notices him looking stunned.

As Barry and Deon move further into the CCC offices, they walk past screens with a headline about Trickster invading Tibet at some point where Vanya is now the Editor-In-Chief of the Central City Citizen instead of Iris. This event was referred to in 806 as XS and Impulse read the records at the Flash Museum in 2049.

Deon turns on Barry and traps him in a part of the Still Force resembling Joe West's home.

It is revealed that the new XS is a reporter in 2049, like her mother, and she's writing a story about her latest solo adventure, saving a crowd at Shark Stadium while Impulse was busy partying.

XS uses her father's Gideon AI as a personal assistant.

XS becomes trapped in the Still Force as well after following Deon's voice.

Barry and XS find Iris' brush which disappeared from Joe's home during the final scene of 806.

Chester confirms that the device from the exploding half-way house is based on a design he put on-line as part of his streaming science show.

Chester references Allegra's warning in 811 that bad people might use his tech to do harm.

Allegra points out that someone called in a warning to evacuate the halfway house, suggesting that what happened was an accident rather than a planned terrorist attack.

XS tells Barry that she's a writer rather than a CSI, like the original Nora from Season 5.

Barry tells XS that he's proud of her regardless of what her job is.

Nora's speech about the connections between their family causes him to remember that he has a small connection to the Still Force, which he should be able to use to escape.

Barry and Nora appear to Joe as green-tinted ghosts at his home in 2022 as Barry connects to the Still Force.

Barry says he has visions of Cisco and Frost from the past, and also sees future visions of Bart's children and XS's wife. He also sees someone he seemingly recognizes and forgets named Max.

Barry and Nora are able to escape the Still Force and emerge in Central City in 2022, because Barry figured out he must somehow escape if Nora was still alive. This also causes him to belief that Iris must be okay and will turn up eventually, given that his children are okay in the future.

Barry loses his connection to the Still Force and still has no idea why Deon turned on him.

Chester identifies the bomber as one of his followers, Wookielover77, who worked as a volunteer at the halfway house and was trying to fit the water heater with a clean power source. Unfortunately, he wasn't quite good enough to install the device safely.

Someone hacks Chester's computer and starts downloading his designs remotely after he leaves his lab with Allegra.

Chillblaine changes his mind and agrees to help Caitlin bring Frost back to life.

Wally West taught Barry how to meditate to access the various forces besides the Still Force at some point in the past.

Wally also teaches Bart how to create constructs made of lightning in the future.

Somehow manages to feel packed with filler while being completely underwritten.