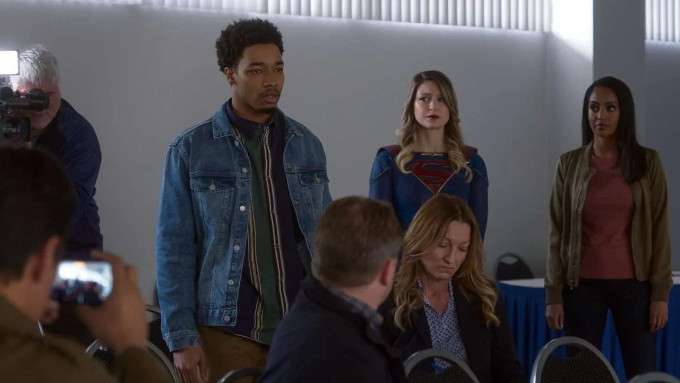 Supergirl steps in when a building set aside for low income housing is suddenly sold off to a large corporation as part of an effort to gentrify National City. Unfortunately, Nyxly shows up to complicate matters even further. Meanwhile, as Nia trains with her mother, Alex begins training Kelly to become the new Guardian.

Various Superman and Supergirl comics dealing with real world issues, with an emphasis on journalists doing good rather than superheroes punching people.

Jesse Rath's green make-up as Brainiac-5 looks off, though that could be intentional as to make him look more off-kilter during the cheesy PSA.

Again, the best part of the episode is Nicole Maines playing Nia's torment at the evils she has committed even as her mother tries to help her while holding her accountable. Thankfully, it's much better developed this week than last week.

The title comes from a poem by Maya Angelou.

Nyxly is able to temporarily resurrect the dead for one day. However, due to the way she works the spell, Nia is trapped in a pocket dimension centered around her apartment for the duration (i.e. one day) and cannot communicate with anyone outside that space during that time. Additionally, the spell will cause anyone who might notice Nia's absence or try to contact her to forget about her.

Brainiac-5 claims to have 86% more energy since abandoning junk food for green vegetables.

The people of Edifar are known for their building capabilities and technological advances.

Brainiac-5 says that the odds of a criminal like Mitch returning to crime after being released are 2:5.

A cryo-nuclear bomb is powerful enough to freeze everything in a one-mile radius and can even kill a Kryptonian.

Nia's Mother: There's an ancient story... About a woman who slandered her friend. The woman went to her rabbi, full of remorse. The rabbi told her to cut up a feather pillow and to scatter the feathers into the wind. He then instructed her to go out and collect every single feather. She cried, "That was impossible!" And the rabbi replied, "No more impossible than to completely undo the wrongs of your actions." You made a dark bargain, Nia. You unleashed Nyxly on this world. And the actions she will inflict will be like those feathers.
Nia: So what should I do?
Nia's Mother: This is not about doing, Nia. Just like your dreams, the ravens, your sister, you cannot run away from this. You must have the courage to sit with the pain to take in the gravity of what you've done.

Orlando: Councilwoman, you don't know me. But I'm one of your constituents. My name is Orlando Davis. I spent the last two years at Van Kull Prison, and was one of the people counting on housing in the Ormfell. I've lived in National City my entire life with my little brother Joey. We lost our parents when I was 14. I quit school to take care of my brother. But there isn't a big market out there for dropouts, so the bills piled up. I made a stupid mistake and I've been paying the price ever since. But I'm not the only one who's paid it. See, I remember what it felt like to go to bed at night with my family nearby. To feel safe. To feel loved. But Joey doesn't. He's been in and out of the system his entire life, and I am so scared that he's gonna make the same mistakes that I have and I can't even be there to help him. Because what he needs is a home. He is not the only one. So, I'm here today to ask you one thing. See us. All the people hoping to live in this building, when you're deciding whether to vote for this deal... you're voting on our lives, on our families. On my chance to give my brother some hope. So, please... see us.

Brainiac-5: The fight for systemic chance often feels never-ending. All we can do is keep showing up

Nia brings Nyxly into the real world, from the dream realm.

Nyxly agrees to honor her deal with Nia, but notes that her power will be sapped for a bit afterward.

Nyxly says she has other business on Earth before she returns home.

Nia's mother says that she has always been with Nia in her dreams, but that she's ignored her wisdom. This confirms that Nia's mother was the owl in 609.

Brainiac-5 and Supergirl agree to film a cheesy PSA that encourages healthy eating habits in children.

Kara has second thoughts after seeing the PSA, but Brainy tells her the ad went live on Catco's website 20 minutes earlier and has already gained 800,000 views.

Kara makes reference to how Alex made her train under Kryptonite energy emitters during Season 1.

Kelly gets a call from Orlando Davis and learns that his efforts to secure an apartment for himself and his brother fell through.

Supergirl checks up on Orlando and confirms that he was up for an apartment in a complex, the Ormfell, which was being set aside as affordable housing for reformed convicts, before being sold to Orquoia (the largest cloud computing company in the world) by the city.

Orlando is currently crashing on a friend's couch - the same friend responsible for him going to prison in the first place.

Mitch, the sidekick of Naxim Tork in 606, is revealed to be on Earth, disguised as a human and at liberty.

Mitch abducts Nyxly with the intention of adding her to his menagerie and trying to get Naxim Tork to go back into business with him.

Nyxly lies and says she's powerless and condemned to walk the Earth as a powerless mortal.

Mitch has a collection of Supergirl headlines posted around the inside of his ship. This leads Nyxly to suggest Mitch abduct her instead and she offers her help to do so.

Nyxly says she has a plan but it requires an expert engineer. Mitch says he can abduct one.

Councilwoman Jean Rankin is behind the deal that sold the Ormfell Building to Orquoia.

William says that most people in The Heights (the poor neighorhood where the Ormfell is located) are in favor of the deal because of the jobs it will bring in.

Andrea suggests having Supergirl do a Q&A on the CatCo website rather than do a simple interview about the Orquoia deal.

Nia once again dreams about ravens and a cage made of ice, but has no idea what it means.

Nia's mother says that you should never exit a dream in fear and that everything in a dream has a meaning.

Ravens are symbolic of wisdom and misfortune in dreams.

Nia dreams of the dollhouse she had when she was young.  She then sees her sister in the window and concludes the ravens symbolize her sister, Maeve, who last appeared in 411.

Kara leaves her Q&A after only two questions, after hearing Dr. Raab calling for help. This does not help her case, as the last woman to speak called her a hypocrite for telling people how bad things are just as things are improving after all her talk of having hope.

Desmond Raab is from the planet Edifar.

Kara recalls Mitch from the events of 605 and 606 and wonders how he is loose on Earth.

According to the DEO files, Mitch and Naxim Tork were released sometime before the DEO was destroyed and Naxim left Earth sometime in 2020.

Mitch has been in and out of the county jail several times since released, with one charge of breaking-and-entering and a few petty thefts.

Nia has a dream where her sister asks her for her light but it burns her to ashes.

Nia concludes the dream is telling her she needs to come to peace with her estranged sister.

Kara meets with Councilwoman Jean Rankin as Supergirl, but she's unsympathetic to the idea that her deal is going to hurt people and points to the billions the city will make and all the people who will be employed.

Kara talks to two other council members but they're also on-board with Rankin.

Kelly is upset because she can't master the move Alex tried to teach her. Kara points out that she was still able to take Alex down in a fight using what she made up herself.

Kara realizes that the PSA is working because Brainy's story about fighting a junk food addiction resonates with people and that for all her celebrity, she lacks that personal touch. This leads her and Kelly to get Orlando to speak that the council vote on the measure.

Nia's mother tells her a parable about coping with guilt and advises her to trust her dreams before disappearing.

Orlando speaks to board about how he quit school and became a criminal to take care of his brother.

The cryo-nuclear-bomb is encased in lead so Supergirl can't look at it as she's using her heat vision to neutralize it.

Kelly saves Councilwoman Rankin from being hit by shrapnel using a bulletin board as an improvised shield.

Alex complements Kelly for being adaptable rather than trying to copy everything she does.

Nia asks for a truce in her dream vision and the ice cage cracks.

Kara heads back to the Ormfell building after the Watchtower instruments detect an energy signature.

Nyxly confronts Kara, revealing that the lead also encased a device that would restore her power if it were supercharged with heat-vision.

Nyxly freezes Kara and says she is going to destroy everything Kara cares about before returning to the 5th Dimension to do the same to her father, starting with the Ormfell Building.

Kara calls Mxyzptlk for help and he appears in the final scene.

Kara and Alex's surprise that Naxim Tork and Mitch survived the destruction of the DEO suggests that many of its prisoners were not evacuated in time and died when the building was destroyed by Leviathan.

Preachy and lackluster, in a nutshell. While the show is to be credited for not pretending all Orlando and Joey's problems can be solved in a single episode and his speech to the city council is a good one, it still feels like this episode started with that speech and was reverse engineered as an excuse to bring in superheroes around it rather than starting with the superheroes and finding a way to tell a story with them that is culturally relevant. It doesn't help matters that Kara tries to sympathize with Mitch, despite the character deserving no sympathy and not even managing to be as amusing as his hammy partner.