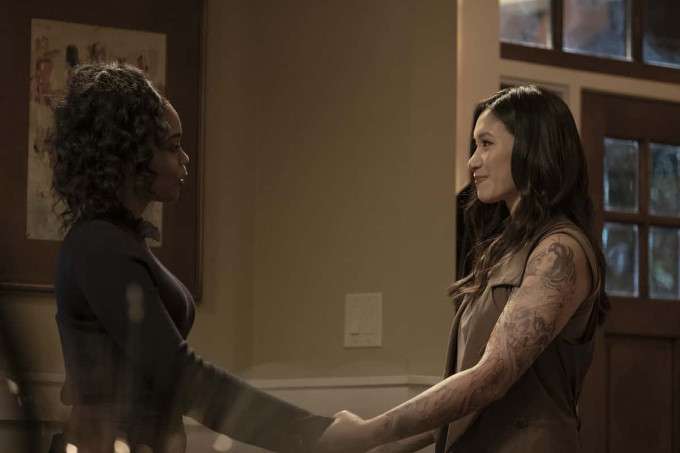 The newlyweds are home from their honeymoon and Grace is officially welcomed into the Pierce Family. Unfortunately, the event is marred by the sudden arrival of a team of FBI agents and the news that Jefferson is under investigation for embezzling money from Garfield High. As they work to prove his innocence, Tobias steps up his campaign for mayor, Ishmael begins his hunt the heroes of Freeland and Jennifer prepares for her first day of school as JJ Stewart.

Gambi believes he can use Promethium to make costumes that will protect the team from DEG blasts.

Anissa learns that while she was gone the hospital entered into a partnership with Monovista and that their medical division found a way to safely isolate chromosomes and fully remove the CFTR gene mutation.

In the latest test for the Promethium Energy Field Emitter, the radiance is extended to 55 miles.

As Ishmael is listening to the police band, a 10-57 is reported. This is the code for a firearm being discharged.

(Jennifer is inspecting her ransacked room with Anissa.)
Jennifer: So hard not to light them up. Having to stand there and let them completely destroy my room.
Anissa: That's why we work on restraint. It doesn't come naturally.
Jennifer: Nothing comes natural anymore. Even dealing with the face I have to walk around in.

(Tobias is going over his immediate plans with Val and Red.)
Val: One more thing, sir. Dr. Stewart? Her role in your plan is as crucial as any, and we haven't heard anything from her. Are you sure she's on track?
Tobias: What you don't know about Dr. Stewart is, her finest quality when it comes to her work is she leaves no stone unturned. And we're using that attribute against her. The best part is... she has no idea.

Grace and Anissa return home to Freeland and a surprise party.

Anissa reveals she called ahead and told her parents about their marriage over the phone.

Grace is welcomed into the Pierce Family.

A SWAT Team, led by Special Agent Kevin Mason, arrives in the middle of the party with a warrant to search the house.

Jefferson discovers that he's been accused of embezzlement and his personal finances have been frozen by the government.

Lynn confirms that she is still trying to figure out Val Seong's power.

Jefferson apologizes for pushing Lynn to test the meta-booster made from Val's genes on herself in 406. She accepts the apology.

Jennifer is returning to Garfield High under the alias JJ Stewart - an Army brat, Jennifer Pierce's cousin on her mother's side, she wanted to finish school in the States so the Pierces offered to let her stay with them while she finished school.

Tobias was given the body-cam footage of the SWAT officers who searched the Pierce house so he could amuse himself watching Black Lightning's house be trashed by the police.

Red suggests that he talk to Marshall Bates - the CEO of Monovista - and encourage him to speed up the delivery of their new weapons. Tobias agrees.

Val asks about why Tobias isn't rushing the part of the plan involving Lynn Stewart. Tobias says that things are on track and that he doesn't need to do anything but wait in regards to her.

TC is nursing an obvious crush on Jennifer and shows up to escort her to school on her first day.

Gambi is plotting to steal a stockpile of Promethium to make DEG-proof suits for the team.

Lynn asks Gambi to test the meta-booster she made with Val Seong's DNA. He agrees, but he doesn't feel anything when he takes it.

Jefferson meets with Marcel Payton - the teacher to whom he started renting his father's home in 403.

Marcel gives him an eviction notice and notes that everyone in the neighborhood got one. He and his children are okay, however, thanks to Tobias Whale insisting on paying for all the families being displaced by his new hospital to be set up in new homes.

Jennifer tells TC she hasn't felt any different since her transformation.

A student named Montel leads a protest against Jefferson Pierce.

Montel is told off by another student named Uriah.

Jennifer thanks Uriah for what he did and introduces herself as JJ, Jennifer's cousin.

Jennifer and Uriah are in the same band class.

Jefferson tries to contest the sale of his father's house, but is run through a loop on the phone.

Jennifer calls Jefferson "Daddy" for the first time in years.

Jennifer lies and tells Jefferson that kids were protesting for him at school.

Anissa has a consultation with an old friend named Kiki, who is seeing a man named Marvin and is  17 weeks pregnant.

Kiki says one of the genetic tests for her baby came back abnormal, showing that the baby had DNA markers for cystic fibrosis, but she was told that could be fixed with a single outpatient procedure.

The energy field emitter has its first successful trial, generating energy in a 55 mile radius.

Gambi triggers a false alarm so that he can steal a tank of Promethium from Lauren's lab.

Ishmael kills a member of the Freeland Resistance trying to learn where to find Blackbird.

Jennifer vents to Grace about the protests against her dad and tells her about Uriah.

Grace says that shapeshifters tend to be good at reading body language and she could tell Jennifer was upset and that she had a crush on Uriah based on how she moved when she talked about them.

Tobias gives a speech and brings Marcel Payton out to talk about him being the sort of person he intends to help as mayor.

TC traces the records which seem to show Jefferson embezzling school funds. They amount to 12 transfers from the education fund into the trusts Jefferson set up for his daughters. They are direct deposits with no middle man.

TC suddenly loses his powers and can't talk to the computers anymore. Eventually they realize that his power outages coincided with Gambi entering the room and standing next to him. This is confirmed when Jefferson is unable to "light-up" next to Gambi.

This leads to the revelation that Val Seong is a nullifier- a metahuman whose power is cancelling out the powers of other metahumans.

Freeland High School scraps its music program two days after Jennifer got into the band class.

Jennifer tells Uriah she has an idea on how to raise the money to fund the band program.

Lynn's latest test of Jennifer's physiognomy suggests that she's unstable. She calls Jefferson to tell him about this, but suddenly changes her mind and says she called to tell him she'd be working late.

Anissa and Grace break into Monovista to get the files on Kiki's procedure and are ambushed by Ishmael.

Ishmael is able to wound Anissa's thigh, but is forced to flee when Grace changes into her leopard form. He apparently had no idea Grace was a shape-shifter based on his intel.

Gambi uses a satellite to scan for extreme magnetic energy signatures. This enables him to track Red when he's using his powers against the CEO of Monovista.

Red beats Mr. Bates with a golf club before bending it around his neck and threatening him.

It is revealed that Lauren was developing the Energy Field Emitter for Tobias Whale.

Mr. Bates says the Emitter will be ready. They just needed a few more days for final testing.
Red gives Bates 48 hours to deliver and threatens him with a bullet.

Jefferson says this confirms that Red is the one who killed Mayor Black.

TC is in communication with Khalil and Philky, who are about to try a new procedure to deactivate Painkiller's kill-order against The Pierces.

TC tells Khalil about how Jennifer is doing.

Khalil offers to help investigate how Tobias framed Jefferson, having some inside knowledge of how Tobias handles his finances.

Gambi doesn't know much about Ishmael beyond his name.

An enjoyable episode, heavy on plot and light on action, but the stage is being set well for one Grand Guignol.
Posted by Starman at 12:15 AM