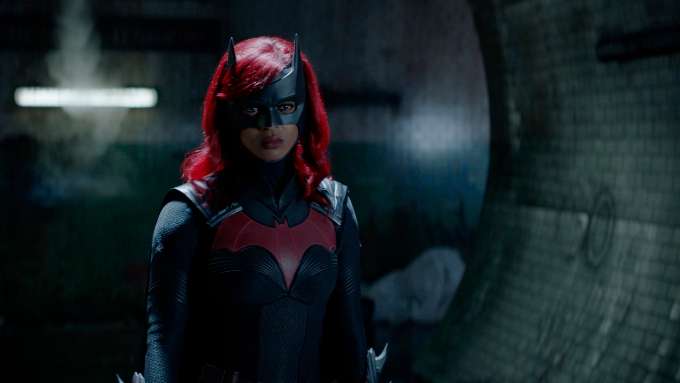 Plot
Kate Kane is missing after her plane experienced a technical failure while landing. As Kate's friends and family begin searching for her, Alice and Hush have a falling out over their respective plans. Meanwhile, the Batsuit finds its way into the hands of an unlikely hero; a woman named Ryan Wilder, who may become the hero Gotham City needs in its time of need.
Influences
Joker (the scene with Ryan meeting her parole officer resembles Arthur meeting his social worker.) Also, while not directly based on any particular comic, there are a number of stories based around the idea of an unlikely pupil taking over Batman's role. These include Batman: Prodigal, Grant Morrison's Batman and Robin, Batman: Knightfall and the series Batman Beyond
Goofs
Why would Kate Kane fly out to visit Kara Danvers? Couldn't she just call her? If not, wouldn't it be faster for Kara to fly to her? (Kate's the sort of person to do business face-to-face and it's far easier for her to get away from her day job unnoticed than Kara.)
Wayne Manor seems remarkably well kept for having been abandoned for four years. (Perhaps Luke has been paying for maid service since Alfred left?)
Performances
Javica Leslie doesn't get much time to introduce Ryan Wilder in this episode, but she makes the most of what little time she has and the fact that she's having to play against herself for most of the episode. Still, she immediately manages to establish Ryan as a much different person than Kate, both in and out of costume.
Rachel Skarsten is entertaining as always, but she outdoes herself with the scene where a drunken Alice shows up at Wayne Manor in mourning clothes and starts reading Hush the riot act for not following her plan, even while acknowledging how utterly pointless it is with Kate Kane now dead.
Dougray Scott gets a great moment of silent acting in the final moments of the episode, as he turns on the Bat Signal and starts to cry silently, his face still stoic but his eyes showing his pain.
Artistry
The opening sequence in which the plane crashes over Gotham is thrilling and the pacing is a fantastic display of Ryan's skills, showing us who she is without having to tell us that she's brave enough to go into a dangerous situation and kind enough to try and help others, though still not use to tense situations.
The closing montage of all the cast reacting to the news that Kate is likely dead is a powerful moment, well-shot and well-acted.
Bat Trivia
The gang members Ryan questions for information in her first outing as Batwoman are members of the False Face Society. This is a gang with a rather notable history in the comics, though it is unaffiliated with the Golden Age Batman villain False Face, who was a master of disguise.