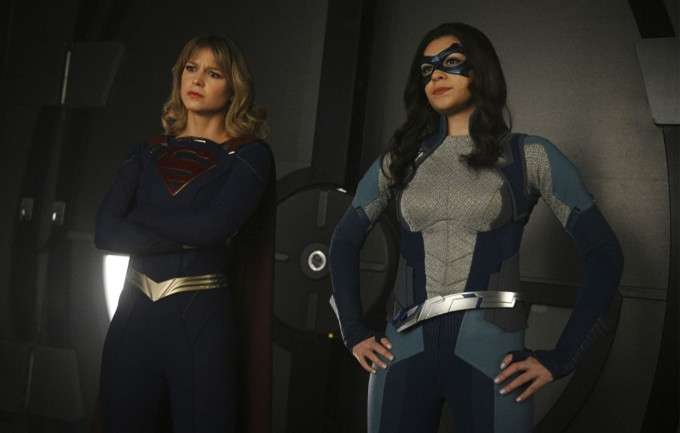 Plot
Rama Khan returns to fight Supergirl and her friends, as Lena and Lex are forced to team up when they're both trapped in the prison housing Lena's experiments and Project Non Nocere fails.
Influences
The JLA Comics of Joe Kelly (Rama Khan and Gamemnae)
Goofs
While it would make sense for Kara to be somewhat apprehensive of Lena's intentions after the last episode, it still seems drastically out of character for Kara to be utterly certain Lena is involved with Leviathan while the usually cynical and paranoid Alex pleads for her to not jump to conclusions.
While this is likely due, in part, to Melissa Beonist's pregnancy limiting what she can do in terms of stunt work and action scenes, it's odd how this episode (and, indeed, most of the second half of season 5) have had Lex Luthor doing more to fight Leviathan than Supergirl and William Dey doing more to investigate Leviathan than Kara.
On that note, it's weird that out of all the people who could help Alex realize how much leaving the DEO has hurt her sense of self, all the heavy lifting is done by a special guest start who figures out what Alex's problem is after knowing her for the span of one afternoon.

It had been previous established that Rama Khan's powers were tied to the Earth and that he couldn't effect alien materials, which is why he could not sense what happened inside the Fortress of Solitude as it was made of Kryptonian crystal. Why then is he able to move Kryptonite around like it was Earth-based mineral? (Perhaps his powers are different in the Post-Crisis reality or the staff allows him to move them indirectly by using the magnetic properties of the Earth?)
Performances
Sean Astin is quite frankly wasted in the role of Pete Andrews.
Katie McGrath slays in this episode and her interactions with Jon Cryer as Lex and Melissa Benoist as Kara in the closing moments of the show are perfect.
Technobabble
Lena determined that the failure of Non Nocere had nothing to do with Myriad being activated.

The irises of a failed Non Nocere patient become inky. When Lena learns from Steve that the other inmate was hurt by the wild patient before his eyes turned, she theorizes that the natural survival instinct clashed with the programming to do no harm, resulting in his survival instincts kicking into overdrive to adapt to the new program when he sensed danger. When the wild patient turned, he became a predator, triggering the survival instincts in the other inmates, thus sparking the riot.
Protocol 5 is the emergency evacuation plan for DEO Headquarters.

Lex stole something from the Fortress of Solitude, which he intends to give Leviathan to work his way into their good graces so that he can get on board their ship.
Brainiac-5 again asserts that he has a 12th Level Intellect, when he tells Lex that he figured out he was responsible for the Sun Eater escaping.

The previous Leviathan base and elevator with Braniac-5 discovered is no longer there.
Miss Martian is staying on Earth to aid in the battle with Leviathan.
J'onn is busy scanning for signs of Leviathan activity within a 300 mile radius of National City when Dreamer, Miss Martian, Alex and Supergirl hold a tactics meeting.
Supergirl is convinced that Lena is working with Leviathan. Alex says there is no proof of that.

Alex goes to meet with a friend of Kelly's, who is now an archivist with the Library of Congress and an expert in semiotics and iconography. This is later revealed to be Pete Andrews, the former soldier from 503.
Dreamer says she will see if she can foresee some clue as to where Leviathan's base is.
Lex goes to check on Lena as she's working on fixing Non Nocere.
Steve Lomeli's attitude regarding Lex Luthor has changed in the Post-Crisis reality. He considers it an honor to meet him, as he wasn't in the same cell-block with Lex in this reality, as he was in 418.
Obsidian North announces a Worldwide Unity Festival to celebrate the release of Obsidian Platinum.

Margot the Leviathan agent's full name is revealed to be Margot Morrison.

Kelly tries to convince Andrea Rojas to delay Obsidian North's launch. She refuses to consider it unless there is definitive proof the software is harmful.
Pete Andrews is a fan of Kara's writing and says her language use suggests a mastery of languages other than English. When he asks if she's traveled extensively, Kara lies and says she was born and raised in Midvale.

Pete Andrews says he's heard whispers of Leviathan's existence, but nothing definite.
Gamenae gives Rama Khan the item Lex Luthor stole from the Fortress of Solitude. The item is later revealed to be the Staff of the Shadow Realm from 508.

Pete says that the symbol of Leviathan appeared in a series of crop circles in Greece in 1752 weeks before a plague of locusts took out the entire region. Similar symbols appeared in 567 A.D in Macedonia and in 1134 A.D, Bavaria just before disasters.
Kara leaves to meet with William Dey after he calls her, saying he found something odd about Margot's manifesto video.

Pete tries to gain access to a special collections room, but his request is denied - he thinks because he specifically asked to research Leviathan.

A riot breaks out in the prison, as more prisoners have their survival instincts overcome their programming no to harm others.

William determines that "Margot" in the video is someone wearing an image inducer pretending to be Margot.

Kara suggests they check Obsidian North's personnel files, as Margot apparently worked for them.
Malefic has begun to broker a peace between the two White Martian factions on Mars, according to Miss Martian.
A growing romance between Miss Martian and J'onn is hinted at as they catch up.
Dreamer has a vision of Brainiac-5 laughing while playing with a deck of cards, where Rama Khan holding a staff takes the place of all the face cards. She takes this to mean that Brainy is playing games with Rama Khan. The emblem on the back of the cards is the symbol of the Oregon Geological Monitoring Station.
William claims to have gotten a private recipe from Chef Emeril Lagasse.
William discoveres that Margot Morrison spent a lot of time talking to an employee with the badge number 873.
Kara excuses herself from working with William to go find Alex's missing cat.
William offers to come help, claiming that cats love him. Kara says that the cat gets skittish around tall men with accents.

Lena, Lex and Steve work their way through the riot to Lena's office, where she can reset everyone with a burst of Q-waves.
Brainiac-5 takes Rama Khan into DEO custody, refusing to let Kara or Dreamer question him first.
Alex and Pete try to sneak into the special collections room during the 5 pm guard shift-change. They are shot at by a mysterious assailant, who chases them into the parking garage.
Dreamer says something about Rama Khan's staff gives her bad vibes.
Brainiac-5 says he will let Supergirl and Dreamer watch his interrogation of Rama Khan, but he has determined that he has an 85% better chance of successfully talking to him without them in the room.
Dreamer tells Supergirl about her vision of Brainiac-5 but how now she thinks it meant that Brainiac-5 was using Rama Khan somehow.
Pete calls his wife to make sure she is okay. He tells Alex that someone is watching their house and that they are going to go off the grid for a bid.
Peter tells Alex that she sounds like a lot of people he knows who still think they are in the military even after leaving and that she had better find a new identity for herself.
Obsidian North employee 873 is revealed to be Eve Teschmacher. The name means nothing to William, but Kelley Olsen knows who she was on Earth-38.
Brainiac-5 knows how to speak Jarhanpurian - the language of the aliens running Leviathan.
Brainiac-5 tells Rama Khan that he knows about his partnership with Luthor and that he has a similar arrangement. The only thing Supergirl and Dreamer understand of the conversation, however, is the name "Luthor."
Dreamer senses that Rama Khan's staff is scanning the DEO for something, as Rama Khan reveals he allowed himself to be captured.
Rama Khan retrieves his staff and begins causing an tremor that destroys the building, as he summons all the Kryptonite in the DEO to him.
Lena is able to reset Project Non Nocere, but while it knocks out the aggressive inmates, it also causes Steve to lose the sense of peace he had gained.
J'onn and M'Gann arrive in time to save everyone, with M'Gann getting knocked out trying to distract Rama Khan and being phased out along with Kara by J'onn, after he freed Brainiac-5 from under a pile of rubble.  Brainiac-5, in turn, was able to fly to safety while carrying Dreamer.
The DEO Headquarters is destroyed as Rama Khan escapes with the Kryptonite.
Dreamer tells Brainiac-5 she knows he is working with Luthor and that she no longer trusts him.
William and Kelly go to Andrea Rojas with everything they discovered about Eve Tesmacher working under a number of aliases. However, given that Eve was hired on Gemma Cooper's recommendation  and doesn't have a criminal record or so much as a single supervisor complaint, she dismisses their concerns outright and threatens to have them fired if they do anything else that threatens to disrupt the launch of Obsidian Platinum.
Lena decides that Non Nocere was a bad idea because pain is a necessary part of the human experience.

Lex says that he tried to support Lena and hoped she could find a way to make it work, but he believes that humanity can't be changed - they can only be controlled. And the hand that does the controlling must he a human and, ideally, a Luthor.
Lena cuts ties with Lex again.
J'onn sends Kara home, as she laments that without a Kryptonite-proof suit like what she had on the old Earth, she's useless in a fight against Rama Khan now.
M'Gann kisses J'onn, confirming their romance.
Alex returns home and tells Kelly that Pete has gone into hiding

Alex says that she isn't used to being exposed and she's even more freaked out withe the DEO being gone, even though she quit there months ago.

Kelly tells Alex about Eve Tesmacher working for Obsidian North but that Andrea won't do anything.
Kelly suggests that Alex consider becoming a vigilante in a costume with a mask, saying that is she is going to work with superheroes, she may as well go all the way.

Lex blows up the prison
Gemma Cooper calls Lex and says she'll send a car for him in the morning so he can meet her friends.
Lex meets with Brainiac-5 and reveals that everything is going according to plan and that he had counted on Brainiac-5 disobeying his orders and helping the Super-Friends. He also tells him that he is finally getting invited into Leviathan's home base.
William tries to follow Eve Tesmacher, but is jumped following her down an alley.
Lena goes to Kara, tells her that she thinks Lex is working with Leviathan and that she wants to help her stop him.

Location
The Oregon Geological Monitoring Station
The Bottom Line
Largely forgettable despite the major revelation of the DEO HQ being destroyed after four years of being a major set-piece. And yet the final ten minutes do much to redeem the shoddy script and continuity problems. While Kara is awfully out of character, Lena's speeches make up for a lot.
Posted by Starman at 7:36 AM