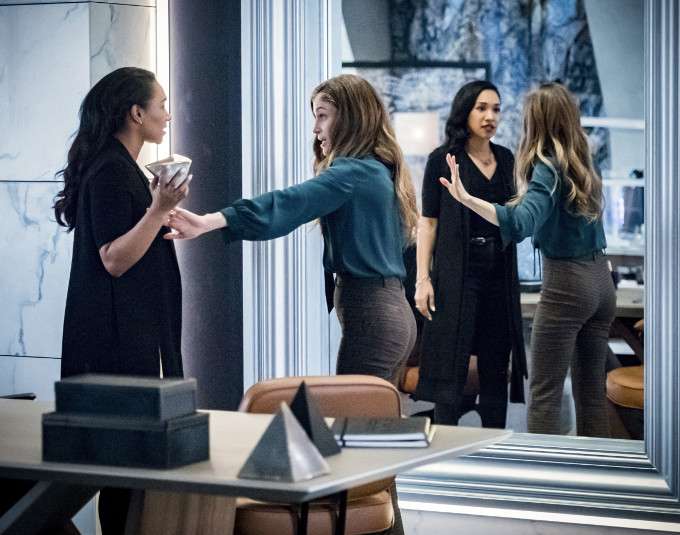 Eva McCulloch makes her move and attempts to escape the Mirror Universe, as Barry begins to realize there's something wrong with Iris. But will the rest of Team Flash believe him? Meanwhile, Ralph and Cisco have to act fast to save Frost and Caitlin.


Influences
Doctor Who: Doomsday (the final scene with Barry and Iris pretty much cribs The Doctor and Rose's separation) and every science fiction story based around robots or aliens replacing someone with a duplicate and only one loved one noticing.


Goofs
How does the Iris clone know that Barry's speed has been draining non-stop over the past week when she hasn't seen him in one week?

Why does Barry set up his presentation in Joe and Cecile's living room?  Why not one of the empty spaces at STAR Labs where he can safely say the Iris clone probably won't  be going?
It strains disbelief that Barry took this long to realize his wife had been replaced, but Bloodwork realizes something is up in less than a minute.
Artistry
The SFX team outdid themselves with the effects for the broken mirror shards and Iris's razor arms.
Technobabble
Barry says the prismatic filter on Kamilla's camera was somehow able to capture a dimensional shift: things that don't belong in this world.

Barry builds a prismatic scanner that is just a more powerful version of the camera filter.
Nash says that it's possible McCulloch Technologies' reflective-chip technology could create a mirror duplicate when Cecile suggests the possibility.
Cisco uses Ralph as an improvised set of jumper cables, due to a lack of ionized conductive wiring, to jump-start Caitlin's body.
Mirror duplicates are said to be faster and stronger than the people they are made to resemble.
Bloodwork is held within a special bio-degenerative containment matrix with triplicate back-up protocols, far more advanced than the metahuman holding cells at Iron Heights.
With Bloodwork's blood rubbed on a mirror, Eva can activate the R-CEM in the Mirror World and zap her mirror. Together, this will reconfigure the molecular stability of the dimensional barrier that burns organic matter when it tries to pass from the Mirror World to the real world and allow her to return to reality.

Dialogue Triumphs
Ralph (seeing Caitlin is awakened from her ice coma) Oh, thank Elsa!
Continuity
Barry, Ralph and Cisco try to activate the artificial Speed Force.  It does not work.
It has been one week since Barry last saw Iris (really the Iris copy) and he refuses to see her when Cecile suggests he come visit her at the Central City Citizen offices.
The Central City Citizen's offices are located on Matz Street.
Eva McCulloch informs the Kamilla and Iris clones that she will be making her move to escape the Mirror World that night.
The Iris clone refers to 518 and how Barry returned Nora West-Allen to her time without consulting Iris first.
The Iris clone tells Cecile she isn't sure how she feels and asks her to read her with her powers. Cecile says that she feels sad and concerned.
When asked about her and Barry, the Iris clone says that she needs to focus on herself right now, after some prompting by the Kamilla clone.
Cecile returns to her and Joe's house to find Barry has barricaded himself into her living room and set up a series of white boards with evidence boxes to prove that Iris isn't Iris.
Barry has determined that the Iris clone is not a doppelganger since those don't exist anymore. He hasn't ruled out her being a shape-shifter or a Plastoid.
According to Barry, Cisco's binder of metahuman supervillains confirmed that the shape-shifter Everyman (last seen in 119) is alive on Earth-Prime.
Barry makes reference to the Plastoids, who were mentioned by Breacher in 404.
Barry also considers the possibility that the fake Iris might be a Martian, but dismisses that as if she were a Martian, J'onn J'onzz would have sensed her presence and alerted him.
Barry tracked Iris' phone to McCullouch Technologies on the night she disappeared.

Barry spent the last week gathering evidence that Iris was a fake.
When explaining why he thinks Iris was replaced with a duplicate, Barry cites her suddenly being able to cook good pancakes, hitting a bar bouncer over the head with a bottle and speaking fluent Italian (611) along with her kicking him out.
Caitlin and Frost's apartment number is 301.
Ralph brings Frost a plush polar bear as a get-well-soon present. Cisco brings a portal bi-lab so she can start catching up on her work.
Cisco and Ralph find Caitlin in a semi-frozen state, having apparently put herself into an ice coma as her ice-healing powers stopped working, effectively entering a state of cryogenic hibernation.
Iris suggests breaking the mirror Eva can control and dissecting it. Eva stops her and then storms off to work in her lab.

Iris examines the mirror and finds a button leading to a secret room behind the mirror.
Barry hacks Iris' computer at the Central City Citizen and finds Kamilla's photo with a Prismatic Filter showing Iris to be something other than human from 614.
The Singh, Kamilla and Iris clones set mirrors up around Iris and Barry's apartment.
The clones refer to each other as brother and sisters and Eva McCulloch as Mother.
Eva needs one more thing to escape and it involves Bloodwork, who was last seen in 608.
Barry lures the Iris clone to STAR Labs, where Cecile and Nash are waiting. He accuses her of being from another dimension.
Iris turns on the computer in Eva's secret room and begins to experience headaches as it shows her images of her being brought into the Mirror Dimension and Eva's argument with Joseph Carver in 616.
Eva is shown to have been watching Iris when her source died in 610.
This prismatic scanner reveals nothing when it is focused on Iris.

Iris accuses Barry of being a fake, saying the real Barry would have tried harder to come home to her.
When the scanner is focused on Barry, it shows him to be a mirror duplicate.
Cecile puts a pair of power-dampening cuffs on Barry and Nash locks him in a cell in the Pipeline.
Caitlin says her wound ruptured whens he tried to use her ice healing to fix it.

Caitlin says she thinks she's going to need her mother's help to fix herself.
It is revealed that Eva replaced Barry's prismatic scanner with mirror version of the same device which made Barry look like an mirror duplicate and the Iris duplicate look human.

The Singh Clone gets the Iris and Kamilla clones in to do an interview with Bloodwork.
Bloodwork determines that Iris isn't the real Iris right away, based on the fact that the real Iris would never offer to release him from his cell.
Bloodwork is familiar with Dr. Eva McCulloch and her work.
The Kamilla clone shorts out Bloodwork's cell  by throwing herself into the containment field. This causes a power failure.
Bloodwork says he senses that the Iris clone is almost human, maybe something more, and that she has a modicum of free will the other duplicates lack.
Bloodwork demands to know what the Iris clone wants. She says she wants to be alive. Bloodwork says she is worthy of it and gives him a sample of her blood.
Bloodwork elects to stay in his cell, saying there's more than one way for him to be free and that he's playing a long game.
Cecile lets Barry out of his cell, saying she can't explain why but she trusts Barry and his instincts.
The Iris clone shape-shifts her limbs into razor-glass shards and is able to stab Barry through the mirrors the duplicates arranged earlier.
When the mirrors are broken, the Iris clone is able to stab Barry through all the shards, leaving him bleeding and weak.
Iris is able to disable the Iris clone remotely by upsetting Eva, asking how long it took her to realize her husband had abandoned her. This causes the Iris clone to begin having headaches and gives Barry a chance to rally.
Barry says that the Iris clone had to have been made from part of Iris but that she could be her own person if she chose it.
The Iris clone tells Barry to find Iris and save her before she starts cracking into a pile of shards, saying she feels alive before she dies.
In the real world, Eva can control all mirror shards and teleport through them. She reflexively stabs Barry when he confronts her, but says he isn't much of a threat now.
Eva steps through the mirror and tells Barry to stay out of her way if he wants Iris and the others to live. She says she's keeping them in the Mirror dimension as insurance.
Eva says she has a whole world to liberate before she escapes.
The Boomerang Factor
Barry is made to look seven kinds of crazy just to sell the idea that he went nuts in thinking Iris is not Iris, so he is left all alone during the battle with Mirror Master.

The Bottom Line
Another weak episode. Barry is given the Idiot Ball while simultaneously figuring out what everyone else on the cast close to Iris already knew, but never mentioned to him. Cecile's powers prove totally useless during the one instance they should be incredibly useful. And just when you think it can't get any worse, Bloodwork comes back. Still, at least Eva is out of the mirror and the Iris clone is dead. Unfortunately, due to the shortened season, it seems unlikely we're going to see this pay off in a convincing way since there's only two episodes left this season and next week is a filler piece heralding the return of Godspeed. Meh.
Posted by Starman at 8:18 PM