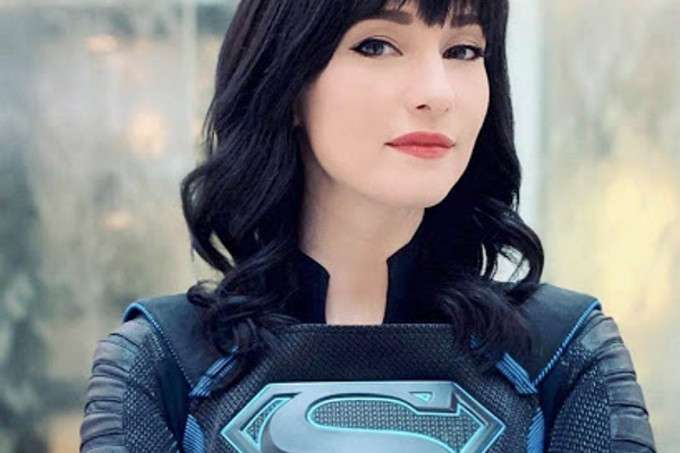 Unwilling to cope with her feelings in the face of her father's death, Alex retreats into Obsidian Platinum and begins to play out her dream of being her sister. As "Super Alex" gets drawn deeper into the augmented reality, Kelly and William begin to investigate Lex Luthor and Obsidian North's connection to Leviathan.

1990's VR science fiction, Alice in Wonderland (the title and the idea of losing touch with reality thanks to a fictional world.) the Indiana Jones movies (the character of Treasure Hunter Tilly) and Superman: The Movie ( Hank Henshaw's method of contacting Supergirl in Alex's dream world)

William continues to be the biggest creep imaginable, asking Kelly how Kara is doing in the wake of her father's death.

Granting that he's the villain in a VR simulation shaped by a mentally distressed Alex, David Harewood's overacting as Hank Henshaw remains as painful as ever to endure. It's almost as bad as Chyler Leigh's drunk acting.

A new low for William Dey's skills as an expert undercover journalist - he has his secret NSA contact saved in his phone as "Arnie - NSA."

Why is Eve Teschmacher being used as an agent to infiltrate Obsidian North? Unless something drastically changed in the rebooted reality, she should be in prison taking the blame for Lena's earlier attempts at world domination. It's unclear if she is working for Lex, Lena or Leviathan but it hardly matters as they should all be smart enough to remember that Eve worked for CatCo Worldwde Media in the same building for several years and stood a good chance of being recognized, even if she weren't a famous criminal at this point.

Why are Brainiac-5 and Dreamer sitting together at Jeremiah's funeral? Ignoring their own personal issues with being in close proximity to one another, neither of them knew Jeremiah and Brainiac-5 isn't the sort to go to a funeral purely to offer emotional support. Especially right now.

For that matter, why is there no other family or friends at the funeral apart from the regular cast? Surely Eliza had friends and work colleagues who would come to her husband's funeral?

Jeremiah Danvers is said to have suffered a heart attack while working in a refugee camp in Peru. This is believed to be a subtle stab against actor Dean Cain, who played Jeremiah Danvers and acquired some degree of infamy on Twitter after he made several remarks about South American refugees that many found racist and said were unworthy of an actor who once played Superman. Jeremiah's death by cardiac arrest may also be a reference to Dean Cain's apparent lack of a properly functioning heart.

In the VR world, Hank Henshaw delivers a message to Supergirl using an ultra-high frequency. This is the same method used by Lex Luthor to contact Superman in Superman: The Movie and Henshaw's line mimics but desn't quite copy Lex's line from the film about how Supergirl is "the only thing with less than four legs than can hear this transmission.."

Another Superman movie reference comes later, when Alex encounters another Supergirl player in the game and is confused. The NPC Brainiac-5 explains this as being a possible side-effect of Kryptonite poisoning. In Superman III, Superman split into good and evil versions of himself after being exposed to a synthetic form of Kryptonite.

Kara is barely in this episode, partly due to Melissa Beonist spending most of the episode's production time shadowing the director in anticipation of her first time directing the show. It is also expected that her screen time is being limited in light of her recent pregnancy.

Steph Song, the actress who plays the second Supergirl Alex meets in Obsidian Platinum, played the role of Roulette in Smallville.

Obsidian Platinum maps outward from the users brain, making the NPCs resemble people from their memories.

NPCs have three stripes on their neck.

Dracokardosian are a species of shape-shifting dragons.

With the right warhead, an short range ballistic missile has the capacity to wipe out everything in a 20 mile radius.

Kelly theorizes that Alex had a mild psychotic break due to her being more susceptible to the Obsidian Platinum AI while she was mourning.

Young Alex: (regarding Jeremiah) His life was a result of his choices. Not ours.

(A chime goes off on Kelly's computer.)
William: What is it? Did Lex do something?!

Honestly, every single line William has regarding how Lex MUST be responsible for something bad happening at Obsidian North, even though there is no evidence of that. If you do a shot every time William says Lex's name in this episode you'll be dead after the second commercial break.

The opening exterior shot reveals that Kara still lives on Hope Street on Earth-Prime, as was revealed in 406.

Jeremiah Danvers is said to have died of cardiac arrest. He had been working in an alien refugee camp in the Peruvian Andes, not too far from where he originally met J'onn.

Alex refuses to go to Jeremiah's funeral, saying that he's been dead to her for years and he did nothing to make amends to her. She also says that Kara's arrival changed everything and he became devoted to keeping Kara safe to the point that it destroyed his relationship with Alex.

William visits Kelly in her office and asks for her help in investigating Lex Luthor.

According to William, Lex has rushed 32 satellite launches by the FAA and put these satellites in orbit over directly over a cities he visited as part of his Obsidian Platinum promotion tour. As far as Kelly knows, this has nothing to do with Obsidian Platinum, which runs entirely off of wireless signals.

Kelly tells William about Richard Bates and how the only problem Obsidian Platinum has faced since Luthor got involved with it was his hacking the system in 515.

Kelly says she is watching the system for signs of Luthor's interference, but so far she doesn't think he's doing anything.

Alex meets another player in Obsidian Platinum  named Bonnie who has taken on the role of Treasure Hunter Tilly.

Bonnie says her sister Jill is a huge Supergirl fan, who was just diagnosed with Stage 4 cancer. She says she can't afford the flight to go see her.

Derek is a man whose wife just died who Bonnie thinks spends too much time in VR pretending to be a rock star.

Alex saves the concert crowd from a Dracokardosian - a dragon, like Spike from 509.

Derek is revealed to be one of the comatose patients in the ward watched over by Margot.

Kelly discovers that the hack Richard Bates exploited still hasn't been patched. The records show that the order was put in but the work funds hadn't been released yet.

Andrea says she will take care of the patch and that they don't need to issue a public warning.

Alex runs into Bonnie again at a dinner, where Alex is eating blueberry pancakes. These were revealed to be one of Alex's favorite dishes in 502.

Alex makes reference to going back to the real world and Bonnie is confused by what she means. She also doesn't understand when Alex asks her about Jill and insists her name is Tilly.

In Alex's dream world, J'onn is still the director of the DEO.

Margot is seen in the real world, leading a Leviathan team who pick up Bonnie from the trailer where she is in a comatose state.

Hank Henshaw appears in Alex's dream, having kidnapped Kara. He threatens to kill her and expose her secret identity unless Supergirl brings him a nuclear warhead for the missile he stole.

Kelly determines that Lex Luthor is now a member of the Board of Directors of Obsidian North.

Kelly gives William a list of almost 500 Obsidian Platinum users who have been playing the game for 48 hours straight or longer who nobody has called about.

William calls 100 of the people on the list and none of them are stuck in the game.

Kelly leaves to go check on Alex when she isn't answering her phone.

Another Supergirl player encounters Alex in the game. This time, it is Alex who is confused by her presence and the references to reality.

According to the other Supergirl player, Obsidian Platinum can't make alcoholic drinks cold enough without her using her her freezing breath.

When Alex asks about the second Supergirl, Brainiac-5 says it might be a side effect of Kryptonite poisoning.

Alex tries to leave the game and seems successful... until she gets a call from the NPC J'onn telling her that Psi is attacking the city and making everyone doubt that reality is real.

Kelly finds Alex trapped in Obsidian Platinum with her eyes glowing red instead of blue.

Alex is not responsive, even when injected with an Epi-Pen.

Kelly is able to shock Alex out of the game by adding a teenage version of Alex into the game who tells her that nothing they are seeing is real.

Alex tells Kelly about Bonnie and Derek and how they were stuck in the game too.

There are so many pre-orders for Obsidian Platinum in Madrid that the phone lines were shut down.

William has an NSA contact who tells him that of the 402 names from Kelly's list he checked out, 337 were VR geeks with no connection to Lex Luthor. The rest are all pinging from the same IP address, which is traced to 5532 3rd Street in National City.

Andrea tells one Obsidian North technician to start work on a patch for the fail safe error code immediately. The technician is revealed to be Eve Teschmacher.

William goes to 5532 3rd Street and finds nothing. This is due to Margot using some kind of camouflage technology that makes the room with the trapped Obsidian Platinum users look empty. She stands five feet in front of William and he does not see her.

Bonnie is confirmed to be among the victims in the ward.

The only thing William finds is a paper bracelet belonging to a hospital patient.

Alex and Kelly drive to Midvale in time for Jeremiah's funeral.

We don't get to see Super Alex battle Psi in the dream world.

The usually strong-willed Alex has her IQ lowered by about 50 points to render her susceptible to video game addiction.

William tells Kelly - the psychiatrist who specializes in handling PTSD patients - how she should handle her grief-stricken girlfriend. For he is Captain Mansplaining!

A painful bit of filler that serves no real purpose other then ensuring that we'll never have any reason to expect to see Dean Cain guest star on this show ever again. Alex is turned into a drunken jackass for the sake of a plot point and most of the cast is sidelined playing augmented reality versions of themselves for most of the episode so that we can watch William and Kelly - easily the two most annoying characters on the show - be big damn heroes by making phone calls. An immediate contender for the worst Supergirl episode ever.
Posted by Starman at 10:33 PM