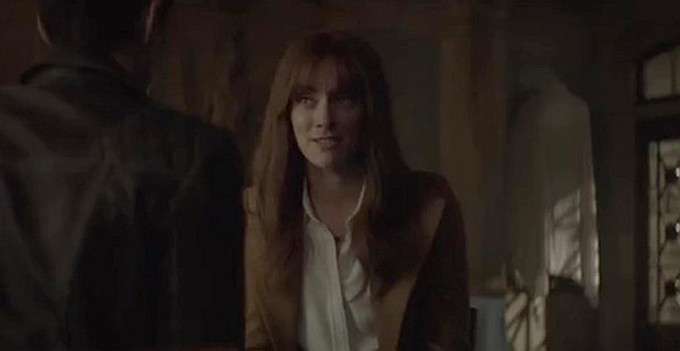 With a version of Beth Kane who never became Alice now somehow living on Earth-Prime, Kate feels like her birthday wish for her sister to someday become sane has come true. Unfortunately, while Alice is still in the custody of The Crows, Mouse is still on the loose and has a plan to free her.

Again, Rachel Skarsten steals the show as both Alice AND Kate.

There is no "Previously on Batwoman." introduction to this episode, with the opening stinger repeating the final scene from 110 instead.

Luke dusts for prints on Beth's bag. They are a match for Alice.

Beth has written a 300 page dissertation on theoretical extragalactic astrophysics and cosmology.

Sophie ran Alice's copy of Alice in Wonderland through an X-ray scanner, a thermal imager and an ion mobility spectrometer.

Kate: Beth, Beth, I'm sorry! I'm really, really, sorry.
Beth: You gonna attack me again, psycho?
Kate: No, no. I it's a long story, but I didn't recognize you then, but I do now.
Beth: Well, you are the only one. Nobody else even knows who I am. I feel like I'm going crazy. What's happening?
Kate: My wish came true.

Kate: How are we doing on the location of the hostages?
Luke: I'm working on it, but GCPD's got nothing, which is not a total surprise because they don't have enough sense to turn on the Bat-signal.
Kate: Haven't you heard? I'm too political.
Luke: So they'd rather avoid a political hot potato than have Batwoman save the kid of one of their own? That's crazy.
Kate: Welcome to the world we live in. I'm gonna save them anyway.
Luke: Sounds like something Bruce would say.
Kate: (sadly) Yeah. Well, he'd probably actually do it, too.
Luke: Okay. What is it?
Kate: I could have saved her, Luke! Everybody told me that if I went back in that car to get Beth that I would have been killed. That's not true.
Luke: You want to hear the truth? You got Beth back! She doesn't need saving! But right now, there are some pretty high-profile hostages who do.
Kate: On my way.

Beth: If Kate's been kidnapped, shouldn't we, um, call my dad? He'll know what to do. He's, like, special forces.
Luke: He's in jail.
Beth: What?!
Luke: For killing your stepmother, but he didn't do it. Alice did.
Beth: Okay. Um, dumb question. Do police exist on this Earth?

Beth: This Mouse guy is demanding Alice, yeah? Well, what if we give her to him?
(Luke realizes almost instantly what Beth has in mind.)
Luke: No. No. Sorry. That's that's not gonna happen, okay? That's insane, and Kate would never let you.
Beth: Kate saved my life in my world. I'm gonna save her life in this one.

(Sophie enters the holding cell containing Alice.)
Alice: Oh, my ears and whiskers, how late it's getting!
Sophie: Look. Alice - I'm gonna be honest with you.
Alice: Hmm.
Sophie: My heart breaks for that little girl who was trapped in that cell... for everything that man did to her.. and I know somewhere deep down that little girl is still fighting to get out.
Alice: Kate used to think that, too. But just like that little kitten, Beth never made it out of the basement.

Mary: So she's basically got two go-to moves in her repertoire of crazy. Either say something terrible in a really sweet voice. Or you say something sweet but make it sound like it's the scariest thing in the world.
Beth: She sounds lovely.
Mary: Yeah, and if you really get into some trouble, just throw out a random quote from Alice in Wonderland. "Curiouser and curiouser" or... "Off with her..."
(Mary looks at Beth and gasps, shivering a bit.)
Beth: What? Do I look that bad?
Mary: (nervously) No, no. You... you look perfect.
Beth: Then what is it?
Mary: Just... the last time I looked into those eyes, my mom was dying in my arms, poisoned by Alice. (sighs) So it's just hard not to...
Beth: Hate me? I don't blame you. Alice is me. And I'm her, at least in some ways, I guess. Which is why I can't help but feel responsible for what happened to your mom. And I am so, so sorry.
Mary: (shaking her head) You don't have to be. You are nothing like that bitch.

Kate returns to her office to find Beth Kane waiting for her.

Beth flees the office after Kate attacks her, thinking she is Alice playing at some game, leaving behind her bag as she maces Kate.

When Beth was held captive by Dr. August Cartwright, Johnny gave her a kitten as a birthday present. She named it Chessy - short for Cheshire.

Beth's birthday wish on her first birthday in captivity was that she could see her sister and father. Dr. Cartwright taunted her by telling her the wish would never come true now that she had said it out loud.

Jacob Kane tells Sophie not to question Alice. He believes there is nothing left of his daughter in her.

Kate realizes the Beth she confronted was someone else when she goes to Sophie about Alice escaping, only to discover she is still in the custody of The Crows.

Beth's bag contains an ID card that is not real but is also too high-quality to be fake, according to Luke.

Beth used "waffles" as the password on her phone just like when she and Kate were kids. Kate says it was the only one she could remember.

Beth's phone contains a photo of herself and Kate Kane that looks very much like the picture Kara gave Kate in 109.

Kate finds Beth at the playground they always went to on their birthday as children.

Alice asks for Sophie to give her back her personal copy of Alice in Wonderland, which she says she's had since she was held captive by Dr. Cartwright.

According to Alice, Kate hates surprises but she loves them.

Mouse kidnaps the sons of Commissioner Forbes and Mayor Atkins.

Beth has a Master's Degree in Astrophysics.

The Kate of Beth's Earth did not have tattoos.

The Jacob Kane of Beth's Earth was still the commander of The Crows.

Beth says that she and the Kate of her Earth were best friends, even as adults.

The building Kate is turning into a bar is still open and a bank on Beth's Earth.

The car accident that separated Beth and Kate also occurred on Beth's Earth.  The difference is that on the other Earth, Kate crawled into the car and pulled Beth out of the car before it fell off the bridge.

Sophie gives Alice her copy of Alice in Wonderland.

As a child, Alice imagined Dr. Cartwright as being like the Caterpillar, due to his continually smoking a pipe.

Commissioner Forbes refuses to light the Bat-Signal, despite Mouse's public threat against his own son. He refuses to answer when reporters ask if this is because of Batwoman outing herself in 110.

Kate is attacked en route to the Bat Cave by the Wonderland Gang and chained in a car along with the hostages.

Kate tells Sophie to let Alice go twice. This is part of a code they practiced while in military school together, where repeating an action twice meant to do the opposite.

Alice and Mouse created their own secret language based on Alice in Wonderland as children. When Alice was worried about Dr. Catrwright finding Mouse sneaking around, she would ask "Are there any lions or tigers about here?" When Mouse replied "It's only the Red King snoring." she knew it was safe to speak freely.

Alice made Chessy a sweater from one of her blankets, just before Dr. Cartwright discovered the cat's existence.

Dr. Cartwright killed Chessy in front of Alice and Mouse.

Based on the fine work of the sweater she made Chessy, Dr. Cartwright put Alice to work on sewing the human skin he was saving to make a flesh mask for Mouse.

Beth suggest that she can pose as Alice to get Kate free from Mouse.

Mary helps to make-up Beth as Alice and coaches her on how to act like Alice.

Alice tells Sophie how Dr. Cartwright showed her the picture of her father's second wedding in the newspaper and that he had replaced her mother and her already and was never coming for her.

Beth's cover as Alice is blown whens he fails to respond properly to Mouse and Alice's catch-phrase to tell one another that all is clear.

Kate frees herself, the hostages and Beth from the car before it can catch on fire and explode.

Dr. Cartwright destroyed Alice's copy of Alice in Wonderland. Mouse rebound it with strong fishing line. It was in this moment that Beth became Alice and began calling Johnny Cartwright Mouse.

Alice is able to use this same line as a weapon to make her escape from The Crows' base.

Mouse goes through surgery after his fight with Kate and is confined to the ICU with a six-man guard.

Protesters form a mob outside of GCPD headquarters in response to their refusal to light the Bat-Signal.  Kate makes a brief appearance on the rooftop, allowing the crowd to see her as an acknowledgement.

Mary, Beth and Luke organize a surprise birthday party for Kate in her bar.

Jacob Kane orders Sophie to give the Crows shoot-on-sight orders for Alice, saying that now that she's a fugitive they can kill her with no one batting an eye.

As the episode closes, both Beth and Alice begin having severe headaches.

An amazing episode which throws a weird twist into the show with the arrival of Beth Kane from another Earth.  Rachel Skarsten continues to be the show's VIP, managing a double performance this time as a sane Beth and an even more erratic Alice.  At least now we have some way of keeping her around, because it will be a sad day if this series should ever lose its chief villain.
Posted by Starman at 9:30 PM