Batwoman Episode Guide: Season 1, Episode 10 - How Queer Everything Is Today! 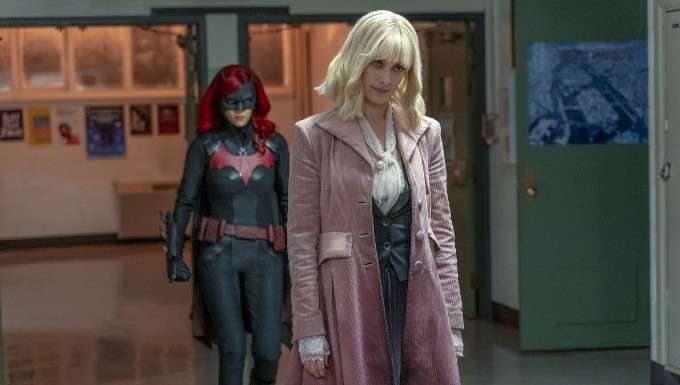 When Gotham goes gaga over a potential romance between Batwoman and a handsome young cop, Kate wonders if she can be true to herself in both her identities, despite the risk of exposure. Meanwhile, as Alice revels in her victory over Catherine Hamilton-Kane and Mary throws herself into managing Jacob's defense, a master hacker ransoms the secrets of everyone in Gotham City.

Batwoman: Elegy by Greg Rucka and J.H. Williams, the movie Batman Begins (mention of a Scarecrow plot involving the trains) and All-Star Batman: My Own Worst Enemy by Scott Snyder and John Romita Jr (villain blackmails a city by threatening to expose their secrets.)

Ruby Rose does a fantastic job of selling Kate's conflict over being true to herself and the necessity of a secret identity.

The hero cop who is shipped with Batwoman is named Slam Bradley. In the classic DC Comics universe, Samuel Emerson "Slam" Bradley was a private eye, who first appeared in Detective Comics #1 in 1937. Slam had his own feature until Batman appeared two years later and slowly took over the Detective Comics title. Slam would make infrequent appearances over the next few decades. A cop named Slam Bradley would later be shown as a member of the Metropolis Police Department through Superman in the 1990s,but this Slam Bradley would later be retconned as the son of the original. The original Slam later became a supporting player in Ed Brubaker's Catwoman and went on to father her daughter, Helena Wayne.

The Arrowverse Slam Bradley is a good-looking cop described as resembling actor Chris Evans. Both Luke and Kate sarcastically refer to him as Captain America, confirming that the Marvel Cinematic Universe is still a thing in the Arrowerse.

The idea of a villain trying to crowd-fund a ransom or threatening to reveal everyone's secrets is similar to the plot of an All-Star Batman storyline, My Own Worst Enemy. In that story, Two-Face threatens to reveal the secrets of everyone in Gotham City if someone doesn't save him from being "cured" by Batman.

Mention is made of a safety protocol added to the trains after a Scarecrow incident involving the trains. This could be a nod to the movie Batman Begins.

The elevated trains in Gotham City run on a 650-volt, 3-rail system,.

Ever since Scarecrow hacked all the trains in Gotham City at some point in the past, each train is run off an independent analogue system.

Luke discovers that the hacker is using a packet analyzer - a deice which intercepts and jumbles traffic as it passes over a digital network - to hack the trains remotely.

Luke designs an electric charge disruptor, which kills every electric current within a 100-meter radius for 10 seconds.  He believes they can use it to find the Terrier since shell probably have her phone protected from such things.

Like uses an offline reverse audio modulation of the talking Terrier emoji to access the hacker's actual voice. He determines she's a teenage girl. Kate is able to further narrow down the suspect poll by recognizing the bell in the background of Terrier's recording as the bell at Gotham Prep.

Luke: I got to say I can't really blame people for shipping you and Captain America.
Kate: Have we not had this conversation? I'm very, very gay.
Luke: Have you not seen Batwoman? Major straight vibes. Kate, it's not a total negative.
Kate: That I'm apparently dating Mr. Underwear that leaves nothing to the imagination?
Luke: That Gotham's confused. It's misinformation. The less they know about you, the easier it is to keep you a secret.
Kate: A train lost its brakes, and I saved 450 people from smashing into a concrete wall, and all Gotham cares about is Batwoman's sex life.
Luke: They just want to see her happy.
Kate: Well, too bad because she's not.

Sophie: You ever feel like you're hiding from the world?
Batwoman: I'm literally standing in a shadow.

Kate: Am I a fraud?
Luke: You still hung up on this Slam Bradley love affair?
Kate: Yeah. Whenever I put on this suit, I feel like I'm lying to our entire city.
Luke: Well, that's the job.
Kate: According the Multiverse, my job is to be a Paragon of Courage.
Luke: Right because a Paragon finder said so before the infinite Earths collapsed into a single space-time continuum. I'm sure it was all very exciting.
Kate: I live in shadows, I wear a disguise, and I let people believe that I am dating Captain America. What part of that is courageous?
Luke: Kicking bad guys' asses to protect your city is pretty damn courageous.
Kate: You said it yourself. I'm the most famous face in Gotham, but their image of me is not me.
Luke: They think you're a hero, Kate. You are.

Parker: My mom and dad thought they'd been raising some BTS-loving heteronorm. Now they sleep clutching rosaries and want to disown me. That's why I need the money To get out of Gotham.
Batwoman: That sucks, and it's not fair, but it is not an excuse to put hundreds of lives in jeopardy
Parker: My parents want me to be someone I'm not. Do you know how that feels? I hate myself, okay? And let's raincheck your it gets better PSA. We both know I'm gonna grow up hiding my girlfriends and aspiring to be represented by an ancillary character on my favorite TV show just like you were probably the cool girl in high school, and now you're famous, and everyone's shipping you and the hottest guy in Gotham. We have nothing in common. In fact, you pretending to feel bad for me is kind of making it worse, so could you just leave me alone before I find more reasons to wish I were dead?
(Parker storms out of the bathroom.)

(Batwoman finds Alice and Parker in the middle of the Gotham Prep Woodshop. Alice is holding a circular saw in one hand and holding it close to Parker's face.)
Alice: Mmm! I love living in a world where we trust teenagers with these things!

(Alice tells Parker to send a picture of Kate with her mask off all around Gotham.)
Parker: And if I don't, what are you gonna do, kill me? You need me. If you kill me, you lose.
Alice: As do you because you're dead. I'm sorry. Do they not teach Math in school anymore?

Alice: You're not a hero!
Batwoman: It doesn't take a hero to know what pure evil looks like. You ruined my life.
Alice: I fixed your life, Kate. Our father didn't believe us, and now he's being punished. Catherine tried to keep us apart for 15 years, and now she's dead. What more do I have to do to prove my loyalty to you?
Batwoman: You can tell me that you didn't put a bomb in a gym full of kids.
Alice: Ugh. Here we go again. Judgy, judgy, judge, judge.

Kate: (in journal, closing voice over) We all wear a mask of some kind; a cowl, a husband, wife, denial, anger. We all need our shield to protect us from the world, but for people like us, it's not always about stopping a runaway train or disarming a bomb... Sometimes, the best way to save someone is to be yourself.

Luke gives Kate a custom motorcycle to ride as Batwoman.

As this episode opens, it is two days until Kate's birthday. When she mentions this to Luke, he says he had no idea.

Vesper Fairchild mentions the death of Oliver Queen, which occurred during Crisis on Infinite Earths.

Mary is signing off her social media for a while due to the constant stream of negative comments she is getting regarding her family.

Kate tries to reach out to Mary but is blown off.

The hacker who sabotaged the train is dubbed The Terrier after she hacks a live news feed and puts a cute dog filter over the mayor's face.

Mary is able to get Jacob's trial bumped up a week from February 14th.

Luke tracks the packet analyzer used by the Terrier to a gang of Russian hackers. Batwoman goes after them only to find Sophie Moore is already there questioning them.

Tyler left Sophie, saying he thought she was lying to herself about being over Kate.

Kate and Luke are able to narrow the search for the hacker to Gotham Prep.

Parker was blackmailing the city to get the money to move out on her own, having been disowned by her parents after she was outed by the ex-girlfriend, Kayla Mason, who dumped her after she refused to come out to the whole school.

Alice plans to use Parker to reveal Kate's secret identity to the world.

Kate unmasks herself and reveals who she really is to Parker.

Parker is able to pull off a hack that summons the police to Gotham Prep while also sending a false message to Alice and Kate's phones.

Mary plans to close down her free clinic, but Sophie talks her out of it.

Alice bombs the Gotham Prep dance, but the building is evacuated before anyone is hurt.

Batwoman tackles Slam Bradley out of the way of the explosion and refuses to kiss him despite the cheering kids demanding it happen after he tries to kiss her.

Kate signs Parker up for 150 hours of scrubbing graffiti as punishment for what she did. She makes it clear that if she catches her hacking again, she will turn her in to the police.

Alice is placed in the custody of the Crows as a favor to Sophie Moore from the mayor.

Luke bakes Kate a Batwoman-themed cupcake for her birthday. He also says he supports Kate for why she did what she did and says they'll do with the fallout when it comes.

Batwoman outs herself to the world as a lesbian in an exclusive interview with Kara Danvers (i.e. Supergirl's secret identity) conducted in CatCo Magazine.

The same issue of CatCo Magazine outing Batwoman also has a feature on STAR Labs facilities and mentions that Lena Luthor was recently seen in Gotham City. This further makes it clear that Earth-38 and Earth-1 are merged together.

The episode ends with Kate returning to her office only to find Beth Kane waiting for her. As this occurs while Alice is in custody and she doesn't seem to be wearing a flesh mask, the implication is that this is an alternate-universe version of Kate that somehow survived the collapse of the multiverse.

Beth claims to have just returned from a semester abroad and found her apartment was turned into a boys dorm.

Beth asks if Kate fired the hot guard at the front desk. This may be a reference to the guard Kate let go in 107, after he let Mary into her office without calling ahead.

A solid episode with a truly shocking ending that could forever redefine the show. It looks like the fallout from Crisis isn't quite over yet.
Posted by Starman at 3:19 PM