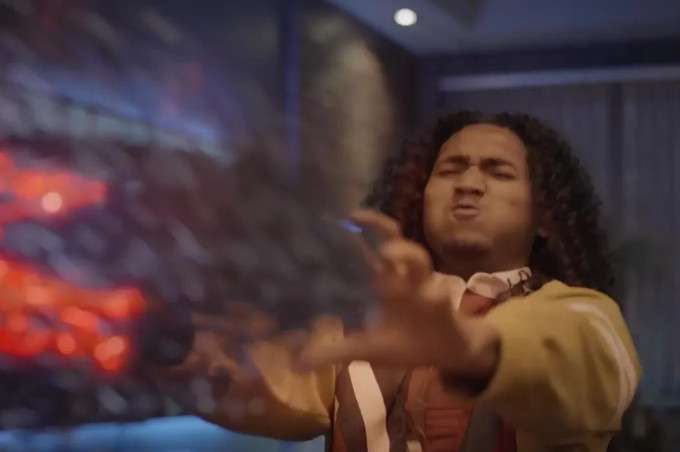 Things come to ahead between Lynn and Jefferson about how to best get the ASA out of Freeland. As Anissa fights against Painkiller's poison, Jennifer decides to look into her new classmate Brandon and find out just why he was able to counter her powers with his own.

There's some great imagery at the end of the first segment, with Jefferson seen in silhouette as he walks away with gospel music playing in the background.

When Instant uses his powers, it generates a neutrino anomaly. The ASA learns how to track this and uses it to determine when Instant and the Markovians have entered into Freeland.

The ASA set up neutrino disruptors around their key assets in Freeland to trap the Markovians.

Anissa: I guess if you're seeing this, it means I didn't make it (clears throat) and I'm okay with that. Really, I am. Because I know my sacrifice... it meant something. Jen... Jen, I'm sorry. I'm so sorry for leaving you. (tearing up) Especially with what you're going through. Mom. Dad. (clears throat) Uncle Gambi. I knew what I was doing, and it was worth the risk. (coughs) Now, none of you are gonna take comfort in hearing this, but it's because of you that I was strong enough to do what had to be done. (moans in pain) You all taught me to stand up for what's right even if it's difficult because evil triumphs when good people do nothing, and I damn sure wasn't gonna do nothing.

Jefferson: If I could say anything to Tavon, I'd tell him how proud I am of him. I'd tell him how much he inspired the other students and me to be the best version of ourselves. I would tell him that his death His death will not be in vain.

Tobias: Did someone wake up on the wrong side of the light socket this morning?
Lynn: I'm not here to talk to you, Tobias. I'm just here to check you're healing properly, so I can harvest another round of marrow.
Tobias: So you can cure the Pod Kids.
Lynn: I didn't say anything about the Pod Kids.
Tobias: You didn't have to. Helping them would be the only reason Odell pulled me out of the hole I was in. You know you can't trust him, right? So, whatever he promised...
Lynn: But I suppose I can trust you?
Tobias: I'm a true friend, Dr. Stewart. I'd much rather stab you in the front, whereas Odell...Well, you get the metaphor.

Jefferson: Agent Odell. I can't say I'm surprised to see you.
Agent Odell: Mr. Pierce, I came by to tell you that the ASA has a team of neurologists standing at the ready to give you a thorough examination.
Jefferson: I don't need a neurologist, I'm fine.
Agent Odell: (scoffs) I beg to differ. You must have suffered brain damage to think there'd be no consequences from breaking our deal.

Lynn: You're a monster, do you know that?
Tobias: You may think I'm a monster, but I'm nothing compared to Odell. You have no clue who he is, do you?
Lynn: You're just trying to get inside my head.
Tobias: Maybe. If only you had a way to make me tell the truth and get the answers you seek. Oh, wait. You do. (smiles sadly) I mean, you did. Poor, poor Issa.
Lynn: (startled) What do you know about Issa?
Tobias: The question isn't what do I know about Issa. The question is... what does Odell know?

Anissa records a video for her family in case she dies from the poison.

Jamilla Olsen confronts Jefferson at the funeral and starts asking him questions. He agrees to answer one question - what he'd say to Tavon right now if he could talk to him one last time.

Lynn gets into a fight with Jeff over his going out as Black Lightning and fighting the ASA commandos.

Gambi says that the poison infecting Anissa is destroying her cells faster than anything he's ever seen. He says that if it weren't for her metahuman healing factor, she'd already be dead. As it is, the poison is repressing her metagene and making her mortal, even as it's making her weaker by the moment.

Gambi thinks the poison is similar to one he encountered before but it is 10 times as potent as the original. He estimates Anissa has no more than two weeks to live if he can't find an antidote.

Gambi is trying to supercharge the anti-venom he created for the original poison, but he can't guarantee that will work.

Gambi agrees to give Anissa a day before he tells Jeff and Lynn about Anissa being poisoned.

Truthteller Johnson was fished out of the river the morning after Tavon's funeral.

Inspector Henderon asks Gina to get her engineering student nephew to build a broadcasting system strong enough to reach all over Freeland.

Somehow, Tobias heard about Black Lightning attacking two ASA commandos depsite being in solitary confinement. He tells Lynn he's willing to keep Jefferson's identity a secret if she can get him a list of ever metahuman in The Pit and what powers they have.

Jefferson goes by Anissa's apartment and tries to apologies for pushing her to bring Tavon back to Freeland. He says it is his fault that he died. Anissa refuses to let him take the blame, says it is her fault for not fighting him harder on it being a bad idea and that Tavon's death is her responsibility.

Grace says she doesn't remember much when she shape-shifts into a leopard, but she does remember the smells and can recognize those smells as a human. She says she can smell death on Anissa.

Jennifer breaks into Brandon's apartment and finds that it is full of coal, miniature greenhouses, diamonds and that his computer has pictures of Lynn on it.

Jennifer is now capable of using her power to bypass the password on computers.

Again, Brandon shows that he is capable of repelling and absorbing Jennifer's electric powers.

Agent Odell confronts Jefferson about his attacking the ASA commandos. He does not react well to Jefferson saying their deal is off.

The teleporting assassin working for the Markovians, last seen in 216 appears again. This time, he kills all the ASA commandos in a truck heading into Freeland and commandeers it for the Markovians. According to Black Lightning Wiki, this metahuman is known as Instant.

Inspector Henderson picks up Jamilla Olsen and threatens her if she doesn't stop reporting on things in Freeland. When she refuses, he recruits her to become the new voice of the Resistance broadcasts.

Brandon tells Jennifer that he isn't stalking Lynn - he's trying to find Dr. Jace, who was responsible for killing his mother and he intends to kill her. The last link he had to her was Lynn.

Brandon agrees to keep Jennifer's family out of his business.

Brandon says that his powers let him manipulate the earth and everything that comes from it. This apparently lets him literally stay grounded in the face of Jennifer's electrical energy attacks.

Brandon reveals that his powers let him change coal into diamonds. He give Jennifer one he says that should pay for her college.

Gambi traces the poison infecting Jennifer and determines its a stronger variant of what Painkiller generated when he was first empowered by Tobias.

Lynn gives Tobias five minutes to memorize the printouts she made.

Tobias hints to Lynn that Agent Odell killed Issa because his power to make people tell the truth was too dangerous.

The five main ASA assets in Freeland are The Pit, The Armor, The Detainment Facility, The Perimeter Generator and the Command Center at Club 100.

Colonel Mosin is the leader of the Markovian strike team sneaking into Freeland.

Jefferson intervenes in the fight between the Markovians and the ASA. However, his powers short out the neutrino disruptors, allowing Instant and Colonel Mosin to escape.

Agent Odell is apparently killed in the fight with the Markovians.

Kyrie is another member of the Resistance.

Instant says he was hired to get in and out of Freeland - not fight Black Lightning - which is why he ran for it after the neutrino disruptors failed.

Gambi scans Khalil Payne's grave and determines it is empty.

Lynn leaves Jefferson, because of his continuing to act out as Black Lightning without consulting her.  It is clear, however, that her perceptions have been altered by the Green Light usage.

An odd episode, which barely gives Jennifer anything to do and kills the main villain off in the most unceremonious fashion possible... assuming Agent Odell is killed, which may not be certain given how often people on this show come back from the dead at random.

(UPDATE: Sure enough, Agent Odell is resting in the next episode.)
Posted by Starman at 8:52 PM