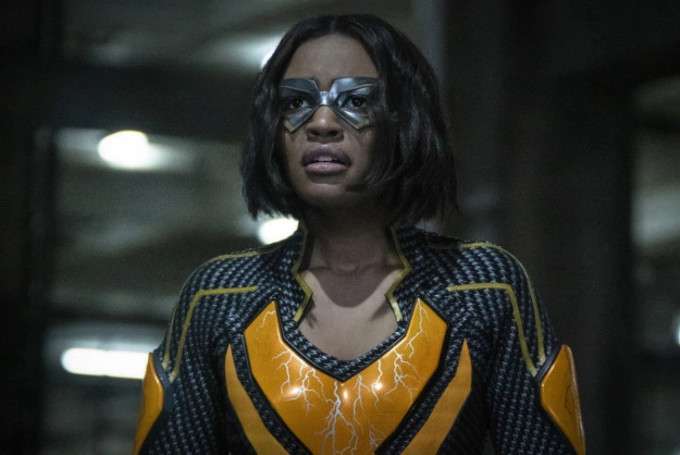 Tobias Whale is on the run and desperate to launch an attack that will cripple Freeland and kill Black Lightning once and for all. With a power outage, a riot and the Masters of Disaster threatening Freeland as Jennifer loses control of her powers, can Black Lightning and Thunder hope to save the city and bring Tobias to justice before the resurrected Lala puts him in the ground?

The Batman and the Outsiders comics of the 1980s.

You can tell the budget for special effects was saved for this episode and the fight with the Masters of Disaster.

Anissa makes reference to Batman existing when Jennifer asks her if she thinks Gambi will be all right, saying with everything Gambi has done she wouldn't be surprised if he told them he was Batman.

(Jennifer and Anissa are looking down at the injured Gambi.)
Jennifer: You think he's gonna be okay?
Anissa: Shoot. I wouldn't be surprised if he told us he was Batman! He'll be fine, all right?
Jennifer: You know, this is another one I owe Tobias for.
Anissa: Look, you're right, baby sis, but I need you to calm down, all right?
Jennifer: No, I'm fine. I'm... Seeing him out of the blue like that kind of caught me off guard. But it's cool. I'm not gonna blow us up.
Anissa: Good, 'cause I got stuff to do.
Jennifer: Yeah, I know, Harriet. Or should I say Blackbird?
Anissa: Well, I kind of like Blackbird. She cool, right?
Jennifer: You're such an overachiever. It's not enough you're in medical school, you gotta be two superheroes. Or maybe just one now, 'cause of Dad's code?
Anissa: Nah, Blackbird is needed. But I will start planning better and stop lone-wolfing it.
Jennifer: You know, I can roll with you.

Jennifer: If I can float in my sleep, then I can probably fly while I'm awake.

(Tobias is in his office, talking to the painting of Tori. He is quite clearly insane now, laughing nearly constantly.)
Tobias: I know, right? As soon as I kill Black Lightning, I'm gonna scoop up all those poor, lost little meta-humans.
(Lala enters, gun drawn.)
Lala: Damn. You talkin' to paintings now? It's about time I killed your ass.
Tobias: Latavious? Please. The devil deals the cards.
Lala: (grunting) That don't work on me anymore.
(Lala steadies his gun and Tobias laughs.)
Tobias: You think I never caught any lead?
(Lala fires as Tobias keeps laughing. The bullet bounces right off of him.)
Lala: The next one's goin' right between your eyes.
Tobias: I don't think so. E pluribus unum.
(Lala collapses on the ground as his body begins smoking and Tobias laughs again.)
Tobias: Yeah, that one worked. Yeah. Do you feel that bubbling up inside?
Lala: (weakly) What did you do?
Tobias: Lazarus Prime only brought you back. I'm the one who brainwashed you. First level was about control. You clearly passed that. Second level, way deeper. That passphrase was Latin for, "From many, one."  Bringin' out all the tattoos, all the people you killed, at once. And your black ass certainly killed a lot, directly and indirectly.
(Lala's skin continues to smoke. He screams as Tobias continues laughing until Lala passes out.)
Tobias: Yeah, Tattoo-man. Go to sleep. The next time your ass wakes up, you're gonna be buried in some concrete on the East Side.
(Tobias laughs and claps, before looking to the painting of Tori.)
Tobias: What? I know. He actually thought that he had me.
(Tobias keeps laughing... until Jennifer flies through his window in a hail of glass.)
Tobias:Who the hell are you?
Jennifer: Call me Lightning. And this is payback.
(Jennifer blasts Tobias with a lightning lasso and lifts him off the ground as he is electrocuted.)

Agent Odell: Let's skip the prelims. I know exactly who and what you all are.
Lynn: You need to leave.
Agent Odell: There's something you need to know. The Markovians have a stockpile of meta-humans in pods. The largest on Earth.
Jefferson: You've been asked to leave. Nicely.
Agent Odell: (nodding in polite acknowledgement) Not yet, Mr. Pierce. Thanks to you, the Markovians have Dr. Jace. And here is the best part. The concentration of meta-humans in Freeland from the vaccines and the Green Light experiment make it the greatest threat to Markovia. It's only a matter of time before they launch a lethal first strike. I'm swearing in Black Lightning, Thunder, and (looking to Jennifer) whatever you're calling yourself, young lady. The Markovian War is coming. And Freeland... Freeland is ground zero.

Gambi finds Jennifer and tries to bring her under control while wearing his insulated gloves.

Lala finds Jennifer and Gambi and is ready to shoot her because she looks like she's dangerous.

Gambi persuades Lala to leave her alone after he confirms he is not with Tobias.

Jennifer is able to get control of herself but Gambi develops severe radiation burns in the process.

Jennifer and Anissa take Gambi back to the sanctum, while Jefferson checks out Tobias' hideout.

Jefferson finds the kidnapped Green Light Babies in the pods.

Tobias plans to use The 100 to start a riot after the Freeland D.A. announces that no charges will be filed against the police who killed Cape Guy in 215.

Tobias also has Coldsnap freeze the Freeland power plant to cause a power outage, thinking this will depower Black Lightning if he doesn't have a power grid to draw off of.

Jennifer says she can help Anissa with her robbing-the-rich act as Blackbird.

Lynn finds Dr. Jace hiding with the pods on Tobias' hide-out and beats her up.

Dr. Jace bargains for protection and asks to be turned over to the police rather than the ASA. In exchange for that, she tells Black Lightning about the Masters of Disaster.

The teleporting assassin from 209 finally arrives in Freeland. It is revealed that he was hired by the Markovians to capture Dr. Jace.

The teleporting assassin kills several cops at the Freeland jail. He refuses to renegotiate a deal with Dr. Jace when she offers him more money, saying that when he gets bought, he stays bought.

Reverend Holt is revealed to not be dead and that he has made his church into a shelter during the riot.

Lala saves Black Lightning and Thunder from the Master of Disasters after they get ambushed.

Jennifer uses her powers to thaw out the power plant and restart the city's electrical grid under Gambi's direction.

Cutter abandons Tobias after he tries to release the Green Light Babies thinking they'll automatically go out and start fighting for him.

The Green Light Babies awaken as Lynn is in the middle of asking Agent Odell for a few minutes to administer a serum to stabilize them before they try moving them.

Lynn is able to use the information Dr. Jace gave her to trace the signal that opened the pods. This enables her to find Tobias' office and the briefcase.

Jennifer goes after Tobias hideout, using her powers to fly for the first time after she sees the location on the comm system in Gambi's van.

Tobias is revealed to be bulletproof.

Tobias implanted Lala with a second code that would awaken all the tattoos of everyone he ever killed all at once. Tobias believes this wouldn't kill Lala outright and plans to have him dropped into a concrete building foundation where he can keep resurrecting over and over inside the rock.

Jennifer takes up the superhero name of lightning and electrocutes Tobias.

Jefferson arrives and stops Jennifer from killing Tobias. He does help bring him down, however, and they turn him in to the police.

Rev. Holt delivers an address to the people of Freeland across the radio and Internet, thanking God for Black Lightning and Thunder and urging people not to lose hope, because love will stop what evil has started.

Tobias is sent to a secret metahuman prison called The Pit. He is informed that he's been classified as a metahuman weapon of mass destruction and, as such, has no right to a lawyer and no reason to hope for escape or rescue.

It is said that most of the Green Light Babies released from the pods were recovered and returned to their families.

It is revealed that Agent Odell has three teens in pods - Wendy Hernandez, an apparently not dead Khalil Payne and Issa Williams (a.k.a. Body Bag Boy from 202.)

Agent Odell reveals that he knows Jefferson, Anissa and Jennifer have powers.

Agent Odell says he needs to deputize them for a coming war with the Markovian govenment, who are certain to attack Freeland as the place with the highest population of metahumans outside of Markovia, which is building a metahuman army and has captured Dr. Jace.

An odd conclusion to an odd season. Lala's resurrection ultimately serves no purpose, other than turning him into a deus ex machina that can save Black Lighting and Thunder only to "die" again with no apparent answer as to if he'll return from Season 3. The teleporter who was introduced and forgotten half a season ago suddenly returns.The whole Green Light Baby storyline fizzles out as the only named characters are still in the government's custody and every honest bit of drama from the season is negated as it is revealed that Khalil is still alive. The worst part of all is Tobias "going crazy," turning the character into a giggling fool out of nowhere. Tobias shouldn't go mad with power - he can become overconfident, but not crazy. And this was crazy. And not the good kind of crazy. It's not bad enough to make me stop watching but I'm starting to wonder if this series is worth profiling given how few connections it has to the comics at this point which would necessitate a guide like this.