Batwoman Episode Guide: Season 1, Episode 5 - Mine Is a Long and Sad Tale 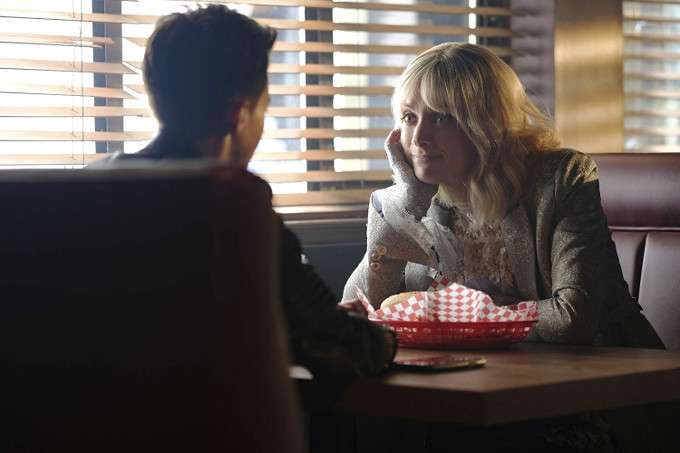 Alice meets with Kate and takes her down the long and winding road of her life after the accident, revealing how Beth Kane became Alice. Meanwhile, after an argument with her mother in which she learns of Catherine Hamilton-Kane's actions, Mary goes off in search of Kate and a sympathetic ear. Unfortunately, all she can manage is Luke Fox.

The green-screen effect when Kate and Alice are driving around is sub-par.

Again, Rachel Skarsten steals the show as Alice, narrating the horrific story of how Beth Kane became her wonderfully while still dancing on the knife's edge between sympathetic and scary as she confronts Kate.

Ava Sleeth's performance as the young Beth Kane is truly heartbreaking. You truly feel for her as everything goes wrong for her and she suffers torment after torment.

The fight scene in which Batwoman takes down Alice and her gang is well-blocked and well-shot, with the editing seamlessly cutting between the black-and-white view of Batwoman's night-vision and the dark room where Alice and her gang are helplessly trying to fight back.

A news report in the flashback mentions how the search for Beth Kane was expanded into Bludhaven County. In the DC Comics Universe, Bludhaven is a town located upstream from Gotham City and is one of the few cities on Earth even more corrupt and hellish than Gotham City. It is where Nightwing moved to establish himself outside of Batman's shadow.

There are no night-vision goggles anywhere in the Batcave, because according to Luke "Batman doesn't do goggles." The helm of the Bat-suit, however, apparently has some kind of built-in night-vision mode.

When Catherine tries to explain to Mary how she faked the evidence of Beth Kane's murder, Mary misses the point and focuses on how the investigators could possibly have confused deer bones for human bones, since the density and genomes are quite different.

Luke: They're calling him the Skin Pirate because apparently he likes to take skin from the booty.
Kate: Never say that again.
Luke: I didn't write the article.

(Alice wakes up, her arms chained above her head. She looks up, chuckles and then looks at Kate, who is in her Batwoman costume, with the mask off.)
Alice: Kinky. Even for you.

Alice: You're not asking the right questions, Kate. What is my evil plan? Who am I targeting next? How am I gonna do it? When you really need to be asking why? Why am I like this?
Kate: Okay. Why?
Alice: (cutely) Oh, you don't want to know that.
Kate: I have waited 15 years to hear it.
Alice: Well, it all began with an unfortunate event which I remember vividly, and if given the chance again, I would take it back in a heartbeat. It was a simple, effortless thing that I had done so many times before. I woke up.

Alice: The little boy just sat there with his hair in his eyes, playing with his trucks. For him, it was an ordinary day But for me, it was the first worst day of my life.

(Kate and Alice are sitting across from each other in a roadhouse diner. The waiter returns with Alice's burger and fries.)
Alice: Uh, two beers, please.
Kate: None for me.
Alice: You do not want to be sober for the remainder of this story. Trust me.
(Kate just smirks, as if to say "Try me.")
Alice: (clears her throat in a ladylike fashion before whispering to the waiter) Just the one beer.

(Alice finishes telling Kate about how she found a severed face in the sink of the basement. Kate just stares at her, aghast.)
Alice: And that was just the first day.
(The waiter returns with Alice's beer. She smiles, takes it, and looks at Kate, still in shock.)
Alice: Hmm. I think she'll take that drink now.

(Luke has just sent away the security guards who apprehended an incredibly drunk Mary)
Luke: Uh, can I help you? Possibly to an AA meeting?
Mary: That depends. Is your name Kate?
Luke:  Most definitely not.
Mary: Then can you tell her that I'm here?
Luke: I'm sorry. Who's here?
Mary: Mary? Kate's soon-to-be ex-stepsister? And you are?
Luke:  Luke, Kate's, uh, associate, Assistant. Real estate person. Look. Kate's not here.-
(Mary sighs in melodramatic annoyance.)
Luke: You know what? You could leave her a message.
Mary: (tearing up) Okay. Tell her that I'm so sorry I was ever born from the Wicked Witch of Gotham, and I get why she's avoiding me, but I'm totally on her side! I can't believe that my mom would ever do something so awful! (in sudden realization) Oh, my God! Do you think that she killed that deer, too?!
(Luke looks completely lost at all of this.)
Mary: Are you getting any of this?
Luke: All I heard is that your mom may or may not have killed a deer.

(Jacob Kane rounds a corner, running right into Alice.)
Alice: Hi, Daddy.
(There is a long pause as Jacob regards her. Finally he speaks.)
Jacob: Where's Kate?
Alice: "Where's Kate?"(angry) "Is Kate okay? Is Kate happy? Is she sleeping enough? "Has she done her homework, seen a doctor, had enough to eat?" Kate, Kate, Kate, Kate, Kate, Kate! I'm so sick of Kate!
(Alice pulls her knife and holds it to her wrist.)
Jacob: What are you doing?
Alice: (tearing up) Where's Beth? When was the last time you uttered those words, Commander Crow? Was it here? Was it in this house?
Jacob: Come on. Don't do this.
Alice: Was it when I called you and you didn't even believe it was me?
Jacob: Let's go outside. We'll talk.
Alice: You told your men to kill me.
Jacob: Put down the knife.
Alice: Because you don't care. You've never cared!
Jacob: Put down the knife.
Alice: You gave up on me!
Jacob: (suddenly shouting) Beth, drop the damn knife!
(Alice suddenly smiles through her tears.)
Alice: "Beth." You... you said it.
(Alice looks at Jacob. He looks at her and steps in, raising a hand as if to touch her face. Suddenly, she lashes out with her knife hand and stabs him in the stomach, her face returning to its usual mask of indifference.)

This is the first episode chronologically after the events of the Elseworlds crossover event.

The Skin Pirate is a new criminal who steals the flesh off of corpses. As the episode opens, they just robbed three morgues in one night, within a single nine minute window.

Luke and Kate determine that Alice is the Skin Pirate.

Kate is able to track down Alice and the Wonderland Gang and capture's Alice.

Alice reveals that the "Mouse" Dodgson told Kate about in 104 was the one who found Beth Kane after the car accident.

14 months passed between the time Beth Kane disappeared and when Catherine Hamilton created the fake DNA reports that convinced Jacob Kane to call off the search.

Alice tells Kate about how Catherine Hamilton paid her detectives to fake the evidence that Beth Kane as dead.

Kate calls her father, to get him to start tracing her phone, as she goes off with Alice.

Beth Kane was washed downstream from the accident site and discovered by Jonathan "Johnny" Cartwright, who alerted his father, Dr. August Cartwright, to the girl in the water.  Alice claimed to be ignorant of the name of Johnny's father, however, and this information is only revealed in the episode credits.

Johnny would later take the name Mouse, according to Alice.

Mouse had an amazing gift for mimicry, and could copy any voice he heard.

Catherine tells Mary about how she faked the evidence of Beth Kane's death.

Mary does not take it well and gets drunk, going to Wayne Enterprises to find Kate and cry to her about it.

Alice has Kate stop at Dusty's Roadhouse Diner, because she dreamed of them going to a diner like that together after she was rescued.

Mouse grows his hair long to hide his face, which is hideously scarred after an unspecified accident.

Beth was locked in the basement of the Cartwright house after she saw the news report about her still being missing and realized Dr. Cartwright had lied to her about her father being on the way.

It was here in the basement that Beth found the flesh mask in the sink - the image from Alice's nightmare in 103.

Luke and Mary meet for the first time.

Jacob Kane confirmed that the bomb which nearly killed Alice in 102 was made by Hamilton Dynamics.

Alice explains that Mouse's father had kidnapped Beth so his son would have a friend and that he had pulled Mouse from school and devoted himself to finding a way to fix Mouse's face by making him a realistic skin mask.

Alice escapes back to the Cartwright house with an unconscious Kate while her gang holds off Jacob and Sophie at the roadhouse.

Alice reveals that she found the tracker Kate planed in Dodgson and that she knew she was coming.

Beth knew how to pick locks with a nail when she was 13.

Beth tried calling her father once she escaped from the basement, but was caught in the act by Dr. Cartwright.

Jacob traced the call on his own after the GCPD refused to act. He and Kate both went to the Cartwright house.

Kate wound up on the opposite side of the door where Beth was being held at one point, seemingly sensing her sister but ultimately not testing the door. Beth, for her part, was too terrified to cry out, with Dr. Cartwright having threatened to kill everyone she loved if she ever tried to escape again.

Dr. Cartwright convinced Jacob that the call was a prank call initiated by Mouse, who was able to copy Beth's voice after hearing a recording of her on the news.

Jacob figures out where Alice took Kate after realizing they're driving around the same remote part of Gotham City where the Cartwright house was.

Luke searches for criminals similar to the Skin Pirate's MO and finds Jacob Cartwright - an Arkham inmate with a history of stealing skin from cadavers.

Luke says that the recent incident at Arkham Asylum (i.e. Elseworlds) was covered up, as were the inmate escapees that resulted from it.

Alice confronts Jacob Kane and stabs him in the stomach.

Alice and Kate wind up in a standoff with Kate holding Mouse hostage and Alice holding Jacob. They agree to part ways and fight another day.

It is revealed that Johnny gave Beth a gift the day after Kate and Jacob came and went away - a copy of Alice in Wonderland.

Alice and Mouse both took their names from Chapter Two - The Pool of Tears of "Alice's Adventures In Wonderland."  They regard each other as Brother and Sister now.

Phenomenal on every level and far scarier than many episodes of some horror series. Between Rachel Skarsten's performance and the writer's conception of the horrors Beth Kane suffered in becoming Alice, you almost want her to succeed in making Jacob Kane suffer
Posted by Starman at 1:31 PM