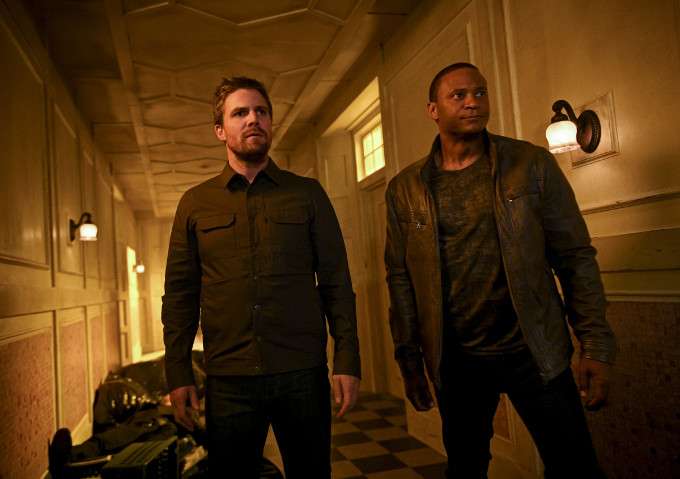 Returned to Earth-1, Oliver finds himself back in Hong Kong with Diggle and Black Siren, who refuses to believe that Earth-2 is gone. As she runs off to try and find another way home, Oliver and Diggle focus on finding an abducted Doctor who is important to The Monitor's plans and cross paths with their old ally, Tatsu. Unfortunately, their old enemy China White is also back in Hong Kong and once again after the Alpha-Omega virus.

The flashback sequences of Arrow Season 3 and Crisis on Infinite Earths.

Despite saying he doesn't really know anything about breach devices and only knowing the technology by reputation, David Chen has software on his computer that enables him to determine that Earth-2 is gone.

China White claims that she was released from custody because the American government feared a scandal if word got out that a federal agency was planting explosive bombs in the necks of convicts and forcing them to runs special ops missions for them. Wouldn't they have just killed all the Suicide Squad agents to cover their tracks rather than release them and hope they keep their mouths shut?

On the flip side, what makes Ollie think disobeying the Monitor by sneaking off to learn more about him is going to help matters?

The fight scenes between the Triad and Ollie and Diggle are well-handled.

This episode is the first to include a new opening introduction for Season 8.

Dr. Robert Wong is a renowned biophysicist and Nobel Prize winner, in the field of complex proteins and antibodies.

Oliver: (V/O) My name is Oliver Queen. For 7 years, I have fought with only one goal - to save my city. But now a new threat has emerged - a danger so severe it has forced me to leave my family in order to face it. And it won't be enough for me to just be the Green Arrow. To prevent the crisis that's coming, I am going to have to become someone else, I am going to have to become something else.

(Oliver awakens with a start from a nightmare of all his loved ones dying. He is in a strange bed in a strange room. The Monitor is in one corner.)
The Monitor: I warned you not to interfere.
Oliver: You didn't bring us here?
The Monitor: No. I discovered what had transpired on Earth-2, that you intervened to save Laurel Lance. I redirected you.
Oliver: What the hell happened back there?
The Monitor: A herald of what is to come. An entire world erased from existence.
Oliver: (confiused) Where's my mother? Where's... where's Tommy? Where's... where's Rene, where's Dinah?
The Monitor: They are no more.
Oliver: Did you hurt John and Laurel?
The Monitor: They are alive and nearby, but now you know that if we fail to stop the coming crisis, what you witnessed will occur on infinite Earths across the expanse of time.
Oliver: How did I fail? Your Dwarf Star particles are right there. (gesturing to a bag)
The Monitor: You disobeyed my instructions to avoid entanglements on a parallel Earth. You confronted Tommy Merlyn. You altered the fate of Laurel Lance.
Oliver: I watched her die once. Okay? I wasn't prepared to do it again.
The Monitor: You are not a man accustomed to following orders. But the survival of the multiverse requires that you obey mine.

Oliver: I ignored the orders of a cosmic being, and as a result, I watched an entire world just disappear, so I'm just trying not to make the same mistake twice.
Diggle: Well, if this cosmic being wanted someone willing to watch the mass murder of innocent people, then he picked the wrong hero. Shouldn't blame yourself, man.
Oliver: (dryly) Well, what about my behavior over the past 7 years has given you the impression that I would?

The Monitor says the he redirected Oliver, Diggle and Black Siren to Earth-1 after they entered a breach trying to escape Earth-2 without thinking of the destination.

The Monitor confirms that Earth-2 has been destroyed and blames it directly on Oliver's interfering with the affairs of that Earth instead of staying focused on the mission.

The Monitor instructs Oliver to find a man named Dr. Robert Wong. Again, he refuses to explain why he requires this.

Black Siren refuses to believe Earth-2 is gone. She takes the breach device and leaves to find someone local who can fix it.

The Internet cafe where Oliver tried to contact his family in 301 is revealed to be an ARGUS front. Diggle gets access to the backroom and a high-tech computer connected to the ARGUS intranet by telling the employee that Harbinger sends her regards.

Diggle calls Lyla into Hong Kong to keep an eye on Black Siren.

Dr. Wong has been missing for over a week. He was last seen at Wan Chai University, where he is a professor.

Tatsu Yamashiro (aka Katana) appears for the first time since 412.

Tatsu reveals that she left the Crescent Order after they demanded her death for giving the Lotus Cure to Nyssa Al Ghul. Since then, she has been a vigilante in Hong Kong.

The Cresent Order has knowledge of The Monitor and his true name, Mar Novu.

Tatsu recognizes the pins worn by the men in the last photo of Dr. Wong as the emblem of Hong Kong's secret police.

Black Siren met a hacker named David Chin through Cayden James several years earlier, who claimed to be able to get her back to Earth-2.

It is determined that Dr. Wong wasn't abducted but placed in protective custody, due to his working for the Chinese government to recreate the Alpha-Omega virus.

Black Siren learns that Earth-2 truly has been destroyed.

Olive plans to use the virus as bait to draw China White and Dr. Wong out of hiding. Tatsu points out this was the same plan her husband attempted and it failed.

China White says the American government released her from custody because they feared a scandal if word got out about what ARGUS had been doing to force criminals to work for them.

Black Siren saves Katana from being killed by China White.

Dr. Wong is saved and the virus is secured.

Oliver gives Tatsu some of the same healing herbs she gave him after she saved his life in 310.

Oliver says he is going to Nanda Parbat in search of information on The Monitor.

Lyla is revealed to know the Monitor and to have been in communication with him for some time.

Connor says The Deathstrokes already took everything of value from Alberto Vasquez's private vaults, except for one flash drive that is completely fried.

William starts trying to fix the drive, as Zoe, Mia and Connor prepare to confront John Diggle Jr. by staking out the one black market where he can fence what he stole from Vasquez.

John Jr. agrees to have a friendly talk with Connor. This turns out to be a distraction and his plan was to leave the drive behind so William could fix it, so his people could then get the drive and the information on it.

Tatsu is made out to be much less competent than she has been in the past as a sword fighter to give Black Siren a chance to save her and play the hero.

A lackluster episode that revives one of the weaker portions of Arrow's history and drags out the flash-forwards to ill-effect. There's nothing really bad about it, but there's a lot of characters it would have been better to see again than Tatsu, if only because her appearance in Hong Kong makes me wonder why a Japanese woman has made herself the protector of Hong Kong. Still, it could be worse.
Posted by Starman at 10:21 PM