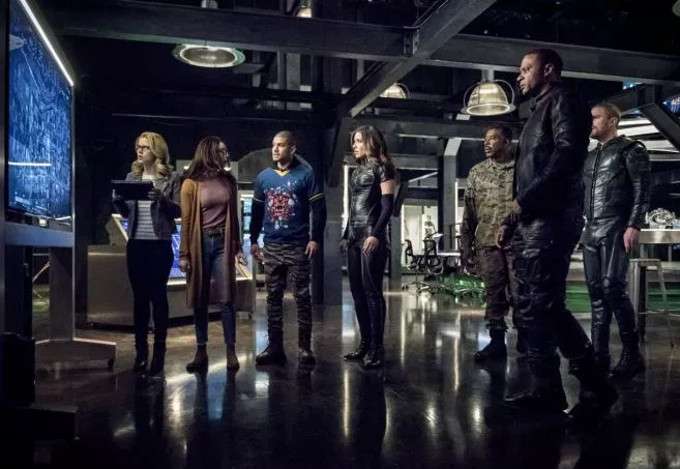 Armed with new information on the killer of Emkio's mother, Oliver hopes to turn his sister away from the Ninth Circle. Unfortunately, a sudden setback will leave Team Arrow at a disadvantage and send Diggle looking for help from an old military contact he has a bad history with. Meanwhile, Felicity is approached with an interesting offer regarding her company, only to have the Ninth Circle steal her latest invention for their own purposes.

Ernie Hudson is a fun presence as General Stewart.

Alena makes reference to a Dr. Will Magnus wanting to buy Smoak Technologies. Felicity describes him as the world's greatest expert on robotics. First appearing in Showcase #37 in April 1962, Dr. Will Magnus was the scientist who created the super-powered robots known as the Metal Men.

Diggle's stepfather is revealed to be a Marine General named Roy Stewart. It is worth mentioning that there is a long-running fan theory that John Diggle is the Arrowverse equivalent of John Stewart - a career soldier who became a Green Lantern. This would seem to confirm the idea, as it was suggested that John Diggle, on Earth-90, had become Green Lantern.

Diggle makes mention of his father dying during a secret mission to Vlatava. In the DC Comics Universe, Vlatava is an Eastern European nation with a long history of religious and sectarian turmoil. The entire country, with the exception of its president and Count Vertigo (the last surviving member of its royal family) was killed by The Spectre.

The Ninth Circle is after a biological weapon dubbed Cygnus X-1, which is said to be a bacteria that can eat through anything. This sounds similar to Mutajek 9-9 - a self-replicating biological weapon from the Green Arrow comics which could eat through any form of plastic and destroy a city in minutes. In the Where Angels Fear To Tread storyline, Oliver Queen died trigger an explosion that prevented a Mutajek 9-9 bomb from being detonated over Metropolis.

The item Virgil and his men were sent to purchase was an ARGUS vault drive, triple-level encryption or eyes-only documents

Felicity says the vault drive contains a security failsafe protocol to prevent it from being hacked that isn't the same as the ones used by ARGUS. She recognizes them as belonging to the Defense Intelligence Agency.

The Galaxy One helmet is powered by a module made of an alloy proprietary to Galaxy One. In order to access its workings, Felicity must get one of that exact make of module.

With enough pressure at a steady pace, a shoelace can saw through hard plastic.

Cygnus X-1 was meant to genetically engineer a bacteria that could consume the byproducts of nuclear fission. Instead, it created a bacteria that would eat through nearly anything.

Virgil: (eying Alena as she wields a keyboard like a club) Pistol beats keyboard, darling.

(General Stewart enters into the Bunker)
Stewart: So this is where you people work? Impressive.
Oliver: How did your men end up at Smoak Tech, General?
Stewart: Several months ago, the DIA  got wind of a Ninth Circle mole inside ARGUS. Since then, we've made it a point of tracking their activity, including the theft of that drive, which led us to your friend Virgil.
John: Wait. Wait. Wait. I thought you said you didn't know anything?
Stewart: I said I couldn't -tell- you anything.

Alena: What happened to Archer putting Smoak Tech on the map?
Felicity: Well, that was before I realized all the bad that she could do. I wanted to invent something that would help save the city, and instead I made something that can destroy it.
(Felicity freezes up in horrified realization.)
Felicity: Oh, my God. I'm a mad scientist. Oh, my God, no. It's so much worse than that. Oh, my God. Oh, my God. I'm my dad!
Alena: I am your friend who has some real-life experience working with evil geniuses, and you need to trust me on this one - you are not one of them, okay?

John: Oliver told me the truth about Vlatava... about my father. Why did you let me believe a lie? You let me hate you.
Stewart: Every child deserves to believe that his father is a hero. And believing it, you became one. If he could see you today, I know he would be so proud of you.
John: If I'm a hero It was all because of you, Sir.

Virgil appears for the first time since 714, leading the group of Ninth Circle soldiers trying to buy a high-security ARGUS vault drive.

When Felicity accidentally fries the drive before they can figure out what the Ninth Circle was after, John Diggle says he has a contact with the Defense Intelligence Agency - the DOD department who encrypted the vault drive.

General Stewart denies knowing anything about the Ninth Circle and says he can't tell them anything about what is on the drive since John lost his security clearance after he quit ARGUS.

Felicity is still trying to get Archer rebooted.

Robotics expert Dr. Will Magnus is apparently interested in buying Smoak Technologies because of Archer. Apparently it sounds similar to an AI he's been working on for years.

Smoak Technologies is attacked by the Ninth Circle and Virgil.

Felicity and Alena are saved by General Stewart's men, but the tablet holding Archer is stolen.

General Stewart lied about not knowing about the Ninth Circle and reveals the drive contained a list of DIA Special Agents in the field.

John has never gotten along with his step-father. He later tells Oliver this is due to Stewart being his father's commanding officer on a Vlatava, where he died and the report of the mission making it sound like Stewart left his men to die while escaping himself

John also says that Stewart was a harsh man, who had him and his brother run through the same Spartan-style training drills that he did as a marine in a bid to make them tougher. He said he didn't care if he was liked, so long as they were strong.

Only one of the DIA agents is unaccounted for. When Team Arrow goes after him General Stewart and Diggle are ambushed and abducted by the Ninth Circle.

General Roy Stewart has been, over the course of his career, the thrice-decorated Commander of the 1st Recon Battalion, Commandant of the USMC, the head of DARPA and Chairman of the Joint Chiefs of Staff.

According to Felicity, the botched mission where Diggle's dad died was actually a huge success and part of why General Stewart was asked to head DARPA.

The Ninth Circle wanted General Stewart for his knowledge of a project called Cygnus X-1. It becomes clear they intend to use Archer to find the DIA personnel who have access to it and follow them to steal it.

Oliver gives John the unredacted files describing his father's death. According to them, John's dad was negligent, got two other Marines killed and the only reason anyone survived was because of General Stewart's leadership.

Felicity deletes Archer rather than let it be used by the Ninth Circle.

Oliver tries to tell Emiko about Dante's setting up her mother's assassination, but she doesn't believe him.

The Ninth Circle gets away with the Cygnus X-1.

Alena makes a back-up of the root files of Archer. She says they can rebuild but Felicity argues against it. Judging by the way Alena looks at her flash-drive, she disagrees.

Emiko kills Dante, saying she learned the truth about how he arranged for her mom ti die.  He says it was to make her stronger by destroying the final piece of her old life.

Mia gives Felicity the helmet she took from the Galaxy One soldier in 718.

The bombs The Canaries stole are secure and William is making sure they can't be exploded remotely.

Roy and Dinah are setting up a perimeter around the last Canary Nest.

Felicity needs a unique power module to access the helmet. Connor and Mia go to retrieve one.

The Deathstrokes are a gang that control part of the marketplace in Central City. Only certain people can get into their territory.

Connor has a UV tattoo that allows him to go into Deathstroke territory.

John Diggle Jr. is revealed to be the leader of The Deathstrokes. Connor says that he rebelled against their parents teachings.

Before their off-camera encounter, Connor hadn't seen JJ in over a year. They used to be best friends before JJ rebelled against their father.

Mia forgives JJ for lying to her while working in his deep-cover identity.

Mia and JJ have to evade the Deathstrokes that JJ apparently sent after him.

Felicity determines the helmet connects its wearer to Archer, effectively giving them an AI-driven sixth sense. An army of soldiers with tech-enhanced armor could easily destroy the Canaries, according to Felicity.

A lackluster and largely forgettable episode, that does nothing to advance the plot until the final two minutes. Even then it doesn't really change much beyond letting us know WHY the soldiers killing The Canaries are so awesome and Dante dying... though it is unclear if Emiko is going to turn on the whole organization or use the Ninth Circle to make the whole world burn. Alas, thinking on next week's episode is more entertaining than this one.
Posted by Starman at 7:03 PM