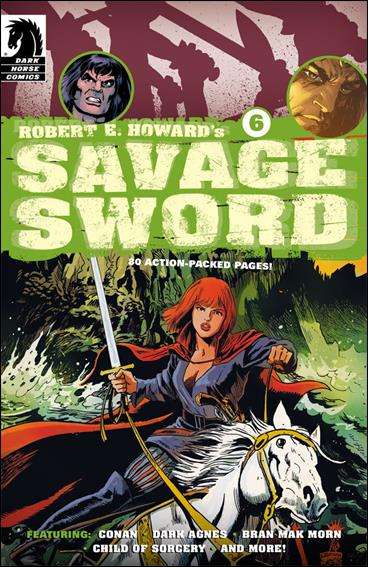 I'm several weeks overdue in covering this book, which I only discovered had come out by chance.  However, since the comic itself has not had a new issue come out for over a year, I feel little guilt over being late in covering it.  In any case, it has proven worth the wait.

Curiously, Robert E. Howard's Savage Sword seems to be migrating further away from its apparent purpose - anthologizing comics based around Robert E. Howard's less famous creations.  Yet of this issue's five stories, three are devoted to Conan the Cimmerian!  Still, one can't complain.  Even the weakest story in this volume is better than the current Conan the Barbarian comic and all of the stories contained within this volume feature top-tier talent.

Two stories continue on from the last issue.  One is the tale of Bran Mak Morn - Howard's Pictish hero.  This story by Ian Edgington sees the chieftain fighting a battle of wills against a shaman who disapproves of Bran Mak Morn's efforts to cease his peoples' barbarous practices of human sacrifice.  It is a bold tale, skillfully retold with amazing art by Richard Pace.

The other continuing story centers upon the origins of Dark Agnes - a red-haired swordswoman who had as much a hand in inspiring Red Sonja as Robert E. Howard's historical heroine Red Sonya of Rogatino.  Fans of Gail Simone's Red Sonja book would do well to pick-up this issue and Issue #5, for Dark Agnes's adventures will hold similar appeal.  The artwork by Aaron McConnell proves a skillful substitution for last issue's Dark Agnes artist, Francesco Francavilla.

The remaining three stories are equally appealing.  The issue's opening tale - Sargasso of Sand - centers upon Conan's misadventures as he gets lost in the desert and is confronted by a mad captain who seeks to make his ship sail upon the sand itself.  John Jackson Miller's script is a humorous one and the artwork by Phillip Tan lives up to his usual high standard.

The second Conan tale - Demons of the Summit -  is a fairly standard tale.  Barbarian meets girl.  Barbarian loses girl.  Barbarian kills monsters and wizards to get the girl.  Despite being formulaic, the tale is well-told and greatly enhanced by the excellent artwork of Tony De Zuniga.

The final story of the issue - Child of Sorcery - proves to be the issue's best.  Small wonder given that it is based on a story by Birds of Prey author Christy Marx with a script by legendary comics writer Roy Thomas!  Though this story also details Conan's efforts to save a woman from enslavement and defilement, the heroine is no helpless prize to be won.  The artwork by Ernie Chan is reminiscent of the classic Marvel Conan comics for all the right reasons.

In short, this book is a must read for all fans of fantasy in general and Robert E. Howard in particular.
Posted by Starman at 7:30 PM